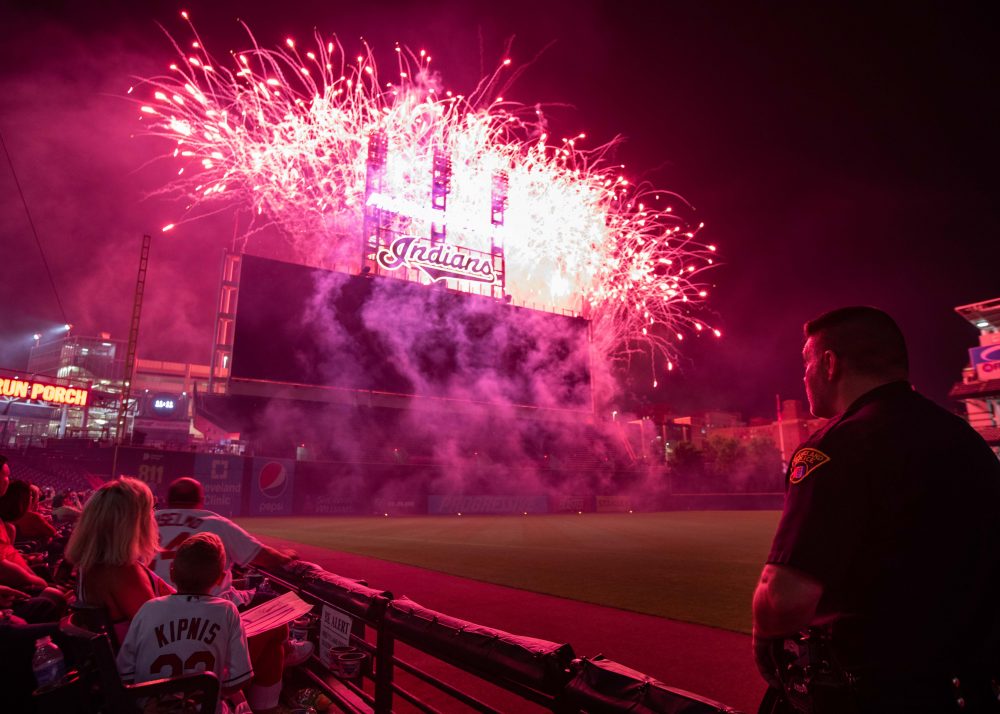 While many inhabitants of our great land headed out to barbecues and other types of parties this weekend, a lot of fun baseball was being played. For instance, the Astros and Indians played an insane four-game series. There was plenty of scoring in bunches by both teams and the series was capped off by a dramatic, extra-innings walk-off victory Sunday. But before we get to that, let’s recap this nutso series, shall we?

Houston won the opener Thursday night thanks to an offense outburst in the both the fifth and sixth innings to give them an 8-2 victory. On Friday night, Houston was down 2-0 heading into the eighth inning and well, they were ahead 4-2 when that inning ended. But they didn’t stop there. They put up a crooked number in the ninth, scoring seven runs to put them up 11-2, which was the final.

Corey Kluber started and pitched 6 ⅓ innings. He gave up seven hits and struck out seven. Houston couldn’t score against him. They decided to wait until Andrew Miller came into the game and because of his performance in the top of the eighth, he picked up the loss.

On Saturday, the Indians pulled out an 8-6 victory thanks in part to a four-run fourth inning. But the game wasn’t without some drama. Jose Altuve didn’t appreciate Lance McCullers’ reaction to a defensive miscue and he let the right hander know about it.

Jose Altuve was not happy with Lance McCullers… pic.twitter.com/EHduKBD1tF

It’s one of those unwritten rules; infielders don’t like it when their own pitchers show them up after a blunder, and it causes a little friction when it does happen–which is why you hardly see it.

In the finale Sunday, it looked as though the Astros would take the series after they staged a furious six-run rally in the eighth inning to give themselves an 8-3 lead, but the Indians would stage their own rally in the bottom of the ninth to tie the score 8-all.

The ninth-inning rally started with a 17-pitch at bat by Jose Ramirez against Ken Giles, featured six singles and ended with Ramirez lining out to Yuli Gurriel to send the game into extras.

Evan Gattis broke the tie in the top of the 13th with his second home run of the game:

Yonder Alonso answered back with a solo shot of his own in the bottom of the 13th:

After a scoreless top of the 14th, Brad Peacock replaced Collin McHugh and Greg Allen stepped up to the plate. Peacock threw his first pitch and Allen sent it into the right field seats to give the Indians an improbable 10-9 win.

It was Allen’s first walk-off home run and his season longball of the season.

The Mariners walked off for the fourth time this season against the Twins on Saturday night. This time, the hero was Mike Zunino who clubbed his 12th home run against Twins reliever Matt Magill in the bottom of the 12th.

Mike Trout went ham against the Yankees on Saturday in an 11-4 win. He accomplished something he had yet to do in his already stellar career: club five hits in a game. He went 5 for 5 with three doubles and a home run. He also hit an infield single in his last at-bat of the night.

Trout became the first Angel to have a five-hit game since Cameron Maybin went 5 for 6 in a game against the White Sox on May 16, 2017.

The Brew Crew is on a roll. After a series win against the Mets, they’ve won 13 out of their last 17 games. The Mets won the first game Thursday and the Brewers won Friday, Saturday and Sunday in different fashions.

On Friday night, they won on a walk-off walk.

On Saturday afternoon, they won with an explosion of seven runs in the seventh inning and went on to win the game 17-6.

And on Sunday afternoon, it was more of the same when the Brewers rallied, once again, in the seventh inning scoring four runs leading to a 8-7 win.

This also happened on Saturday:

Dan Jennings threw a 69 mph pitch to avoid balking while Adrian Gonzalez was at the plate. (Nice.)

There were a few trades this weekend and the Rays were involved in a couple of them. First, the Rays and Mariners made a deal that saw Denard Span and Alex Colomé head to Seattle for prospects Andrew Moore and Tommy Romero. The Rays are also sending some cash to the Mariners; $4.75M which should cover about half of what both Span and Colomé are owed in this season. Next, the Rays made a deal with another team out west, the Oakland A’s. The A’s sent pitcher Wilmer Font to the Rays for minor league pitcher Peter Bayer. It was a bold move by the A’s—just kidding. This is the second time Font’s been traded this season. He was traded from the Dodgers to the A’s in April.

On Sunday, the Padres and Twins made a deal that sent veteran right hander Phil Hughes to San Diego for Janigson Villalobos. The Twins also sent cash and the 74th pick in this year’s MLB draft. Hughes was DFA last week even though they still owe him $22 million on his contract which runs through 2019. The Twins needed a catcher because Jason Castro suffered a season-ending knee injury.

Sunday marked the much anticipated matchup between Shohei Ohtani and his fellow countryman Masahiro Tanaka, only Ohtani wasn’t on the mound. Manager Mike Scioscia decided between the series between the Yankees and Angels to move Ohtani back so he wouldn’t have to pitch against New York. The booing you heard was from my house. But just because Ohtani wasn’t on the mound that doesn’t mean we were rid of Ohtani. He was the designated hitter Sunday against Tanaka.

Tanaka twice handled him with strikeouts, including here:

Ohtani finished the game 0-2 with a two walks and two strikeouts—he worked a ninth inning walk against Aroldis Chapman.

Lost in the madness of the Indians’ furious comeback and win on Sunday was this play by Astros reliever Chris Devenski. The game’s eventual hero, Greg Allen, hit a pitch that bounced off Devenski’s leg. Devenski went after the ball in foul territory and was able to get the out at first.

There’s a full slate of games on Monday with more than half of them starting during the day. The Astros and Justin Verlander will be in New York to face the Yankees while David Price looks for his second straight win against Toronto who is paying a visit to Fenway this week.

There’s one interleague game in Baltimore between the Orioles and their neighbors the Nationals. Gio Gonzalez will match up against Alex Cobb. And the Mets are down in Atlanta to face Brandon McCarthy and the Braves.

Monday’s nightcap is an 8:00 p.m. ET start in Los Angeles between the Dodgers and Phillies. Vince Velasquez is looking to even his record at 5-5 while Brock Stewart is looking for his first win of the season.