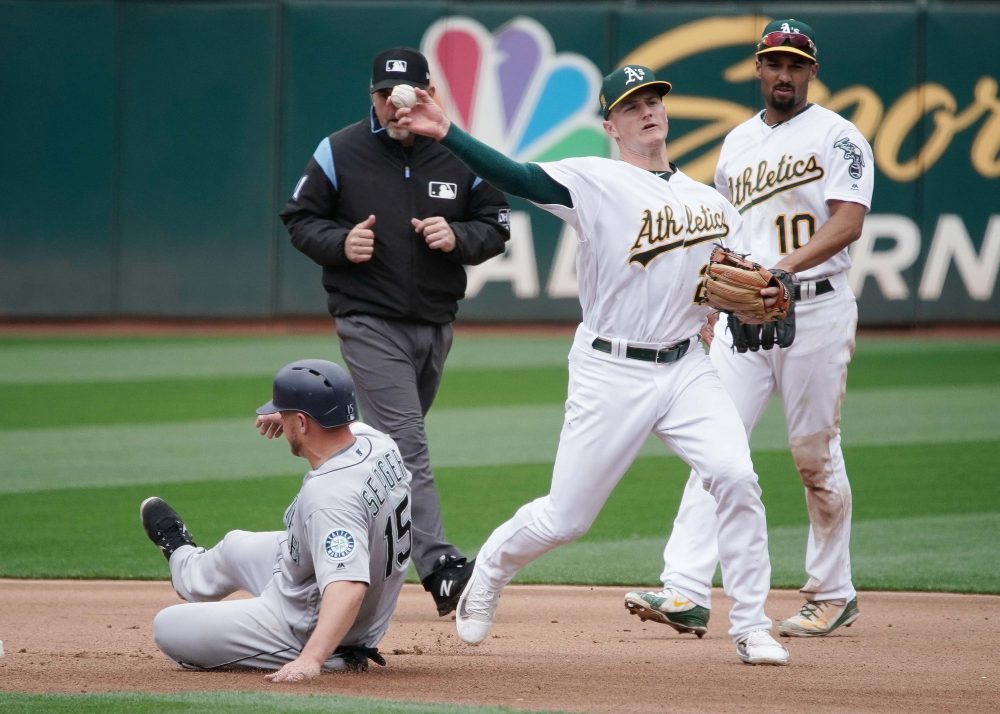 Felix Hernandez went six innings against the Oakland Athletics on Thursday afternoon but it’s safe to say that he probably wants the first inning back. That’s because, while five of those six innings he threw were of the scoreless variety, the bottom of the first inning went about as bad as it could’ve gone for him and the Mariners.

The A’s broke out for four runs to come out of the gates flying. The Mariners went into the bottom of the first inning up by a run, but they ended it down three runs. Oakland manufactured the first run via two singles, some deft baserunning and a sacrifice fly. The big damage came from Stephen Piscotty, who brought home two runs after he hit a deep fly to left center that evaded the outfielders who attempted to catch it.

*We can’t verify that he actually said that pic.twitter.com/4SGTb9gURy

Piscotty was brought home by Dustin Fowler on a single and that ended Felix’s terrible, horrible, no good, very bad first inning. From that point forward, it was a slow crawl back into the game for the Mariners. They picked up another run in the second inning to make it 4-2 but every time they had a shot at really getting something going, the A’s would just turn a double play on them.

In fact, Oakland turned five double plays Thursday. The fifth was the biggest one of all and of course, it was started by Matt Chapman. Chapman has been busy establishing himself as one of the best defensive players in the game and this play was a demonstration of why he’s being held in such high regard right now.

The double play, which was nearly a triple play, was basically the final nail in the coffin for the Mariners on the afternoon, as Blake Treinen got the final four outs of a bullpen day for Oakland. The A’s might not have won the series but they were duly rewarded for some individual moments of excellence on the afternoon.

After giving the Pirates all they could want and then some before eventually falling in 12 innings the day before, the Reds showed up to their home ballpark ready to ruin Pittsburgh’s day. This time, they achieved it, as they got out to a five-run lead after five innings and eventually held on to a 5-4 win.

Four of those runs came on a single swing, as Eugenio Suarez continued his run as one of the lone bright spots on this Reds team, hitting a grand slam in the third inning to give Cincinnati four of its five runs on the day.

How about a Suárez slam to start your day? #RedsCountry pic.twitter.com/6QsRQ7Xjrz

Meanwhile, Luis Castillo kept the Pirates off the scoreboard for five of the six innings he threw, and while Pittsburgh did make it close at the end, things were never really in that much doubt for Cincy in this one.

There were only eight games played Thursday and, of those eight, five of them weren’t really all that dramatic–all decided by five runs or more. So, unless you were a fan of the winning teams, Thursday wasn’t the best day for you.

There was still some cool stuff on display, though! For instance, Mike Trout continued his world tour of baseball excellence by hitting a home run against the Blue Jays, all for the entirety of Facebook to witness. He even got a “shooter’s bounce” of sorts from the wall in order to help the ball leave the park.

While that was going on, Dylan Bundy was busy putting on a masterclass of a pitching performance against the Chicago White Sox. He threw a complete game while only giving up two hits and a walk. Unfortunately, one of those two hits was a three-run bomb from Jose Rondon but I’d say that the Orioles would be pleased with the 14 strikeouts that came with it as well.

The Mets easily beat the Brewers 5-0 off the strength of a four-hit day (and a 24-hour cycle!) from Brandon Nimmo. However, Zach Davies would probably consider himself the big winner of the day. Early in this game, there was a scary moment when a comebacker seemed destined to hit Davies right in the head.

Fortunately he got his glove up and was even able to record the out to end the inning. Things could have been much worse there!

Things were close between the Astros and Cleveland for about five innings, then the sixth inning arrived and the Astros offense did that thing that we’re used to seeing. You know what I’m talking about — that thing where they put a crooked number on the scoreboard. Alex Bregman was the main culprit, as he hit a three-run dinger to put Houston in the lead in the fifth inning and then his RBI double in the very next inning was the capper on what ended up being the deciding inning between these two clubs.

The rainmaker in the sixth inning was Jake Marisnick, as he hit a three-run dinger of his own to really break the game open.

The Royals picked up an 8-2 win over the Rangers and there was an incident in the second inning that was basically an omen that things were not going to go Texas’ way in this one. During that frame, Ramon Torres hit what should have been a routine single up the middle. Unfortunately, Delino Deshields made an absolute meal of it in shallow center and let it roll through his legs nearly to the warning track. This gave Torres enough time to speed across the basepaths and score a two-run Little League home run.

If you’re the Rangers in that situation, then you probably know that you’re going to be in for a long night if that type of stuff is going on.

Denard Span actually didn’t make any of the catches that you’re about to see in the video below. With that being said, the Rays did beat the Red Sox 6-3 and the hustle factor from Span has to be applauded after he ended up in the seats twice in one game while trying to make catches in foul territory.

Both pitchers are off to very good starts so far, with Cole actually sporting a 1.41 DRA and a cFIP of 72 over 10 starts so far this season. The spiciness in this matchup comes from the fact that Bauer still holds a bit of a grudge against Cole due to some comments that Cole made back in their college days. Let’s just say that Trevor Bauer will be pitching like he has something to prove to his counterpart.

Trevor Bauer & Gerrit Cole will square off on Sunday in Cleveland. There’s history there. Bauer opened up about that, facing the Astros and more.

“We had a rocky relationship in college, because he told me that I had no future in baseball.”https://t.co/DLQFCtkqtD

You need to be logged in to comment. Login or Subscribe
baseball_jen
Awesome that people are starting to notice Matt Chapman's talent! Thank you for highlighting him. He's like Eric Chavez but better & with more power IMHO. And Chavy won six consecutive GG's at the Hot Corner ... he'll probably never remain in Oakland - his agent is Boras. Even with a new stadium in the works its doubtful which is sad but happy to have him for now at least! Thanks again for letting people know (the majority of baseball fans dont know anything about Oakland ... if they didn't grow up A's fans in the Bay but we are used to it!) who Chappie is. Although he's so good he wouldn't have remained a secret for too long! 😊👍⚾
Reply to baseball_jen