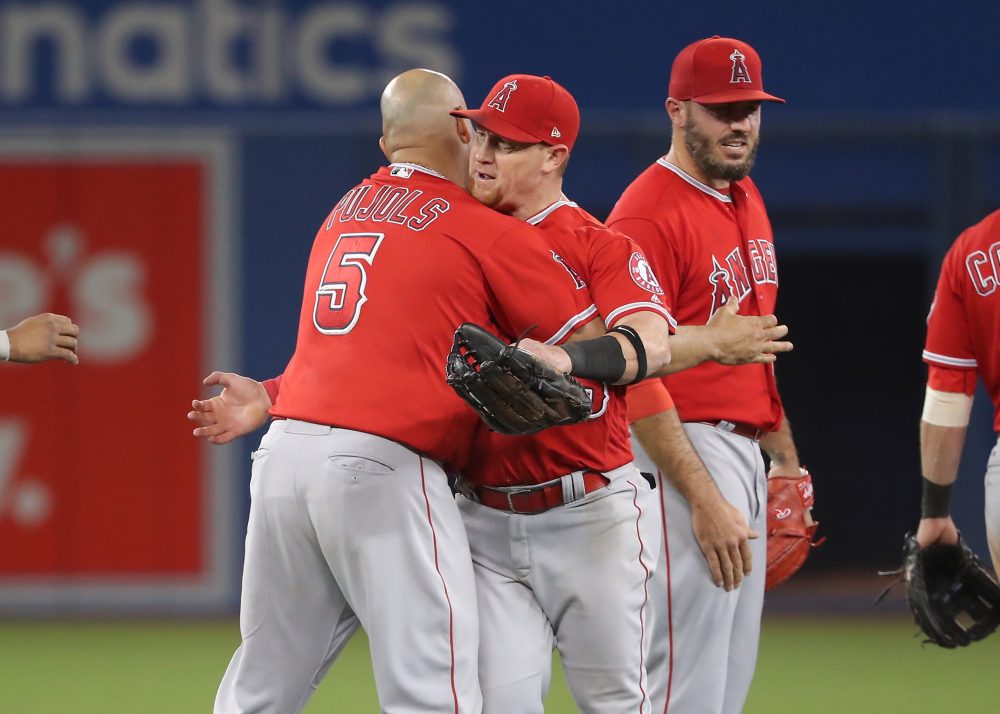 When Tyler Clippard induced a lineout from leadoff man Ian Kinsler in the top of the ninth inning of Wednesday’s Angels-Blue Jays game, the Jays’ chance of winning the game stood at an estimated 96.2 percent. A two-run gap with two outs to play doesn’t often translate to an exciting finish, and the more casual fans in attendance could be forgiven for trying to beat the rush to the parking lot. Those prudent fans missed an awful lot this time, though—and if you know one, you should mock them mercilessly for it.

With one down, Clippard walked Mike Trout—hardly the worst thing a pitcher can do, especially given the amply cushioned situation. Even when Trout stole second base it wasn’t like disaster seemed imminent to anyone in the park. But then, Clippard walked Justin Upton. And Albert Pujols after him, to load the bases.

There are all sorts of two-run leads. Sometimes, a two-run lead feels safe enough that you can say the team leading will win over 96 percent of the time. Sometimes, the tying run is already halfway home, and you’re staring down the barrel of a base hit tying the game. Sometimes the difference between those two leads can be just a couple of batters.

Shohei Ohtani’s face, despite being fresh to Major League Baseball this year, is not one you want to see in the batter’s box when trying to pitch your way through that second scenario from above. Ohtani took ball one, and Clippard threw what probably should’ve been ball two if Ohtani hadn’t chased it. But it didn’t miss the plate by enough to be unhittable, and Ohtani dumped it over the middle of the infield to score Trout and Upton, tying the game:

Ohtani then stole second base, putting himself into position to score on Andrelton Simmons’ single. The Angels turned a two run gap into a two run lead in the top of the ninth—but the game wasn’t over yet.

Dwight Smith Jr. pinch hit for Giovanny Urshela to lead off the bottom of the ninth, and he greeted Blake Parker to the game with a single. Up next, Curtis Granderson pushed him up to third base with a double. It was the Angels’ turn to experience how quickly a comfortable two-run lead can turn into a two-run lead that feels like a house of cards.

Kendrys Morales was next up, pinch hitting for Devon Travis, and he sent the house of cards toppling to the table with a base hit to center. Smith scored, cutting the lead to one, but Curtis Granderson stopped at third base instead of testing Mike Trout’s more-than-capable arm. But when Teoscar Hernandez lifted a high fly to right field, Granderson found himself racing the arm of Kole Calhoun to tie the game, instead:

After putting Josh Donaldson on first base intentionally, Parker set Justin Smoak down on strikes to end the game. The Angels surrendered both home runs hit in the game, but won the game with baserunning, timely hitting, and a spectacular outfield assist—not to mention Tyler Clippard’s ongoing command struggles.

The weather in Arlington for the Yankees-Rangers game was hot and humid—ideal conditions for hitting baseballs harder and making them fly farther. Enter Aaron Judge: someone who is already pretty good at hitting the ball really hard and super far:

The blast was officially measured at 471 feet, and it gave the Yankees a 10-5 lead—but this was the last of their scoring, and the Rangers tallied off seven more runs to win 12-10.

The Twins’ Brian Dozier hit the ball just perfectly—perfect exit velocity, perfect launch angle, perfectly slight amount of pull—to wedge it between two of the more worn outfield wall cushions. He missed the home run by about sixteen inches, but got a fantastic story as his consolation prize:

John Andreoli will probably be the last member of the 2011 draft class to make his Major League debut. After seven years in the Cubs’ system, including the past three all spent at Triple-A, Andreoli moved to the Mariners’ organization this offseason as a minor-league free agent. On Wednesday night he saw his first big league action, and collected his first big-league hit:

Andreoli’s not a prospect but he’s got great wheels and he’s slowly grown into a passable hit tool. And with the Mariners’ depth being tested by multiple losses he’s finally getting the chance he’s waited so long for. Andreoli finished 1 for 3 with a walk in his MLB debut.

The Kole Calhoun throw was certainly the most consequential defensive play of the night. But we’ve already covered that highlight. Plus, who doesn’t want an excuse to watch Andrelton Simmons make a play that no human being has any right making?

If you play context into it, there’s no question the Calhoun throw was better. But if you go off of which play looked more awesome, it’s obvious that Simmons made the play of the night. But regardless, the Angels—and baseball fans in general—already made out great thanks to some truly special defense.

Quiet Thursday is a day of rest for fourteen MLB teams, but that still leaves eight games spread out across the afternoon and evening.