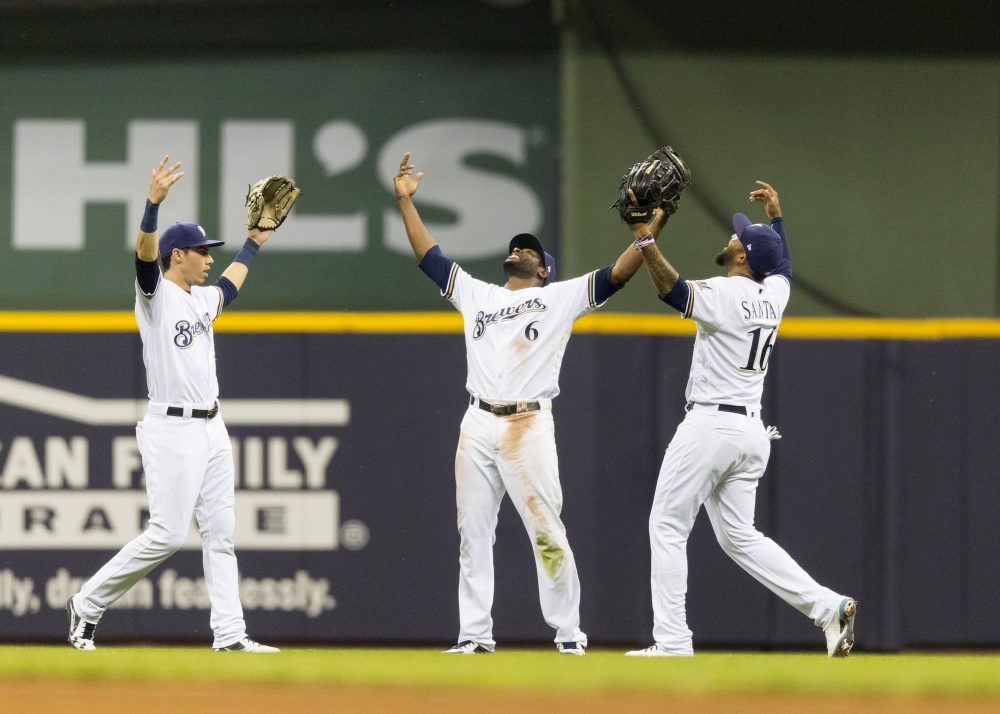 Remember when the Arizona Diamondbacks couldn’t lose? It seems like only, oh… about two weeks ago that they were tearing through the National League, winning (or at least not losing) series after series. They won nine straight series to start the year, and if you include splits, went 11 straight series without losing more games than they won until May 10-13, when they were soundly swept by the Washington Nationals.

Since then, the script has been flipped, as they say. Including that Nationals series, the Diamondbacks have lost 12 of 13, including a 1-0 shortcoming Tuesday against the Brewers, which also happened to clinch their fourth consecutive series lost.

It was a pitcher’s duel—as you’ve undoubtedly already noted to yourself when you read the score—between the unlikely pairing of Matt Koch and Jhoulys Chacin, but the game would have likely included a bit more offense if not for the heroics of one Jarrod Dyson.

Domingo Santana, the victim of such thievery at the hands of Dyson, would have his vengeance just two innings later when he hit a less dramatic sacrifice fly to bring home the game’s lone run.

On the flip side of the Diamondbacks’ struggles, the win for the Brewers was their fifth in their past six games, and 14th over 20. They haven’t lost back-to-back games since suffering a four-game sweep at the hands of the Cubs in late April. One of the reasons? A bullpen that features the gangly, floppy-haired brilliance of one Josh Hader.

Ever imagine what Chris Sale’s career would be like if the White Sox had kept him in the bullpen? Like that, I’m guessing.

Speaking of Sale, the Red Sox ace vs. the No. 15 prospect in our Top 101 making his major-league debut was a pleasant surprise. How did it go, Willy Adames?

Seeing a top prospect homer in his first game is always cool, but man did Sale give him an absolute cookie—a 90 mph heater right down the damn middle. Rays manager Kevin Cash took some of the fun out of the promotion by telling reporters before the game that Adames would only be up for a few days while Joey Wendle is on the paternity list. Hopefully he won’t be back down for too long.

As for the rest of the game, Sale was Sale, striking out nine with the Adames dinger his only blemish, and Mookie Betts continued to do basically whatever he feels like doing, crushing a three-run homer for his 16th of the season and raising his OPS to 1.211 with a 2-for-4 day.

While the Diamondbacks losing streak means they’re not longer in first place; the Colorado Rockies are. But what it also means is that the left-for-dead Los Angeles Dodgers are lurking. And while it’s still faaaaaar too early to be watching the standings, they’re only 4 1/2 games out of first place in the NL West despite a 21-27 start, and have the best run differential in the division after a 5-3 win over those aforementioned Rockies.

This one was of the comeback variety, with Chris Taylor and Yasiel Puig going back-to-back off Bryan Shaw in the sixth to put the Dodgers ahead. They’ve followed up a six game losing streak by winning five of six, and the formerly struggling Kenley Jansen has now tossed eight straight scoreless appearances with seven strikeouts and zero walks in that span.

Gerrit Cole was merely “average” Tuesday in a start against the San Francisco Giants, but average for Cole nowadays still means eight strikeouts and just two earned runs in six innings of work. Cole and the Astros won easily but not before Houston’s ace was bested by his own brother-in-law.

Michael A. Taylor, your RBI double in the bottom of the ninth sent you and your Washington Nationals teammates home winners! How do you feel?!

Taylor heard that people were making fun of lack of obvious emoting, so he took to social media and let everyone know how much he really cared:

*Sigh of relief and praise Jesus*
"Thank you Lord" https://t.co/RmTtJtmVdB

OK, but enough about Taylor. What did Juan Soto do? The wunderkind didn’t homer (bummer) but instead went a ho-hum 1-for-1 with THREE walks. Oh, and Bryce Harper did this.

Joey Bats is a Met now (or, again, technically). The Metropolitans signed him early Tuesday and inserted him in their lineup immediately, batting fifth and playing left field against the Marlins. He acclimated himself quickly.

It didn’t matter, though, as Bautista’s double was one of only four Mets hits on the night as the Marlins won 5-1.

The Marlins are the only team in the NL East that isn’t above .500. That they’re not above .500 isn’t surprising, but it might surprise some to know that the Braves and Phillies currently sit atop the division. The two surprising early contenders did batte in Philadelphia, and Ozzie Albies continues to be cool as hell.

The Braves have the best record and best run differential in the National League.

Speaking of surprising teams doing battle in the same division, the Mariners and Athletics are also both above .500, somehow, and Oakland seemed well on its way to an important win over a division rival until Mike Zunino intervened.

A 3-2, 10-inning win almost made us forget that the Mariners aren’t allowed to have nice things, so in addition to placing Dee Gordon on the disabled list earlier in the day, Mitch Haniger and Jean Segura were also banged up.

No Cano, no Cruz, no Gordon, no Haniger. Mariners still win 3-2.

If Jarrod Dyson didn’t give you your fill at the top, may I submit for your approval Alcides Escobar, doing his best to provide value in any way possible.

Zack Godley tries to help the Diamondbacks avoid the sweep at the hands of Brent Suter and the Brewers. The other Astros ace, Justin Verlander looks to continue his dominance against Jeff Samardzija, who is whatever the opposite of an ace is, and the Giants. But the main event is David Price, who you might recall was once traded by the Rays (for Willy Adames, actually!) taking on his former team and Chris Archer, who will undoubtedly one day be traded by the Rays.

You need to be logged in to comment. Login or Subscribe
Llarry
Can we PLEASE stop with the auto-playing video? Leaving aside any page performance considerations, by the time you read down the page, the later videos have moved on to entirely different clips, so you don't get to see whatever was talked about. If I want to watch a clip, I can click on it.
Reply to Llarry