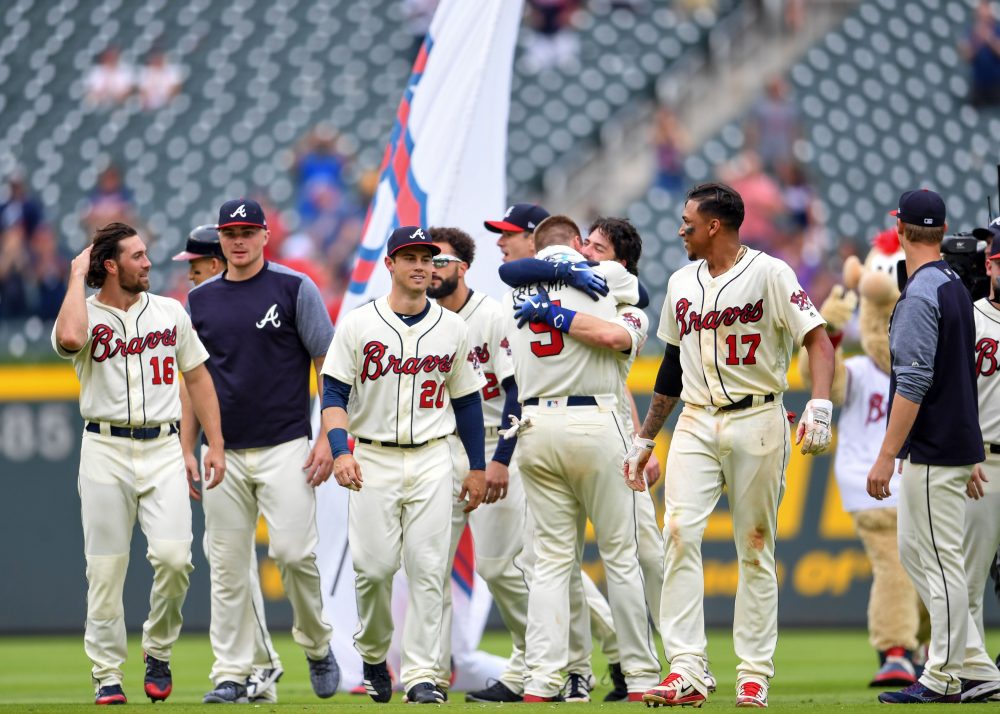 So how about the Braves? It’s May 21 and they’re in first place in the National League East with a 28-17 record. They’re 9-3 since May 8, and Sunday in beating the Marlins 10-9, they pulled off a feat that hadn’t happened yet this season.

Let’s set the stage. It’s been a kind of lopsided game with the visiting team having an explosive six-run fourth inning. The home team scratches its way into scoring four runs. Unfortunately the visiting team scored three more. So now the home team finds itself down five runs heading into the bottom of the ninth. There’s no way they can come back and win, right? Wrong.

The Marlins called upon Brad Ziegler to close out the bottom of the ninth and, well, it didn’t go so great. He was able to strikeout Dansby Swanson to start the inning and probably felt good about that, but pinch-hitter Ryan Flaherty walked and Ozzie Albies hit a single to advance Flaherty to third. No big deal? The Marlins were up by five; it’s OK if the Braves scored one. And hey, maybe the submariner Zeigler could get Ronald Acuna to hit into a double play. Nope. But he did hit a sac fly that scored Flaherty, pulling the Braves within 9-5 so the Braves had one on and two outs.

Surely, Zeigler could get out No. 3 before they scored four more runs. Right?

Marlins manager Don Mattingly has seen enough and calls upon reliever Tayron Guerrero to close it out. Tyler Flowers is up next and Markakis steals second. If Flowers hit a single to score Markakis from second, I would have laughed but he didn’t. He broke the scoring pattern by walking. So the Braves had men on first and second with two outs. Kurt Suzuki pinch hit for A.J. Minter and joined the RBI single party by pushing Markakis across and advancing Flowers to third. Johan Camargo is next and, Guerrero uncorks a wild pitch that advanced the runners to second and third. Another hit could win it for the Braves. With first base open, Guerrero walked Camargo. It wasn’t intentional and pitching coach Juan Nieves came out to talk to Guerrero.

Swanson, who started the very long inning with a strikeout, hit a 2-2 pitch from Guerrero and, you guessed it, delivered a single that scored Flowers and Suzuki to win the game.

So the red-hot Braves shock the hell out of the poor Marlins, who probably can’t believe what they just saw.

No one expected the Braves to be as good as they are right now. We’re a quarter of the way through the season and they’re not showing any signs of slowing down. The team hasn’t made the playoffs since they lost in the 2013 National League Division Series against the Dodgers so their fans are very excited by this hot start and rightly so.

Mike Axisa of CBS Sports tweeted on Sunday that the 2018 Braves are like the 2017 Yankees and if that’s true, I guess the Braves will lose the NLCS in seven games? We’ll check back in October.

Brewers reliever Josh Hader is striking out a lot of batters so far this season. In 27 ⅓ innings, he’s struck out 56 for a ludicrous K% of 59 percent. He’s also only walked seven.

He picked up the win Saturday against the Twins. Pitching on four days of rest, Hader struck out six and walked one in 2 ⅓ innings of work. Those strikeouts were the last six outs of the game and they all came swinging. He fanned Eddie Rosario, Eduardo Escobar and Logan Morrison in the bottom of the eighth. Robbie Grossman walked, somehow, to lead off the bottom of the ninth but Hader struck out Mitch Garver, Ehire Adrianza and Bobby Wilson to end the game.

Max Scherzer continues to be Max Scherzer. On Saturday, in what turned out to be a loss for the Nationals but not for him, Scherzer struck out 13 Dodgers in seven innings. It was the seventh time in 10 starts he reached double-digit strikeouts this season. He now has 104. Scherzer is the fastest to 100 strikeouts in a season.

As for the Nats, they didn’t fare so well this weekend. And that’s after they didn’t play for three days due to inclement weather. They played five innings against the Yankees on Tuesday and the game was suspended by rain. They scheduled the resumption of that game for Wednesday and it was supposed to be followed by the regularly scheduled game, but it rained again and both games were postponed. After a day off Thursday, their game Friday against the Dodgers was rained out.

They ended up getting swept by the visiting Dodgers. They lost the doubleheader on Saturday and lost Sunday afternoon.

J.D. Martinez hit two home runs Sunday in the Red Sox’s win over the Orioles. He now has 15 total and is tied with teammate Mookie Betts for the league lead.

Cardinals starter Jack Flaherty had himself a day Sunday against the Phillies. The 22-year-old set a new career-mark in strikeouts with 13 and earned his first big league win. He became only the third Cardinals pitcher under 23 to strikeout at least 13 in an outing. He also threw 120 pitches before being lifted in the eighth for Jordan Hicks.

Hicks was throwing heat against Odubel Herrera. He reached 105 mph on the gun twice. His other pitches were clocked at 104.3, 104.2 and 103.7. They were the five fastest pitches measured so far this season by Statcast.

The home crowd was oohing and ahhing at the radar readings on the scoreboard as were the broadcasters covering the game. His teammates were in awe watching him from the dugout. Flaherty joked after the game saying, “I wish I could throw 105.”

Hicks became the second pitcher to reach the 105 mph mark since pitches were tracked. Aroldis Chapman was the first.

Aaron Hicks hit an inside-the-park home run in the Yankees’ 8-3 win over the Royals on Saturday. It was one of five homers the Yankees hit against KC.

Sergio Romo started two games this weekend for the Rays. He started Saturday with three strikeouts in the first inning and was lifted for reliever Ryan Yarbrough. On Sunday, he pitched 1 ⅓ innings, walking two and striking out three before being relieved by Matt Andriese. The Rays had five pitchers throw Saturday in a 5-3 win, and had four pitchers Sunday in a 5-2 loss to the Angels.

Sergio Romo is the first pitcher to start a game, throw at least one inning and leave without allowing a run, then do the same thing the next calendar day since Dick Rudolph shut out the Reds on back-to-back days September 24th & 25th, 1914. (according to my b-r research)

Now that Shohei Ohtani is back on his regular schedule of pitching every Sunday, I figured we should devote a whole section to him.

So what did he do this Sunday? He dominated the Rays and salvaged the last game of the series for the Angels who were fighting off a sweep at the hands of suddenly hot Tampa. He gave up two runs and six hits while striking out nine in 7 ⅔ innings. He surrendered a solo shot to my new favorite baseball player Johnny Field who was featured in last week’s edition of WYNTK. Field didn’t have to pitch on Sunday (he just had to hit and field). Ohtani set down 12 Rays in order from the top of second through the top of the sixth. Wilson Ramos singled to open the top of the seventh and end the streak.

Is Javy Baez a wizard? Yes, he is. He’s a defensive wizard. Just look at this play he made against the Reds on Sunday afternoon.

I mean, come on. And he made it look so easy too.