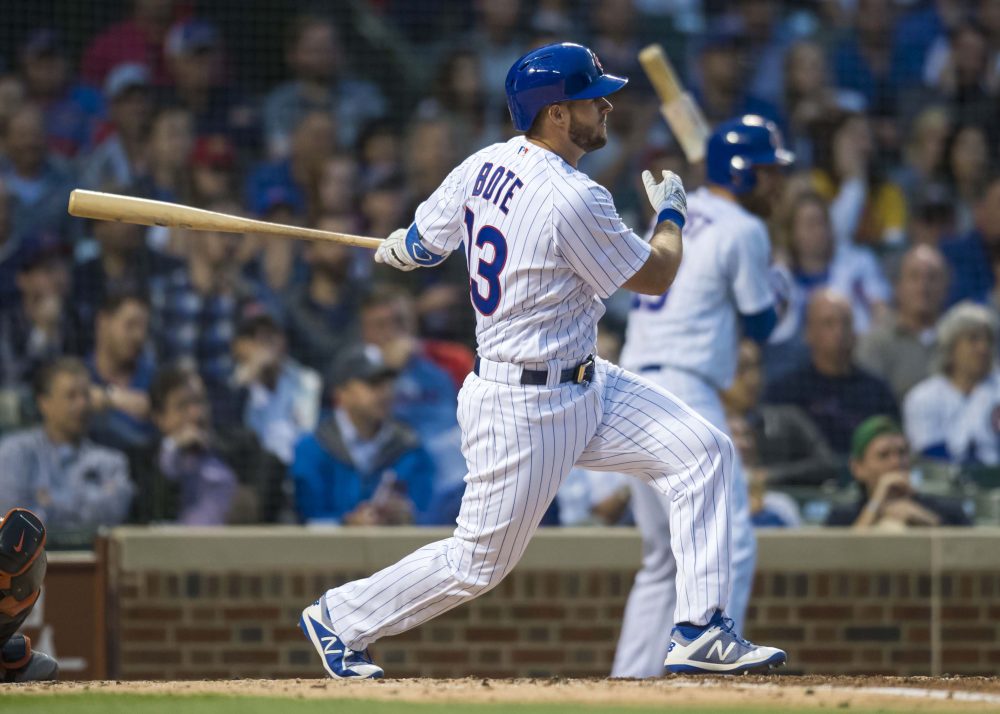 Matt Strahm and David Bote are hardly established big-league stars, but even as their MLB careers dawn they’re established sabermetric darlings. Eno Sarris of The Athletic called Strahm the Padres’ secret weapon this spring. At the same outlet, Sahadev Sharma wrote about Bote’s Yandy Diaz-like effort to maximize the value of his talent for hard contact by hitting more line drives, all informed by the Cubs’ internal analytics and player development team.

Bote is particularly interesting, to Cubs fans and to those interested in how the summer trade market might unfold, because his emergence could lead the Cubs to feel comfortable moving on from Addison Russell or Ian Happ in order to acquire Manny Machado before the deadline—or make him an attractive trade chip himself.

Both the Cubs and the Royals (who developed Strahm into a big-league arm prior to trading him to San Diego last summer) got far more than they paid for, too. Bote went to Chicago in the 18th round of the 2012 draft; Strahm fell to Kansas City in the 21st round. The median outcome for players in those rounds is a cup of coffee in full-season minor-league ball. Only three players from Bote’s round have reached the majors, and only two from Strahm’s have done so.

That Strahm and Bote would happen to be drafted so close together (and that they would then go on to be among the few who Made It) is especially interesting, because in so doing they have become two of only three Neosho County (Kansas) Community College Panthers in MLB history, and the first since journeyman hurler Paul Lindblad (1965-1978). It’s a good bet, though, that these two won’t be the last Neosho alumni to matriculate, because unlike Lindblad (who just happened to be from Chanute, Kansas, where NCCC is located), Bote and Strahm are part of a budding, miniature powerhouse—and their path from Neosho to the majors is considered more viable than it once was.

Since Bote and Strahm (and teammate Adam Giacalone, whom the Brewers took in the 16th round in 2012) were chosen, four other players have moved on from Neosho and (sometimes after a stopover in Division I baseball) been drafted and signed by MLB teams. Come June, the list of Panthers in pro ball is likely to get a name or two longer, still.

Neosho head baseball coach Steve Murry is in his 32nd season on the job, and has a managerial record of 1,009-638 (.613). Over the last 25 years, since he really got the program honed to his liking, his teams are 860-490 (.637), with numerous Kansas Jayhawk Community College Conference championships and NJCAA World Series appearances. He’s made almost a family business out of this: his son went through the program, then on to a four-year college, then on into the Rockies’ farm system, and his pitching coach is his son-in-law.

“We need good kids, first and foremost,” Murry told me, by way of summing up his recruiting philosophy. “We’re here in a town of 10,000 people, and people care. They love our team, and they want to know that we’re bringing in young men they can be proud of. We will sacrifice talent for character. We have to.”

Once those high-character players are in the door, Murry and his staff can provide a real and valuable opportunity for them to improve, in a highly competitive environment. They have their long track record of success with which to recruit, and they have better facilities than the typical small-town Midwestern junior college. Still, they’re not going to have their pick of the litter. Landing players like Strahm (from North Dakota) and Bote (from Colorado) speaks to the quality of the program Murry has built, but it happens almost by accident.

“We wanted [Bote] out of high school,” Murry recalled, “but he took the opportunity to go to Liberty University [in Virginia]. Well, after a semester there, they cut him, and they basically told him not only that he wasn’t a D-I player, but that he wasn’t an infielder. So he called me and asked if we would have room for him, and we did, and he became our shortstop, and the rest is history.”

Bote would spend only his freshman year in Neosho, before the Cubs scooped him up. He batted .419/.480/.626 in 228 plate appearances, played both middle infield positions, and stole 20 bases in 21 tries. He jumped off the page for the Cubs, who (like many teams) sent scouts to Neosho games mostly to see Strahm and Giacalone.

“That happens a lot,” Murry said, adding that because of the way he builds his program and the priorities he sets, “they know if they come and see one of our guys and like him, that he’s a good guy.”

Increasingly, character matters to teams, and it’s not just because they want to avoid embarrassing incidents or career-derailing off-field issues. It’s because, starting with the very year that Bote, Strahm, and Giacalone were drafted, player development has closed the gap on scouting and become the most important part of most organizations’ efforts to produce valuable, homegrown talent. Teams have better tools than ever with which to foster growth from players. They also have ever stricter and less competitive constraints on the amount they can spend to acquire amateur talent.

Thus, we’re seeing teams spend far more money and time on coaches and resources that can turn guys like Bote from a nice bit of versatile organizational depth into a potential big-league regular. In Bote’s specific case, that took the form of Cubs staffers showing him that he was hitting the ball hard enough to generate meaningful power, if he could just make the adjustments of timing and approach that would permit it. Bote took all that information and ran with it.

Strahm’s was a different situation.

“Matt was a top out at 84 kind of lefty, tall, lanky, the arm worked, it was free and easy,” Murry said of the player he brought in from a North Dakota high school. “We really liked some of the things we saw. He didn’t have great command then, obviously, but we had something to work with.

“What’s interesting was, at his very first scrimmage, Matt was topping out at about 79,” Murry recalled. “I went over to him and said, ‘Look, we may be wasting your time and my time, if that’s all there is. You’re really going to have to compete here.’ But that was all he needed. The next time out he was sitting probably 83, 85, and the next time 86, and the next time 89, and the rest is the rest.”

There was no great mechanical fix; Strahm just needed physical development and an understanding of the level of competition he would see from then on. Murry believes one of the biggest things he can offer is that awareness, that challenge to players who were stars in their high school conferences but weren’t given an immediate shot at an NCAA level. He encourages them to tap into their competitiveness and embrace the difficulty level they encounter at the junior-college level, and finds that many of them are able to raise their game once they do so.

“I don’t know about all this launch angle stuff,” said Murry, who doesn’t deliver much in the way of analytics to his charges. “We just want our guys to have a good at-bat, hit the ball hard, and let the rest take care of itself.”

The rest doesn’t always take care of itself, but big-league teams and instructors can certainly take care of it. That’s why, as player development practices improve, Murry believes teams are more eager to look into players like the ones with whom he’s won so many games.

“You look at a David Bote, and at the major-league level, in a pinch, he can probably play all four infield positions, and either corner outfield spot for you,” Murry said. “And he can really hit. That’s very valuable.”

Good makeup, stout fundamentals, competitive maturity, and a certain baseline of athleticism and versatility go a long way when a big-league team evaluates an amateur player in 2018. Murry isn’t reinventing the wheel, and there’s no flood of future first-rounders or All-Stars ready to pour into or out of Chanute, but this tiny junior college has turned out some big leaguers and will probably turn out more. That’s a stirring testament to the hard work of Bote and Strahm, to the principles and program of Murry, and to the way the process of selecting and onboarding young talent is changing throughout MLB.