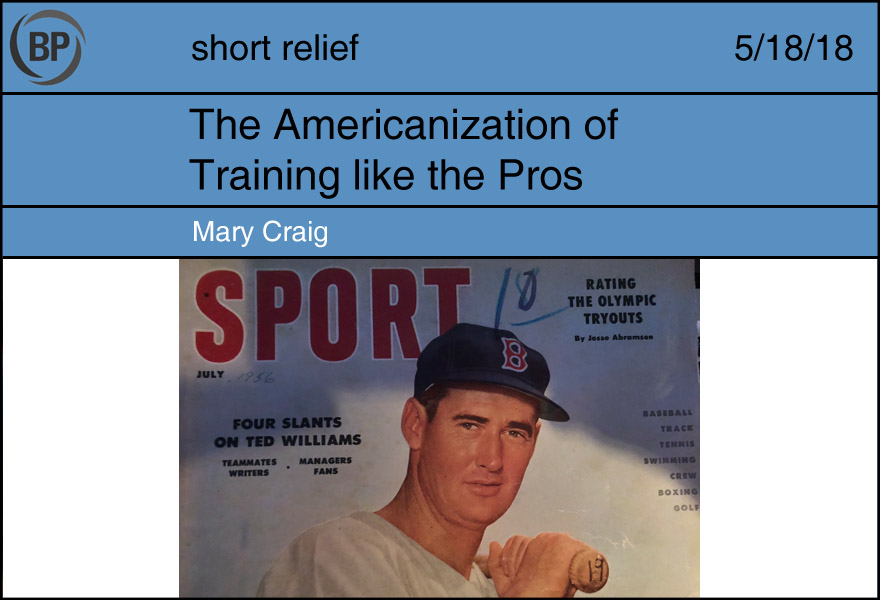 In many ways, the history of Major League Baseball acts as both love letter to and commentary on American society, imbibing both its best and worst elements and reflecting them back to the public. The precise degree to which Major League Baseball encompasses the American psyche is likely something that cannot be arrived at quantitatively, instead being analyzed qualitatively through various pieces of memorabilia passed from generation to generation.

On Tuesday, I found one such piece of history: the July 1956 copy of SPORT Magazine. Though the edition features a number of stories on the game’s biggest stars and up-and-comers, from Ted Williams to Don Blasingame, all of them seemed far too mainstream to be worthy of a Short Relief article. Instead, what caught my eye was the whimsy of a column-long advertisement for a number of exercise booklets.

This and similar ads were published between 1955 and 1960 in SPORT and Boys’ Life, advertising the National Sports Council’s compilation of exercises titled “the Conditioning Course of Great Champions.” These booklets boasted the ability to turn the common person into a world-class athlete with just 15 minutes of specially-designed exercises per day. Signed on to endorse this product and pass on their tidbits of wisdom were some of the country’s most well-known athletes from all disciplines, including Joe Louis, Whitey Lockman, Bob Cousy, Ted Kluszewski, and Yogi Berra. 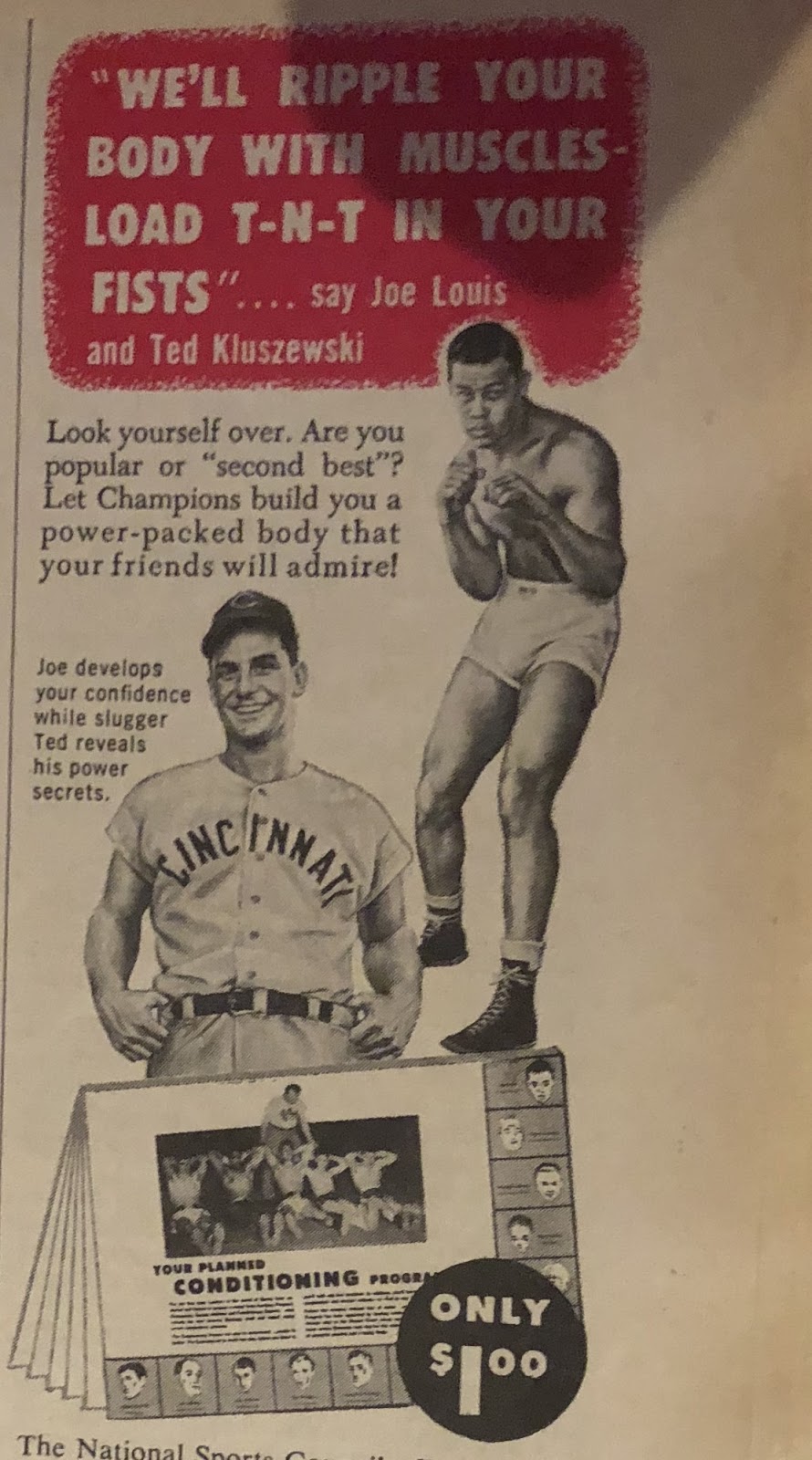 Although physical fitness occupied the majority of the ad, it also offered subscribers a number of supplementary booklets containing tips for improving one’s mental strength and agility, drawing on the fundamental idea that all that separates the exceptional from the ordinary in America is opportunity. For just $1 and 15 minutes per day of practicing the secrets of success, one could become physical and mental equals with one’s sporting heroes.

Of course, the irony is that the ad is placed within an article espousing the uniqueness of Ted Williams’s talent. As crucial as it is to believe one could become a hero, it is equally important to view American heroes and equal to none. Despite lasting just five years, these advertisements joined a much longer tradition of instilling such paradoxical thinking in the American public, offering yet another glimpse of the relationship between baseball and American identity, elitism and democracy. 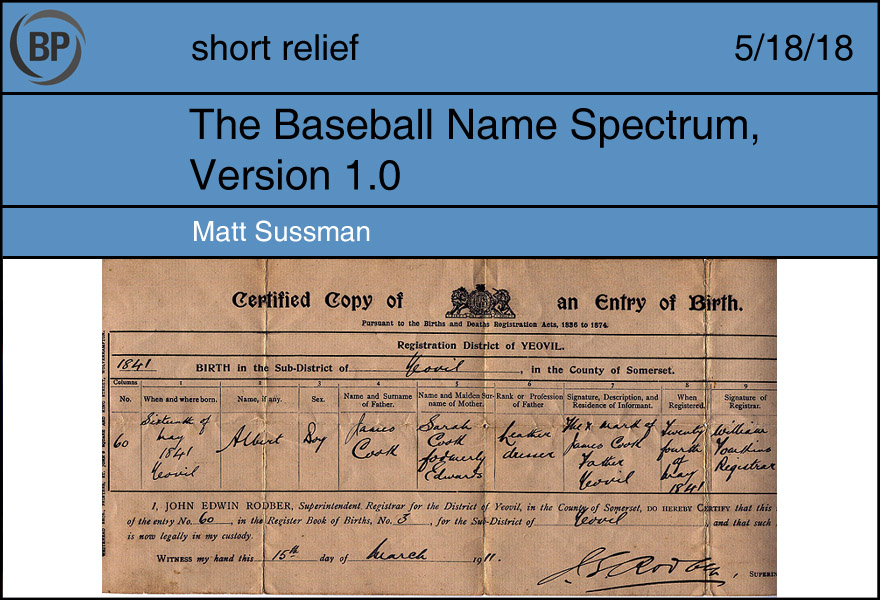 I want everyone to turn their books to the page with the essay called “Understanding Baseball Names” by J. Evans Pritchard and rip it out.

The MLB Draft, if you don’t follow serious prospectin’, is basically the best place to discover brand new names. Cash Case. Dustin Hurlbutt. Who has any idea what position they play? What does it matter? College baseball is then the cesspool that feeds us those names and lists come out all the time on the best ones. Itchy Burts was the winner of this particular linked list; Itchy, of course, is a nickname, and David Burts wouldn’t carry quite the same colloquial clout as No. 2 on the list, Lars Nootbaar, which is also great.

But it’s important to understand that all names fall onto the same graph as the political compass. Sometimes it’s the first name; sometimes it’s the last. A combination of the two can truly elevate the moniker. Some “first names” are but nicknames, while others are simply ethnic — these are two sides of the same coin.

Which brings us to the Milton Bradleys and Randy Johnsons of our time; this scale really doesn’t do them justice as their otherwise common names don’t stand out without each other. They exist in graphical purgatory until their worth can be correctly calculated.

This is just scratching the surface, but it’s a start. At some point we will need to add in other metrics; such as a prorated bonuses for alliteration, spoonerization, and relevance to their specialization (the Bob Walk Factor). Most of this is to say, nicknames are fine but they aren’t “great names.” Boog Powell is a nickname and the other Boog Powell is simply just the same nickname and no relation, arrest him. 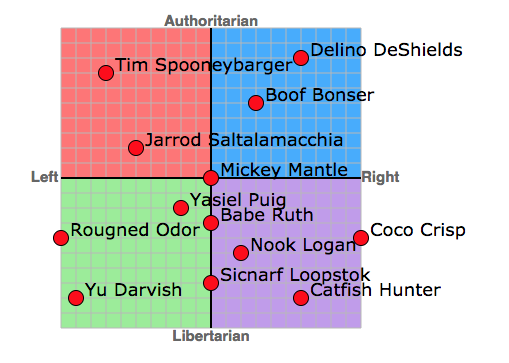