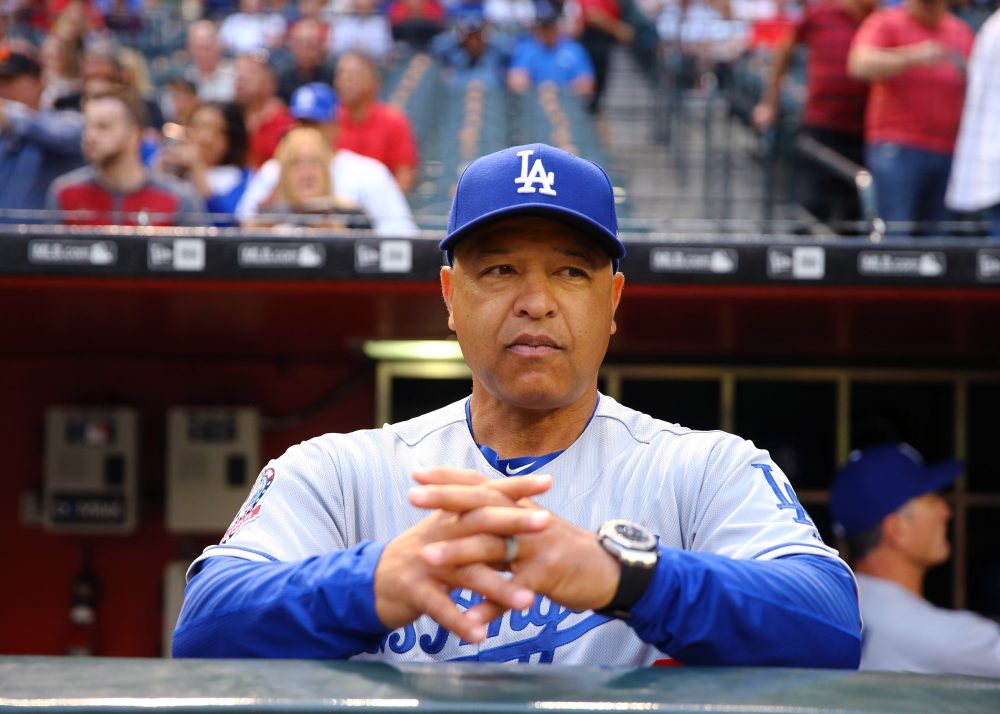 On Wednesday night, the supposedly lowly Marlins beat the supposedly mighty Dodgers for the fourth time in five tries this season, and the two teams’ records stood (for about 17 hours) at a matching 16-26. You’ll recall—perhaps not exactly, but generally—that the Dodgers were projected by PECOTA to win 97 games in 2018 (second-most in MLB), and that the Marlins were projected to win just 65 (tied for the fewest).

The sky in the world of Dodgers fans was falling, only in small part because of the terrifying symmetry with Miami. In larger part, the panic stemmed from the health of Clayton Kershaw and Corey Seager, and the struggles of Cody Bellinger and Chris Taylor and Yasiel Puig, and whatever is or was up with Kenley Jansen. And the standings. In largest part, it had to be the standings. The Dodgers were not just 16-26. They were in last place, percentage points behind the Padres in the NL West, 8.5 games behind the Diamondbacks and even a touch further behind the Brewers in the far off—but seemingly fading—NL Wild Card race.

If you had whispered a prophecy of this 42-game opening chapter in a Dodgers fan’s ear over the winter, they would have either punched you in the face, laughed, or resolved to sleep until 2019. It would have been a cruel, cruel slice of the future to offer them. It would have been true, of course, but incomplete. There are bad times, there are good times, and there are times in between that make a much bigger difference than we realize. We excel mostly at identifying the extremes in isolation, which the beginning of a season makes too easy.

So before your Dodgers fan slips into a hibernation of despair, be sure to relay these tales of the past. It will make their future/present less dreadful.

Justin Turner has been out the whole time.

This should at least provide some modicum of explanation to the future-stricken Dodgers fan. Maybe hold off on mentioning Kershaw and Jansen.

Playing at the same pace as the Marlins means basically nothing.

Last season, every team that lost 95 games (the White Sox, Tigers, Phillies, and Giants) had a 42-game stretch in which they won more games than the Astros did over their worst 42-game stretch, an 18-24 run somewhere in their incredible championship march.

It’s not unusual for a terrible team to out-play a good team over its worst stretch. This is baseball. The archetypal Marlins beat the archetypal Dodgers more than 30 percent of the time, all the time. It’s just rare for things to be juxtaposed this starkly.

42 games is an arbitrary amount of time.

It had to be said. Also, the Dodgers have now played 43 games, and they won the most recent one. Who can keep up?

Uh, OK, we’re going to get back to the cheery part in a second. Promise. So, first, very few teams earn 95-plus win projections from PECOTA. From 2008 to 2017, only eight teams had such lofty expectations—three of them being the 2014, 2015, and 2017 Dodgers. The polarization of talent in 2018 led to four teams garnering the label, including the Dodgers.

The Dodgers haven’t been as bad as their record indicates.

No one would blame you for going ahead and marking the Dodgers down as a “no” for 95 wins, or for meeting their projection. That’s not the same thing as declaring their season dead, though. And it’s certainly not … whatever this is.

It is my professional opinion that in six short months, the Dodgers have gone from being the best team in National League to the worst.

To truly assess where the Dodgers are now, and where they’re likely headed, we have to drill at least a bit below the wins and losses. If you’d like, BP can take you deep, deep into the details of a team’s true performance. We’re going to go just to the very most basic next step: Run differential. The Dodgers entered Thursday’s game vs. the Marlins having scored four fewer runs than their opponents, in total. The Marlins had scored 75 (!) fewer runs than their opponents.

By the time they won Thursday’s game, 7-0, to improve to 17-26, the Dodgers had a positive run differential. Sure, a .500 record wouldn’t have been a dream start either, but the pitchforks wouldn’t be out for Dave Roberts, among others.

The postseason is within striking distance.

I’ll draw your attention to those 2009 Rockies. Like this year’s Dodgers, they started off with the fourth-worst record in baseball through 42 games (17-25, in their case) but a barely negative run differential. They later ripped off a 31-11 stretch (several of them, technically) where their dominance was so apparent that everyone got to enjoy it for what it was.