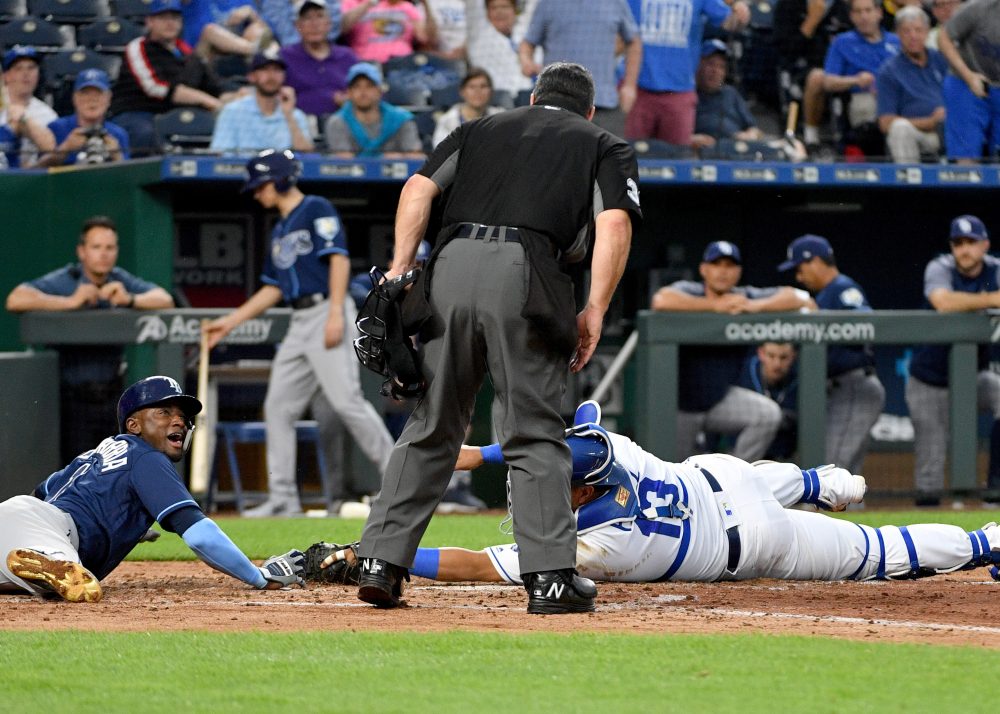 The Royals and Rays were given the honor of a nationally broadcast game on ESPN. This seemed rather strange. Every team should be given national exposure, of course, but ESPN is in the business of making money. A Royals-Rays game doesn’t exactly scream “Come watch our show and consume the ads we make money from,” no? An unexpected move to be sure.

It was a welcome one, though. The audience was treated to a dreary 2-1 game in which both teams looked like the Rays and Royals. The deciding run, however, scored on the most spectacular of plays.

This is the sort of video every youth baseball coach would want to show their kids and talk about not giving up on a play. Adeiny Hechavarria skirted around Salvador Perez, played hand-tango with him while on his belly, and scored.

They don’t teach that in the minors, and they don’t teach it in the majors either. It’s the sort of play that’s born out of pure feel and athleticism. The Rays are still bad, and the Royals are still bad. Both are going to be sellers at the deadline. This one moment gave us some of the best baseball of the day, and for now, that’s awesome.

This isn’t notable just because Tyler freaking Saladino hit an inside-the-park home run. A.J. Pollock sprained his thumb on this play, which is profoundly bad news for the Diamondbacks.

That’s 13 homers for Albies, a small middle infielder who nobody predicted would have this kind of power. There’s a conversation to be had about plus hit tool guys adding some loft to their swings to tap into power, but this is nuts. He and Ronald Acuña are going to be problems in the NL East for years to come. The Braves won again, and they might be headed for the playoffs if this keeps up.

Mark Canha is you. Mark Canha’s glove is your attempt to pull off something cool. J.D. Martinez’s home run ball is life smacking you in the face and telling you to stay in your line.

Ah, the futility of life. All of us are doomed to fail.

Ender Inciarte is a wizard. He makes things look easy that are not at all easy. He learned how to do this at Hogwarts. It is the only explanation.

The comments will now be filled with the name of the American wizarding school JK Rowling created on Twitter, because that’s how the Internet works. It’s fine. Life goes on.

Get your dose of afternoon baseball with Rockies-Padres at 3:40 p.m. ET. The Rockies have some decent players in Nolan Arenado and Charlie Blackmon, sure, but the Padres have Franchy Cordero. Odds are your afternoons aren’t Franchy enough. The San Diego Padres: Get Franchy.

We’d recommend Yankees-Nationals for your East Coast game so that you can see if Bryce Harper will tag team with the Yanks to open a rift in the dinger-space continuum, but Max Scherzer is pitching tomorrow, so you’ll be wanting to save your strength. Opt for A’s-Red Sox instead.

Then in the evening, watch the Terminator version of Gerrit Cole try to work his way around Mike Trout, Shohei Ohtani, Andrelton Simmons and Justin Upton. The subtly fun Jaime Barria will go for the Angels, and he’ll have his hands full with the, ya know, reigning champions.