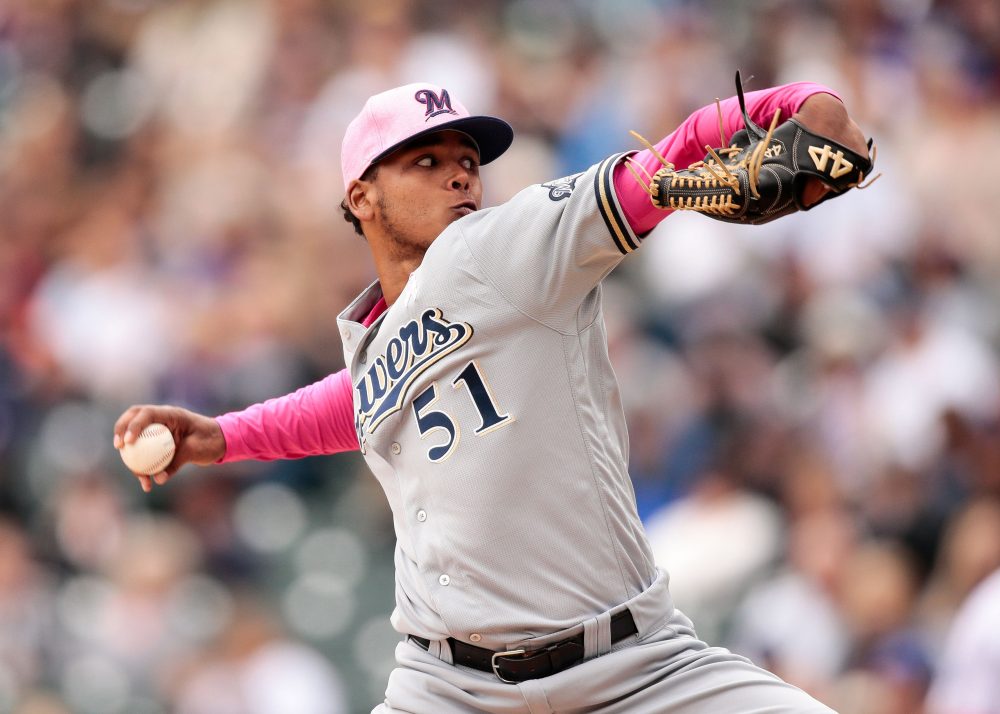 It was a special Mother’s Day for the mother of Milwaukee Brewers prospect Freddy Perata who had come to the U.S. from the Dominican Republic to watch her son pitch in Colorado Springs for the Triple-A Sky Sox. Peralta’s family had never seen him pitch professionally so this was going to be a special occasion regardless of where Peralta pitched–but then Chase Anderson got sick and the big club needed a starter for Sunday. So instead of suiting up at Triple-A, Peralta headed to Coors Field to suit up for the Brewers. His family followed.

Prior to today, Freddy Peralta’s family had never seen him pitch professionally. Safe to say that they’ll be catching more games going forward. And, of course, Mom gets the 13th strikeout ball. #MothersDay #MILatCOL pic.twitter.com/6ci7ixxWkS

As Peralta made his debut, his mom, his dad and his girlfriend sat in the stands cheering him on. And what a debut it was. Peralta struck out 13 and didn’t allow a hit until David Dahl singled in the sixth inning. After Dahl’s single, Peralta struck out Charlie Blackmon swinging and Craig Counsell came out to get his young pitcher. Peralta’s impressive first day was over.

He walked off the mound to cheers from visiting Brewers fans in the Coors Field stands and from his family who traveled very far to see their son pitch and were rewarded with a stellar outing. Peralta’s 13 strikeouts are the most in a debut by a Brewers pitcher, surpassing Steve Woodard’s mark of 12 set back in 1997. Of his 13 strikeouts, 12 came on his fastball.

After the game an excited Peralta spoke with reporters about his parents being at his debut.

#Brewers Freddy Peralta talks about his parents being there and all those Ks in MLB debut. pic.twitter.com/APwHRd89S0

What a lovely Mother’s Day present for his mom. She is finally able to watch her son pitch professionally and not only is he called up to the Majors but he goes on to have one of the best debuts in his team’s history. Don’t you just love stories like that?

The Blue Jays won just one game this weekend against the first-place Red Sox, but at least they made it an exciting one. Chris Sale, the Red Sox starter on Friday night, struck out 15, pitched nine innings and he picked up a no-decision because he allowed Blue Jays catcher Luke Maile to tie the score in the bottom of the seventh with a homer. The score would remain tied until the bottom of the 12 when, you guessed it, Maile came up to the plate with a runner aboard and Red Sox reliever Brian Johnson on the mound. Johnson had walked Curtis Granderson on four pitches and Maile crushed the first one he saw to center field.

Jacob deGrom had a strange welcome back from the DL on Sunday afternoon, only lasting one inning against the Phillies. He issued walks to Cesar Hernandez, Aaron Altherr and Odubel Herrera to start the game, struck out Rhys Hoskins, got Carlos Santana to ground into a force at home, and he struck out Maikel Franco to escape the inning with no damage. Well, the damage was to his pitch count, which reached 45 and replaced by Robert Gsellman in the second inning. The Mets weren’t going to take any chances with deGrom’s elbow.

And here’s a fun fact from ESPN Stats and Info: deGrom became the first pitcher to start a game, pitch an inning or less, throw at least 45 pitches and not allow an earned run. At least since the earned run became a statistic in 1913. The 45 pitches also is his career high for an inning. His previous high was 37, on July 2, 2014 in a game against the Braves in his rookie year.

Matt Harvey made his much-anticipated debut with the Reds on Friday night against the Dodgers and he looked good. He gave up a hit in the bottom of the second which should have been caught but right fielder Scott Schebler lost the ball in the lights and it dropped between him and center fielder Billy Hamilton, and Cody Bellinger motored into third for a triple. It was Harvey’s only blemish. He pitched four innings of one-hit ball.

Harvey threw 55 pitches (32 strikes), struck out two and retired 12 of 13 batters. It was a good debut for the former Mets star who was traded last week while the Mets were in Cincinnati. The Red went on to beat the Dodgers 6-2, not only because of Harvey but also thanks to a four-hit night from Scooter Gennett.

Orioles’ pitching prospect David Hess had a nice debut in a 6-3 win over the Rays on Saturday afternoon. It was the first game of a doubleheader and he was optioned down to Triple-A Norfolk after the second game, a 10-3 loss, but he according to Brittany Ghiroli of MLB.com, he’s eligible to come back whenever the Orioles need him. He doesn’t have to stay in the Minors for 10 days like most players would.

Hess only struck out three Rays but he utilized the defense behind him and did not issue a walk in a 78-pitch, six inning outing. He surrendered three runs on six hits and gave up a home run to Matt Duffy.

That really loud collective groan you heard from the Pacific Northwest was because of this hit by pitch in Detroit that they watched on TV:

Then, not too long after that, there was another sound emanating from the Pacific Northwest but this time it was collective yell of, “NOOOOOOO!” because Robinson Cano will most likely need surgery.

My boy Shohei Ohtani is back on his Sunday pitching schedule and I couldn’t be happier. I really missed writing about him. On Sunday afternoon, Ohtani faced the Twins and had another phenomenal outing. He lasted 6 1/3 innings, gave up a run, three hits, walked two batters and struck out 11. He didn’t factor into the decision because the Angels had to walk off for a victory in their series finale against Minnesota.

First here’s Ohtani setting down the Twins with ease.

And here’s Zack Cozart walking things off for the Angels.

The Orioles beat up on the Rays 17-1 on Sunday afternoon and in the grand tradition of most blowout games, a position player pitched! This time, Johnny Field, who plays right field, came in to pitch the bottom of the eighth for the Rays. More like Johnny Pitch, right? Right???

Field, whose name sounds like one of those generic players you’d see in an old baseball video game that couldn’t get the rights from MLB to use real player names, came in and pitched a scoreless inning, of course. He got Trey Mancini, Chance Sisco and Jonathan Schoop to fly out while walking Jace Peterson in between. Not bad.

Defensive play of the Weekend

Yankees’ reliever Dellin Betances made a nifty behind the back grab on a comebacker by Matt Joyce in the eighth inning against Oakland on Sunday.

The play looked even niftier with those fly Mother’s Day themed cleats.

What To Watch on Monday

Sean Manaea will be facing the Red Sox again. He no-hit them April 21 at Oakland. This time, he’s matched up against Rick Porcello in Fenway Park. Games tend to play differently in Fenway. Methinks a second no-hitter would be a really tall order. In fact, Manaea will probably give up a hit to his first batter. Don’t bet any money on that though. (7:10 p.m. ET)

The Astros are rolling into Anaheim to face the Angels—but not Shohei Ohtani—for a three-game set, with Lance McCullers Jr. starting things off against Andrew Heaney. McCullers is looking for his sixth win. Houston is a game ahead of Anaheim in the AL West standings. (10:07 p.m. ET)