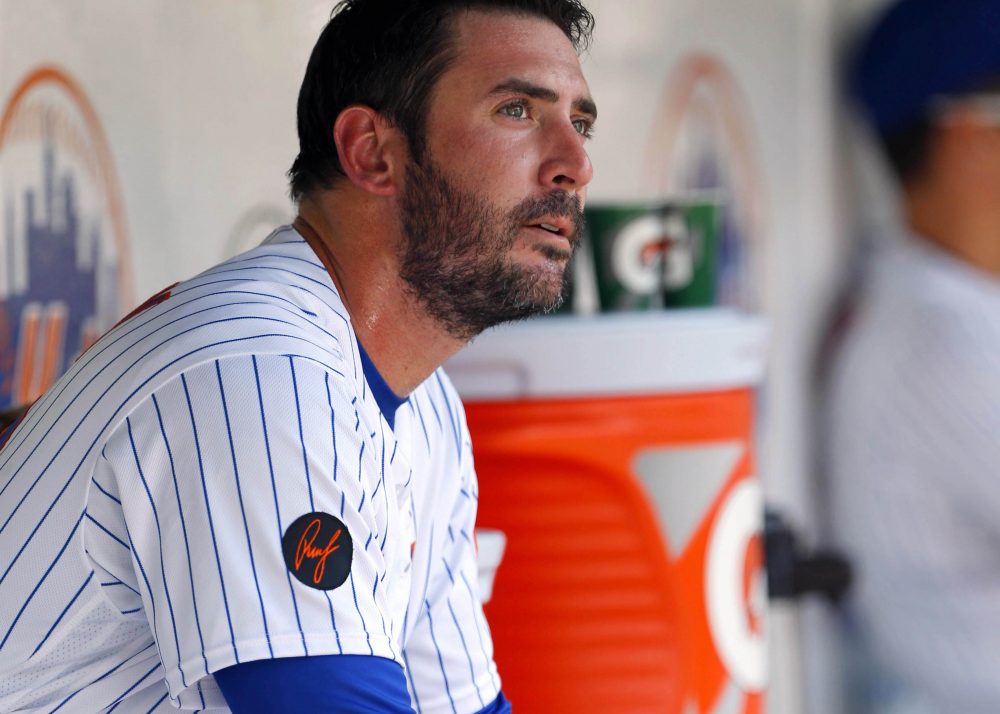 First, the important stuff: the picture of Harvey on his player page here at BP is one of the most jarring things I’ve ever seen. Yes, quite often the photo-shopped uniform changes are striking and not entirely familiar, but Harvey’s leap across the color wheel from Mets blue and orange to his new eponymous red hits you straight in the cornea and drills straight back to your brain. After all, perhaps no player has been as synonymous with the Mets in the 2010s as Harvey. Injury has derailed his once-promising career, and now he’ll find himself in Cincinnati (or possible Louisville) as he attempts to claw his way back.

The odds of that happening in Ohio or Kentucky or anywhere else simply aren’t that great. Harvey’s early-career excellence was predicated on incredible velocity, a hard slider, and the ability to work his dominant stuff up in the zone where he overpowered his opposition. After his 2013 Tommy John surgery, the stuff didn’t look quite the same and his performance suffered. After his 2016 thoracic outlet syndrome recovery, the stuff hasn’t even looked close. In just under 120 innings during the past two seasons, Harvey’s earned every bit of his 6.77 ERA, striking out about the same percentage of hitters as Reds pariah (and fellow injury case) Homer Bailey has … while giving up more dingers than his new appropriately-named staff comrade.

The Reds currently have by far the worst pitching staff in baseball, but Harvey would make it even worse if he intends on pitching to this level. In order for him to be viable big leaguer, something has to change. The Mets gave Harvey every chance they could for him to succeed in the rotation, and he’s paid them back with a series of cringe-worthy outings punctuated by the occasional “well, maybe he could be on the way back” moment. Mostly, he’s stopped getting swings and misses, seen his command backslide, and left far too many pitches up and over the plate before the ball went up and over the fence.

They finally demoted him to the bullpen after a few ugly starts this year, but the Dark Knight saw little of the velocity bump some pitchers see after such a conversion, and didn’t look any better in shorter stints. (Of course, had they attempted the move in, say, spring training, perhaps the greater structure could’ve paid dividends.) In his current state, Harvey is borderline unpitchable except in mop-up duty. So why would the Reds take a gamble on a poor starting pitcher who didn’t take to the bullpen and has a history of discontent? Because he’s Matt Harvey, once a pitcher who seemed the living manifestation of the words screw you and a former bona fide ace.

There have been so many stories of pitchers who spontaneously pop their velocity, develop a new high-spin breaking pitch, or find a new approach, why wouldn’t you try to fix this man when you have so little left to lose? There’s so much that looks off about Harvey—the injury recovery, the command issues, the velocity, or even the simple inability to drive with his legs the same way he used to—that perhaps the player development staff thinks that if they could just fix one aspect of his mechanics or mindset, they can at least turn him around a little. After all, is there anything left to break? And if Harvey makes a few ripping comments to the media, is that such a big deal when it might distract from the fact that no National League team is quite as bad as the basement-dwelling Reds? At least they’re trying something.

Too much has been made of Harvey’s frustrating ways with the media, the Mets’ front office, his teammates … basically the entire world. When you’re successful, those things are charming quirks, and when you’re unsuccessful, those things are chemistry-killing personality defects. As a fringe major leaguer, one might expect the field staff in New York, Cincinnati, or anywhere else will have little patience with anything Harvey does to “cause trouble,” but that’s not the real story here. If he can recover some of his 2012-2015 magic, no one will care, and the Reds’ staff will transform this buy-low opportunity into some form of value for the future. Either Harvey will prove himself an asset and the Reds can extend his tenure, or they’ll ship him off for another kind of value. But the likelihood of a positive outcome is still very low, based solely on his dodgy arm.

If you’re part of the second-worst team in baseball, sometimes all you can do is try a couple of Hail Mary-style moves and hope for the best. If there’s a five percent chance that Harvey can be rejuvenated into some sort of facsimile of his 2015 self, then the Reds have picked up an asset they can use. However, the problem is that five percent might be too high of a real-world likelihood, and the downside of this move includes media travails and clubhouse revolts, not to mention three-inning, five-run outings. The Reds are bottoming out and Harvey’s bottoming out, but only Cincinnati is guaranteed to ride the wheel back up sometime, someday. The Dark Knight Rises was a fun film, but it sure ain’t predictive of the second half of this pitcher’s career. —Bryan Grosnick

In 2014, the former top prospect finally had a breakout season after being handed the reins to the everyday catching job, and he displayed exceptional power, a solid hit tool, and a keen eye at the plate. Posting a .333 True Average is no mean feat for anyone, let alone a backstop who also had the unenviable task of maintaining a crouch for about two-thirds of a season. In his follow-up season, he suffered a pretty serious hip impingement—you know, one of those injuries that not only hurts your offensive output but pretty much makes catching a living hell­—that the Reds handled rather oddly. They tried to work around it, offering limited rest before attempting to convert him to the outfield. The experiment found little success, and Mesoraco went under the knife to correct the hip issue.

The next year, he went back behind the plate, but then it was shoulder surgery that was needed. And a broken foot this year. And, well, you start to get the picture. Despite all the offensive tools in the world, he hasn’t been able to stay healthy enough to continue his development or hit to his full potential. In other words, Mets fans can relate to this; Mesoraco is a better-hitting, worse-defending version of Travis d’Arnaud. Like TdA, Mesoraco eventually ended up losing a deserved starting job to someone who could simply show up and perform adequately. There’s reason to think he can still hit a little bit, but his hit tool appears to have regressed without regular playing time, even though vestiges of his power and approach still remain.

The bigger issue is his presence behind the dish; while never good defensively, the arm and blocking have slipped, and it no longer looks like his bat could carry him to a regular role at a different position. In other words, barring some sort of miraculous change, Mesoraco looks like a reserve backstop with a little pop on whom you can’t really rely. Given that the Mets are rolling with Jose Lobaton and Tomas Nido as their catching options, that’s potentially an upgrade. But Mesoraco really does provide a very similar outlook as the departing Harvey: expectations are likely to be higher than they should be thanks to a brief period of dominance. Before we can imagine some sort of improbable return to offensive dominance, we have to first find a reality where The Groundhog pops up for more than a few seconds before scurrying off the field. —Bryan Grosnick

With Todd Frazier hitting the disabled list with a sore hamstring that the Mets finally revealed has been bothering him for weeks (it’s literally a 10-day DL), they’re are adding Luis Guillorme as an extra infielder. Guillorme is the best pure glove in the Mets system and is plus or better at all of the three infield spots at which he’s seen time. At the plate he’s a slap-and-dash hitter, but with enough strike zone knowledge and barrel control to make it work at every level so far. Guillorme’s a better use of a bench infielder spot than Jose Reyes just on the defensive gap, but expect this to be a short stay as it’s unlikely the Mets give up on their former franchise icon while the days are still getting longer. —Jeffrey Paternostro

You need to be logged in to comment. Login or Subscribe
Theodore Weicheld
So, I guess you obviously know Mesoraco's from Punxsutawney, PA, right?
Reply to Theodore