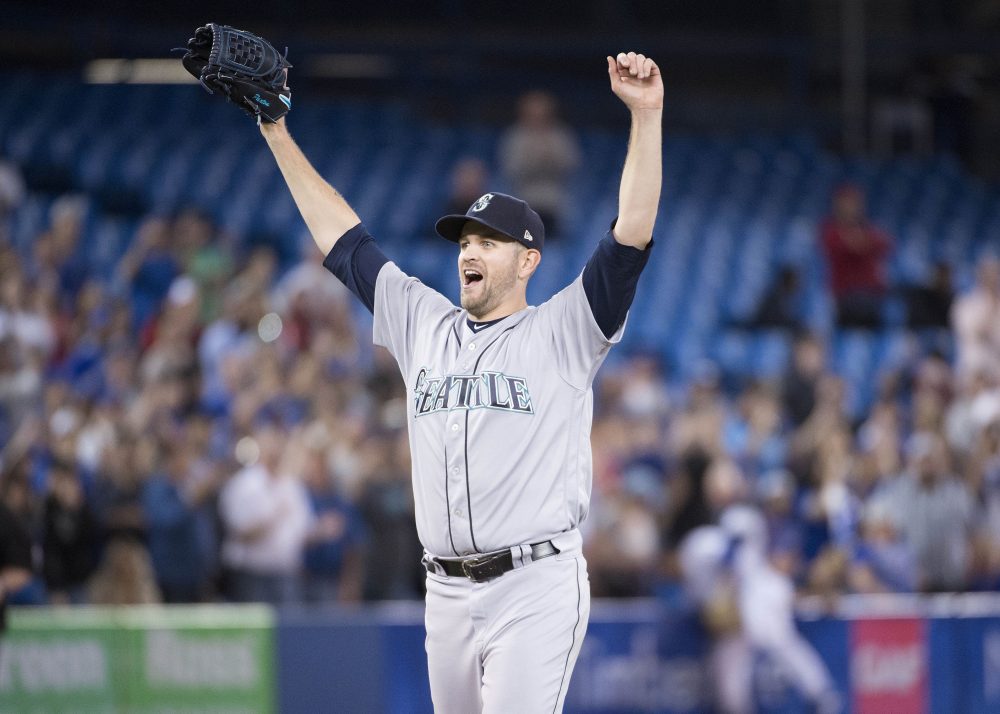 Lander, British Columbia’s own James Paxton threw a no-hitter in Canada against the Blue Jays, becoming the first Canadian-born pitcher to throw a no-hitter since 1945, according to about 75 tweets that came across my timeline immediately after the game went final.

No-hitters are cool and special (even if this is the third the league has seen in a 17-day span), so it’s strange to say Paxton was somehow less dominant than his last time out when he struck out 16 and allowed all of five hits in seven innings against the Athletics. But either way, he is on an absolute roll right now. He did the deed in Maddux-ian fashion, needing just 99 pitches and hitting as fast as 100 mph on his fastball. In fact, his last three pitches of the night were his hardest thrown.

As is often the case, he wasn’t without good fortune. Kyle Seager made perhaps the play of the game in the seventh inning, stealing an extra base hit from Kevin Pillar to preserve the no-hitter.

It brought back memories for some.

Seager's play inspired me to watch Wise's catch in the ninth inning of Buehrle's perfect game in 2009. My goodness, that was great. https://t.co/ml57ZLAh89

Paxton has lowered his ERA from 5.12 to 3.40 over his past two starts, and has 67 strikeouts against 19 walks in 47 ⅔ innings on the season. At 29, the biggest issue throughout his career has been staying healthy, as he’s never tossed more than 136 innings in a season. It’s only been two starts, but he’s at the moment showing the potential many long believed he had.

The Yankees have now won 16 of their past 17 games, beating Boston 3-2 to tie their arch-rivals for first place in the AL East. Luis Severino was aided offensively by a man who likely didn’t hear a lot of boos from the home crowd.

Severino continued his brilliant start to the season, striking out 11 and walking zero in six innings of work, but the Red Sox drew even in the seventh when David Robertson allowed an RBI triple to Mookie Betts after Severino departed following a leadoff single by Eduardo Nunez. And in a game full of boppers, the Yankees pulled ahead on a measly single by Aaron Judge.

The season is not quite one-fourth complete but #Brewers Brent Suter was asked where his home run off Kluber will rank among unlikely events after all is said and done. "I'm not sure exactly where but I'm going to guess Top 5," he said.

The projected distance of 433 feet makes it the 5th-longest HR by a pitcher since Statcast began tracking in 2015. pic.twitter.com/1cPP1dMonu

As far as fun facts go, this one has to rank pretty highly in terms of obscurity.

It’s cool, though, because it provides another opportunity to marvel at the talent of the Braves’ young star.

The Braves had three hits against Tampa’s Blake Snell, two of which came off the bats of Acuna and Ozzie Albies, who is all of 21 years old. They backed a solid outing by another Atlanta youngster, Sean Newcomb (24) as the Braves improved to 20-14. I don’t know how good the Braves are going to wind up being in 2018, but their young talent is a helluva lot of fun to watch.

James Paxton threw a no-hitter tonight. You may have heard? Well, Dylan Bundy did the opposite of that. We’ll call it an all-hitter. Or maybe a no-outer? I dunno. Anyway…

The Royals, for context, took nine games to hit their fourth home run of the season. Tuesday, they hit four home runs in a seven-batter span. When the first inning was over, the Orioles trailed 10-0. Bundy … your baseballs … woof.

Aaron Nola continued his and the Phillies’ solid start to the season, striking out 12 in seven innings, lowering his ERA to 2.05.

Nola’s breaking stuff was working as well as his fastball on Tuesday. He generated 26 whiffs on the night, including nine of the 21 change-ups he threw, according to Brooks Baseball. He left at 109 pitches and threw 75 of them for strikes.

Speaking of good pitching, shortly after Paxton wrapped up his no-no, our attention was diverted to San Diego, where Jeremy Hellickson of all people flirted with a perfect game. The 31-year-old took it into the seventh inning before being spoiled by a leadoff single by Travis Jankowski.

The Padres were no-hit by a group of Dodgers pitchers less than a week ago. So, ya know, this is kind of old hat for them.

We need someone to weigh in STAT on the status of tickling in the unwritten rule book.

Bryant tickled his former teammate during an otherwise uneventful benches clearing scrum, and then tickled the basepaths in scooting home for the deciding run in the Cubs’ win over the Marlins.

Being traded to the Athletics during the offseason allowed Stephen Piscotty to move closer to his mom, Gretchen, who died Sunday night at the age of 55 after a battle with ALS. Piscotty rejoined the Oakland lineup Tuesday and received a nice ovation from the crowd before recording a base hit.

The actual answer is Seager in Toronto, but since you already saw this, here’s the no-longer-disabled D.J. LeMahieu doing what he does best.

A whoooole lotta afternoon baseball, including Gerrit Cole making his first start since last week’s gem against Daniel Megden and the Athletics. If you’re one of those weirdos who wakes up in the morning, you can tune in for Mets-Reds and see if you can catch a glimpse of Matt Harvey wearing a Reds uniform. The Yankees and Red Sox continue their second series of the season with Rick Porcello facing off against Masahiro Tanaka. The Mariners will follow up PaxtonMania by tossing, uh … Wade LeBlanc as they continue their series in Toronto. Oh, and Bartolo is pitching against Detroit.