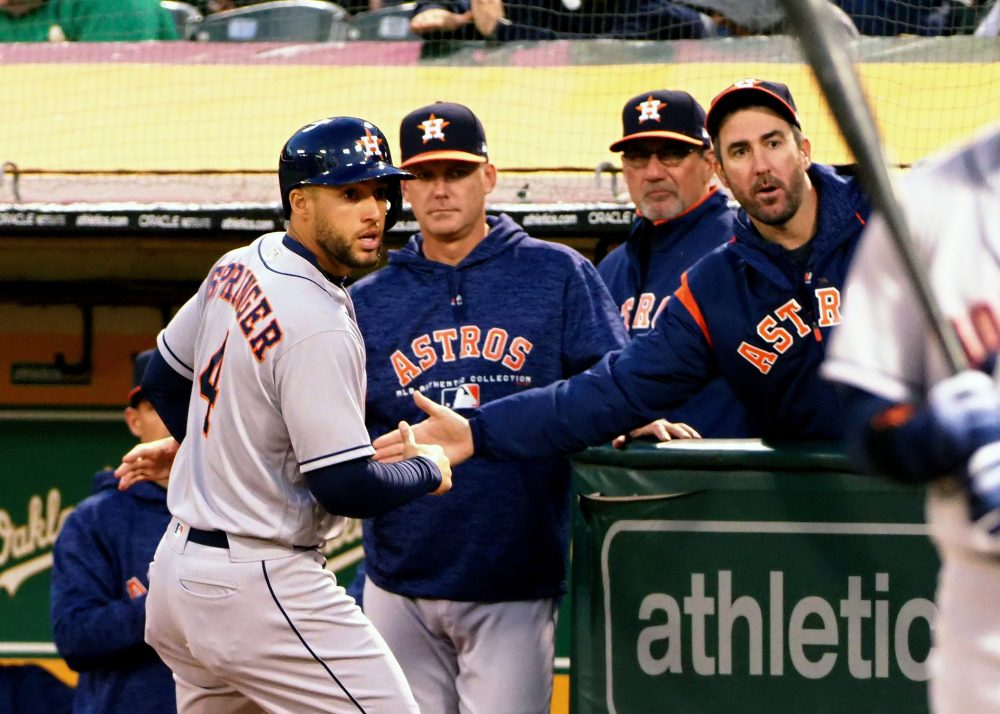 On July 8, 1965, Joe Morgan was the leadoff hitter for the Houston Astros as they took on the Milwaukee Braves. While the Braves ended up winning 9-8, it was despite Joe Morgan doing his level best to turn the old County Stadium into his own personal playground. He went 6 for 6, including two home runs and a double. He accomplished this in a losing effort over 12 innings, but what he did on that diamond wouldn’t be forgotten, since he would end up going down in franchise history as the only player to get six hits in a single game.

Morgan received some company in that department Monday night. The Astros demolished the Oakland Athletics to the tune of 16-2, and although Dallas Keuchel deserves plenty of credit for completely neutralizing the A’s over eight innings, and the rest of the Astros’ offense earned a shout-out for once again displaying just how much of a nightmare they can be for their opposition on any given night, the spotlight deservedly shined on George Springer as he finished the night in Joe Morgan territory: 6 for 6.

Just like the A’s hitters had no idea as to what to do with Keuchel, Oakland’s pitchers had no answers for what Springer brought to the plate. Brett Anderson got rocked and Springer was the one who did the most damage. He hit a double to lead off the game and returned in the second inning and tried to hit one into the concourses of Mount Davis.

Springer’s dinger made it 5-0 and it got exponentially worse from there for Oakland. Springer’s third hit off Anderson ended up being the penultimate straw that broke the camel’s back, and Anderson got the hook after Jose Altuve singled to make it 7-0. By the time Springer got his fourth hit of the game and his only hit off of Chris Hatcher for the night, it was 11-0 Houston.

The Astros added five more runs and Springer eventually added two more hits — these both came off of Wilmer Font and it brought his tally to a perfect 6 for 6. Not only did Springer join Joe Morgan in that club, he did it in three fewer innings. There aren’t too many players who can say that they pulled off a feat that was equal to or better than something that Joe Morgan did, but George Springer just might be one of those players after his amazing performance last night.

In further blowout news, the Phillies laid waste to the Giants to the tune of 11-0. However, the rout did contain what was probably the most interesting play of the night. I’m sure that you haven’t forgotten Odubel Herrera’s amazing catch from a couple of weeks back. On Monday night, we almost had a repeat occurrence of that catch, only this time it was the road team who had a shot at robbing a Phillie of a home run.

Carlos Santana hit one deep to center field and Gorkys Hernandez did indeed manage to get the ball into his glove. Unfortunately for him, the ball popped right out and went into the bushes in center field for a three-run dinger that made it 8-0 and basically put the game out of doubt. Poor Gorkys.

The @SFGiants didn’t know what they had until it was gone… pic.twitter.com/E2Xi13aFZe

The fans in Cincinnati got treated to something truly rare and amazing last night. It wasn’t a win, as the Mets led from wire-to-wire and picked up a 7-6 win despite the Reds battling all night long. And it wasn’t Jay Bruce returning to Great American Ball Park to hit another dinger.

Jay #Bruuuce has some experience doing this at Great American Ball Park. 💪 pic.twitter.com/X9ABsYHEaz

No, the truly special and remarkable moment came when Billy Hamilton hit a home run. He’s only good for around four a year, so the fans who actually showed up to the game were truly lucky! With that being said, he’s already got two on the season now so maybe he’s going to go on a tear and threaten his career high of six. Who knows?!

Elsewhere in the NL East, the Nationals have won eight of 10, and one guy who is playing a huge part in their resurgence so far is Matt Adams. Big City had himself a big night and continued the power surge he’s been on. He’s always been known for going on offensive binges from time to time, but seven home runs in seven games means that Big City’s skyscrapers are reaching even taller heights than ever.

Adams hit two dingers against the Padres; his first one gave the Nats some breathing room, and his second basically put the game out of reach.

Matt Adams has 7 HRs this month.

That’s three wins for the NL East on the night, but they didn’t get four because the poor Marlins went up to Wrigley Field and got clobbered by the Cubs. Chicago came in with a five-game losing streak but sometimes the best tonic for a losing streak is seafood and the Cubs had their fair share of it when it came to beating down on the Marlins.

One of the Cubs who enjoyed the fish fry the most was Ian Happ. Chicago hit four home runs on the night and Happ hit half of them himself.

.@ihapp_1 homers from both sides of the plate and sets a career high with five RBI! #EverybodyIn pic.twitter.com/8WlBB39xBt

Three of Chicago’s dingers came off of Jarlin Garcia. Jarlin the Marlin will have better days ahead of him but it just wasn’t the night for him or his fellow Marlins.

Halfway through six innings at Globe Life Park in Arlington, it sure seemed like the Tigers were on their way to cruising to victory. They had just gone up 5-1 off the strength of a two-run homer from Leonys Martin and everything appeared to be going Detroit’s way.

The happy homecoming for @Leonys27Martin continues! Swinging a big bat in Arlington! We’re happy. Debbie is, too! All the action is happening NOW on FSD & #FSGO! https://t.co/5djhErxprf pic.twitter.com/mEFNRXSU8m

Things got sideways for the Tigers in a hurry over the next two innings. The Rangers immediately fired back with four runs in the bottom half of the sixth to tie it at 5. Detroit pushed over another run in the seventh to regain the lead but Texas once again responded immediately. This time, they snatched the lead with a two-run seventh inning, including a triple from Jurickson Profar that brought home what was eventually the game-winning run for the Rangers.

.@JURICKSONPROFAR wasn’t satisfied with a tie game, so he changed it. pic.twitter.com/51D1l7bm7k

Dexter Fowler was the walk-off hero for the Cardinals on Sunday night but things were very different Monday night. Fowler hit a fly ball around 375 feet to left field. Minnesota’s Eddie Rosario made sure that it didn’t go 376 feet and over the fence.

We only got a little taste of baseball last night with just seven games. The good news is that you’ll get a full course tonight since all 30 teams will be in action. That includes yet another revival of the classic Yankees-Red Sox rivalry. This time they’ll be battling in the Bronx and while Boston’s offense has been getting the job done so far with a team TAv of .273, they’ll have their hands full with Luis Severino.

New York’s ace has been in fine form so far this year, as Severino currently has a sparkling ERA of 2.11 with a FIP of 2.41. His 2.40 DRA and 81 cFIP also indicate that he’s doing a solid job. As cliche as it may sound, the Yankees-Red Sox rivalry has actually been quite entertaining so far this season and with a matchup like this, it is absolutely worth paying attention to Tuesday night.

You need to be logged in to comment. Login or Subscribe
Robert Hacking
I didn't see the post-game interviews, did Springer go on a rant about how suspected PED users shouldn't be voted into the Hall of Fame?
Reply to Robert
Louis Arighi
I L'edOL
Reply to Louis