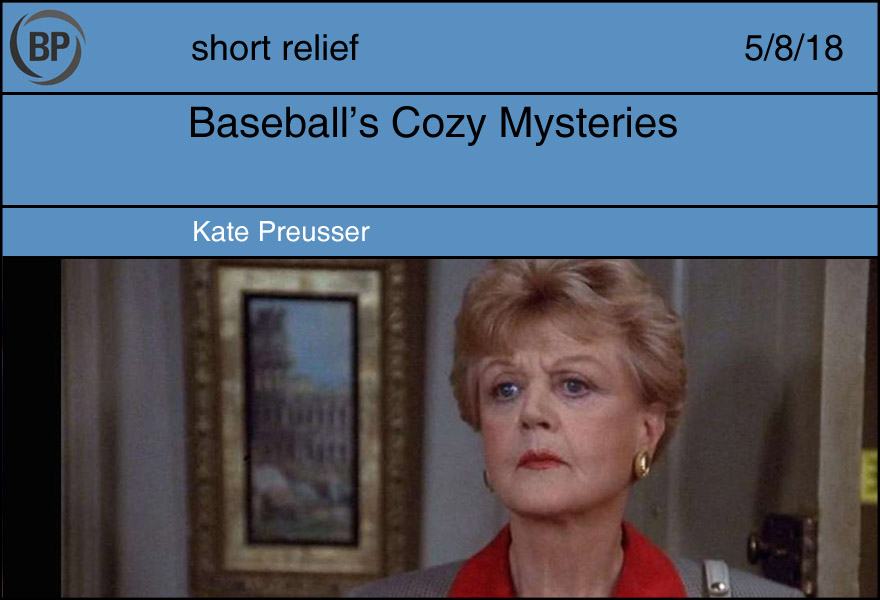 Lately I’ve been re-watching Murder, She Wrote. I say re-watching, because I remember watching it as a child with my grandparents, but really my memories of the show are hazy, as soft-focus as the early-80s images themselves. I remember as a kid wanting to be just like Jessica Fletcher, a famous author who also got to teach school and solve mysteries and somehow own a partial share of a football team, act as a Broadway impresario, ride racehorses, and perform in circus sideshows. I read an article once that said often people pine not for the pop culture of their salad days but from their early childhood, that time of safety and comfort, and I find that’s true: the frosty makeup and gold hoop earrings and Victorian-revival fashions of MSW are comforting, as is the structure of the show itself, the ur-example of the cozy mystery. There is danger, but not too much, just enough to be thrilling; and there is a problem, but it will be solved by the end of the hour, and then the next hour everything will start all over again. Unlike the vivid dystopia of current popular shows, those technicolor nightmares, MSW doesn’t require a wholesale investment of one’s attention. It’s a little bit like how I watch baseball games when I’m not invested in the outcome, as background noise that occasionally intensifies to a point of mild interest, something that has a prescribed beginning, middle, and end.

Today I watched the San Francisco Giants play the Philadelphia Phillies in a game that garnered my total indifference, and I decided to watch it like an episode of Murder, She Wrote. The fun of watching something like MSW or any other mystery is, of course, to see if you can beat the detective to the answer, to figure out whodunnit. 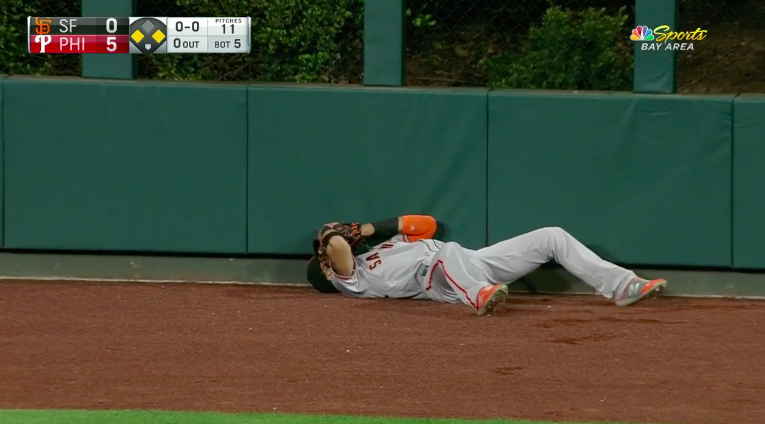 Next, the list of suspects. There are certain tropes that appear again and again in MSW, stock characters that are given slightly different appearances and occupations but who play mostly the same role. The first character to figure out is the Innocent, the golden boy or girl (usually a young cousin of Jessica Fletcher’s, whose family tree must consume some serious acreage) who was in The Wrong Place at the Wrong Time and due to an unfortunate chain of events, is under suspicion and must have his or her name cleared by Jessica:

We know you didn’t mean it, Buster.

The next step to solving a MSW episode is to figure out who is the red herring, the obvious suspect, with the clearest motive, who will nonetheless be the first to have his or her name cleared. 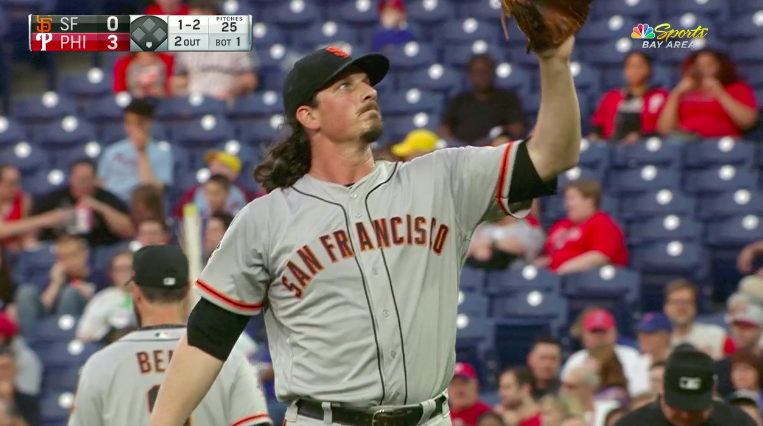 Long, unkempt hair is almost always a certain moral shading in the Reagan-rooted MSW universe, suggesting a character rough around the edges and worthy of suspicion who is ultimately redeemed through no good action of his own. He is the character the show wishes it could pin it on, but knows it’s too easy. If giving up home runs is a crime, Shark isn’t alone in committing it.

So then attention must turn to the rest of the field. This is where the tricky part, the actual detection, comes in. The perfect murderer is a choice that seems obvious in hindsight only, the satisfaction of “but of course!” rather than “what in the world?” It’s a tricky balance, and one that MSW doesn’t always hit in each of its 264 episodes. Similarly, in 181 baseball games, sometimes the culprit is too obvious. 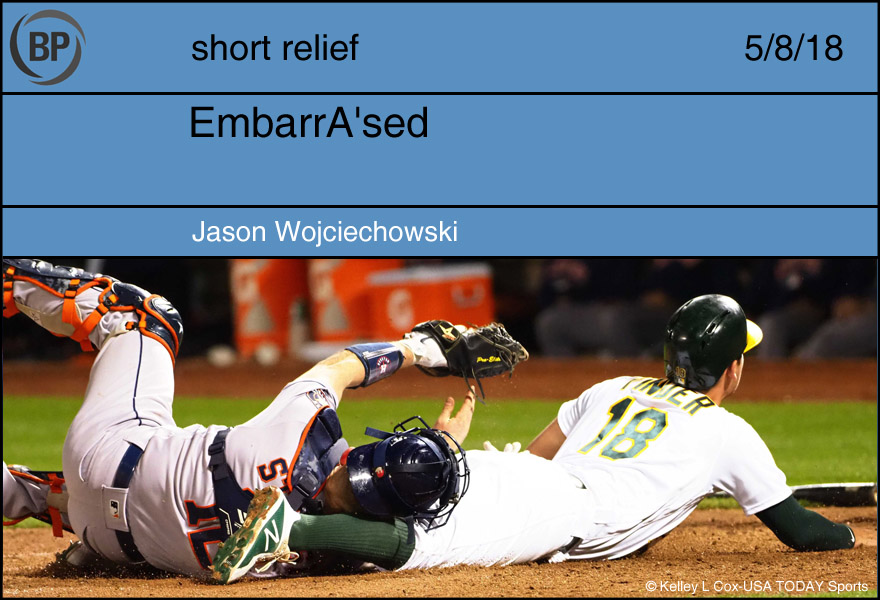 We’re reading Stephen King‘s ‘Salem’s Lot in my book group right now. We’re normally pretty High Lit (Rushdie, McInerney, Fante, Didion) but this round’s theme is “Stuff You Missed In High School,” so we’ve got some pretty wide-ranging choices (from A Prayer For Owen Meany and The Grapes of Wrath to The Hound of the Baskervilles and the aforementioned Lot) as the members went different directions with the general notion of the prompt. I’m going to miss the next meeting because I’ll be away on vacation, but I’m reading the book anyway, largely because I’m terrified out of my wits about it.

I bought a new mass-market paperback copy, and the night it arrived, I had a nightmare. Mind you, I had not even read the back cover yet. I did not know, and still 90 pages into the book do not know, what it is about. (Vampires? In Maine.) I do not enjoy fear, but I am one of those fools who thinks there is moral good in facing one’s bugbears.

This is why I consider it so honorable that the A’s played a baseball game against the Astros, and specifically Dallas Keuchel, on Monday night. Houston might yet be the best team in the league, and boasts a fearsome offense. Oakland might be the most mediocre team in the league, with a reputable batting staff weighed down by hurlers who would have topped out at average even without injuries. And yet. And yet! The A’s put on their uniforms and they walked onto the field and they hit soft tappers and popups, they struck out repeatedly, they reached base mainly because of wild throws by Houston defenders, they generally speaking did not appear to be playing by the same set of rules as the Astros. They got embarrassed.

But strength comes in understanding that nothing about being alive isn’t embarrassing. Wetting your pants in front of your crush or metaphorically wetting (giving up 11 runs in four innings) your metaphorical pants (at home) in front of your metaphorical crush (the team you aspire to be like) is just the most extreme version of the daily shame of being a breathing, perspiring, consuming, expressing human being. Doing all this at all, forget about a chin-up bearing or a stoical attitude, is worthy of the utmost praise.

Good job, then, Oakland Athletics, for getting extremely, preposterously, horrifically whooped, then waking up again the next day.

You need to be logged in to comment. Login or Subscribe
Llarry
Jessica Fletcher. Do NOT invite that woman to dinner (unless you *want* someone to die...)
Reply to Llarry
John Wood
this is so good
Reply to John
Kristoffer Ericson
Do Matlock next! I love(d) Matlock...
Reply to Kristoffer