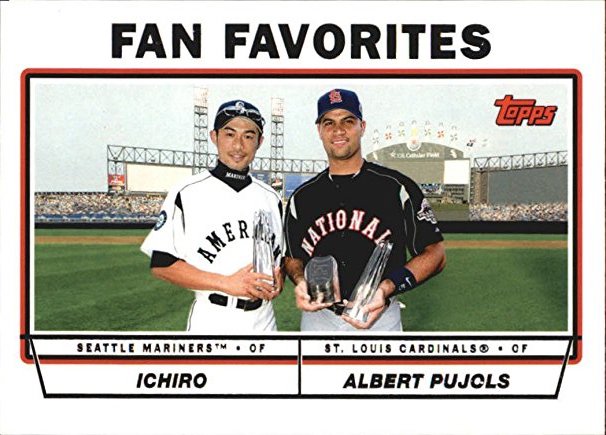 Albert Pujols made his MLB debut on Opening Day of the 2001 season, playing left field and batting sixth for the Cardinals on the road against the Rockies. Five hours later and 1,300 miles away, Ichiro Suzuki debuted in Seattle, leading off and playing right field against the A’s. That day Pujols had one hit and Ichiro had two hits, and … well, you know the rest. They were named Rookie of the Year winners for their respective leagues—with Ichiro also winning MVP of the American League, while Pujols finished fourth in the National League voting—and both went on to be 10-time All-Stars.

Last week, about 18 years and one month later, the future Hall of Famers were again linked in greatness. Ichiro announced his retirement last Thursday, transitioning into a front office role with the Mariners following a career in which he totaled 3,089 hits in America and 1,278 hits in Japan. The very next day, Pujols joined Ichiro in the 3,000-hit club. And not only did Pujols get his 3,000th hit while playing against the Mariners, in Seattle, it was a soft liner into Ichiro’s old home in right field. (If the 2001 version of Ichiro had been in right field, he may have tried to throw out the 2018 version of Pujols at first base.)

All of which got me thinking about April 2, 2001, and about how remarkable it is that two all-time great hitters debuted on the same day. Or at least my assumption was that it’s remarkable. To find out for sure, I got a little help from Hans Van Slooten, owner of a great name and manager of baseball operations for Baseball-Reference. My initial question was a simple one: Which date in baseball history produced the most hits by players who debuted on that day?

The answer is May 1, 1879, on which the players who debuted went on to total 15,303 career hits. But that answer isn’t much fun, because the sport being played today barely resembles the one being played in 1879, and also because those 15,303 hits came from 26 different players. In fact, the top three and five of the top seven most hit-heavy debut dates were in the 1800s. So we narrowed the focus a bit, looking only at post-1900 seasons and only at players who totaled at least 1,000 career hits. Quality over quantity, basically. 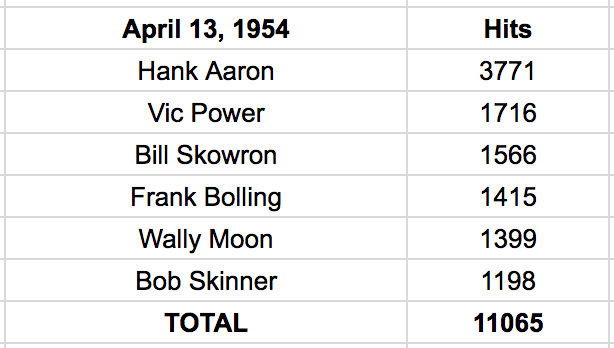 In addition to ranking second on the all-time homers list, Hank Aaron ranks third on the all-time hits list, and he has the most hits ever among players with 200 or more home runs. Aaron went 0-for-5 in his debut, but then had two hits in his second game and never looked back, batting at least .275 in each of his first 18 seasons.

Six players who debuted on April 13, 1954 went on to amass at least 1,000 hits, which is the post-1900 record for any date. Also: “Vic Power” might be an even better name for a first baseman than “Hans Van Slooten” is for a manager of baseball operations, and I’ve always been amused by the fact that Power was known for his defense, winning seven Gold Glove awards, and never cracked 20 homers in a season.

Second place belongs to Opening Day of the 1958 season. 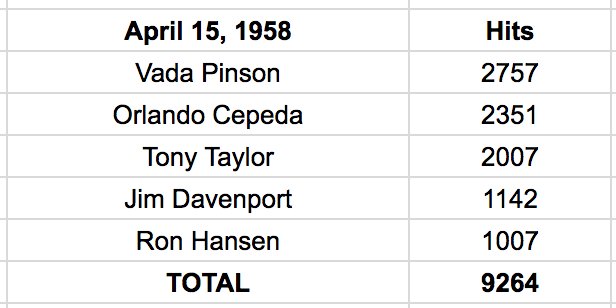 Vada Pinson debuted for the Reds at age 19 and singled off Hall of Famer Robin Roberts for his first career hit. Despite playing his prime years in the pitchers’ haven of the mid-1960s, he racked up the sixth-most hits of all time through age 29, with his 1,881 trailing only Ty Cobb, Mel Ott, Rogers Hornsby, Alex Rodriguez, and Hank Aaron. And then Pinson had just 876 hits after entering his 30s.

Frank Robinson and Luis Aparicio are both Hall of Famers, ranking 35th and 71st on the all-time hits list. Tito Francona was an All-Star outfielder whose son, born almost exactly three years after his debut, is one of the most successful managers of all time.

Another tremendous name: Jerry Lumpe. In fact, if names were handed out based on descriptive accuracy, I’d probably be “Aaron Lumpe.”

Ken Griffey Jr. and Omar Vizquel debuted as Mariners teammates, with Griffey batting second (one spot behind Harold Reynolds) and Vizquel batting ninth (one spot behind third baseman Edgar Martinez). Griffey was 19 and Vizquel was 21, yet Vizquel notched 162 hits after Griffey retired (and 361 hits after Finley played his final game).

Rounding out the top five is Opening Day of 1924.

As expected, Opening Days dominate these rankings. The top non-April debut date for hitters since 1900 is September 6, 1967, led by Graig Nettles (2,225 hits), Amos Otis (2,020), and Pat Kelly (1,147). Interestingly, the top nine non-April dates are all in September, which makes sense in that the primary times teams are likely to call up prospects en masse are Opening Day (at least before service-time manipulation became such a thing) and when rosters expand in September. The top debut date that wasn’t April or September is May 10, 1982, with Willie McGee (2,254) and Tony Phillips (2,023).

So where the heck is April 2, 2001? Sixth place, mostly because Ichiro and Pujols didn’t get much help from their fellow debutants.

Ichiro and Pujols have the most hits ever for two players who debuted on the same day, and April 2, 2001 is the only day in baseball history on which two members of the 3,000-hit club debuted. And then … Shea Hillenbrand. No one else who debuted on Opening Day of the 2001 season totaled even 500 career hits, let alone 1,000. Hillenbrand came out of the gates strong, averaging 158 hits through his first six seasons, but then he was finished at age 31. He last played in the majors way back in 2007, which was the season before Pujols won his second of three total MVP awards.

You’ll also note April 2, 2001 is just four hits behind April 15, 1924, so Pujols should be able to get his debut date into the top five within the next week or so. Moving up any higher than that will be impossible. I’ll let Hillenbrand off the hook a bit by noting that 24 of the 32 members of the 3,000-hit club—including both members of the 4,000-hit club—debuted on days with zero other players who reached 1,000 hits. At least Ichiro and Pujols had each other (and Shea).

So, to answer my initial question: Yes, April 2, 2001 was a special day in baseball history.

You need to be logged in to comment. Login or Subscribe
jfranco77
4/25/18, aka Acuna day. It looks like Daniel Palka was the only other hitter to debut that day, so Acuna's going to need to get a move on.
Reply to jfranco77
mark warmuth
Interesting the Opening Days because now, usually the best prospects don't open the season due to the service time accumulation.
Reply to mark
Jim Maher
Vic Power was one of my favorites-- he stole home, I believe, 7 times despite the lack of home runs.
Reply to Jim