A Bog to Sell You 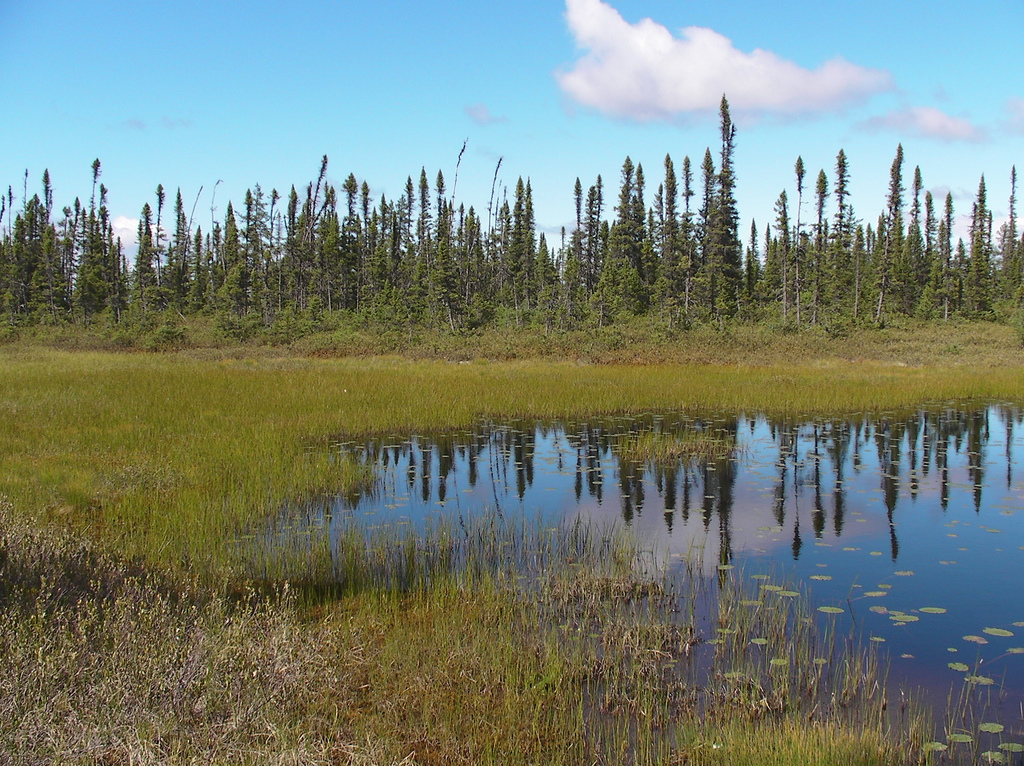 But when all the tape measures are tucked away, the fair territory of most professional baseball fields is roughly 2.5 acres, plus or minus up to one-fifth of an acre. Foul territory and seats, of course, take up additional area, not to mention all of the various amenities and entertainments fans have come to expect as part and parcel of a baseball game, but a game could be played, with even a little foul territory and some bleachers, on a mere three acres. However, as many beleaguered leagues, associations, and school districts will attest, three acres is not always easy to come by.

The residents of Crow Wing County, Minnesota, though, happen to have a troublesome but expansive four acres to spare, and should some team be willing to relocate to the Land of a Thousand Lakes, they might propose to the people of Brainerd and Legionville a solution to their rather singular problem.

A floating mass of peat and vegetation—robust enough to support some trees and vast enough to wreak considerable havoc when it has sidled up to various shores—North Long Lake’s mobile island is an unlikely but exciting opportunity for baseball.

As a potential field, it hosts a wide range of advantages: as a rather mobile entity, it could be adjusted to take advantage of atmospheric conditions. Don’t like the way the wind is blowing out on a day the home team has a shaky arm on the mound? Turn the island: congratulations, the wind is a fourth outfielder. Pesky shadows creeping in on the day-night double-header? Say no more.

The soft spring of the turf offers low-impact running, too—a vast improvement from conditions, say, at Veteran Stadium, former concrete ankle-breaker of the Phillies. Though the occasional slip-through on this field may result in wet feet, lost baseballs, or missing right fielders, that’s what ground rules and Stuart Dybek stories are for. Now that Detroit no longer plays in a stadium with ears, now that Tal’s Hill has been leveled, a field with a little character would be a draw. Think, also, of the “Bass and Baseball” packages the team could offer: nine innings and fishing.

It’s a real opportunity. The important thing is not to get bogged down in the details.

After Years of Silence, Replacement-Level Man Speaks Out

Suzyn Waldman putting her ignorance on full display tonight: "And there's WAR—‘Wins Above Replacement.’ Robbie Cano was here and his WAR was 8. Well, his backup wasn’t Joe Morgan; it was Eduardo Nunez. So what’s that even mean?" @keithlaw I’m venting to u. #smrtbaseball

NEW YORK, NY — Major League Baseball’s most invisible employee gave a rare interview to the New York Daily News yesterday, setting aside anonymity to ask fans for a little more tolerance for a man they don’t even know. Jacob Wymer, 34, is the league’s replacement-level player.

“After I got out of undergrad, I just kind of stumbled around for a few years,” Wymer told the Daily News. “I’d start a job and feel like I was doing okay at it, but I always seemed to get passed over for promotion. My girlfriends kept leaving me. 2008 was super rough, with the economy and all. I got laid off six times that year alone. Some writers collect rejection letters; I could wallpaper my apartment with polite letters of recommendation. It sucked.”

Then, one afternoon in 2012, Wymer got the call from MLB. “They said they had a perfect job for me. I was kind of low at the time. I told them I couldn’t possibly think of a job for them I could be qualified for. They said that was why I was.”

Wymer, who played second base at his local community college, is now the Official Replacement Player of Major League Baseball. He didn’t share what the responsibilities of his office entails, but he says he “stays in pretty good shape” and “can still turn on a mistake pitch.”

“The thing is, every time someone talks about how great Mike Trout is, it hurts. Like, you might think you’re just complimenting him, but what you’re really saying is, look how much better Mike Trout is than Jacob Wymer. Every web gem – that’s not a play that Jacob Wymer could make. I know it’s not meant to be hurtful, but it really wears down on you after a while.”

“You’d think that at least I could look at it the other way – I’m better than Albert Pujols, and he’s a Hall of Famer! Except in that case, all I can think of is how I could have helped a team by playing there, and I never do.”

Wymer admitted that he’d probably have to hang up whatever equipment he uses pretty soon, and hand off the role of measuring point to someone younger. And while people will stop unconsciously contrasting Jacob Wymer with their favorite ballplayers, Wymer will never really be free of it.

“Most people feel like zeroes a lot of the time. It’s another thing to have your job be mathematically predicated on it.” Wymer says that the solution, like most, is from perspective. “Next time you talk about Mookie Betts’ WAR, maybe try using yourself as the R instead of me. Be honest with yourself. Tell yourself, Mookie Betts is 28 wins better than I am. But compared to him, I’m probably a one-win knitter.”