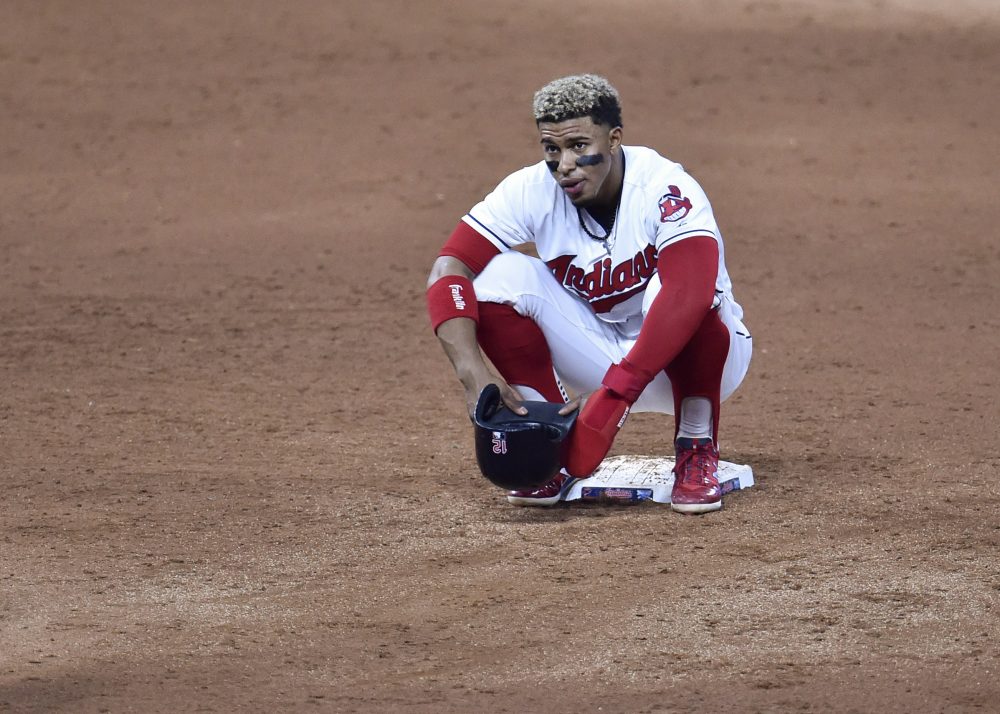 Congratulations are in order for the Cleveland Indians, who managed to score 24 runs in a single day. Granted, it took them 20 innings over two games to do so–but they did it! The most amazing part of this feat is that it’s still not even close to the AL record for most runs scored by one team during a doubleheader (Hi there, 2007 Texas Rangers) but it is still impressive to see one team dish out that much offense in just one day.

So how did Cleveland do it? Well, having two colossal innings in each game probably went a long way toward giving them double-digit runs in both games. The Tribe put up seven runs in the fourth inning of Game 1, with three of those runs coming from Francisco Lindor. He actually had two dingers in this one, with his second being crucial as it was part of a rally that eventually sent the game into extra innings.

Francisco Lindor mashes a three-run homer in the 4th, then follows with a solo dinger in the 8th for two big files on the day (00:34)

That was when Toronto stole the show. Despite Cleveland’s big offensive outburst early, the Blue Jays mashed right along with them and it was capped off by Yangveris Solarte hitting a grand slam in the 11th inning that eventually won the game for Toronto.

Solarte was the clear hero of the day for the Jays as he ended up breaking a franchise record with eight hits over the two games. He even picked up in Game 2 right where he left off in Game 1 with a solo homer to put Toronto in front in the early stages of the game.

While Solarte’s offense was enough to send the Blue Jays soaring to victory in game one, it was merely a sideshow when compared to the sustained attack that Cleveland went on during the evening. Their second massive offensive inning of the day came right in the middle of the contest, as they proceeded to push nine runs across the plate in the fifth inning. Jose Ramirez was the big provider in this particular frame, as he collected three RBIs in two plate appearances during that frame.

Jose Ramirez crushes a two-run home run to right field, scoring Jason Kipnis and giving the Indians a 4-2 lead in the 5th (00:49)

Jose Ramirez collects his third RBI of the inning as he lines a double to right field, scoring Francisco Lindor (00:50)

While part of Toronto’s woes in the second game were self-inflicted, this was still a case of Cleveland transporting Toronto’s pitching to Beatdown Town over the course of two games. The Tribe collected 31 hits over the doubleheader, with 12 of those being extra base hits. While Cleveland’s doubleheader exploits pale in comparison to the Rangers’ Bonds-ian efforts on that fateful night in 2007, it’s still a day that should remain fresh in the mind of Cleveland fans for a decent amount of time.

The @Indians bats are .

The last time a team scored 7+ runs in an INNING in both games of a doubleheader was the A’s on July 22, 1975. pic.twitter.com/NuEtNehdCL

While nobody is officially calling it a retirement, Ichiro was released by the Mariners and has transitioned into a front office role with the club. However, in true Ichiro fashion, he’s still going to be showing up to the games in full uniform and preparing each night as if he’d be playing. Additionally, he’s hoping to play in the 2019 MLB season opener that will be played in Japan. He’ll be 45-years old once that day rolls around, which is five years younger than when he plans on actually retiring at 50, so maybe we haven’t seen the last of Ichiro on an MLB diamond.

Speaking of legends, Albert Pujols continued his quest to reach the milestone of 3,000 hits and he got ever-so-close to reaching that goal on Thursday night. For starters, he hit a double by hitting a scalding-hot grounder down the third base line to get the rout going for the Angels against the Orioles.

The Machine did reach base once again in the game but it didn’t come via hit. Instead, he got plunked in the fourth inning and then popped out and flew out in his last two plate appearances of the night. While the fans in Anaheim didn’t get to see the milestone, there’s a very good chance that Pujols is going to join the 3,000 Club very soon. 2,999 down, one to go.

The Twins are off to a bit of a slow start this season and their performance in the mid-to-late stages of Thursday’s game against the White Sox only exacerbated the issue for them. It was all going so well for the Twins after four-and-half innings, which is when they pushed out to a 5-1 lead following a two-run dinger from Logan Morrison.

Despite the morose atmosphere at Guaranteed Rate Field, the White Sox proceeded to chip away at Minnesota’s lead. They scored four runs over the next three innings to tie the game and then they won the game on a walk-off shot from Trayce Thompson.

Pour a bit of your drink out for Aaron Gleeman, who posted this stat after he saw the Twins blow yet another game.

Twins already have five walk-off losses, which is one short of the most ever through 27 games.

All-time record for walk-off losses in a season is 16. Twins are on pace for 30.

I personally vow to stop watching no later than, like, the 25th walk-off loss.

Don’t look now, but the Nationals may be waking up. They may have spent the first month of the season bumbling through April, but they’ve gotten off to a nice little roll here in May. They’ve won five straight games, with the latest being a 3-1 victory over the Pirates. Jeremy Hellickson made simple work out of the Pirates for the 5.2 innings in which he was on the mound and Trea Turner’s two-run dinger ended up being enough for the Nats to reach .500.

Trea Turner belts a two-run homer to left, his second of the season, giving the Nationals a 2-0 lead in the 6th inning (00:42)

In further NL East news, the Braves ended up finishing a lengthy road trip with a 7-3 record during the trip and a spot atop the NL East standings here in the early stages. They ended the trip emphatically with an 11-0 victory over the previously-first place Mets. The star of the show was Julio Teheran, who continued his success against the Mets by taking a no-hitter into the eighth inning.

Julio Teheran takes a no-hitter into the 7th inning against the Mets, striking out six across seven shutout innings (01:41)

New York may be leaving Texas with a huge series victory over the Astros but they probably won’t miss seeing Carlos Correa on a daily basis. He spent the entire series making amazing defensive plays and he capped it off with an incredible put-out to throw out Gleyber Torres on a tough grounder.

Astros shortstop Carlos Correa shows off his range and makes a fantastic jump throw to nab Gleyber Torres at first base (01:20)

The Yankees are currently the belle of the ball right now after they went to Houston and took three out of four. It might just be early May but that’s still a pretty big victory for the Yankees. Still, they won’t have time to bask in the glory of their early success since they’ll be returning home to welcome the Cleveland Indians into the Bronx for a big weekend series.

While you’ve just witnessed Cleveland’s offense bludgeoning Toronto’s pitching twice in one day, they may have a tougher task on their hands against CC Sabathia. Sabathia’s ERA is currently at a miniscule 1.71, but his FIP is currently at 4.26 which is around the area that we’re used to seeing from him. Additionally, his DRA (4.06) and cFIP (98) are also similar to what we’ve recently seen from him, but that doesn’t mean that Cleveland should have an easy time of it, which is why you should keep an eye on this game tonight. (7:05 p.m. ET)