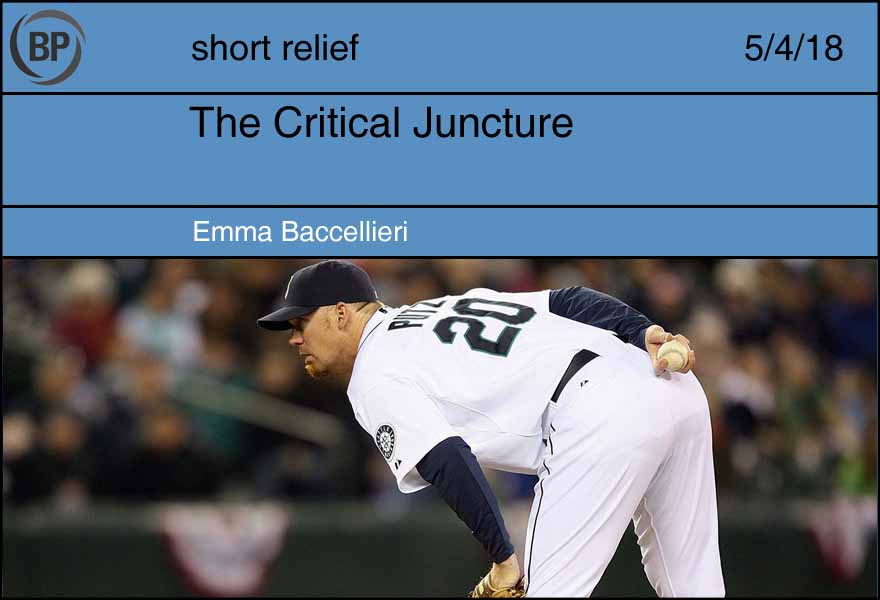 The last notable pitcher we could find who dealt with this specific injury was J.J. Putz, who missed about five weeks with it as a Mariner in 2008. Putz, however, struggled with elbow issues the next season while with the Mets, eventually needing surgery to remove bone spurs.
Putz, now a special assistant with the Diamondbacks, did not recall hyperextending his elbow.

The list looks more like a map of his body than it does an injury record. It’s too exhaustive, too varied to be anything but the former. Even from the beginning, it doesn’t look like it should reasonably belong to a pitcher—a football player, maybe, or an MMA fighter. The first entry is “shoulder,” sure, but then you get “thigh” and “lower back,” “fingers” and “neck” and “knee” and “chest.” Really, it should make them easier to remember. There’s an awful lot of them, of course, but they’re almost all distinct; the entries aren’t just different from one another, but fairly dramatically so. And, more to the point, these aren’t notes that fit around the margins of his career, they are his career. At least one entry in every season after his rookie year. Even when things were at their best—the 40 saves and All-Star appearance and MVP votes of 2007—there was still the elbow strain in spring training and the triceps tightness that had him day-to-day for a stretch in September.

There was always something, then. The injury record was the reason for every other record; every appearance and strikeout and blown save happened only where the injuries made space for them. And, depending on how you look at it, the hyperextended elbow was one of the worst offenders here—sucking up more space than almost anything, warping the lines of his career. Not the hyperextended elbow itself; technically, that entry on the injury record lasted scarcely longer than a month. But didn’t so much that came afterwards start there? The fastball was never the same. And then came the bone spurs in his elbow the following spring, and the surgery to remove them that fall, and the inflammation two years later and the sprain two years after that.

“It’s not doing anybody any good going out there and not feeling 100 percent. I need to get back to the way I know I can pitch,” he told reporters after the initial diagnosis. “I just have to basically start over.”

There was no chance to start over. The injury was the start-over. So, yes: the hyperextended elbow. The inflection point. Someone calls him up to ask, ten years later, and he can’t recall. 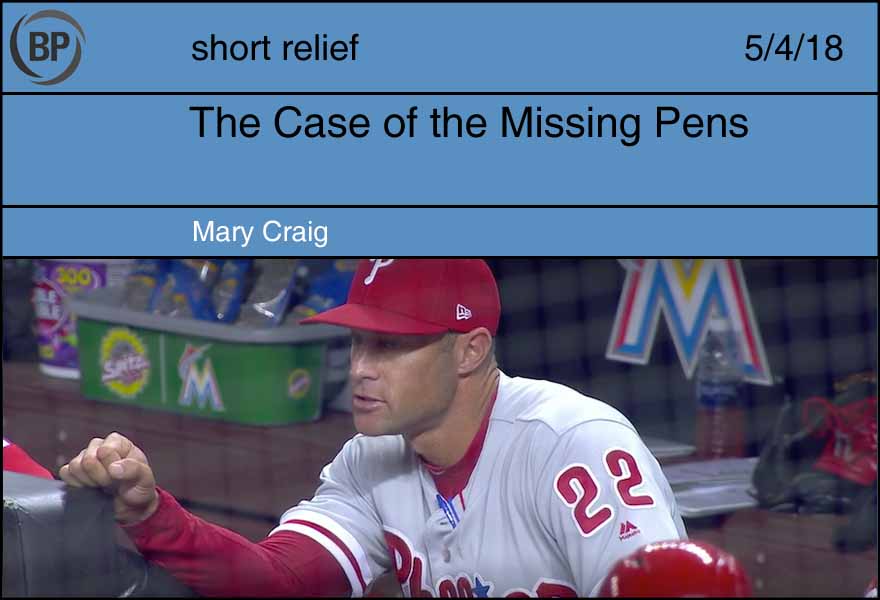 It’s been well-documented by us at Short Relief and the baseball community at large that Gabe Kapler is a, uh, quirky guy. But one particular quirk, according to my Google skills, has flown under the radar: he affixes pens to the lapel of his jersey during games. Now, as a habitual pen-carrier, I can’t fault him for wanting to keep one close at all times. No, the real perplexity behind Kapler’s penchant for keeping writing implements in his uniform occurred during Tuesday’s game against the Marlins.

He began the game, as many of us would, with three pens tucked into his jersey, one red and two blue. By the time the 9th inning rolled around, however, one of the blue pens had disappeared. 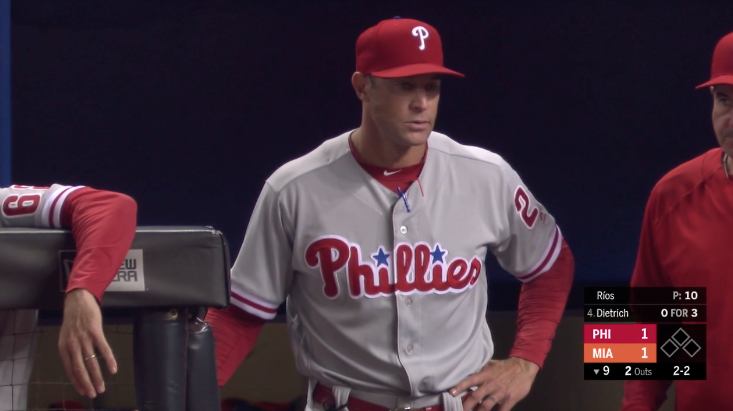 And then, in a shocking twist, the third pen re-appeared for the 10th inning, overtaking the red pen for the top spot! 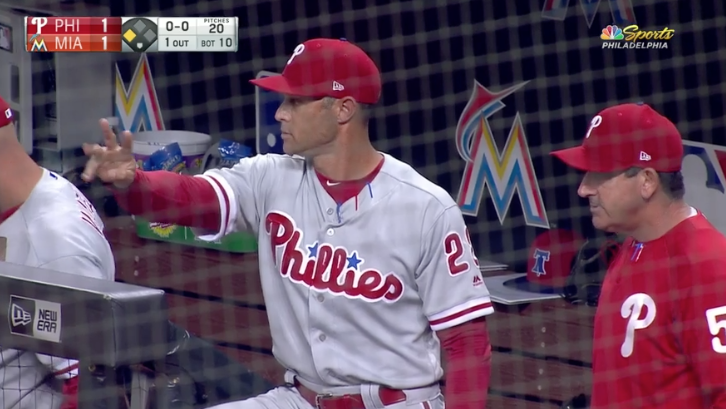 Perhaps the reappearance of the blue pen is meaningless, but believing that runs contrary to a baseball writer’s mind, and in case these pens prove integral to understanding Kapler the manager and Kapler the man, we shouldn’t be so hasty to dismiss them.

Forge ahead we must, under the assumption that the pens mean something. To begin this speculative process, I present three possible scenarios, not ranked in terms of likelihood because, thankfully, my insight into the mind of Gabe Kapler only goes so far.

1. Sensing that managing a Major League Baseball team might not be his job for much longer, Kapler has picked up a secondary job as a notary. Still in training, he frequently forgets the number one rule: never leave behind a pen. Luckily that night his client was kind enough to return the instrument to its owner.

2. Kapler is planning a takeover with the Phanatic of first the Phillies and then the world, and the pens are how the two communicate during games. Two blue below a red, hold steady; one blue and one red, the coast is clear; red in between two blue, abort! The pair have much to work out as Kapler felt the need to signal the return of the third pen, but if this is indeed the reason for the pens, stay alert and monitor future pen placement. The world is counting on you.

3. Believing Eflin to have the game under control, Kapler began writing a blogpost draft about his interactions with his waiter the previous night. Unwilling to be complicit in such an act, the pen leaped from Kapler’s hand, taking refuge behind a water cooler until captured in the top of the 10th inning. 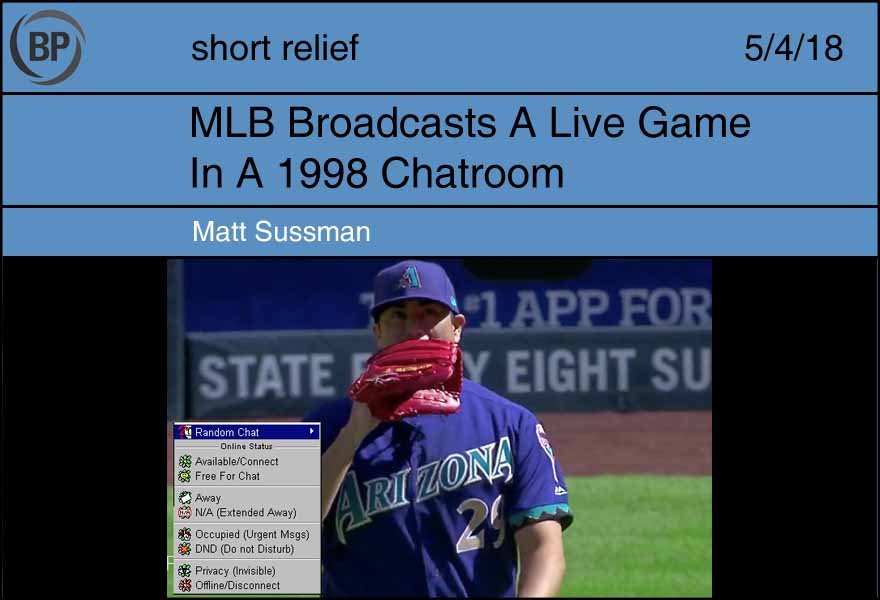 CurveBalla: so ur an expos fan???
Expos1998: no this is my brothers account. Go mets
CurveBalla: go dodgers

**moderator: Andy Benes (ARI) is on the mound. Todd Hollandsworth (LAD) is batting. The first pitch is a called strike**

CurveBalla: oh come on ump!
Expos1998: um, how are we supposed to watch it
CurveBalla: what

CurveBalla: wooooo
Expos1998: I still can’t believe they put a baseball team in phoenix.
CurveBalla: my cousin is from there
Expos1998: cool
Expos1998: is anyone else here

**moderator: Jose Vizcaino bunts the first pitch. Matt Williams fields it and throws to first. Hollandsworth advances to second base**

**moderator wants to share a file with you: vizcaino_bunt_instant_replay.wps**