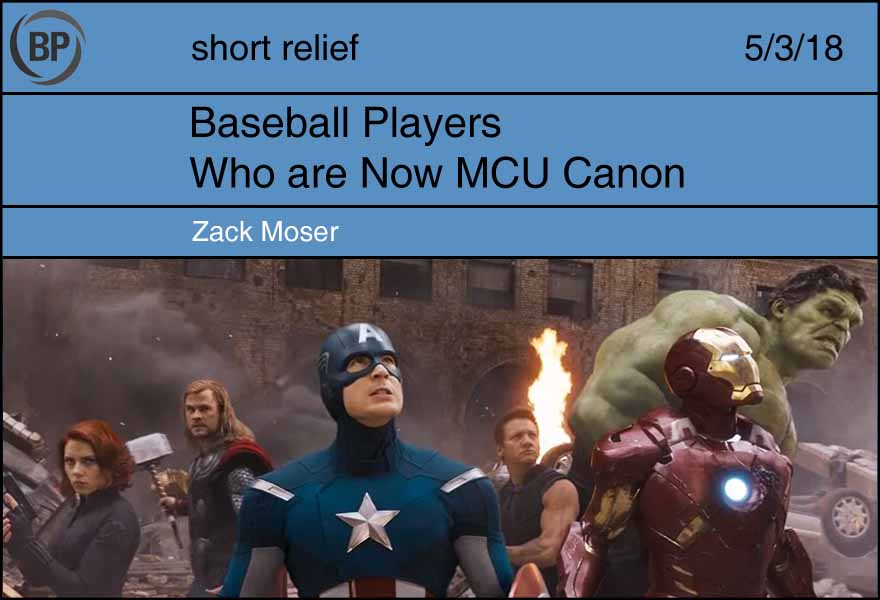 Warning! Extremely minor spoilers for AVENGERS: INFINITY WAR ahead! If you’re into that sort of thing!

The surprise cameo appearance of Tobias Fünke of Arrested Development in Marvel’s Avengers: Infinity War spurred one hairbrained internet theorist to test the limits of “the most ambitious crossover event in history,” ultimately connecting Adam West’s Batman to the Marvel Cinematic Universe. This, of course, opens the door to countless more crossover possibilities, and I have discovered the canonical existence of several baseball players in this universe.

LUIS TIANT: There’s only a few steps from Infinity War to Cheers, as Arrested Development’s crossover with Homicide: Life on the Streets, which crossed over with St. Elsewhere, which crossed over with the jovial Boston-based sitcom. Early on that series’ run, Ted Danson’s Sam Malone made his TV debut covering for Luis Tiant when the former Red Sox ace struggled to make it through acting in a beer advertisement. Former Sam stepped in, naturally, and pitched Fields Beer like no one else could. Now, who wouldn’t want to see El Tiante and Frasier Crane rubbing elbows with Thanos, eh? THAT’S cinema! 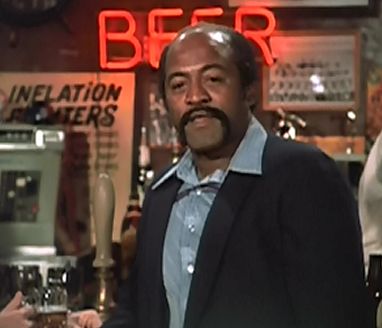 WADE BOGGS: Sox third sacker Wade Boggs made an appearance on a Season Six episode of the beloved sitcom, roping him into the MCU as well. Boggs would fit snugly with the Guardians of the Galaxy, where he could pound dozens of beers while flying through space with Chris Pratt. But, more interestingly, the presence of Boggs makes possible another crossover, since Boggs made an appearance on It’s Always Sunny in Philadelphia, just like…

CHASE UTLEY: The gritty second baseman found himself the object of Mac’s affection in an It’s Always Sunny episode in 2013, and Utley himself later responded to Mac’s very real love letter. This also proves the existence of Philadelphia in the Marvel universe, a fact in doubt until today.

JIM CREIGHTON: Since Homicide’s Detective Munch also appeared on The X-Files, and Mulder and Scully made cameos on The Simpsons, it stands to reason that Homer Simpson’s heroic efforts for the Springfield nine in “Homer at the Bat” are known from Shelbyville to Xandar, from North Haverbrook to Titan. But, lest we forget: Montgomery Burns originally chose mid-nineteenth century star Jim Creighton as his right fielder, before learning that Creighton had been dead for “over 130 years.”

Now, that might have put a damper on Burns’s day, but it invites us to speculate about a possible dream matchup between Creighton’s Brooklyn Excelciors and these guys: 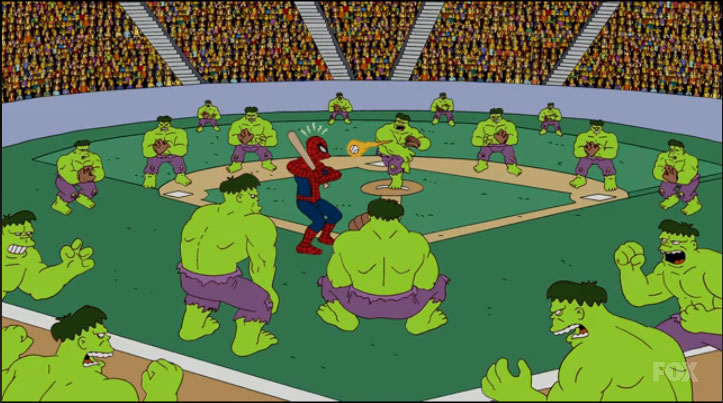 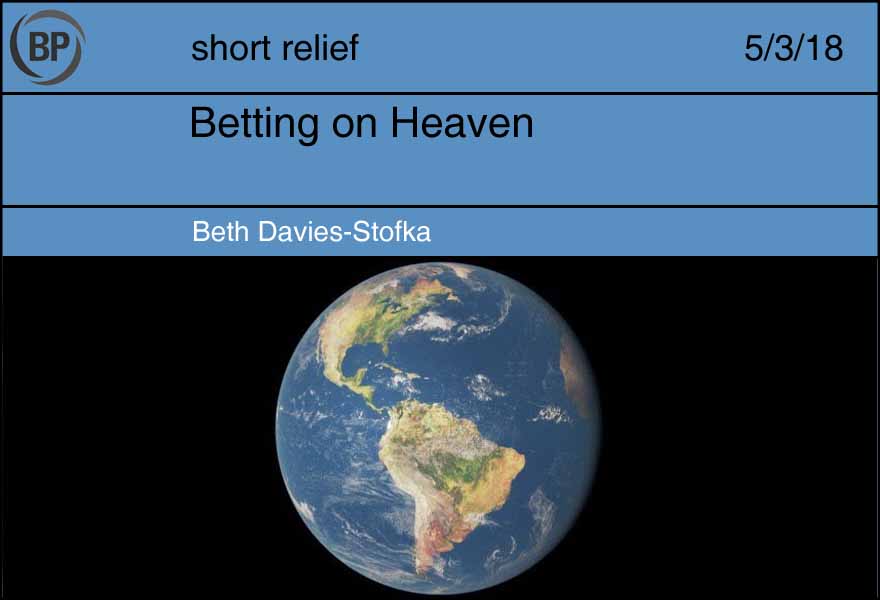 In Christopher Nolan’s Interstellar, the scurrilous Dr. Mann fights “Coop” Cooper for control of the spacecraft Endurance. Watching that scene, my mind wandered off to weigh the numerous factors involved in colonizing planets. What would scientists take to a new colony? Would they take religion? Or grab an opportunity to make a clean slate of it?

The question was so interesting to me that I began using it as a quiz in my Eastern religions class. Every semester, the students’ final challenge is to write a short essay in which they argue for or against taking religion to interplanetary colonies. My students are young adults who will soon be programming computers, serving as financial consultants, running overseas businesses, counseling the mentally ill, and caring for the elderly. And they say things like this:

Conversations involving people with different sets of beliefs will allow for better understanding and therefore more respect. In a society based in mutual respect, each person will practice their beliefs or non-beliefs in peace.

The beautiful thing about humans is that we are singular, independent, and free thinking. Religion has issues and a bloody past and present. Religions are polarizing despite their actual teachings. We need to be understanding, accepting, and caring.

I am deeply encouraged by the values my students express. It doesn’t matter whether they are in favor of bringing religion to remote planetary colonies or not. What matters are the virtues they praise, semester after semester, virtues like mutual understanding, respect, freedom, acceptance, caring, and peace. Students repeatedly emphasize these values in the final quiz, but perhaps more significantly, in all of their assignments. These are the things they truly care about.

It was a terrible thing to hear that two coaches in New Hampshire allegedly conspired to hit a little girl in the head with a baseball. Fortunately, a pair of other coaches blew the whistle before anybody got hurt. Two conspired with evil, and two stood up for the good. Does this mean we have an equal shot at heaven and hell?

I’m betting on heaven. The day should come in every life when we hand the world over to the young. Somewhere along the way, the world should shift from our hands to theirs. It becomes their turn to build families, shape societies, and transform social mores. I can lend a sympathetic ear. I can offer strength when spirits flag. But after years of exposure to the goodness of my students, I’m at peace. The world’s in good hands. 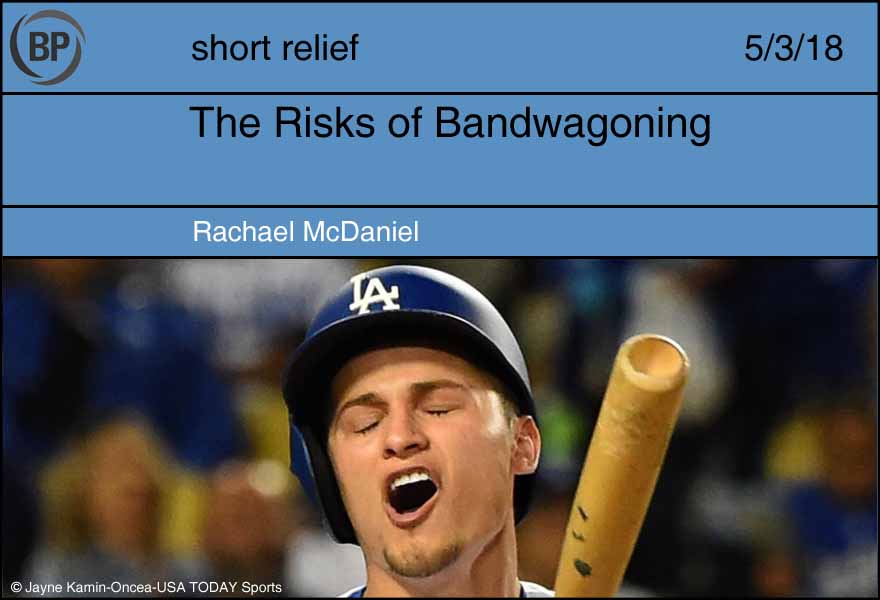 I don’t believe there’s any shame in bandwagoning. I do it all the time. I find myself following good teams more often than bad ones, because it’s more fun to watch good baseball than to watch bad baseball. When the team starts performing poorly, you can just stop watching. It is a very safe emotional exchange, watching a team solely because they seem likely to win in the present moment.

For this reason, I watched a lot of the Dodgers last year. They were just so good, and their home games were at a convenient time for me to watch at the end of the day. My Blue Jays were doing so poorly. It was a pleasant change of pace to spend time with a team so thoroughly dominant.

Then, of course, came September, when the Dodgers took their ridiculous nosedive. This was the time for me as a bandwagoner to stop watching and set my sights on teams whose success was more immediate. But for some reason I didn’t. I kept watching the terrible, terrible September Dodgers. I watched every game of that long losing streak. And when they pulled themselves together enough to make it to the World Series, even though I told myself that I had no rooting interest, could just relax and enjoy the show, I was not able to relax. It was an emotional rollercoaster of an experience, and the Dodgers lost, and I felt genuine sadness.

This season the Dodgers have been beset at all sides by injury and underperformance. They have played poorly. Kenley Jansen and Clayton Kershaw haven’t been their usual selves. Corey Seager is out for the season, Justin Turner’s timeline for return is a mystery. Yasiel Puig is injured. They had that good stretch for around a week there only to sink right back into a four-game losing streak. The Dodgers right now are not the kind of team anyone would choose to bandwagon.

And yet I have sat down and watched almost all of these mostly bad baseball games, even though I know that something bad is probably going to happen, that Hyun-jin Ryu will get pulled mid-game with an arm strain of unknown severity, and that disaster will seem inevitable, and that I’ll spend most of the game feeling frustrated. And then I’ll do it again the next day.