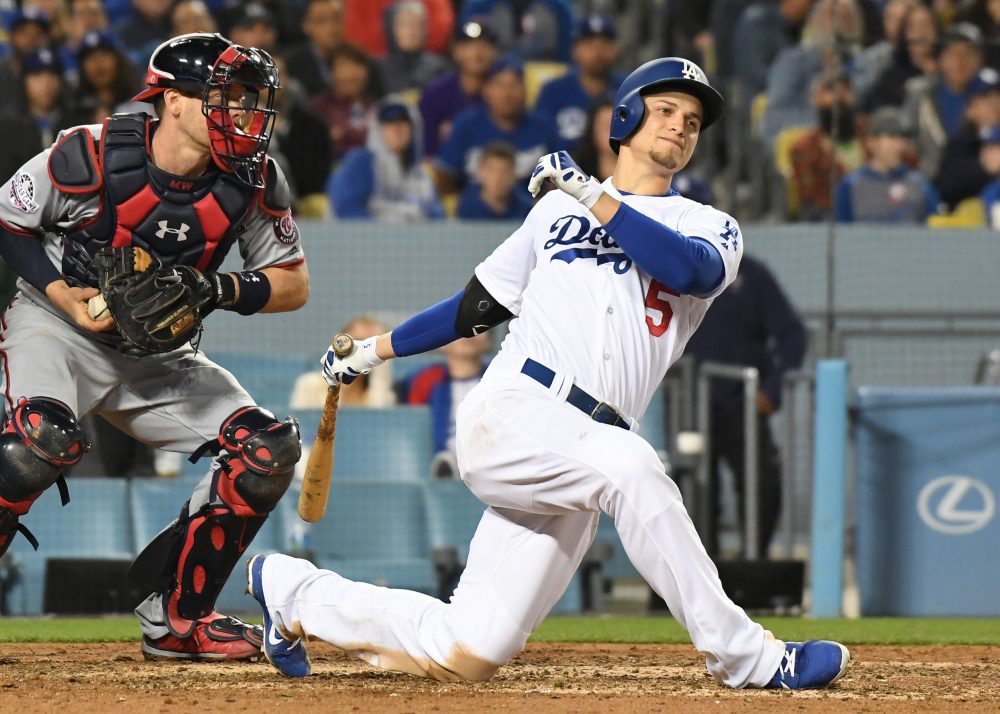 April was already unkind to the Dodgers before the final day of the month brought news that All-Star shortstop Corey Seager will miss the rest of the year following Tommy John surgery. At the beginning of the season, PECOTA projected the Dodgers for 97 wins, BP’s playoff odds gave them an 85 percent chance of making the postseason, and Bovada pegged their over/under win total at 96.5—all the highest figures in the National League. And now? Their projected win total is 86, their playoff odds are 47 percent, and anyone who bet the “under” can start counting the money already.

Of course, it’s all relative. Having a 47 percent chance to reach the playoffs one month into the season still puts Los Angeles ahead of all but three teams in National League, but that probably won’t do much to calm Dodgers fans who rightfully had much bigger expectations given that one of those three teams is the division rival Diamondbacks. Seager joining Justin Turner, Yasiel Puig, Logan Forsythe, and Rich Hill on the disabled list after a 12-16 opening month has actually turned “are the Dodgers in trouble?” into a legitimate (or at least semi-legitimate) question.

Seager has been one of the best players in baseball since the moment he stepped onto a big-league diamond in September of 2015, hitting .302/.372/.494 in 355 games along with playing capable defense at an up-the-middle position. He’s batted second or third in the Dodgers’ lineup nearly that entire time, he’s fared well versus both righties and lefties, and he’s come through in clutch situations. WARP rated Seager as baseball’s best shortstop in both 2016 and 2017, and even while struggling by his standards this year before being shut down he still ranked fifth-best at the position. Among all shortstops since 2016, only Carlos Correa has a higher Win Probability Added.

Or, as Seager himself put it: “This obviously sucks.”

It’s a huge loss, and one that might cost a typical team 4-6 wins over the final five months of the season. Those are games the Dodgers can hardly afford to see slip away given their plummeting playoff position, but fortunately they aren’t a typical team. Andrew Friedman and company have placed an incredible emphasis on adding MLB-quality depth, using their considerable resources to stockpile “extra” players who might otherwise have bigger roles elsewhere. They’ve also focused on acquiring and developing position players with defensive versatility, which magnifies that already impressive depth even further by allowing them to mix and match to fill in as needed.

Many teams would be scrambling to replace their starting shortstop, particularly one as crucial as Seager to their overall success and particularly given their crowded disabled list, but the Dodgers have multiple options that are solidly above the replacement-level threshold. For now they’ve shifted 2017 breakout star Chris Taylor to shortstop—which is his original position and one he’s handled well when given an opportunity—and turned to top-101 prospect Alex Verdugo to fill the outfield opening, with Joc Pederson, Enrique Hernandez, and (once he’s healthy) Andrew Toles available to assume bigger outfield workloads if needed. Puig may also rejoin that mix by the end of the month.

If the Dodgers eventually sour on Taylor at shortstop, they could shift him back to the outfield and instead turn to Hernandez in Seager’s old spot after three years of using him as a play-everywhere super-utility man who crushes left-handed pitching. Even their immediate Seager roster replacement, 26-year-old journeyman Breyvic Valera, is a career .327/.391/.447 hitter with more walks than strikeouts at Triple-A. And once Turner and Forsythe return from the disabled list, likely before the end of May, the infield options expand even further.

Whatever the case, the gap from Seager to his replacements is not as massive as WARP would indicate because of the Dodgers’ depth and versatility. None of which takes away from Seager’s immense value, or even suggests that his absence won’t have a huge negative impact, but the on-paper loss might be 2-4 games instead of 4-6 games and means any outside help would have to be a damn good player to offer significant improvement. “We’re going to have a pretty high bar, if we go outside the organization,” general manager Farhan Zaidi told Andy McCullough of the Los Angeles Times. “We still feel good about the lineup we can field on an everyday basis.”

Those in-house options may also keep the Dodgers from feeling they have to go after Manny Machado at all costs, although the Orioles star would add a dimension that solid but unspectacular players like Taylor or Hernandez simply can’t. Baltimore is 8-20 and Machado is an impending free agent hitting .366/.450/.688, so the Orioles seem likely to listen if the Dodgers come calling. If the Orioles feel they have a legitimate chance to re-sign Machado on the open market—or sign him to an extension before he hits the open market, although that’s assumed to be a non-starter—then they may be hesitant to send him to a big-market team with whom he might fall in love over the next five months (and a possible playoff run). Or maybe that’s overthinking things, with Seager due back around Opening Day and Turner signed through 2020.

If the Orioles do look to trade Machado, they would at the very least need more in return for him than the value of a first-round draft pick, which is what they would receive next June if he declined their qualifying offer and signed elsewhere. Any offer the Dodgers—or another team—makes for Machado, now or in July, would have to pass the “is this clearly better than a first-round pick?” test right off the bat. (Any team acquiring Machado would not be eligible to receive compensation if he signs elsewhere.) According to the BP prospect team, the Dodgers have a top-10 farm system that includes seven top-101 prospects, led by right-hander Walker Buehler, the aforementioned Verdugo, and right-hander Yadier Alvarez.

It’s also worth noting that the Dodgers avoided spending freely this offseason with an eye on getting under the luxury tax threshold to reset their status (and tax rate) as repeat offenders. Their current luxury tax bill is around $182 million, the threshold they want to remain under is $197 million for the entire season’s worth of spending, and Machado’s contract has about $14 million left on it. The math works, but just barely, and adding further pieces after adding Machado would prove very tricky. It’s also possible the Dodgers could get the Orioles to take on an unwanted contract or two as part of the deal, loosening the luxury tax grip at the expense of what would surely be a more substantial package of prospects heading to Baltimore.

Dodgers ownership is free to ignore the luxury tax and just spend whatever it takes to improve the team, of course, but they’ve been free to do that this entire time and clearly made an effort not to do so during the offseason. Perhaps the Seager injury, combined with the poor April, could change their view of what’s important in the short and long term. Don’t count on that, though. Whatever plans the Dodgers have for next offseason’s star-studded free agent market rely an awful lot on their spending not being taxed heavily, and the only way to avoid that in 2019 and beyond is to avoid the luxury tax threshold in 2018.

If the Dodgers went 16-12 in April, instead of 12-16, and if they were still projected to cruise to the playoffs, then waiting out the Orioles and making their push for Machado (and the prorated money on his deal) in July rather than in May would seemingly be the obvious move. That would give them time to get the rest of the infield healthy, and to assess how things stand with Taylor and Hernandez manning shortstop. However, they no longer have the luxury of cruising, or of assuming that one or two wins won’t play a huge factor as they try to chase down the Diamondbacks and avoid the Wild Card game coin flip. You can afford to make decisions that aren’t based on maximizing every possible victory in 2018 when you’re projected for 97 wins, but that doesn’t work as well when you’re projected for 86 wins and just lost the league’s best shortstop.