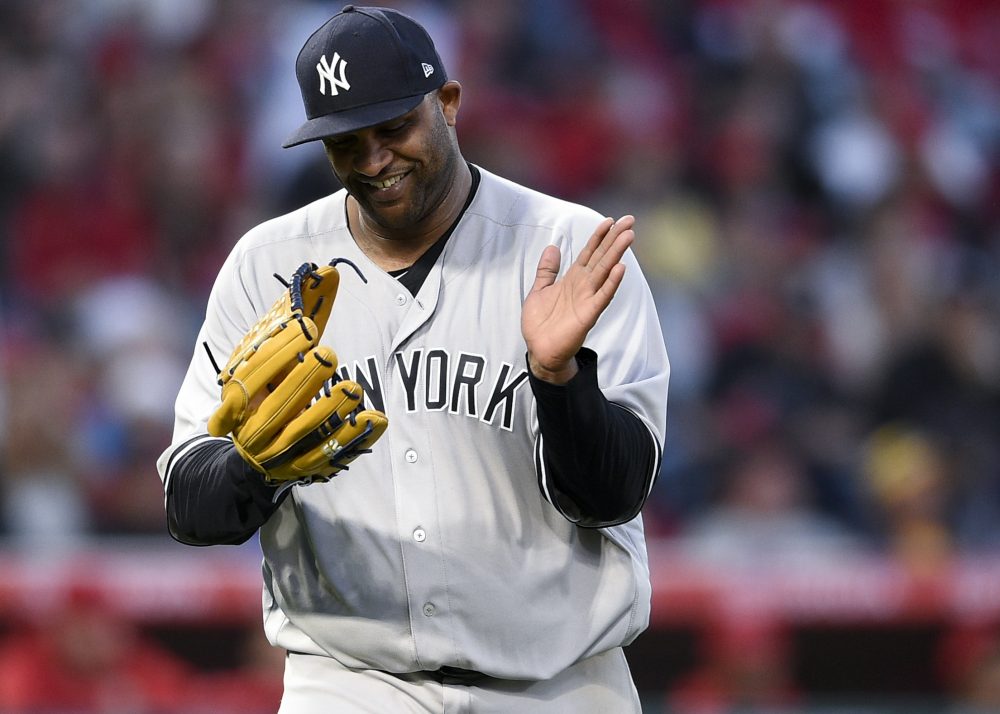 These are words the rest of baseball doesn’t want to hear, but here it goes: the Yankees have won nine games in a row and have swept two series in a row. This weekend they swept the Angels in Anaheim for the first time since July 2003. To give you an idea of just how long ago that was the Yankees traded for their current manager Aaron Boone on the day they completed the sweep.

Nearly two weeks ago, the Yankees were humiliated by the Marlins 9-1 at home and, ever since, they’ve been on a roll. They won three out of four against Toronto, swept Minnesota in a four-game series and flew out west and swept the Angels in three. And how are they winning these games? Well, it depends on the day. Sometimes it’s a come-from-behind win that comes in extra innings like Friday night. The Yankees found themselves down 3-2 heading into the top of the ninth inning, their six-game winning streak on the line. Gary Sanchez walked, rookie Miguel Andujar doubled—because that’s all he does—which advanced Sanchez to third and after Angels reliever Keynan Middleton intentionally walked Gleyber Torres, Boone pinch hit Brett Gardner for Ronald Torreyes. The move paid off because Gardner hit a sac fly to tie the game. David Robertson pitched a 1-2-3 bottom of the ninth, and the game went into extra innings.

In the 10th, Aaron Judge hit a fly ball to Kole Calhoun in right, and then Didi Gregorius stepped up to the plate.

Gregorius smacked his 10th home run of the season and gave the Yankees a 4-3 lead. It was a lead they would not relinquish. Their streak would remain intact and increase to seven games.

On other days, the Yankee offense is the reason why they win games. Like on Saturday night, when they scored 10 runs in the first two innings and beat the Angels, 11-1. Starter Masahiro Tanaka had a 5-0 lead before he even walked onto the mound, so he had a comfortable night. He did surrender a home run to Zack Cozart because it wouldn’t be a Tanaka start without a home run, but overall, he was sharp and picked up his fourth win of the season.

And then there are the days when a good pitching performance is a catalyst for a victory, like CC Sabathia’s outing Sunday night. The oldest guy on the Yankees’ pitching staff went seven innings and gave up one run on five hits with a walk and four strikeouts. It’s the only earned run Sabathia has given up since coming back from the disabled list April 19. His ERA is down to 1.71. Yes, it’s still a small sample but what Sabathia’s doing so far this season is remarkable. A couple of years ago people thought Sabathia was nearing the end of his career. Now, he has reinvented himself as a pitcher who likes to throw his slider more than his fastball because he can’t dial it up to 97-98 anymore, and he’s able to get guys out on soft contact and swinging strikeouts thanks to that slider and also his changeup. So as long as his balky knee holds up, Sabathia could pitch into his 40s if he keeps up this type of performance.

The Yankees only needed two runs to win Sunday night, and Gary Sanchez provided the offense with his seventh home run of the season.

New York is in the midst of a rough stretch of games on the schedule. On Monday night, they begin a four-game series with the Astros in a rematch of last year’s American League Championship Series. After that, it’s a rematch of the American League Division Series when the Indians go to New York for three games, and after they leave, the Red Sox will be in town for three games. So far, they passed their test in Anaheim with flying colors, but they still have a few more hills to climb before they can relax a bit.

There’s another streak happening in baseball. The Diamondbacks have opened the season with nine series wins in a row. No National League team has accomplished this feat since 1907. Back then, the Cubs did it, and they went on to win 107 games and back-to-back World Series titles. The D-Backs had nine-series winning streaks before in 1999 and 2007 but never to open a season. The last team in the Majors to do it? The 2001 Seattle Mariners, who went on to win 116 games but lose in the American League Championship Series to the Yankees.

The Rays were also on a winning streak heading into this weekend and were looking for their ninth win in a row but lost 4-3 to the Red Sox on Sunday. It was the Red Sox’s 20th win of the season. They’re the first team in the majors to reach that plateau. Arizona (19-8) had a chance to do it but lost 3-1 to the Nationals.

Let’s talk some pitching, because a lot of good stuff happened this weekend. Like Sean Manaea making his first start since his no-hitter and throwing no-hit ball for the first three innings. Sure, that seems like nothing, but he held the Astros to an unearned run in his outing which means he has not allowed an earned run in his past 18 innings of work, and that brings his ERA down to a minuscule—and American League-best—1.03. Manaea has also completed at least seven innings in five of his six outings. His 14-inning hitless streak broke an Oakland record held since 1968 by John “Blue Moon” Odom.

Rookie Nick Kingham was called up by the Pirates to pitch against the Cardinals on Sunday, and the 26-year-old Las Vegas native threw 6 ⅔ perfect innings. He struck out nine over his seven scoreless innings and picked up his first major-league win as the Pirates blanked the Cards 5-0 to complete a three-game sweep. Kingham is only the second pitcher in the past 100 years to make his debut and only allow one hit, not walk anyone and strike out at least nine batters. Johnny Cueto did it in his debut 10 years ago, but he allowed an earned run.

It was their fifth win overall, and it’s the first time in their history that the Pirates have won 17 games by the end of the April.

The Giants and Dodgers played a doubleheader Saturday, and the Dodgers won the first game 15-6. But that wasn’t the big story of that game. No, the big story was Pablo Sandoval being called upon to pitch in the top of the ninth inning. Sure it seemed funny at first but, dare I say, he was brilliant. Panda worked quickly and was efficient. He pitched a 1-2-3 inning with three ground-ball outs and dialed it up to 87 while also dialing it down to a nice 69 on a curveball.

Francisco Rodriguez will be playing baseball this year but not in the majors; he signed with the independent Long Island Ducks. He was released by the Phillies in March after a poor showing in spring training. He pitched for the Tigers in 2017, and in 28 games he was 2-5 with a 7.82 ERA. He saved seven games and had six blown saves. He’s fourth on the all-time saves list with 437 in 16 seasons.

Defensive Play(s) of the Weekend

The Angels might have been swept by the Yankees this weekend, but right fielder Kole Calhoun made two spectacular catches Friday.

What To Watch On Monday

In Cleveland, Cole Hamels will be facing Trevor Bauer. The Rangers are putrid at home (4-12 so far this season) and are better on the road, so this could be an exciting series. Cleveland is 8-6 at home, so not exactly dominant. (6:10 p.m. ET)

In a rematch of last year’s ALCS, Sonny Gray is up against Charlie Morton in the first of four games at Minute Maid Park. The Yankees are looking to extend their winning streak while Houston is looking to continue their dominance over the Yankees in Houston. (8:10 p.m. ET)