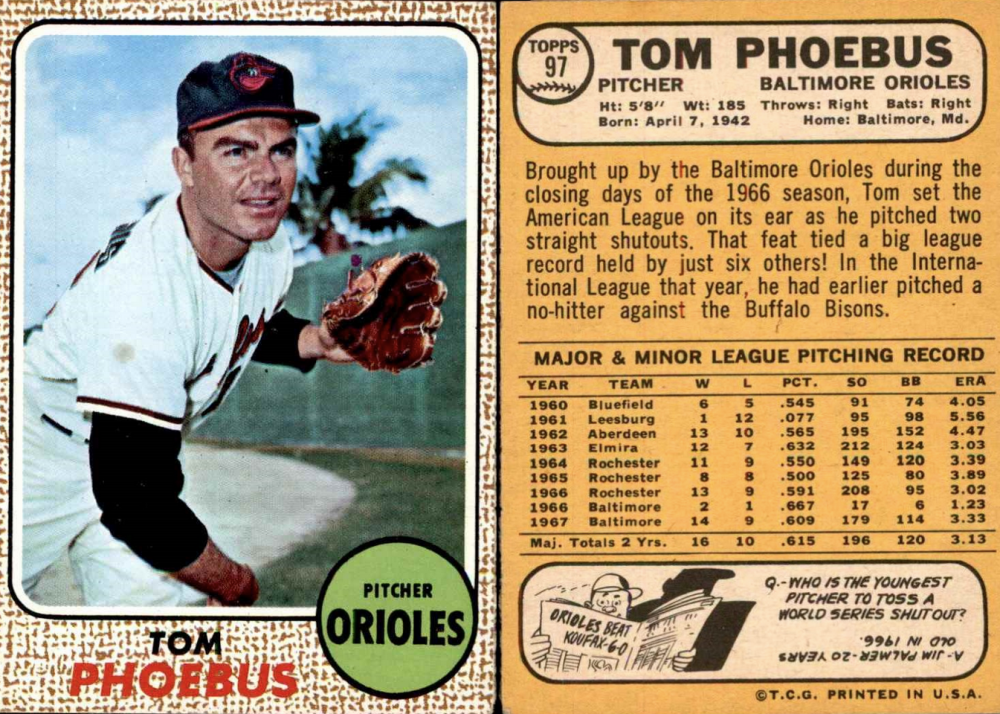 On April 26, 1968, Orioles right-handed pitcher Tom Phoebus wasn’t feeling well. The team’s Opening Day starter had a 2-1 record and 2.18 ERA over three starts, and had struck out 20 batters in 20 2/3 innings. But Baltimore’s star right fielder, Frank Robinson, had come down with the mumps, and there were fears that others on the club would be infected. Phoebus was given permission to leave the ballpark early that evening to get rest. The next day, despite a lingering sore throat, he took the mound against the defending champion Red Sox after an 83-minute rain delay. And 110 pitches later, he’d pitched the second no-hitter in Orioles history, and the first of the 1968 season.

There were two close calls for Phoebus, who walked three and threw a wild pitch. In the third inning, Boston second baseman Mike Andrews bounced a ball off Phoebus’ glove. Orioles shortstop Mark Belanger grabbed the ricochet and threw to first baseman Boog Powell for the out. Andrews was certain he’d beat the throw and was ejected for arguing the call. In the eighth inning, Boston shortstop Rico Petrocelli hit a line drive to third baseman Brooks Robinson’s left, and Robinson dove to make a sensational catch. Robinson’s bases-loaded double with two out in the third inning was all the support Phoebus needed in a 6-0 Baltimore victory.

Phoebus was a good pitcher, having won the Sporting News Rookie Pitcher of the Year award the prior season. Still, it was very clear to this point that pitchers had the upper hand in the young season. Way, way upper hand. In April, batters had a .230/.294/.341 slash line—basically Billy Hamilton‘s current career line. Excluding the World War II-depleted 1943 season, that was the lowest April batting average and on-base percentage since 1909, and the lowest post-deadball slugging percentage. Twelve of the 20 teams had ERAs below 3.00 and 21 percent of all games were shutouts. (Frame of reference: 14 percent of games this April have been shutouts.)

The defending champion Cardinals finished the week 12-5, two-and-a-half games ahead of the Giants. On April 26, the team’s ace starter, Bob Gibson, was awarded his first win of the season in his fourth start. He finished the month 1-1 with a 1.97 ERA. The defending American League champion Red Sox were faring less well, 8-7 through games of April 29. Carl Yastrzemski, 1967 MVP, had a .964 OPS but his teammates were batting .189 with a .283 slugging percentage.

On Friday, April 26, the White Sox won their first game of the season, 3-2 over the Twins, after 10 straight losses. Tommy John got the win. But they finished the week ending April 29 with a 2-11 record, the worst in the majors.

The White Sox weren’t hitting—.193 batting average and .258 slugging percentage—but that wasn’t a surprise. They hadn’t hit well in 1967, either (last in the AL in OPS, second-to-last in runs scored), when they were only a game out of first place with four games to play before finishing two back of the Red Sox.

The bigger problem for Chicago was its pitching staff. White Sox pitchers had a minuscule 2.45 team ERA in 1967, nearly three-quarters of a run better than the second-place Twins (3.14). Starters Gary Peters, Joe Horlen, and Tommy John all had ERAs below 2.50, as did four relievers (Bob Locker, Wilbur Wood, Don McMahon, and Hoyt Wilhelm), each of whom logged 89 or more innings.

At the other extreme, Atlanta, through April 29, led the majors with 20 home runs despite three of its top sluggers missing time due to issues that sound like they’re out of the 19th century:

How to Pitch to Mays

One of the leading N.L. scouts says the popular concept on how to pitch to Willie Mays is all wrong. “They think hard stuff can be blown by him because he’s getting old, but it can’t,” says Cal McLish. “They think he can still hit the breaking stuff, but that’s not so either. The way to work on him is to brush him back with the fast ball, then curve him.”

And fifty years ago, a Milwaukee businessman was honored[2]:

Allan (Bud) Selig, leader of the campaign to bring major league baseball back to Milwaukee, was honored by the Varsity Club [of Milwaukee] at a “King for a Day” luncheon April 24.

We’re paying tribute to Bud Selig, a really great Joe.
Who’s putting Milwaukee baseball in high gear from low.
He’s fighting to join the major leagues with the Brewers.
Some guys are talkers. Bud is one of the doers.

You need to be logged in to comment. Login or Subscribe
Zach Nadel
Great idea, and well written. Really enjoying this series.
Reply to Zach
Rob Mains
Thank you, Zach!
Reply to Rob