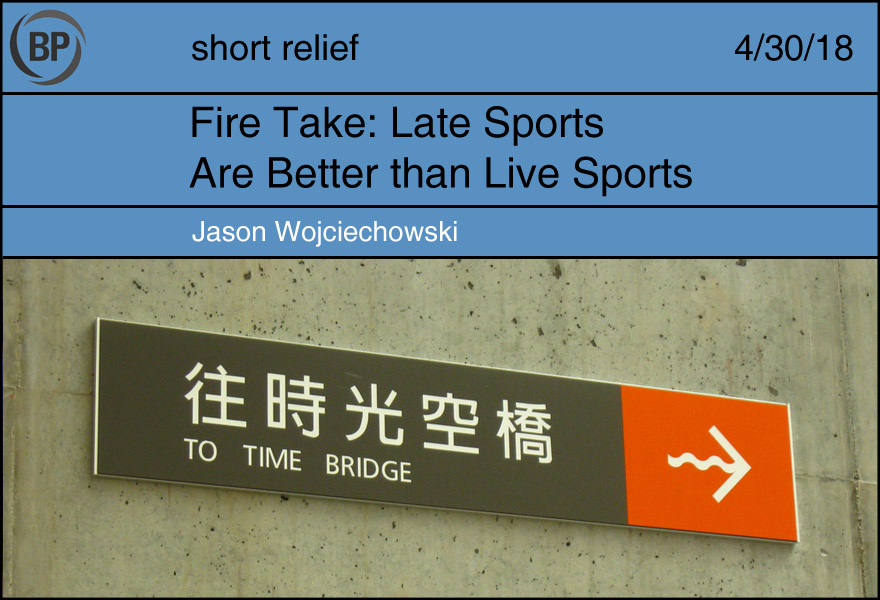 Live sports are nonsense. Doing anything on anybody else’s schedule is nonsense, really. We spend our lives following schedules set down by other people, for school, for work, for family. What we do with our precious free time should not be at the whim of what some billionaire baseball owner thinks is the appropriate time to watch a game of baseball. If I want to watch baseball at 6:30 in the morning instead of at 7:00 in the evening, and if I want to do that because I prefer a time-shifted day where the bulk of my work gets done from late morning to early evening, and I have chores to do and those are better done in the evening than the morning, well then I’m going to watch baseball at 6:30 in the morning, and all the moaning in the world about the immediacy of live sports and the community of fans all doing the same thing at the same time is so much hoohah designed to get you to pay for a cable package, 99 percent of which you don’t want in the first place.

Belated sports are also a chiller experience because you probably know what happens. And even if you don’t know what happens, as I often don’t, there’s still a subtle psychological barrier to being overly invested in real-life events that are presented as if they are occurring in the present (unlike, say, a documentary film) while they have actually already occurred. You’re going to see heartbreak and anxiety and triumph, but you’re going to see it twice mediated, through the screen and then through time, rather than through neither (in-person attendance) or just the former (live at-home viewing).

All of this leads, for me, to a healthier relationship with baseball, even while at the same time it allows me to obsessively view every single inning my chosen team plays. “I’m going to a movie” is not an excuse to not watch baseball, and yet when I’m home the next morning watching baseball, I’m not as emotionally invested in outcomes as I once was; I can better watch for the stupid stuff like how deeply weird Khris Davis seems to be. I can get annoyed at Chris Hatcher for throwing more batting-practice meatballs, but what’s the point getting annoyed at something that’s already dead and done? Watching sports late crystallizes how deeply and beautifully pointless the game is, and that has made all the difference. 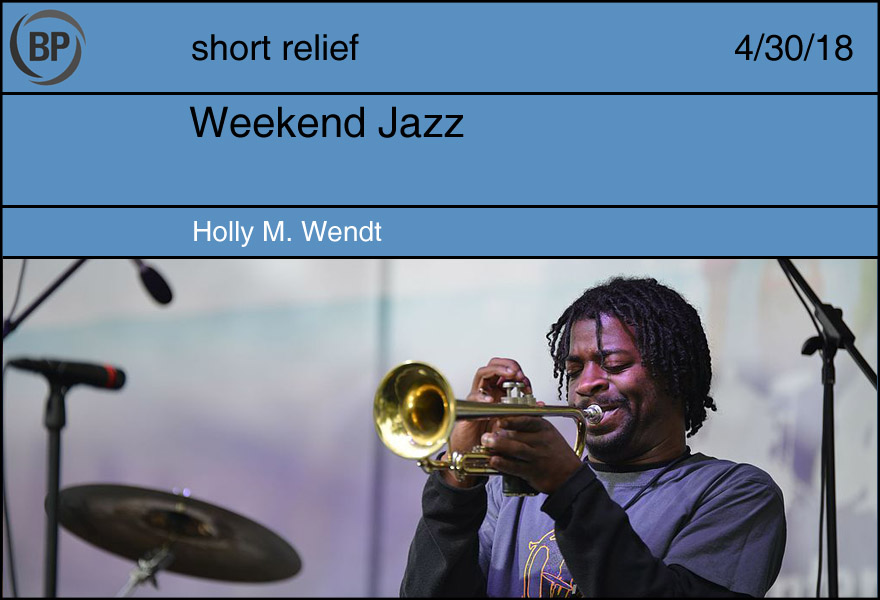 Silver-muted notes skirled through the concert hall, bass drum and electric bass throbbing in the undercurrent, guided and occasionally abandoned by trombones pivoting to melody, and the humming clarity of the vibraphone rang beside it all. Across eleven planned numbers and one playful, delighted encore, twenty-five musicians and a vocalist carried and strew songs all across my Friday night, tunes by Les Hooper and Joe McCoy, Freddie Hubbard and Thad Jones, and such absolute staples as Duke Ellington and otherwise-known music royalty Lennon and McCartney.

In a jazz performance, though, it’s not enough to simply play the song as written; the genre is improvisational at its heart, and so the audience was treated to the deft and delicate handoff of the solo, over and over: to a single trumpet or flugelhorn, to the bari sax or bass guitar, occasionally, briefly, to the young man behind the drum kit, and longer to the guitarist who could have stolen the show were it not for large ensemble etiquette and the director’s emphatic hands. All push and pull, exuberant digits marking countdowns and crescendo, the director’s hands made visible every leaning note, every aural door closed and opened again to another room.

In baseball, there’s little space for the solo. Many individual acts make up a game, of course, but it’s not much of a platform for extended riffs. Maybe a rundown counts—a true space for experimentation and uncertainty, a syncopation of 5-4-6-1-5-3, with longer beats to dart and pursue, feint and finally commit—or a twenty-one pitch at-bat, but mostly, it’s a game played on a far more rigid frame. The very rhythm of the game is as predictable as a waltz—three outs and three outs to an inning, three innings and three innings and three innings to a game.

But every great once in a while, the rhythm shifts and the energy hangs suspended, some player become so virtuoso an instrument that the game must simply wait for its turn to come back in.

On Saturday night in Philadelphia, Freddie Freeman came to the plate in the top of the third, Ender Inciarte aboard. Atlanta had scored two in the inning already, product of three consecutive singles and a sacrifice fly, and the game carried the feeling of another kind of looming expectation, made more dire in an instant: Freeman crushed a Nick Pivetta fastball to center. From his ready fielder’s rest, Odubel Herrera chose an angle and ran.

The game’s music quieted beneath the high, arcing note of his leap, his defiance of gravity like a horn player’s impossible breath. How long could it and he hang there? Long enough to meet the ball’s percussion far above the fence’s confines, leather to leather like a hi-hat’s snap, long enough for the force and sway of it to carry arm and mitt into the green hush of branches, to spin him back to earth in a falling scale. He tossed the ball back in, as neatly as any conductor might want, so the game’s song could continue.