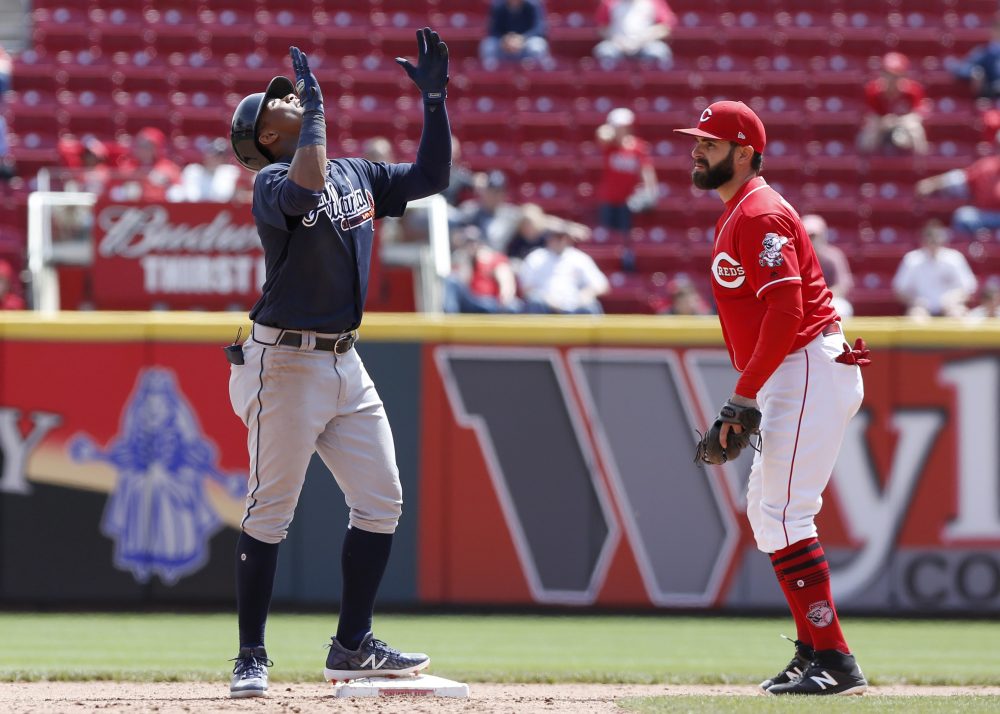 Ronald Acuna made his much-anticipated major league debut Wednesday and didn’t disappoint as he collected his first career hit and the first run of his career as well. It was a solid debut, if not spectacular. On Thursday, Acuna dared to go for the spectacular.

His first at-bat against the Reds ended up fitting the bill as Homer Bailey tested the game’s top prospect with a slider that was right in the middle of the strike zone. Acuna passed the test with flying colors and gave one of the Braves fans in attendance at Cincinnati an extremely memorable souvenir.

Acuna wasn’t done there as he ended up adding a single and a double to his tally, which means that the Venezuelan sensation was only a triple away from the cycle in his second career game in the majors.

‘Twas a good second day in the bigs for Ronald Acuña Jr.#ChopOn pic.twitter.com/3DF09axE3T

While Acuna’s power hasn’t been in question during his rise to the big leagues, one Braves prospect who had questions surrounding his power was Ozzie Albies. He’s set a franchise record for extra-base hits by the end of April and he did it in style.

Albies also added a double in the ninth inning to help put the game out of reach against the Reds. Just like that, the two youngest players in baseball both combined to power their team to victory. Probably the happiest person in the world to finally have some serious help again is Freddie Freeman, who was somehow able to fly under the radar while hitting three doubles in the game.

It’s been an encouraging month for the Braves and it appears that the team’s rebuild is truly starting to bear fruit. There won’t always be exciting days like this on the immediate horizon for the Braves, but it’s clear that they’re much closer to being an honest-to-goodness good team rather than a bad one.

The Brewers went into action Thursday on a hot streak of eight consecutive wins. It’s been sunshine and lollipops for Milwaukee during that span and it’s clear that the team is loose and having a great time playing this lovely sport. So of course once they took a trip to Wrigley Field to see the Cubs, things got dark and sour in a hurry. The game was scoreless until the sixth inning, which is when Kyle Schwarber golfed a cutter from Chase Anderson over the ivy in right field for the game’s only run.

The scoreboard read 1-0 in favor of the Cubs, but you could argue that it really ended 2-0 after this tweet.

You need to have fans in your park in order for them to cheer. https://t.co/Y3yr6n0whk

Cleveland and the Mariners played a very exciting game, and that was to be expected once we saw that the two teams would have long-haired doppelgangers facing off against each other.

When you both choose the same character in Mortal Kombat. #Mariners pic.twitter.com/CT2q8ePleG

As far as the actual baseball goes, it was an exciting back-and-forth affair that saw the Mariners go up by four before Cleveland came back and tied it up at four. Then with two outs in the top of the eighth inning, Seattle came back to life and got a rally going after a double from Nelson Cruz. Then Kyle Seager followed it up with a double of his own to plate the game’s winning run: The pinch-running Ichiro. You will never get rid of him.

Now it’s time to get into the walk-off portion of yesterday’s action. Congratulations are in order for the Pirates, Cardinals and Yankees, who all ended up winning in their very last at-bat. In the case of the Pirates, it was particularly dramatic in that it came off the heels of a review. Corey Dickerson hit a long fly ball to right field and while it was high enough to leave the park, the question was whether or not a fan was the one to make it long enough to get out of there.

The replay crew decided that it wasn’t interference, so the Jolly Roger flew proudly over PNC Park at the end of the day.

Elsewhere in the NL Central, the Cardinals and Mets had an intense battle over 13 innings, which is to be expected when they had Carlos Martinez and Noah Syndergaard starting the game for them. Indeed, Syndergaard made it into the eighth inning with only one run given up, while Martinez went six innings and only gave up one run, himself. The game livened up from an offensive standpoint in the latter stages of the game, which is when the Cardinals scored in the bottom of the eighth to tie it up at 2 and then both teams scored in the 10th.

The Mets scored their run with a bases loaded walk that sure seemed like a backbreaker. If we’re all being honest here, there isn’t much that says “This is going to be a bad day for us,” more than a bases-loaded walk in extra innings.

Jose Lobaton walks with the bases full to score Jay Bruce and give the Mets a 3-2 lead in the top of the 10th inning (00:29)

In the bottom half of the 10th with St. Louis down to its last out, Jose Martinez hit a long fly ball to center field that nearly sent the fans home early.

Jose Martinez hits a game-tying RBI double to deep center to score Tommy Pham, tying the game at 3 in the 10th inning (00:55)

Instead, they had to stay at the ballpark for three more innings, which is when Dexter Fowler finally ended the game with a single to right that allowed Jose Martinez to slide into home with a victory for the Cardinals.

Dexter Fowler drives in Jose Martinez with a walk-off RBI single to right as the Cardinals win 4-3 in the 13th inning (00:32)

For six innings, it sure didn’t seem like we were going to see any walk-off action at Yankee Stadium. That’s because the Twins finished the sixth with a three-run lead and had gotten a great start from Kyle Gibson, who even took a no-hitter into the sixth inning (in addition to 10 strikeouts).

Kyle Gibson strikes out a career-high 10 batters and takes a no-hitter into the 6th inning in his outing against the Yankees (00:56)

However, once Gibson left the game, things immediately got better for the Yankees. A Giancarlo Stanton double in the seventh eventually led to a sacrifice fly from Aaron Judge to put them on the board and then in the ninth, Miguel Sano began to feel the heat over at third base. A bad throw from Sano allowed Didi Gregorius to lead off the inning by reaching second base, then he had trouble fielding a tricky grounder that allowed Stanton to reach. Then Gary Sanchez ended it all with a moonshot to left field to make sure that the Yankees participated in Walk-It-Off Thursday.

The Diamondbacks picked up a comfortable 8-2 victory against the Phillies and when it was 3-0, Matt Koch flashed his glove on the mound with one of those plays that you had to really be paying attention to or you would have missed it in the blink of an eye.

Nearly a week ago, Sean Manaea shocked the baseball world by no-hitting the red-hot Red Sox. If that was an already difficult task to pull off against extremely tough opposition, then things aren’t going to get much easier for him on his very next start. This time, he’ll have to go from Boston’s bats to the potent and high-powered lineup that belongs to the Houston Astros.

To make the task even tougher for the Athletics, they’ll have to deal with Dallas Keuchel on the mound. While his initial 2018 cFIP and DRA numbers aren’t quite as low as what we’ve expected from him throughout his career so far, his ERA and FIP are getting close to those levels. With that being said, Oakland isn’t exactly putting a tee-ball lineup out there, so this should be a fascinating game (and series) to keep an eye on. (8:10 p.m. ET)