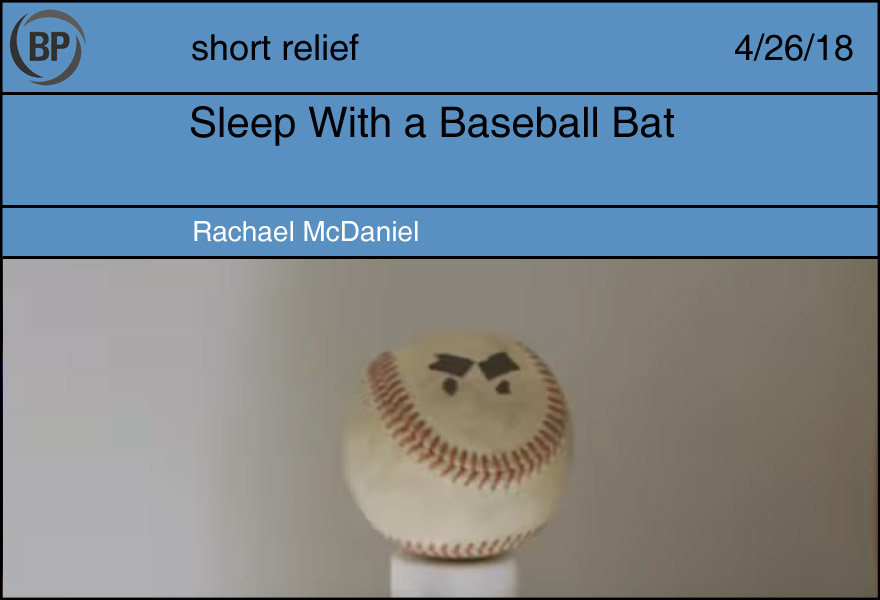 The recent controversy surrounding Ken Rosenthal’s interview with Kevin Pillar about his “recovery” from getting caught yelling a homophobic slur last year got me thinking about my own position in the world of this sport. There’s always some element of code-switching that goes on when I sit down to write about baseball.

It’s not that talking about baseball comes unnaturally to me — any one of my baseball-uninterested friends can attest to how readily I will shoehorn a baseball anecdote into an otherwise unrelated conversation. But the experiences and cultural language of the people I interact with in my real, everyday life, my friends and peers and myself, form a demographic that is so extraordinarily far removed from the demographic that consumes most baseball content that the two might as well exist in different world. It’s a gap that Pillar, when he met with a group of queer youth to educate himself on the consequences of his actions, seemed to be genuinely surprised by.

The gap is partially generational in nature, obviously, but it runs deeper than that. It’s formed by the experience of being deliberately isolated, repressing yourself for your own safety, pushed to the margins of any social space, taking not even the love of your own family. You cling to the things that make you feel better, songs and plays and TV shows. You read about the community your culture created in the past; you turn ugliness and hatred into a love of beauty and joy, creating your own world outside the walls of the places that won’t allow you in.

Sports is an area in culture that has historically been particularly hostile to people like me. It’s not like art or theater or music. Every so often something in baseball will remind me pointedly that I am not its intended audience. And while it’s not a reminder I really need, it does always bring me back to reality a bit. Like, okay. I can’t relax just yet. I have to be ready to defend myself.

So while I try not to water myself down per se, I think very hard about what I say here and how I say it. I don’t want to alienate anyone. I want baseball readers to understand that perspectives coming from as apparently unexpected a place as mine can be intelligible and relatable to them; I want people who know me from blogging about theater and gay indie bands to understand how delightful and meaningful sports can be. I still keep my respective online presences separate. I don’t post selfies because I don’t want anyone to see the way I look and choose not to take my baseball thoughts seriously. That has happened enough to me in real life! I want you all to get to know me as a person before me before you decide that I won’t have anything valuable to say. And that means I have to be selective about how present I am. I have to be subtle.

I mean all this only as an observation, not really as a complaint. I’m glad I get to do this. I know that the walls artificially constructed to make it seem as though baseball fandom belongs to some people and not to others will disintegrate, and I won’t have to be as nervous or careful anymore. And for every slur-yelling incident now, there’s a song about navigating queer anxiety and trauma that references baseball as easily as it does Car Seat Headrest. The walls are getting weaker. 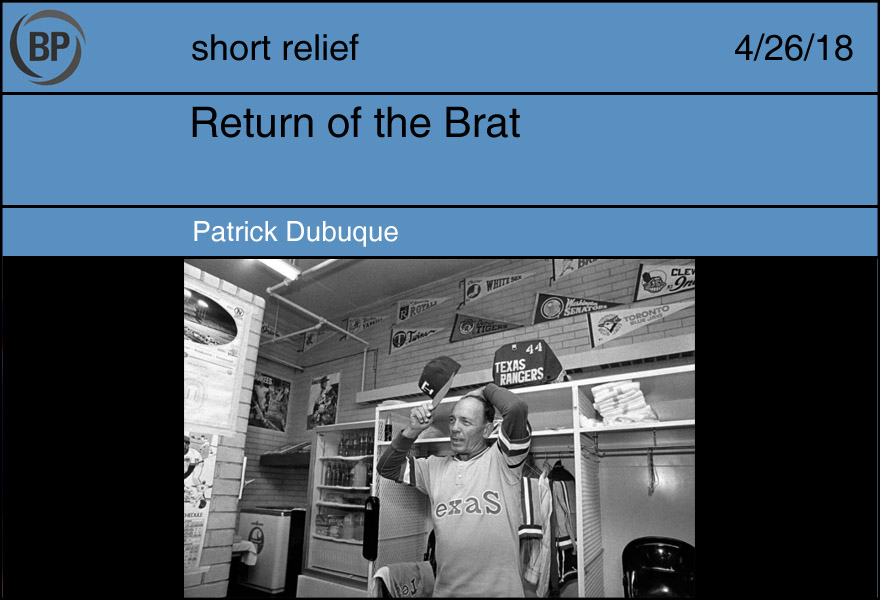 The fiery second baseman turned fiery manager had last led the Chicago White Sox in the late sixties. Even then the man called “The Brat” had been an anachronism: the platonic mid-century ideal of a baseball leader, piss and vinegar and swear words, a life at full boil. Before then he’d spent a different decade in waiting after the Cardinals let him go: managing minor league teams, scouting, instructing, gripping baseball by white knuckles. Now, in 1977, baseball had finally delivered him the perfect team: the Texas Rangers, a talented, leaderless band of malcontents. The former manager had not only been fired, but beaten bloody by his own second baseman. Toughness was in order.

Stanky’s exile had been complete; he’d taken over the University of Southern Alabama, where he’d inherited, in his own words, “a rock pile for a ball field, with no dugouts, a four-foot-high fence around it and no grass in the infield.” The team went 488-193 with him at the helm.

The locker room at the Metrodome, where he joined the Rangers on the road, would be hard to tolerate by today’s standards; one can imagine all the off-whites and grays coalescing. But compared to his former job, it must have felt like a dream. After all, this was it, the single unified purpose of every kid to ever wear a glove or hold a bat: to be in the major leagues, to wear the uniform. To feel that again after so long, to feel the vindication of waiting. To be able to be a boy again.

The Rangers won that night, 10-8. The team went back to their hotel, temporarily restrained. Except for Stanky, who called his new boss from a pay phone and quit.

He told him that he missed his family. But I believe the rest of the truth was that Stanky could no longer be a boy; the university had changed him. He’d begun the same angry manager he’d always been, but soon he was inclusive, kind, parental. He rostered as many players as he could get, rotated them all when he could – thirty-eight in one nine-inning game, against Vanderbilt. He went back to the school and coached there until his retirement, happy and beloved.

Still, it’s hard to imagine that phone call, the terror and the audacity of it. Knowing that this was it, that there would never be any going back. He’d be the man who quit after one game, and would never in his life get another. And he still did it, because he knew it was the right decision. He’d waited nine years, and after that, nine hours were enough. 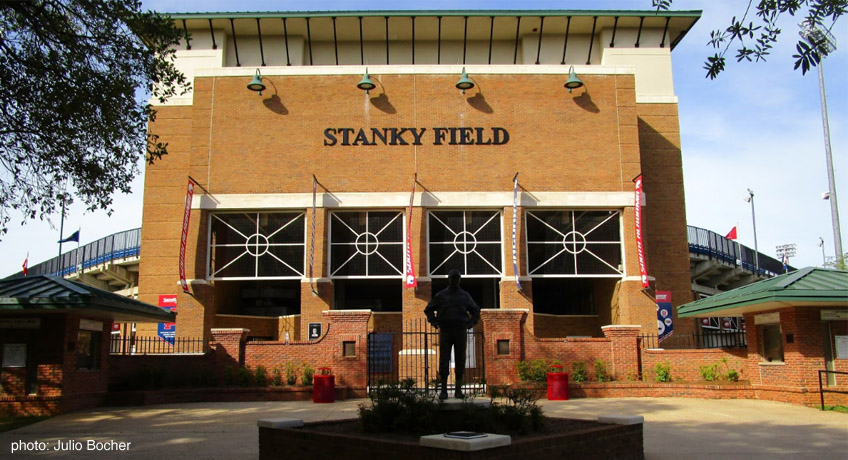 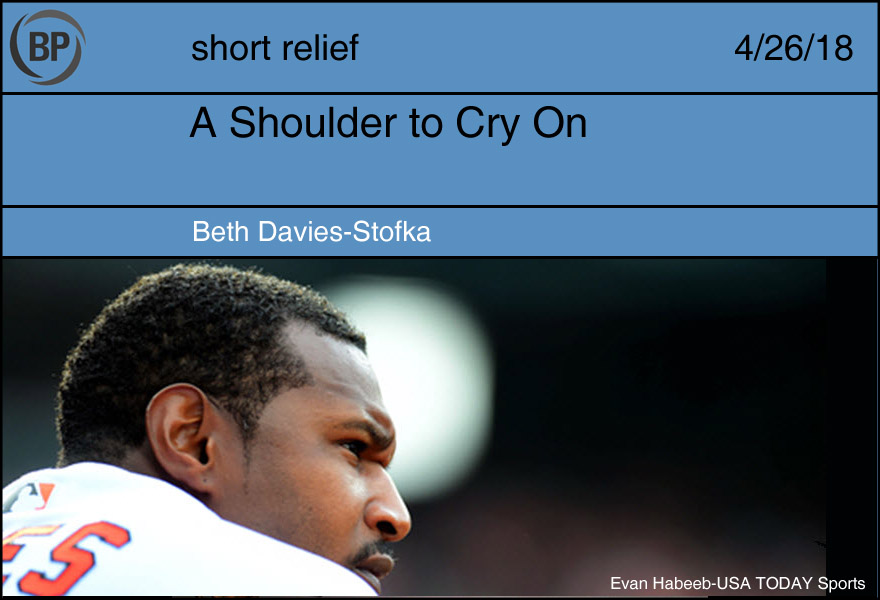 Several years ago, I decided to get an extra job and give my entire take-home pay to charity. That may sound like an odd thing to do, but it was my chosen act of devotion. I’ve funded wells for remote villages in Uganda and Haiti. I’ve helped support safe houses in American cities for people rescued from commercial sex trafficking. The things I’ve been able to do amount to a tiny drop in an enormous bucket of need, but I don’t have to wonder what I’ve done with my life. It’s counted for something, and I get comfort from that.

But helping where you are needed is a response, not a cure. The pain in this world makes me sad. When I heard the details of Freddie Gray’s death, my thoughts ran straight to him. I thought about being shackled in a police van, feeling my spine break, and then break again, and thinking, “No one is coming to help me.” It broke my heart.

Around the same time, I heard from a contact in Haiti. A network of clinics in the northern mountains was providing treatment to malnourished children, but the donor agency had tied the donation to the treatment of “acute malnourishment.” This caused a problem. As soon as the children were well enough to be considered “chronically” malnourished, the clinics had to stop treating them. They had to send them home. The children were back just as soon as they were acutely malnourished again. Sick kids were caught in a revolving door.

I had saved enough money to give the clinics some discretionary funds. The problem was far too big for me to solve, but at least I could help. I also went in person to witness the clinics in action. That was stressful. I was finishing a semester while planning the trip; packing, grading, picking up medications and soaking everything in DEET. Getting shots. It was a lot to do.

Nevertheless, on April 29, 2015, I put all thoughts of Haiti aside and sat down to watch the White Sox play the Orioles in Baltimore. The anger and despair over the death of Freddie Gray had moved to the streets, and the Orioles had closed Camden Yards to the public. A game played in an empty park was a game I had to stop and watch. I glued myself to it. I saw and heard everything.

To this day, I can see Adam Jones standing in front of a reporter’s microphone, explaining his thoughts on playing baseball in the midst of a city in pieces. “They need a shoulder to cry on,” he said, “and we need to give it to them.”

That’s when I understood what I had been doing. I couldn’t fix poverty, disease, and trafficking, but I could give a few people a shoulder to cry on. And I realized that I needed one too. So that afternoon, in my mind, I put my head on Jones’s shoulder and I wept.

You need to be logged in to comment. Login or Subscribe
Kyle Farrar
Exceptional, all.
Reply to Kyle
David Bowers
A Shoulder to Cry On is exceptional. You're on point with the moods and broken hearts of many.
Reply to David
John Collins
I enjoyed all these pieces. Let me advance a small correction about the Stanky piece, though. The Metrodome did not yet exist when Stanky had his one day as Texas manager.
Reply to John