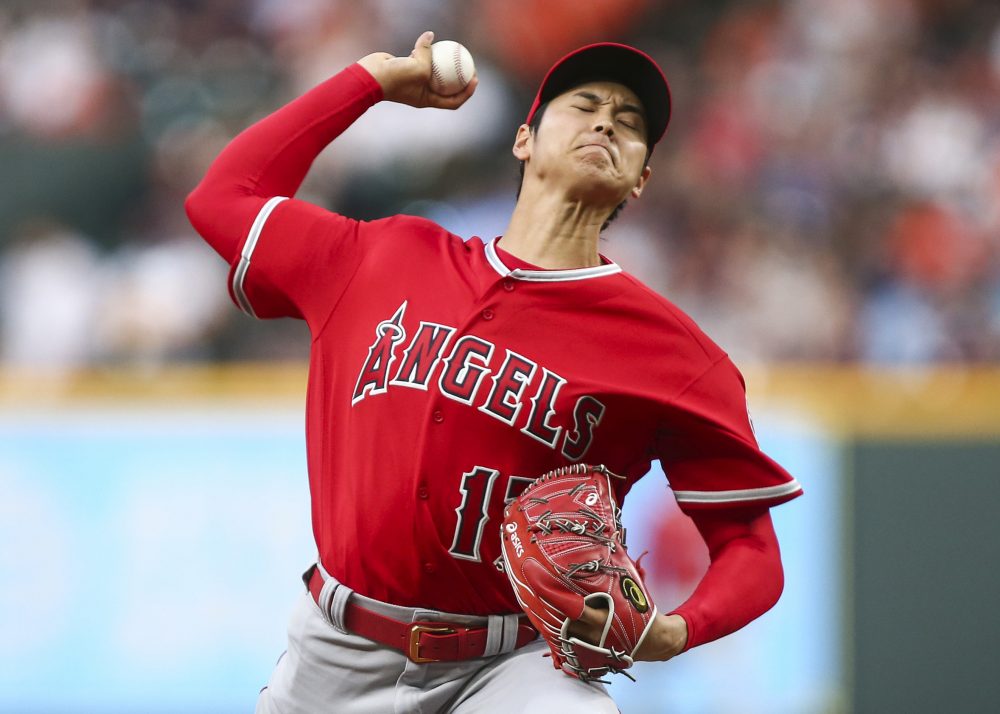 We’ve seen Shohei Ohtani at his best and Ohtani at his blister-induced worst. Tuesday we got the all-eyes-on-him duel-threat phenom at his somewhere-in-between in his fourth start of the season against the defending champ Houston Astros.

Ohtani showed no ill signs of the blister that ended his last start in his 5 ⅓ innings of work, flashing his best velocity of the season (topping out at 101 and averaging 98 with his fastball, according to Statcast), and a mostly sharp splitter in striking out seven Astros hitters.

It wasn’t all sunshine and flowers, however, as he also walked five (after just four in his first 15 innings of the season), and allowed four earned runs, including this moonshot from Derek Fisher.

He’s gonna get some reps against some random rookie tonight. https://t.co/FKbagjTCef

Ohtani and Charlie Morton, off to an inexplicable hot start entering the night, wound up non-factors in a game that featured a boatload of offense. Mike Trout hit his league-leading 10th dinger and even old men Brian McCann and Albert Pujols (2,993 career hits now) got into the act. But it was Andrelton Simmons, returning from a bruised forearm, who ultimately stole the show with a two-homer night, the last of which proved to be the game-winner.

Tuesday’s Roundup
Josh Tomlin has always fascinated me. There shouldn’t be anything particularly interesting about a 33-year-old mid-rotation guy with a 4.69 career ERA on a pretty good team. But Tomlin has now allowed 150 home runs against just 125 walks in 840 career innings.

It turns out, Tomlin is the first of his kind. No pitcher who has tossed as many innings as he has ever finished their career with more homers allowed than walks. Moving the sample back a bit, no pitcher with even 500 career innings has done it, either.

Why do you need to know this? Well, Tomlin didn’t hold back on Tuesday.

It was a night of returns in Kansas City as Salvador Perez returned to the Royals’ lineup after missing the start of the season because of tripping over some luggage and Lorenzo Cain, who returned to his original organization, Milwaukee, during the offseason, returned to the place he returned from as the Brewers and Royals kicked off a four-game series. Got all that?

The Yankees are starting to look more like the offensive juggernaut we expected them to be, this time bashing the previously lights-out Jose Berrios in a 8-3 win over the Twins.

Berrios still struck out seven in just four innings of work, but walked two after issuing just one walk in his first 27 ⅔ innings of the season, and allowed five earned run, although three of those came off the bat of Didi Gregorius, who is basically a human cheat code at this point.

Didi Gregorius is 1st shortstop in MLB history with at least 8 HR and 27 RBI in team's 1st 22 games.

JA Happ was well on his way to sending the previously unbeatable Red Sox to their fourth straight defeat, but then Roberto Osuna had to go and ruin everything, giving up four straight singles and a walk before allowing Brock Holt to tie the game.

The Red Sox did lose their fourth straight, though, because Curtis Granderson decided it was time for Craig Kimbrel to have an ERA above 0.00.

Making your MLB debut is a simultaneously exciting and nerve-wracking experience. I mean, I imagine it would be, at least. I haven’t made my major league debut (yet). Eric Lauer has, though. In fact, he did so on Tuesday. Against the Rockies. At Coors Field.

Eric Lauer is the seventh starting pitcher to make his MLB debut as a visitor in Coors Field. Cumulative stats: 29 innings, 28 runs.

Lauer achieved what was undoubtedly a lifelong dream. After years of hard work, early morning training sessions, riding busses from city to city, he finally made it. He even recorded his first big league hit!

And then what happened?

It’s time to check in on Matt Harvey.

Despite the continued struggles of the fallen hero of Gotham, the Mets keep winning, with Yoenis Cespedes saving the day before Jay Bruce won it.

Defensive play of the day
The Nationals continue to scuffle, losing 4-3 to the Giants on Tuesday. But it was no fault of Michael Taylor’s, who provided Washington’s only offense with a three-run homer, and also did this.

What to watch for Wednesday

Source confirms Acuna has been informed he's being called up for the Braves. The plan is for him to join the team tomorrow.