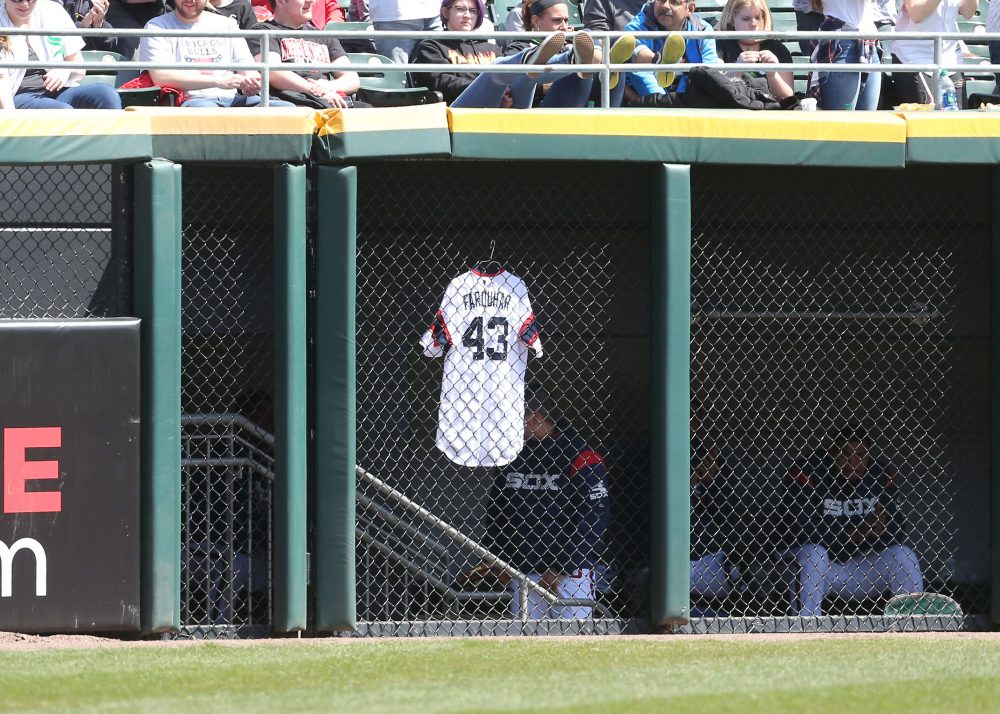 Life is fleeting and it can change in a moment. One minute you’re walking off the field after pitching two-thirds of an inning in a game against the Houston Astros and the next you’re fighting for your life after being rushed to the hospital, stricken by a brain hemorrhage from a ruptured aneurysm.

On Friday night, the Chicago White Sox lost 10-0 to the Houston Astros, but the game didn’t matter because their teammate, Danny Farquhar, could have died.

Farquhar walked off the field after he threw his 15 pitches, stepped down into the dugout, started vomiting and then collapsed. He was carried out of the dugout and into the clubhouse by a few guys before they had time to get a stretcher to him. Farquhar was taken to the hospital by ambulance before his wife and mother, who were at the game, even got to see him.

White Sox medical staff and emergency medical personnel took care of him in the dugout and in the clubhouse before he was taken to the hospital. Farquhar was lucky. If the ruptured aneurysm had happened somewhere else, who knows if he would have survived.

The 31-year-old is in the neurosurgical intensive care unit at Rush University Medical Center in Chicago and is recovering from a procedure on Saturday that White Sox Vice President Kenny Williams said required doctors to crack open Farquhar’s skull and put a clamp on it. It was done to relieve swelling on Farquhar’s brain. Williams told reporters, “He’s a fighter, and he’s in the fight of his life right now.’’

Former teammates and other players from around the league have sent well wishes to Farquhar and his family. His White Sox teammates hung his jersey in the bullpen during both Saturday and Sunday’s games against the Astros and some wrote “D.F. 43” on their hats.

Farquhar is in critical but stable condition and is expected to be hospitalized for the next few weeks. The White Sox aren’t releasing any more information at the request of Farquhar’s family.

Farquhar has played seven seasons in the Majors and is 10-15 with a 3.93 ERA in 253 career relief appearances with Toronto, Seattle, Tampa Bay and Chicago. He has been with Chicago since July 2017. He signed with the White Sox as a free agent after Tampa released him earlier that same month.

Baseball had its first no-hitter of the 2018 season on Saturday night and the best part about it is that it happened to be thrown against the hottest team in the league.

Oakland A’s lefty Sean Manaea held the red-hot Boston Red Sox hitless over nine innings with 10 strikeouts. He walked two batters. One of those walks was Andrew Benintendi in the top of the ninth which brought up the always dangerous Hanley Ramirez to the plate but Manaea induced a ground ball to short and got the force at second to preserve the no-hitter.

Heading into Saturday, the Red Sox had won eight straight games and had the best record in baseball so shutting them down was no easy feat.

Of course, there was some controversy. Isn’t there always something during a no-hitters? There was a play in the sixth inning that involved Benintendi who clearly ran out of the baseline while trying to get to first. At first, he was called safe but the call was overturned. This caused a bit of a hullabaloo but the rulebook states:

“Rule 5.09(b)(1): Any runner is out when he runs more than three feet away from his base path to avoid being tagged unless his action is to avoid interference with a fielder fielding a batted ball. A runner’s base path is established when the tag attempt occurs and is a straight line from the runner to the base he is attempting to reach safely.”

The umps happened to be right this time and if you know anyone who wants to dismiss or diminish Manaea’s no-hitter because of that play, show them that rule and then tell them to be quiet.

It was the 297th no hitter in baseball history and the first in Oakland since Dallas Braden’s no-no in 2010. It was also the third no-hitter on April 21. Phil Humber of the White Sox did it on April 21, 2012 against the Mariners and Jake Arrieta of the Cubs did it in 2016 against the Reds.

Another fun thing about baseball? Walk-offs! And on Saturday, there were two very different walk-offs in the National League.

In Milwaukee, the Brewers were tied 5-5 with the Marlins in the bottom of the ninth—they scored the tying run in the eighth inning thanks to an Eric Sogard double. Righty “super sub” Jesus Aguilar stepped into the box against Marlins reliever Junichi Tazawa to lead off the inning and it turned into an epic battle. It took 13 pitches but Aguilar finally connected on a 92 mph 3-2 pitch that got way too much of the plate and sent it to deep right-center field.

After a walk to Dansby Swanson, a ball hit to the right side of the infield by Johan Camargo that looked like it would be a routine base hit became that scored Swanson to tie the game. The Braves pinch hit Kurt Suzuki who hit a single but he hit it right at Todd Frazier who knocked it down which prevented Camargo from scoring from third. Then they pinch hit Charlie Culberson for some reason. He was hitting .130 coming into the at-bat and he looked like it as he feebly struck out. Then the fifth batter of the inning, Ender Inciarte, surprised everyone with a drag bunt to the right side to win the game.

Sunday’s matchup between the Mets and Braves was rained out but they’ll play a doubleheader on May 28.

On Sunday afternoon, the Yankees’ top prospect Gleyber Torres made his major league debut but it was overshadowed by the other highly touted rookie, third baseman Miguel Andujar. Torres was a little anxious and you could tell in his first at-bat but that’s to be expected. Torres’ at-bats improved as the day went on but he had nothing to show for it. He finished the game 0-4. Meanwhile Andujar, who has been hot this past week or so, continued his torrid pace and finished 4-4 with two doubles. He’s 13-for-25 with seven doubles, a triple and two home runs in his past six games.

As for Torres, he’ll be fine. The Yankees won three out of four against Toronto and they didn’t call him up to be the savior so he can take his time getting adjusted to the big leagues.

Manny Machado was doing Manny Machado things against Corey Kluber on Sunday afternoon. He crushed two solo shots against the Klubot—in the first and fourth inning.

As for Machado, he’s batting .356 with eight home runs and 17 RBIs so far this season. Nice start.

So I turned on the Giants/Angels game because Shohei Ohtani was slated to bat clean up for the Angels and if you read this column regularly you know how much I love Ohtani. But before the Angels could come to bat, their starter, Jaime Barria, had a bit of a rough time getting out of the first inning. In fact, Giants’ number two hitter Brandon Belt made it really difficult for the youngster. He made Barria throw 21 pitches. That’s not a typo.

It set a new record for most pitches in an at-bat (they started keeping track of that stuff in 1988) and the at-bat itself lasted 12 minutes and 45 seconds.

Here is the breakdown of those 21 pitches:

So Barria ultimately won the at-bat but he needed 49 pitches to get out of a bases loaded jam in the first inning. Barria only lasted two innings, threw 77 pitches overall and picked up the loss, the Giants won, 4-2.

Defensive play(s) of the weekend

Albert Almora Jr. is a little ridiculous. He had himself quite a day on Sunday at Coors Field.

My shoulder hurts after that last catch and collision with the wall.

It’s a normal Monday night slate with only nine games. In New York, Jake Odorizzi will make his first start as a Twin in Yankee Stadium against Masahiro Tanaka who looks to rebound from his awful start against the Marlins on April 17. (7:00 p.m. ET)

Oakland travels to Texas this week and Trevor Cahill is matched up against Matt Moore. (8:05 p.m. ET)

Miami is making its first trip of 2018 to Dodger Stadium and it should be a fun one. Jarlin “the Marlin” Garcia who has started the season only yielding two runs in 21 innings pitched will be facing Dodger prospect Walker Buehler who is making his first major league start. (10:10 p.m. EST)