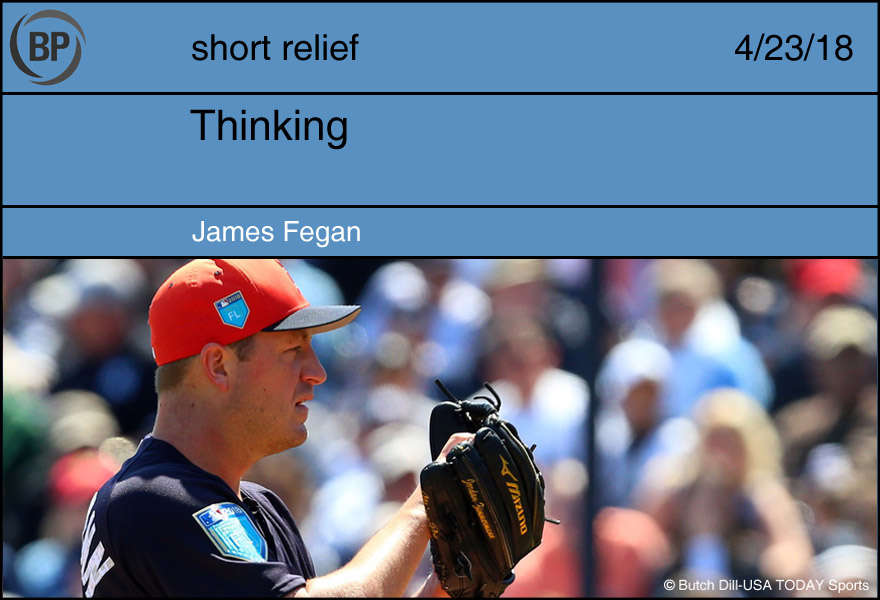 Imagine a box. A rectangular space. It has windows, big triple-pane ones, with a nice view. You are not trapped here, or even locked in this box, but you are definitely expected to be there. Everyday.

Once inside, a phrase is heard aloud in a declarative, confident tone.

“This pitcher thinks too much.”

At face value this is easily dismissed. You’re pretty sure that the delivery that looks like a botched yoga movement is the real reason this man can’t throw strikes in a major league game, and you’re pretty sure the stringer, who is watching a golf tournament on a small television in front of him, would not know this. But now the statement is in the air, you’re considering it.

“He thinks too much.”

Some players do think too much, though. It’s a real thing that you’ve heard many times before. Wait, when did you first hear it, though? Think back on that.

“I’ve also heard he thinks too much.”

This is from a more trusted voice. A grizzled reporter who has been on the beat for decades. The collective wisdom of thousands of games in the clubhouse courses through his veins, he’s seen it all, heard it all, felt it a–

You do just have to pitch. More pitchers should just pitch, rather than think, like this guy is thinking, which many have pointed out is too much thinking.

“You can see him thinking out there”

You can. His brain is in his head and you can see his head, sitting on his shoulders, thinking away. It’s clearly too much. Everyone in the box says so. You’re still in the box. How long has it been?

“Are you thinking too much?” you ask him after his start. Almost on cue, he thought about it, in a clear admission of guilt.

“Too much?” he responded, still thinking, clearly. “I’ve been focusing on my mechanics,”

Focus is another term for thinking, which this fiend apparently can’t get enough of.

Over the course of a day, or days, maybe weeks? How long have you been here? Your diagnosis of mechanical issues has been switched to a clear case of overthinking, due to a preponderance of sources. Voices wafting into your head, poisoning your thoughts, planting seed of doubts, and infecting you with the same plague of overthinking oh god you’re doing it now you’ve always been doing it and now you’re one of them. 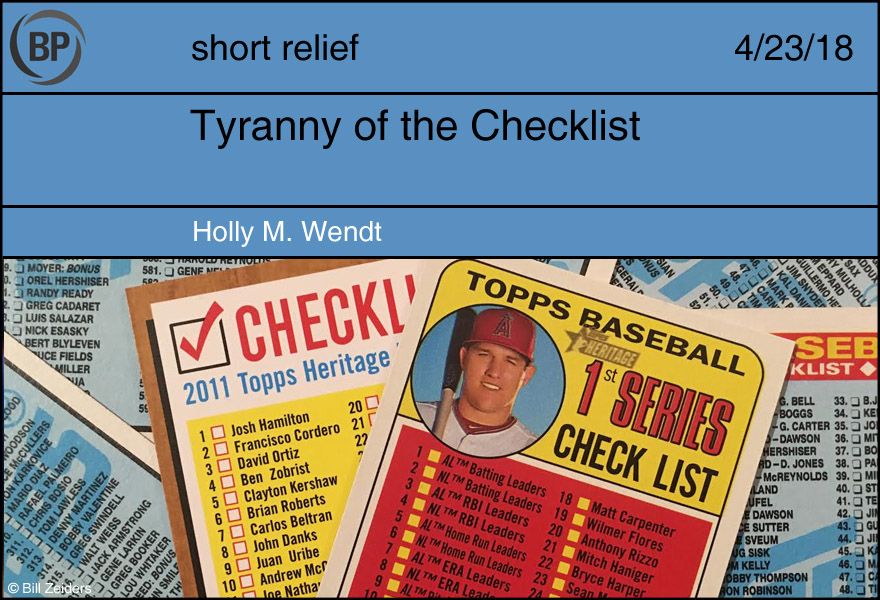 I know I’m not alone in lamenting my to-do list, especially as this particular month heads toward its end. I say especially because the many students spread across the four classes and two independent studies and one honors project I’m responsible for are in the same boat. For my classes and all their others, students will write and examine and present and defend. As they complete each piece of their work, mine increases; the to-do list lengthens. This is not a complaint; this is simply a semester’s end in academe, predictable in its many uncertainties of hard drive crashes, illnesses, scheduled and rescheduled athletic contests, and the knowledge that playoffs and conference tournaments will begin the same week as finals. There are surprises, but I know their size and shape. We find ways to manage, try not to think about how, when one list is done, another will run its long lines on a tablet or calendar or simply in the fraught, anxious mind.

When they’re not surprise disasters, though—like the year’s third strep throat diagnosis—I quite like surprises, the novelty of encountering a new thing. It’s why I love travel and good restaurants and the beginning of baseball season, when no one really knows how anything will go. It’s also why I enjoy opening packs of baseball cards, even though I’m not much of a collector, of baseball cards or anything else. But the seconds between taking up the foil packet and tugging it open, splaying the hand to see what’s been dealt—those are a delight. Recently, too, my spouse bought a whole box of the new Topps Heritage cards, eight packs of neat, nostalgic rectangles I was invited to participate in opening.

In the absence of any of the traditional markers of baseball card value—things rare and thus saleable, like the signed Shohei Otani cards inserted into that set—we did find cards that we valued in other ways. How can you feel any way but glad to see Ichiro, Jorge Alfaro, Jose Altuve?

The delight of surprise evaporated. I put down the little catalogue of lack, the to-do list of items not yet purchased, its little reminder of everything not yet complete. Maybe somewhere someone will dent the glossy cardboard with ballpoint or slick the boxes black with Sharpie—done and done and done—and take pleasure in it, but it won’t be me.