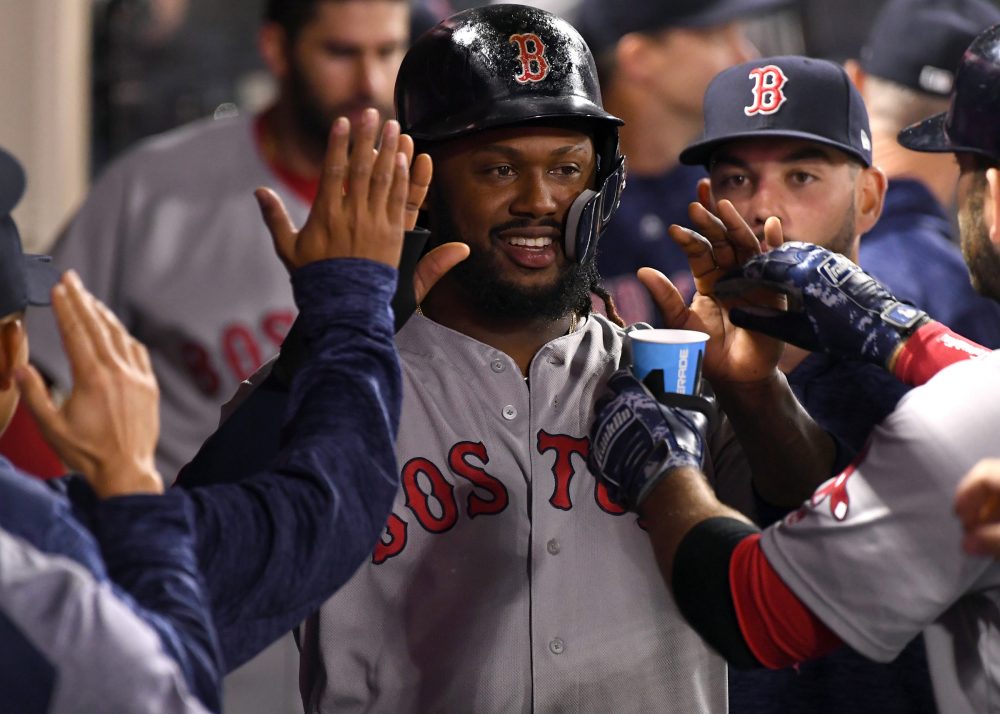 Last week, I implored you all to take time to watch the Angels whenever you could. However, if you’ve been tuning in to the Angels this week then you’ve been seeing the Angels and their exciting brand of baseball get upstaged by the red-hot Red Sox. Boston has been going through its competition like a buzzsaw, and things were no different Wednesday as the Red Sox completed a three-game sweep of the Halos.

One of the main reasons why the Red Sox have gotten off to this great start is that their offense has come to life in a big way. The team’s power spent most of 2017 in hibernation, but here in 2018, the Red Sox are wide awake and they are crushing everything in sight. Going into Thursday night, Boston had an Isolated Power number of .199, which was good enough for the best in all of baseball, and also eight points clear of the presumptive power-hitting favorites in the Bronx.

Mookie Betts wasted no time reminding everybody of that fact by going deep on the third pitch of the entire game.

The Angels tied it up in the second inning, but the Red Sox improved their ISO number in the fourth when they reclaimed the lead thanks to a looping hit from J.D. Martinez that made it over Justin Upton’s head and brought in Hanley Ramirez to break the tie.

Martinez added another double in the eighth, as the Red Sox were pouring on insurance runs. Before that happened, there was another surge of power from the Red Sox and it came from the bat of Andrew Benintendi. He caught one high and inside the zone from Nick Tropeano and sent it high above the yellow line in right field to make it 4-2 Boston at that point.

Andrew Benintendi belts a solo homer to right, his first of the season, extending the Red Sox’ lead to 4-2 in the 6th inning (00:53)

The Red Sox won 8-2 to complete the sweep with an aggregate score of 27-3 over three games. They had seven extra-base hits in the finale, including five doubles and two home runs. If the Yankees are known as the Bronx Bombers, then we may need to start referring to the Red Sox as the Beantown Boppers because they are absolutely raking right now.

Speaking of the Bronx Bombers, they picked up a 4-3 victory over the Blue Jays, and Aaron Judge lived up to the team’s nickname by launching an utterly majestic shot into the left-field seats.

While Giancarlo Stanton didn’t exactly contribute to the power-hitting parade, he did show that he isn’t letting his struggles at the plate affect his hustle as he legged out an infield single to help keep a rally going in the fifth.

With two outs in the bottom of the 5th inning, Giancarlo Stanton legs out an infield single (00:54)

Is that enough to “earn his pinstripes?”

Let’s just say that things went way better for Philadelphia this time around. That’s because they won 7-0, with Jake Arrieta leading the way with an excellent outing. He went seven innings, struck out 10, only walked two and gave up only one hit after 97 pitches. This was a vintage performance from Arrieta while wearing vintage uniforms as well.

Jake Arrieta fans Gregory Polanco swinging to strike out the side in the top of the 3rd inning (00:21)

Speaking of NL East pitchers who did excellent work over seven innings, I’d imagine that you didn’t have Matt Wisler on that list going into last night’s action. After he made 26 starts in 2016, Wisler spent the vast majority of 2017 in Triple-A and only made one start at the big-league level and it didn’t go well for him.

While his 2017 major-league experience was mostly forgettable, the Braves had faith in him and he’s off to a firing start in 2018. He was only pushed into starting duty after Anibal Sanchez suffered a freak injury during practice, and Wisler made the most out of his opportunity. He went for seven innings and collected eight strikeouts while only giving up two hits, one of which was a home run. Other than that, it was a great performance from Wisler as the Braves walloped the Mets to the tune of 12-4.

The Phillies weren’t the only team who broke out the throwback uniforms here on “Throwback Thursday.” The Diamondbacks have gone through their fair share of uniforms since joining the National League in 1998 and that was the year that they went back to with their uniforms on Thursday night — right down to the cream hats!

The ‘98 Diamondbacks didn’t win too many games, so a performance like the one they had last night would have been a sight for sore eyes. Despite falling behind in the second inning, the Diamondbacks tied it and later rode a go-ahead homer from A.J. Pollock, along with an insurance dinger from Ketel Marte, to a 3-1 victory.

After Zack Greinke threw seven innings, with that lone run in the second being the only major blemish on what was a lovely evening on the mound, Archie Bradley picked up where he left off against the Giants by throwing another scoreless outing — this time, striking out the side in the process.

The Astros made easy work of the Mariners on Thursday afternoon but they had a pretty major bump in the road in the process. With the game still scoreless in the top of the fourth inning, Evan Gattis sent a grounder from a check swing directly to Kyle Seager at third, who stepped on the bag for the first out and tossed it to Robinson Cano for out No. 2. For some reason, Gattis thought that that was the end of the inning and started running back to the dugout. He ended up being out No. 3.

If there is a stranger triple play turned than that one, then I absolutely cannot wait to see it and we are going to be in for a treat. Until then, this is officially the clubhouse leader for “strangest triple play” of the year.

This is an easy one. If you’re on the East Coast then you’ll have to stay up late to see the Nationals and Dodgers (10:10 p.m. ET) but I’d imagine that a pitching matchup between Max Scherzer and Clayton Kershaw is absolutely worth bundling up on the couch with a cup of coffee in order to watch. Over Scherzer’s past two starts, he’s thrown 16 innings and struck out 21 batters, while only giving up one walk, three hits and two runs.

Meanwhile, Kershaw has thrown 14 innings over his past two starts and has collected 18 strikeouts, giving up eight hits and two runs while managing to avoid giving out a single free pass. Simply put, both of these guys are currently locked in and are already in mid-season form. If you want to see about as high-quality of a pitcher’s duel as you will get, then you definitely need to tune in for this one.