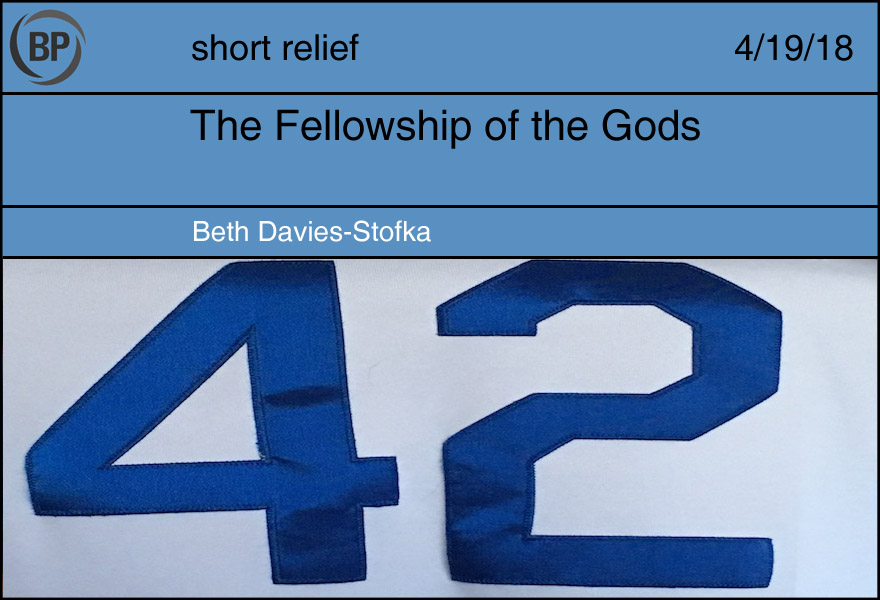 One day, the young god Obatala looked down from the sky and said, “The situation in the ballparks needs improvement! I must talk with Olorun and see what can be done.”

He said to Olorun, “Poor Happy rules nothing but Joes and Bobs! What he needs are Bucks and Robertos, Roys and Dons. Everyone could play together, sharing sunshine and having fun.”

Olorun replied, “Of course! The people should have fun together. But who can create the right conditions? And how?”

“With your permission,” Obatala replied, “I will bring the players together in fellowship and trust.”

“It is always my pleasure to give you whatever you wish,” Olorun replied. “You know that I love you as my son!” So Obatala went to the house of Orunmila, the oldest son of Olorun, who had the gift of prophecy. Orunmila understood the secrets of existence, including fate and the future. Obatala said to Orunmila, “Your father has given me permission to integrate baseball. With your superior knowledge, you can teach me how to begin my project.”

Orunmila replied, “First, you must acquire a golden chain long enough to reach your ballparks below. Then you must fill a scout’s briefcase with notes and a camera. Finally, you must place your scout in a bag along with a bulldog, an owner, and a sports writer, and take them with you. That is how I advise you to begin your project.”

“Thank you, Orunmila,” Obatala replied. “I will begin at once.” The gods were sympathetic to Obatala’s cause and gave him all their gold, and soon Obatala had climbed down to earth on a golden chain. From his bag, he took the owner and placed him in Brooklyn. He placed the scout in California, the bulldog in a clubhouse, and the writer on a train. Then he walked with pleasure upon green fields from coast to coast while watching a new world take form.

Not everyone, however, was pleased with Obatala’s idea. He had not consulted the powerful men who regarded the ballparks as their special domain. These men unleashed waves of opposition.

Obatala did not know how to deal with this, so he asked Orunmila for advice. Orunmila replied, “You rest here in the sky and I will go. I can remain calm, and in that way I will calm the waves.” So it came to pass that Orunmila came to Brooklyn. Using his special knowledge, he caused the opposition to abate.

The people greeted him as their hero. He agreed to stay and teach them the ways of dignity and purpose. Then he returned to his home in the sky. But first, he gave the people a number—42—to help them remember the lessons he taught.

Once each year, Orunmila and Obatala climb down the golden chain for a visit. The people celebrate with stories and games. In this way, there is fellowship with the sky gods and the people they love. 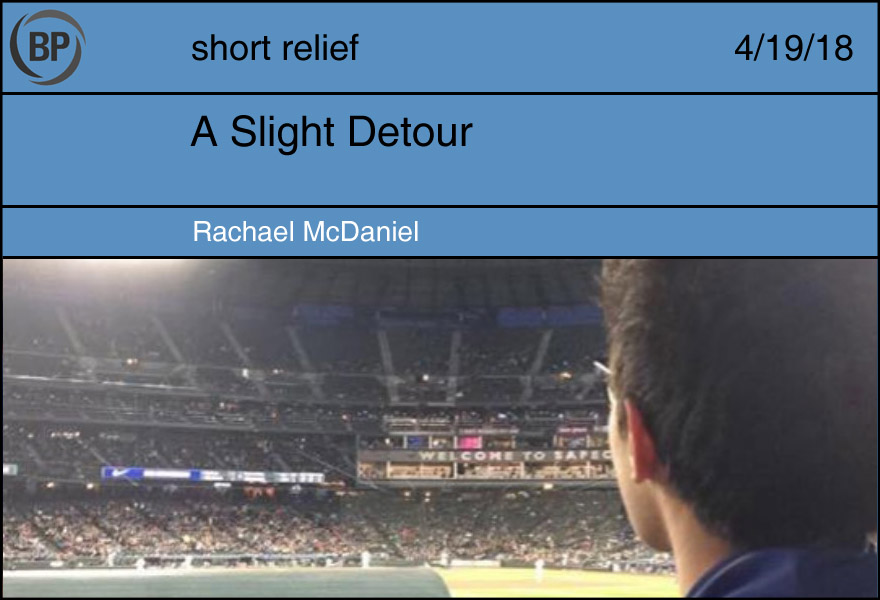 My girlfriend and I took a trip to Olympia over the weekend to see our favorite band. Olympia is around 200 miles south of where we live in Vancouver, and neither of us drive. Our transportation was thus left to the whims of Greyhound buses. Other than the 5:10 am boarding time, our trip south on Saturday morning went as smoothly as it reasonably could have; our trip north, however, was not so.

Exhausted after two days that had seen us take a nine-hour bus journey, go to a four-hour rock show and take a five-hour nature hike, we were in desperate need of a rest. Our northbound bus was scheduled to leave Olympia at 2:55 pm for a 9 pm Vancouver arrival. In reality, we didn’t leave Olympia until 4:15. We were given no information on this delay other than that the bus was “late,” which we probably could have figured out by ourselves. The bus, which was supposed to go straight through to Vancouver, kicked us off when we got into Seattle at around 6:40. Our new Vancouver bus would be leaving at “10, maybe.”

We hauled our tired, bus-cramped bodies out of the station, figuring we could take the light rail downtown and find some food. Safeco is only blocks away from the Greyhound station, and if I hadn’t already known that the Mariners were playing, the steady stream of people in M’s hats walking past us would have tipped me off. The roof was closed — it was cold and rainy, as it had been all weekend — but I could still see the lights twinkling, the odd person walking up the stairs to their seats.

My girlfriend must have noticed me staring. It’s too bad we didn’t know we were going to be stuck here, they said. We could have gotten tickets.

I’ve never been able to just go to a baseball game. It’s always an event, a federal something that requires planning and effort and stress. This is true even when it comes to watching the low-A Canadians — their games often sell out fast — but especially with our annual Blue Jays Safeco pilgrimage. Saving up money, buying the tickets months in advance, getting transportation and passports and American currency in order. Waking up early, traveling for hours, looking for parking, dealing with the huge crowds that always show up when the Jays play in Seattle, making sure my brother doesn’t get swept away in the crush. I always have a good time, obviously. But it’s never a reprieve — it’s a source of stress, not an escape from it. I’ve never been able to go to a baseball game just because I wanted to, just because I felt like it.

You know, I said to my girlfriend as we stood there in the drizzle, we could just walk over and buy tickets. Like, right now. There won’t be a big crowd. I could show you all the cool stuff around the stadium, and the Astros are there. We could see Altuve. Big Maple is pitching — I’ve told you about him, he’s the Canadian guy, the eagle landed on him. I’ll take off my Jays hat. We could just — go to the game.

And as we walked around the quiet, chilly concourse, cheering whenever the Mariners made a good play or got a hit, chanting “EH” when Paxton got to two strikes and laughing, I felt something I’ve never felt at a baseball game before. I think it was relief. 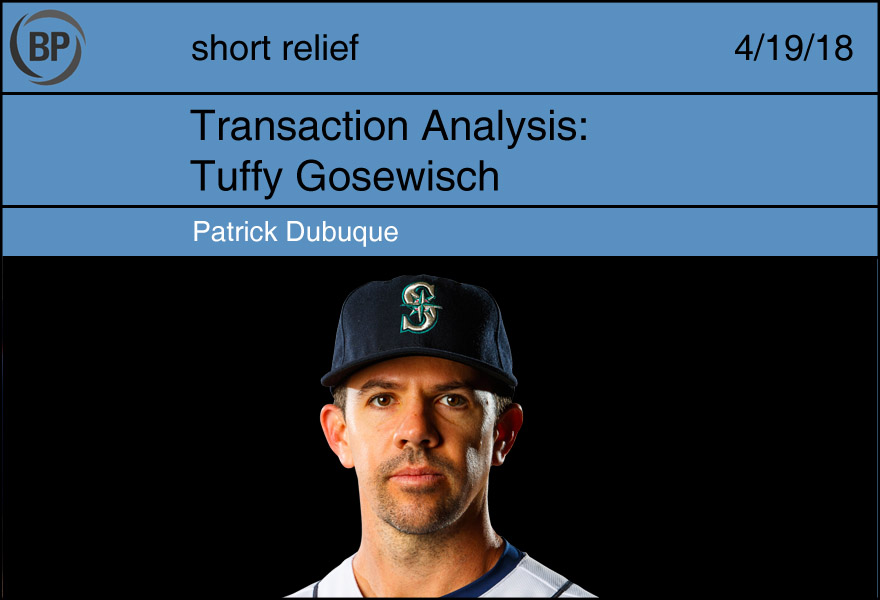 We lost track of Jesus for a couple decades, so it’s only natural to wonder what transpired in the life of Tuffy Gosewisch, catcher ordinaire, between his release from the Seattle Mariners on April 5 and his resurrection, a mere eight days later. His twitter account, as enigmatic as the man itself, has seen only two posts all year: one, a link to an article about his former high school baseball coach, and the other an announcement that he’d donate to Brendan Bishop’s charity based on his spring statistics. (Thanks to his .148/.179/.296 slash line, the total came to $110.)

Gosewisch reported to Triple-A Syracuse and resumed his Quad-A ways, smacking two doubles in his first five times at the plate. He’ll remain there until Matt Wieters gets injured, or the Nationals somehow claim David Freitas off waivers from the Mariners, the same man who drove him off that roster.

…I don’t know why I’m telling you this. I don’t know why it came to be that Tuffy Gosewisch, perhaps the kindest and least interesting member of baseball, has become my beat. I mean, I know why. During the trade deadline last season the BP writers got together to chip in and help Bryan Grosnick with the volume. There was a spreadsheet, and a column on that spreadsheet, and that column said “your beat.” It was meant to be which teams or positions one might consider themselves an expert, but I, being a smartass, listed a single player. A player that has, in the nine months since, moved three times.

In a way, Tuffy Gosewisch is like the hard sciences to me. I try to be a well-rounded individual, but even I have to accept that a certain amount of specialization is necessary, and the sciences were always my worst subject in school. I don’t reject science; I want it to be there, diligently studied by people who are not me, geniuses who can improve the world. But I am willing, in my liberal arts meandering through this existence, to accept certain aspects of biology and chemistry as unchecked fact. I’m happy to let the invisible cellular world churn through its cycles, and accept that the grocery store cheese dog somehow nourishes me.

And in baseball, those cells are Tuffy Gosewisch, circling through baseball’s circulatory system of Triple-A teams and September call-ups and eighth-inning defensive replacements. Even when you’re not looking, he’s still there, doing the things that Tuffy Gosewisch is designed to do, always smiling. It’s easy to forget when your head’s in the clouds, but sometimes it’s good to get forced to look down, write about a replacement-level catcher, and be reminded of how life actually works.

You need to be logged in to comment. Login or Subscribe
Scott Pelarski
Rachael, the only thing I love more than baseball is music and I really want to know what band you went to see over the weekend.
Reply to Scott