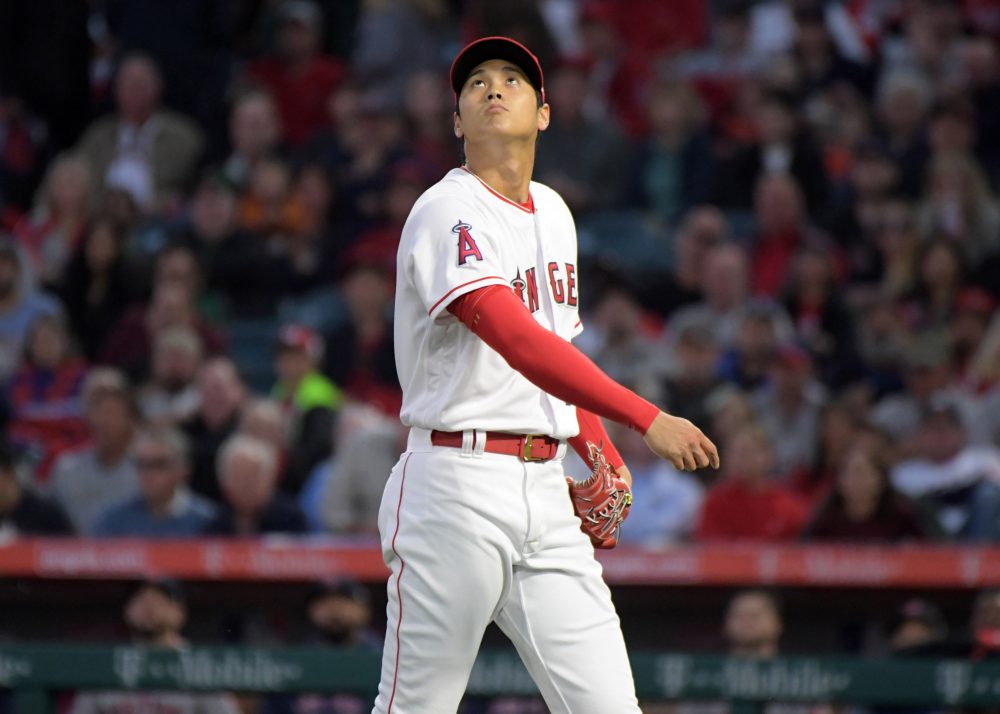 Shohei Ohtani faced his first real offense of the season (sorry, Athletics) on Tuesday night against the Red Sox, and the anticipation that was delayed two days by weather set up a showdown against David Price and a matchup between the two teams with the best records in the American League.

Whatever hype the game came in with dissipated quickly. Mookie Betts lifted Ohtani’s seventh offering of the game over the wall and things only got worse from there.

The pitch Betts took out wasn’t actually bad — a fastball down in the zone that grabbed juuuust a bit too much of the plate — but the 23-year-old wunderkind struggled with his command for the entirety of his evening. After inducing 26 whiffs with his splitter through his first two outings, according to Brooks Baseball the Red Sox hitters swung and missed just three times against him Tuesday (none on splitters) and he threw just 34 of his 66 pitches for strikes.

Maybe there was a reason…

Shohei Ohtani developed a blister on his pitching hand in the 2nd inning, the #Angels say.

When it was all said and done, Ohtani allowed three earned runs, walked one, and struck out just one in two innings of work. I guess he’s human after all.

The other side of that game

We’re not yet to the point of the season where anything Ohtani does — good or bad — isn’t noteworthy, so apologies to the Red Sox and particularly, Betts, whose first-inning blast off Ohtani was one of THREE in a 10-1 shellacking.

Betts added two walks, raising his OPS to 1.289, and is playing very much like the guy who finished second in AL MVP voting two years ago. That’s good news for Boston. Even better news? The temperature is supposed to get above 50 on Wednesday!

Patrick Corbin was pretty definitively the Diamondbacks’ fifth-best starting pitcher last season, and they still won a surprising 93 games behind the dominant trio of Zack Greinke, Robbie Ray, and Zack Godley. Imagine if Corbin suddenly starts pitching like an ace.

The 28-year-old lefty took a no-hitter into the eighth inning and finished one pitch shy of a “Maddux,” shutting out the Giants in a complete-game effort, striking out eight, walking one and allowing just one hit. He’s now tossed 27 1/3 innings this season and struck out 37 against just five walks with a 1.65 ERA.

Oh, that one hit?

It turns out that infield shifts are actually bad. Who knew?

Seven months after Hurricane Maria ravaged Puerto Rico, and with the island still dealing with the effects of the tragedy, the Indians and Twins played a game in front of a raucous crowd and their countryman, Francisco Lindor, delivered.

American baseball fans were introduced to the Puerto Ricans’ enthusiasm for the sport during last year’s World Baseball Classic, and while the country is still a long way from recovering from a storm that claimed so many lives, their love for baseball hasn’t seemed to changed.

Now THOSE are some uniforms even Chris Sale might actually love. The White Sox and Athletics sported these 1968 throwbacks to celebrate the 50th anniversary of the A’s first season in Oakland. Even better? The game was free of charge to fans, leading to what looked and sounded like a playoff-type atmosphere between two otherwise bad teams in the middle of April.

Jarlin the Marlin Garcia’s first two starts of the season began with 10 1/3 no-hit frames between last week’s start against the Mets and Tuesday’s against the Yankees. In 11 innings as a starter he’s now allowed just one hit, but walked seven against five strikeouts.

That’s a pretty weird line. Even weirder is the fact that he got his first got the win Tuesday because the Marlins jumped all over Masahiro Tanaka for a 9-1 win.

Speaking of weird and/or surprising early-season pitching performance, Chad Bettis is now 3-0 after tossing 7 1/3 shutout innings for the Rockies in a 2-0 win over the Pirates. The two teams played through the snow, meaning we successfully went through a full day of baseball with zero postponements!

The Pirates and Rockies are attempting to play through heavy snow because Mother Nature hates baseball https://t.co/Qg7MMxrqSU pic.twitter.com/BLM387o68p

Bettis’ return to the mound, let alone his effectiveness, is impressive as he’s come back from a bout with testicular cancer. I don’t know if his good performance is going to continue — he has a 1.44 ERA through 20 innings despite a pedestrian 11 strikeouts against five walks — but hopefully his good health does.

With apologies to Steve Pearce, Dixon Machado, Tommy Pham, Niko Goodrum, Daniel Descalso, Johnny Field and others, only one took away a tying home run in the ninth inning:

Looking Ahead to Wednesday

The Red Sox and Angels will be Ohtani-less, but will nonetheless continue their series with Rick Porcello facing Tyler Skaggs. Gerrit Cole will look to extend his double-digit strikeout streak to four games against Mike Leake and the Mariners, and the Twins and Indians will continue their series in Puerto Rico with an exciting pitching matchup of Carlos Carrasco against countryman Jose Berrios.

You need to be logged in to comment. Login or Subscribe
alfresco
Minor quibble - Puerto Rico is not a country; it's a US territory.
Reply to alfresco
ofmontreal
Love the daily refresher! That ball Taylor caught definitely was not over the wall but if it gets Kenley’s mind straight then ok.
Reply to ofmontreal