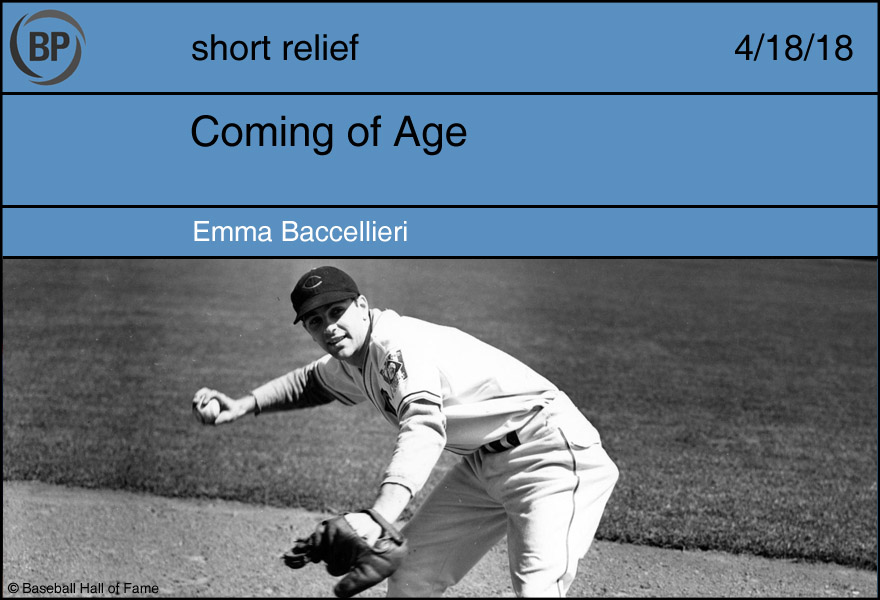 As a kid, I had no routine that I loved quite so much as that of my nightly bedtime story, and for quite a while, there was no source of that story that I loved quite so much as Indians Baseball: 100 Years of Memories. The book wasn’t meant to be used as a collection of bedtime stories for elementary schoolers; it wasn’t even mine. But therein lay the appeal—the team history belonged to my dad, a book with real grown-up facts instead of the usual made-up things about farm animals, with impressive glossy pages and an awful lot of photographs. There were a lot of stories in there, or at least a lot of information that my father could capably package into stories himself without me or my sister being any wiser to the actual written content, but one was a particular favorite: Lou Boudreau, player-manager.

This happened, my dad told us, so many years ago that my grandfather had been even younger then than we were now. (An impossibly long time back!) This was important, because age was a key part of the story, but it was the part that I couldn’t quite grasp. Boudreau had been 24 years old when he was hired as manager in 1942—and this was supposedly young, very young, so young as to be the whole point of the story. Yet that seemed fundamentally wrong to me, because 24 was old. That was an age for adults, part of the great hazy wash of authority that seemed equally the right of any person who was old enough to have finished high school. A grown-up was a grown-up was a grown-up, one great singular category with freedoms beyond my reach, my parents and teachers and neighbors all thrown in there together. The idea that a 24-year-old could be young—so young that everyone in the story was worried about his youth, the team owner and the other players and even Boudreau himself—did not compute. All baseball players were equally old. How could they not be? Any baseball player was a grown-up.

I am still a little younger now than Boudreau was when he became Cleveland’s manager, but not by very much. In other words, I am older than 49 current major-leaguers, and that number is growing all the time. It’s not just that I’m no longer ignorant of age when watching baseball, but that age increasingly feels like the only thing that matters in baseball. Watch these men decay in real time. Remember how old you were when he was a rookie? Well, God, just look at him now, look at you now. Sometimes, though, that structure breaks—just a little, but enough—and it’s not that everyone feels equally like a grown-up, but that no one does, at all. 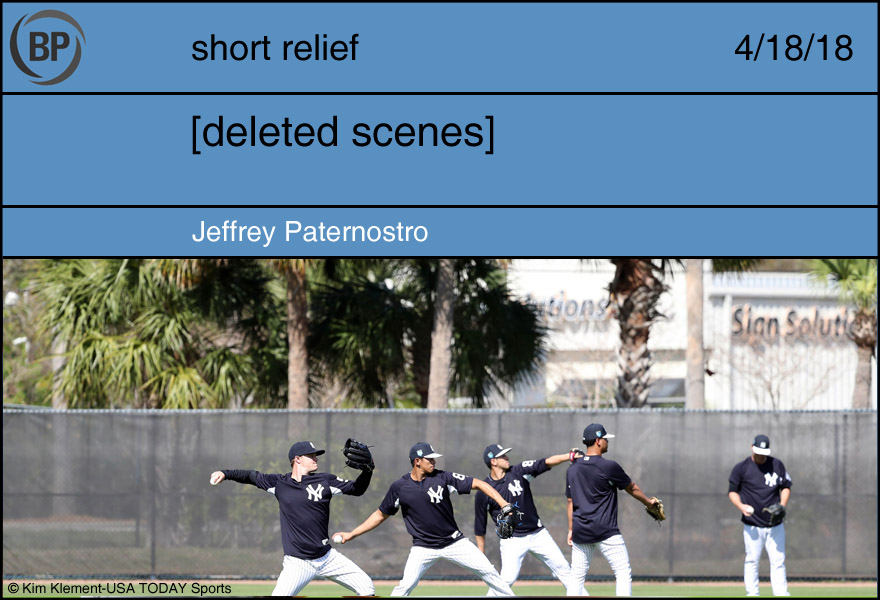 (Editor’s note: what follows are passages from Jeffrey’s prospect notes that were cut from initial publication, either for the sake of brevity or madness. They are presented here, unbound from context, in their original glory.)

1. No one wants to read a column entitled “And sometimes it rains” wherein I describe the dayboat halibut I had at a farm-to-table restaurant downtown after my first game of the year got rained out. It’s the kind of restaurant that lists the name of the boat that caught it and makes all their cocktail syrups in-house. I eat all my meals there in New Hampshire, but it’s usually only breakfast.

2. I had left exactly one game early in my life. I knew I had to pick my wife up at the airport, but I wanted to get a look at Collin McHugh in Double-A first.

3. I wonder sometimes about the inner life of adults that get drunk at baseball games on cold April nights and heckle twenty-something baseball players. What do they think about as they fall asleep at night?

4. I’ve griped before that I don’t know how to go to baseball games as a mere enthusiast anymore. I like watching baseball, no? This is why I ended up in this job. I suppose there’s a sneaky critique of capitalism in the idea that “do what you love, and you’ll never work a day in your life” is a bit of a lie. Anything is work if you do it long enough. The little indignities add up. The stadium is a pain to get to if I’m not coming from the office. You can’t get through two consecutive lights on green in Downtown Hartford at rush hour. I immediately sprayed ketchup all over my shirt thanks to a partially clogged Heinz dispenser. Everything’s just 15% more stressful. And even watching the game, I couldn’t shake the feeling that I should be working it. I’ve seen Ryan Castellani twice, think I have a pretty good feel for him. Jarrett Seidler has seen Justus Sheffield almost as many times as he’s seen Springsteen, and likes him almost as much.

5. His aesthetic could be roughly described as Joseph Gordon-Levitt going method for a multi-episode guest stint as a minor league ballplayer on Brockmire.

6. Last offseason I knocked off:

Dicte, a dour Swedish crime show starring the love interest from High Fidelity as a muckraking journalist, and a lead detective that looks exactly like someone I went to college with, but now older and Scandinavian.

This offseason they conveniently added the third season of Dicte, but then started with a weird kidnapping plot that ended with my favorite character getting killed off. So I soured on it after that. And anyway, writing while paying attention to subtitles is trickier when you have thirty lists to plow through.

7. UMBC pen arm Cory Callahan, who has given up six runs in two innings—though to be fair, far more than one of them should have been unearned—screws Bengston into the ground on a fastball running down and in to preserve the win. He then lets out what I think would loosely fit the clinical criteria of a primal scream.

Another quote from an Italian author runs through my mind as I head to my car.

“A classic is a book that has never finished saying what it has to say.”