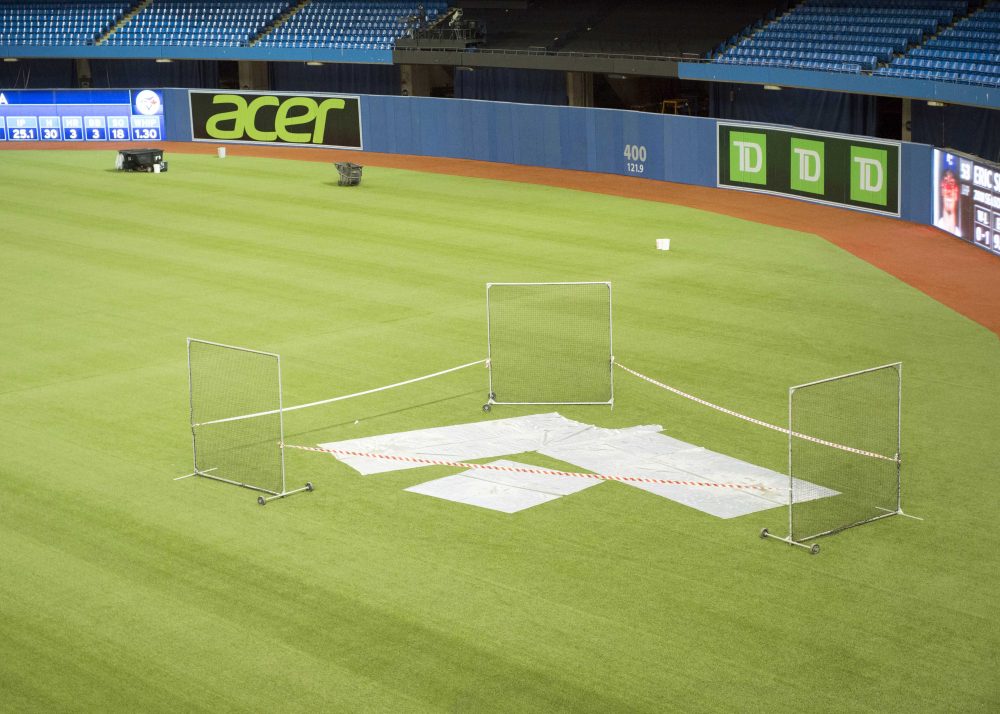 There’s been an ungodly number of rainouts and snowouts so far this season. It’s been unbearably cold in the Midwest and northeast, with all manner of precipitation. That’s led to conversation about whether baseball should change the way it schedules games to give more April home games to teams that play in warm weather or in domes.

It’s a complicated issue, given that teams understandably value mid-summer home games, as school is out and kids are available to come to the park to consume concessions and raid the teams store. There’s also the matter of having long stretches of road games. There’s no perfect solution if baseball is going to continue opening up in late March to accommodate extra off days. Those off days are certainly a good idea. The baseball season is an excruciatingly long slog, even for professional athletes.

You also can’t just drop a retractable roof onto every existing open-aired stadium. But when winter is refusing go away like this, even the domed stadiums aren’t safe.

The Royals and Blue Jays were supposed to have a game yesterday. The game was supposed to be in Toronto, where the Jays have a retractable roof. Ice and snow forced the game to be called off by making a rather rude intrusion through the Rogers Centre roof.

A tarp in RF and a hole. #BlueJays pic.twitter.com/hvIZIdCnKj

Ice fell from the CN tower onto the stadium roof and punched a hole through, because the evil winter spirits are coming for us all.

Ned Yost on the roof situation in Toronto: “If you come to a dome and get banged, something ain’t right.”

We as a people need to have a conversation. We’ve been told that Bryce Harper is human. And, to be fair, he looks like he’s human. It would be hard to look at Harper on the street and conclude that he was anything but human.

We’ve seen Harper get hurt before. He’s not a Kryptonian, unless his opponents have been smuggling kryptonite onto the field (would that be a sort of PED?). One would think that there is a limit to what a fully healthy Harper can accomplish on a baseball field.

I don’t know if we’ve seen it yet.

Benny “The Jet” busted the guts out of a baseball…

Yes, Harper’s bat sawed off the fists. Yes, the ball still went more than 400 feet. Maybe Harper is something more than human. It’s anyone’s guess as to whether he’s from Earth or some other place in the universe.

It’s been slow going for the Dodgers on offense. They simply haven’t been hitting like the juggernauts they’ve been for the last few years. They’re simply not hitting very much at all, really.

Thank goodness for the Padres.

Grandal’s grand slam capped off a ten-run effort against the Padres. Are they back for good? Who knows?

Pitching enthusiasts have guys they get excited about. These guys usually have nasty, X-rated stuff. Whether they’ve converted that stuff into winning is another matter. Pithing enthusiasts like to dream on guys and hope the whole mess of raw stuff comes together.

Luis Castillo is one of those guys. He utterly dominated the Brewers.

That’s eight strikeouts and an RBI to help his own cause. There’s a reason people are so high on Castillo. Give him time, and he may make them look very smart.

Did you know Daniel Robertson could do stuff like this?

Game 2 of the roof snafu-induced double-header at Toronto figures to be the better matchup. It’ll be Danny Duffy and Joe Biagini on the mound as long as the hole in the roof is patched and the artificial turf doesn’t turn into a swimming pool. Or they could just play through it. Live a little, folks.

We’d be remiss if we didn’t recommend watching the Indians and Twins play in Puerto Rico at 7:10 p.m. ET. It’s going to be really damn cool. Also, Corey Kluber is pitching. Check it out.

Once you’re done with that, it’s time for your weekly dose of Shohei Ohtani. He’ll have his biggest test yet as he pitches to the Red Sox at Anaheim. David Price will go for Boston.

You need to be logged in to comment. Login or Subscribe
Anthony Worrall
Can't find the the field dimensions for the Hiram Bithorn stadium in Puerto Rico, anyone know them ?
Reply to Anthony