When I saw that Shohei Ohtani was scheduled to be pitching another Sunday, I giggled because I assumed I’d be writing about him just like I had the previous two weeks, but Mother Nature is a cruel mistress and she had other ideas. Not only did she have a hand in postponing the Angels/Royals game, but also the Braves/Cubs, Twins/White Sox, Blue Jays/Indians and a Yankees/Tigers doubleheader that was only scheduled because their matchup on Saturday was already postponed due to inclement weather.

Looking at the score bug in Google Chrome was very strange. 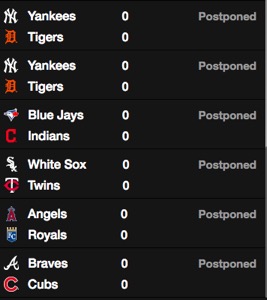 But all wasn’t lost; baseball fans were treated to a few good games.

Mets fans went home happy thanks to a walk-off home run in the bottom of the ninth by Wilmer Flores that beat the Brewers 3-2.

Before that, Noah Syndergaard was mowing down batters like it was no big deal, striking out eight in a row. The Mets now have a 12-2 record.

The Dodgers managed to win a game in their weekend series against the Diamondbacks because of a strong performance by Clayton Kershaw, who struck out 12 batters, and Chris Taylor who finished with three RBIs, including a two-run home run.

And on Sunday night, baseball fans were treated to a Bartolo Colon vs. Justin Verlander matchup in Houston that aired on national TV, turned into a pitcher’s duel and nearly produced a no-hitter.

Colon wasn’t even supposed to be starting. If Doug Fister hadn’t gone on the disabled list, Colon would have been pitching out of the Rangers’ bullpen. Instead, Colon shut down the Astros offense for seven innings.

He lost a perfect game when he walked Carlos Correa to start the eighth inning, and lost the no-hitter when he gave up a double to Josh Reddick.

Verlander only surrendered one hit in eight innings, a solo home run to Robinson Chirinos in the third inning. He struck out 11 and walked one.

Colon was taken out with two outs in the bottom of the eighth and after Houston had tied the score 1-all.

It remained tied until the 10th inning, when the Rangers led off with three straight hits off Hector Rendon. Joey Gallo hit a single, Ronald Guzman hit a ground-rule double and Chirinos hit a two-run double. He nearly single-handedly beat the Astros, 3-1. Houston would get the tying run on first in the bottom half, but Jake Marisnick struck out swinging to end the game.

What a night, #BigSexy! pic.twitter.com/xoUOD82JpM

On Saturday, the Cubs were down 10-2 to the Braves in the sixth inning. Their fans were miserable, it was cold, and they weren’t playing well at all. Then, well, they made a miraculous comeback. The Cubs scored nine runs in the eighth inning and won 14-10, shocking both the Braves and their own fans who had given up on them earlier in the game. It was Chicago’s biggest comeback since 1989.

At Kansas City, Mike Trout was doing Mike Trout things against the Royals. Like hitting a baseball really far in a driving rainstorm while the wind is blowing into your face.

Mike Trout is incredible and he is still not appreciated enough by baseball fans—which is ridiculous. Forget worrying about pace of play, Rob Manfred, worry about not marketing guys who should be your superstars.

Also on Saturday, the Rangers saw two players hit their first career home run in the same game for the third time in franchise history. Both Isiah Kiner-Falefa and Ronald Guzman went deep against the Astros.

The last time that happened was nearly 15 years ago in July 2003 when Laynce Nix and Jason Jones homered in a 10-6 loss to the Angels.

The Marlins are visiting Yankee Stadium, so Giancarlo Stanton will be facing his former team for the first time since being traded to New York. Luis Severino, who was supposed to start this weekend against the Tigers, finally gets the start against former Yankee Caleb Smith. Marlins owner Derek Jeter isn’t making the trip with his team. He said it would be awkward. (6:35 p.m. ET)

The first-place Mets and third-place Nationals are playing again, this time in Queens. Jacob deGrom and Jeremy Hellickson are matched up. (7:10 p.m. ET)

The Astros are traveling up to the Pacific Northwest to face the Mariners in what could turn into an intriguing series. Dallas Keuchel and James Paxton are the starters in the series opener. (10:10 p.m. ET)