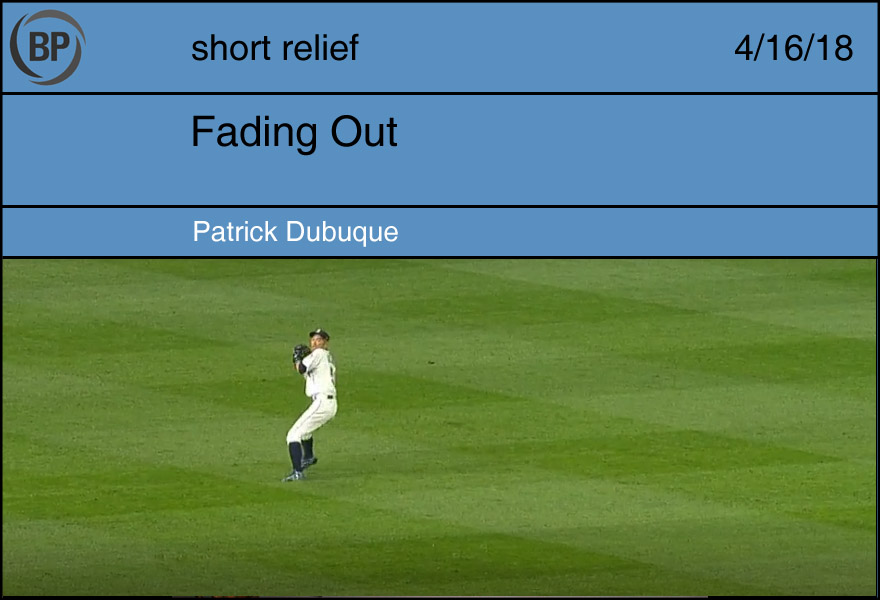 The terrible thing about growing old in 2018 is that everyone else talks more like Lenin and I just look more like him.

It’s a Saturday in mid-April, and stinging rain pelts the retractable roof of Safeco Field, and the summer is almost over. I am sick, and amongst the youthful chatter, I feel terribly old. Ben Gamel’s rehab assignment is nearly complete; it already would be, except the Mariners are facing a pair of lefties in the following days. Soon, though, the team will have five outfielders in an era when four is treated as a luxury. And Ichiro is batting .200, five singles and no walks in 25 tries.

It wish it were September, with its oversized rosters and meaningless games, its tourmaline sunsets, when one spends time with baseball rather than watches it. Instead the 7-4 Seattle Mariners cling to relevance, on the micro and macro levels. Bottom 2: Ichiro stands in the box, eyes creased with concentration, the right hand pointing the bat upward, the left twitching at his right shoulder, the familiar stick figure that defined a decade of this stadium. The gray luster of the matted helmet combines with his beard, and the wrinkled jersey hangs on his lithe frame.

The truth is that from our vantage, deep up the third base line, Ichiro just looks like Ichiro, one pixel more narrow than the other players. And in almost every moment of the game, the resemblance holds: the posture, the air. Until it doesn’t.

Top 3: Mark Canha lines a base hit to left, and while it’s struck sharply enough to require hurry, Ichiro lines himself up for a throw to the plate. As the ball leaves his hand, everything about his mechanics are perfect, sharp and taut, the exertion just faintly palpable. The throw is online. And yet the ball lands fifteen feet in front of home plate and skids to the backstop behind the sliding runner.

Bottom 3: Ichiro pivots on a high 2-2 fastball that’s almost out of the zone. The indecisiveness works in his favor; the ball chops just over the outstretched arm of A’s starter Kendall Graveman, into one of those dead zones in the infield that give the sport is unjust character. Semien charges, tosses to first. 2001-2017 Ichiro are safe on the play. The current iteration is out by a camera frame.

This is what old age is: not the chasm we see in the cruel numbers that serve as a man’s eulogy, but the loss of a sliver of skill that presents itself a mere sliver of the time. In a way, it’s lamentable: Ichiro was not brought here with the fanfare and promise of Griffey, but to see our heroes decline is always an insult to our own assumed invincibility. And yet, the alternative is what feels like the lie, the idea that he’ll be gone next week and Ben Gamel, a footnote of a man, will stand in his grass. I want Ichiro to play forever, in Miami, Japan, Taiwan, Bakersfield, rec-leagues in the Bellevue metro area. I want a vision of age that’s as graceful as the man himself, quiet and deliberate, the music you can no longer quite hear but instead just sing yourself, a song you never forget. 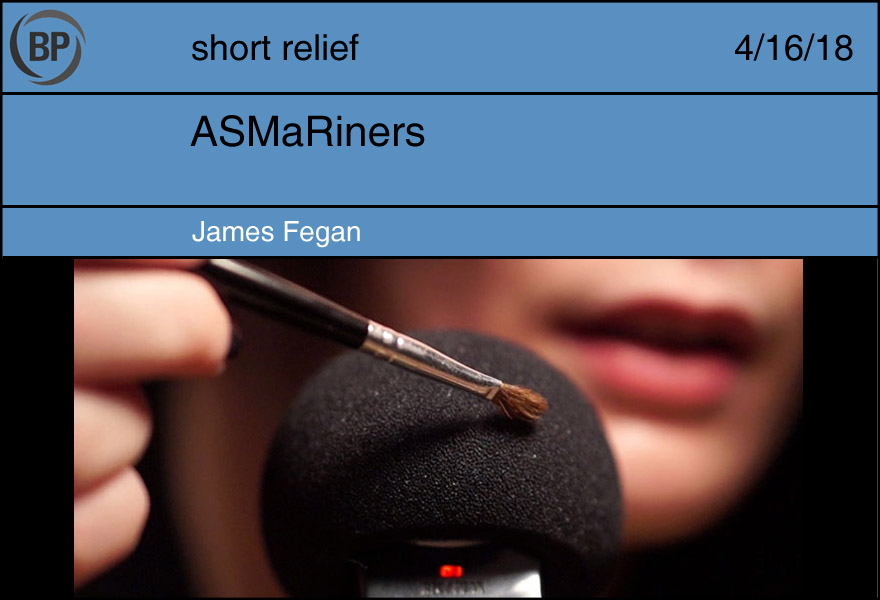 So this one will be very close and tingling! ♥ Maybe too intense for some! I am still learning to calibrate this mic with the right volume for his breathing! Next will be better!! :)))
The Mariners and Scott Servais will be very happy to get your support for more recording equipment on our Patreon! And the next PHOTO EDITION is coming soon ♥♥♥

Hey y’all! So, I’m not a center fielder, but I thought I’d try playing one on the Mariners. 😉 Since I’m a big fan of hypnosis videos for both ASMR and defensive spectrum purposes, I thought I’d try one of my own. Since this is my first attempt at this type of role play, I’d love to know what you think!

I hope this assignment helps you to tingle, relax, and drift through the batting order two times before the bullpen has to get up!

In this episode of Celebrity ASMaRiners, Robinson Cano whispers as he makes underhanded throws to first, ambushes first-pitch fastballs, strokes peacock feathers, drinks gatorade and squeezes a stuffed cat while purring. Robinson recalls learning the net drill from Kevin Long, wearing the Swelmet, what Jeter week means to him, his breakout 2006 season, playing April Ludgate on ‘Parks and Recreation’ and whether he’ll ever be in a playoff game again.

Hey Jerry (: I darkened this video footage a bit as a little test to make this tapping video a bit more anxiety-inducing! Let me know if it’s something you like! Excuse the fact that I look a bit uh…ratchet in this video. Ever since I started turning to Juan Nicasio in high-leverage, my skin has been revolting against me. *sigh*

I wanted to shoot a classic trigger video because my natural nails are the longest they’ve ever been and lord knows I’m going to accidentally break them sooner rather than later while trying to figure out who my fifth starter is so… whee! There’s not much to say, but I hope you enjoy the whispered rambling and tapping/scratching of some new and some familiar Mariners shortcomings C: 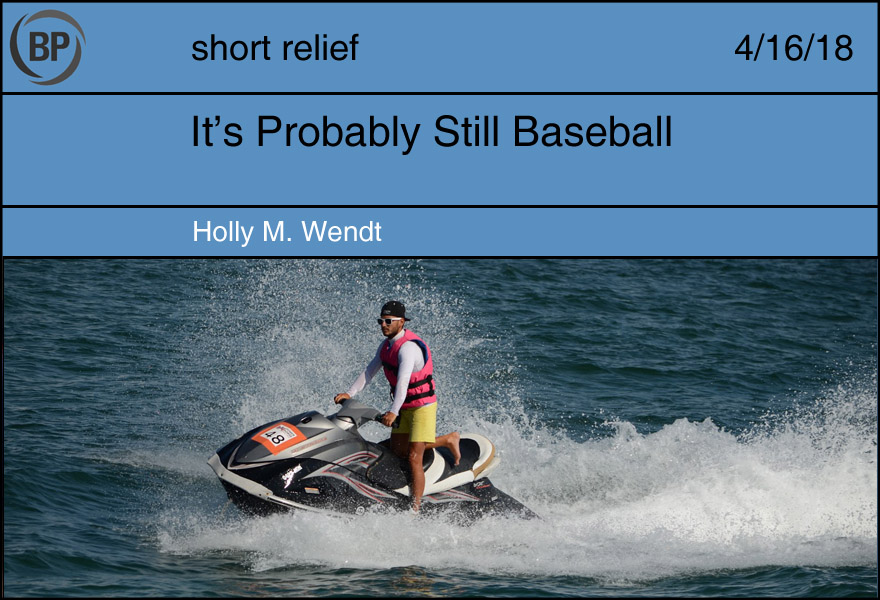 After an in-class discussion of Patrick Dubuque’s delightful short story “Around the Glacier” in Literature of Baseball this past week, I asked students to put themselves in small groups and come up with their own variations on this game to which we’ve devoted a whole semester’s reading and writing.

Three groups turned the game into a race around all the MLB parks, offering various restrictions on starting points (home plate as the home stadium of the previous year’s World Series winners) and travel (air travel versus road trip). One group offered a particularly cruel artifice for progression: the team couldn’t depart for the next field until they (presumably normal mortals) achieved a hit against the MLB team’s ace. Following this weekend, it seems likely a lot of teams would be stuck in Washington, D.C. for a while.

Two groups proposed a game on the tidy, recognizable confines of the usual diamond, but with modified fielding. One described how the defense would have to move the ball across the diamond via over-unders, while baserunners would have to progress according to a series of A-skips to first, cartwheels to second, A-skips to third, and back handsprings home. The other group replaced all of the fielders (save the pitcher and catcher) with a single dog.

Another group added a trampoline on the third base line, to offer the possibility of leaping over the catcher entirely. The same group also proposed an additional player in the outfield, sent by the offense, to distract the fielders, resulting in baseball that borrows a little bit from Slamball and a little bit from Quidditch.

Two groups moved the field to water: one proposed the game as we know it, but on paddleboards, with the potential to have to dive for the ball, and the other offered a frankly Bond-villain-esque contest involving swimming to bases through shark-infested seas and using a bat made of the long bone in a hammerhead shark’s skull. Umpires are permitted to ride on jet skis.

How much can we change baseball but still recognize it as itself?

Despite the fact that the class has discussed, and been miffed about, to varying degrees, the various “pace of play” alterations that the league has instituted, and we’ve discussed various historical changes in the game, baseball remains remarkably resilient, adaptive despite itself (and ourselves). The class decided that bases—the idea of bases, no matter how many of them—were important if we were deciding what counted as baseball, as was the idea that the game must be won or lost. No ties. Outs, or some clear demarcation between time spent on offense and time spent on defense (and no ability for one to become the other, unlike soccer, basketball, hockey, and football), also seemed significant. Beyond that, they were willing to entertain most other alterations, including dogs. Perhaps especially dogs.