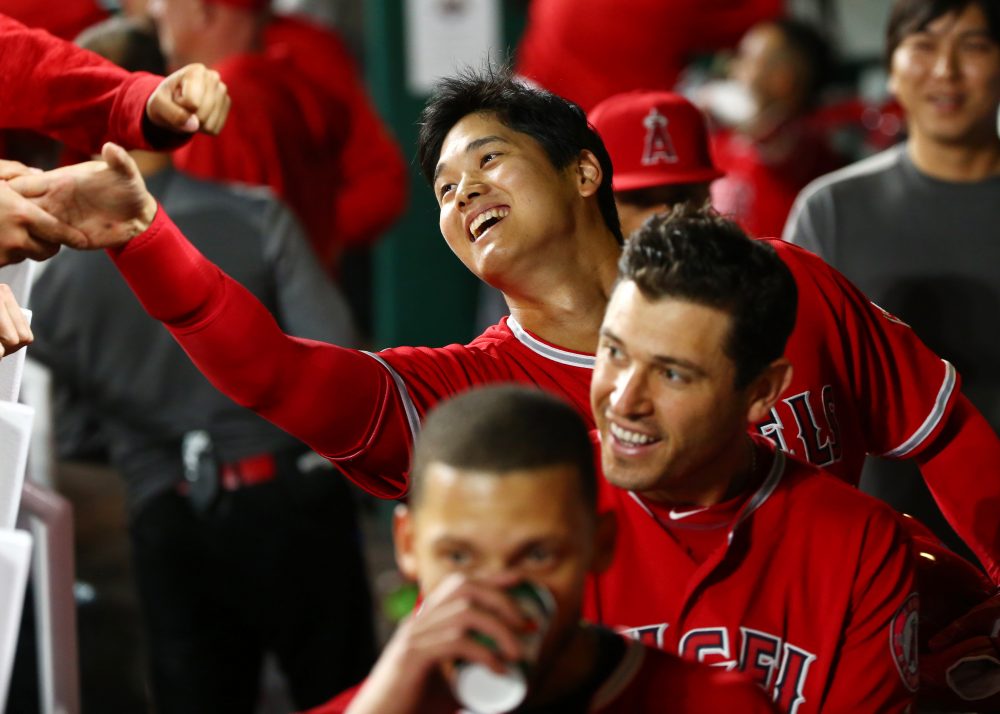 Before every NBA season, prominent basketball writer Zach Lowe ranks each basketball team in terms of watchability with his NBA League Pass Rankings. If there were such a thing for MLB.tv rankings, then I’m going to go out on a limb here and suggest that the Los Angeles Angels would be at the top of those rankings at the moment.

The biggest reason for that would have to be the spectacle of seeing Shohei Ohtani display his skills as a threat on the mound and at the plate as well. On Thursday night, the Angels were up 3-0 on the Royals in the seventh inning with two outs and the bases loaded. After the Royals had introduced Ohtani to the way that we now do intentional walks here in the United States (which elicited a hilarious reaction from Ohtani), Kansas City didn’t have anywhere to put Ohtani this time around.

Shohei Ohtani: the man who would rather hit than take an intentional walk@Angels | @MLBONFOX pic.twitter.com/Q5E171SfVm

Just like that, the game was broken completely open and Ohtani had delivered yet another moment of must-see TV for those of us watching from home.

Meanwhile, if you’re coming to see the Angels show for Ohtani, then you’re going to be staying for some guy named Mike Trout. He’s sort of good at this whole baseball thing as well and he gave us all a very loud reminder of that in the very next inning.

Trout ended up going 3 for 4 with a walk on the evening. Betting on him to have nights like this on a somewhat regular basis is one of the safest bets in this sport right now and in an ideal world, seeing one of the consistently great baseball players of his generation ply his craft night in and night out would be plenty of reason to tune in to the Angels.

But now you get that, plus Ohtani turning his at-bats and starting outings into appointment television, Andrelton Simmons marauding around at shortstop, Justin Upton continuing to be a solid slugger and you even get Albert Pujols chasing down 3,000 career hits.

They may not have a title in their future but they’ve already surged to the top of the MLB.tv rankings in all of our hearts. Seek out the Halos and watch them.

• If you’re a Twins fan and you aren’t walking around shining today then I’m confused. After all, you got to see Jose Berrios completely confound the White Sox over seven innings of brilliance. He struck out 11 batters while only giving up three hits and zero walks.

You also got to see hometown hero Joe Mauer send a grounder into center field for two insurance runs and 2,000 career hits. So you got to see the heroes of the past, present and future combine on a night of glory and victory. What more could you want from a single night?

• Meanwhile if you’re a White Sox fan, then I suppose that you can take solace in the fact that the day didn’t go too well for the Cubs. In fact, the Cubs were simply passengers on the power trip that Gregory Polanco went on yesterday. Polanco went 2 for 5 on the afternoon but the “2” were sent into various parts of the bleachers at Wrigley Field and the Pirates ended up cruising to their ninth victory of the young season.

• Gregory Polanco wasn’t the only one who had a two-homer day on Thursday. DJ LeMahieu did wonders for his early season OPS by going 4-for-5 with a double and two home runs. If it feels like it took forever for that first dinger to leave the park, then maybe the the launch angle and exit velocity should explain the leisurely pace of that ball’s exodus from the stadium.

• LeMahieu’s first homer in the 5-1 Rockies win over the Nationals wasn’t the only leadoff homer of the day. Francisco Lindor actually got things going for Cleveland by hitting a leadoff rocket of his own into the bleachers in left field. That was only the start of a 9-3 beatdown of the Tigers. Don’t look now, but Cleveland’s offense put up 18 runs against the Detroit over the four-game sweep and it appears that they’re shaking off the brief winter malaise that followed them into the regular season.

• After we were treated to two Royal Rumbles in one day thanks to the Padres trying to thump the Rockies, and the Yankees and Red Sox renewing the nastier part of their rivalry, it was back to bases, bats and balls instead of fists, shoves and flying gloves. One person who clearly welcomed the focus on the baseball side of things was Rick Porcello, who reached back to that vein of form that helped win him a Cy Young out of nowhere in 2016. He actually took a no-hitter into the seventh inning and he exited the by ending his night with the final two of his six strikeouts.

Judging by Jesse Winker’s initial reaction to hitting a pop fly into foul territory, he already knew that it wasn’t going to end well. There was a chance that it was going to harmlessly fall into the seats, but Marcell Ozuna had other ideas and completed the second-best heist of the day.

Ozuna’s robbery in foul territory was going to be the play of the day until Austin Hedges pulled off this brilliant bit of defense behind the plate. Thursday night was a horrible night for the Padres as they got one-hit in historic fashion by the Giants but they at least have this moment to remember from a forgettable night!

We’re now two weeks deep into this season and the Mets are currently 10-1. The first half of April is a magical time where nearly everybody has hopes of a hot start translating into something special. Who knows what the future holds for the Mets but you can’t take those 10 wins away from them and they’ll be looking to Steven Matz (5.55 DRA and 111 cFIP in 2017) to help keep things going against the Milwaukee Brewers, who will be sending Zach Davies (4.00 DRA and 101 cFIP in 2017) to the mound in an effort to slow down the early NL East frontrunners. (7:10 p.m. ET)

If the Senior Circuit’s brand of baseball doesn’t appeal to you, then the American League should have an interesting matchup on hand for you at the same time as the Mets/Brewers game. Cleveland is starting to heat up offensively and after they picked up a four-game sweep of the Tigers, they’ll try to keep the heat on as they welcome the Toronto Blue Jays to town. Both are 8-5 but the home team has lofty expectations while nobody’s really expecting to see the Blue Jays make a big run in the AL East. Still, the records say it’s an even matchup and even though they’re only 13 games in, it’s still nice to see matchups like this at any point in the season.