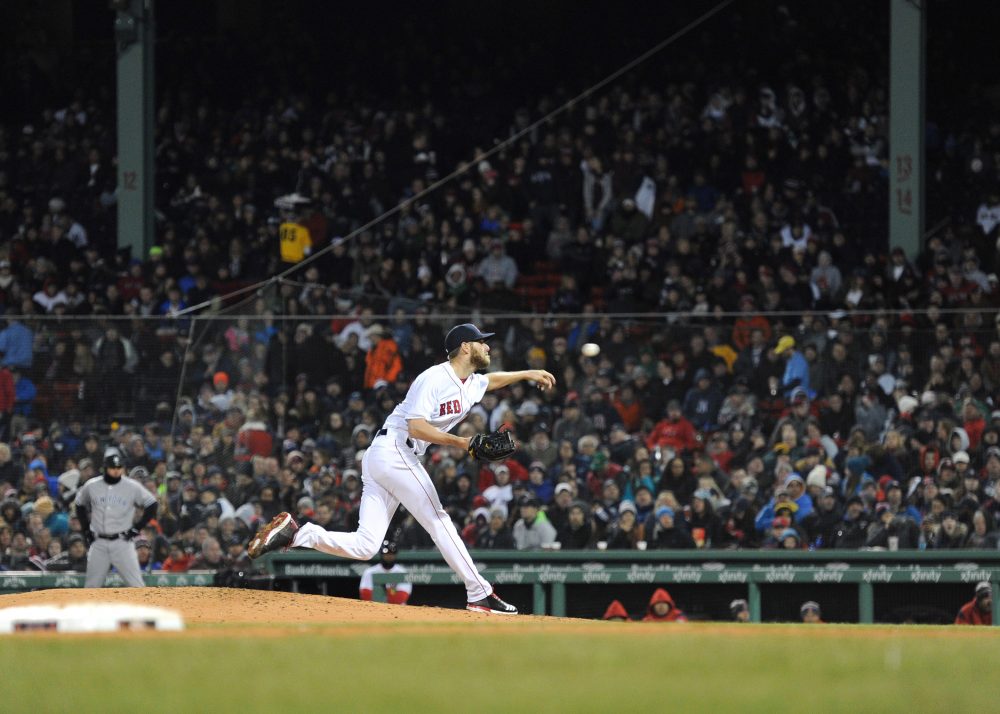 One of the best things about the first couple weeks of the season is that, until schedules start to spread out via off days, rainouts, or injuries, you often see a multitude of aces lined up to all pitch on the same day—sometimes even opposing one another.

The slate of games Tuesday featured an assortment of premiere arms for your viewing pleasure—Stephen Strasburg, Jacob deGrom, Carlos Martinez, Aaron Nola, Aaron Sanchez, Dallas Keuchel and even Felix Hernandez, if you’re one of those nostalgic types.

But the main event was Chris Sale vs. Luis Severino as the Red Sox and Yankees, teams who (I’m told) have a bit of a rivalry, squared off for the first time this season.

And yet0 with two of the Top 3 AL Cy Young finishers from a year ago on the mound, it was Mookie Betts who stole the show.

Betts crossed home plate five times, including the above grand slam that put a stamp on sixth inning, when the Red Sox scored nine and Tommy Kahnle completely lost his mind. (Cover your ears, kids).

Sale was Sale, scattering eight hits, walking none and striking out eight in six innings of work. The one run he allowed was… well, I guess it’s fortunate for him it was only worth one run.

Round 2 comes Wednesday with another solid pitching matchup of Masahiro Tanaka vs. David Price. The Yankees have a lot of work to do as they enter the day trailing by 13 on aggregate. But hey, after what A.S. Roma did on Tuesday, anything is possible.

OK, so Sale was good and Severino was not. What about the other guys?

Strasburg tossed eight scoreless innings against Atlanta. He pitched around a bit of trouble in the first inning and later completely locked in, striking out eight and not allowing a Braves hitter past first base in the final six innings. The Washington ace was aided by some… uh, less-than-stellar defense that allowed Ryan Zimmerman, he of 20 career triples in 14 seasons, to drive in a pair with a three-bagger in the second inning. Watch Invader Zim be interviewed about it:

Nola found himself unexpectedly matched inning-for-inning by Homer Bailey, of all people, with the latter taking a no-hitter into the sixth. Around that time, the Phillies tweeted this:

.@Reds — why haven’t you tweeted that your starter has a no-hitter going? Seems odd that you wouldn’t mention the no-hitter that he is currently throwing through five innings.

And the wheels fell off for the Reds:

Nola, who finished with six strikeouts in eight innings, went from being on the wrong side of a no-hit bid to a victor, thanks to the second career home run and first career grand slam by Scott Kingery.

Sanchez saw Bailey’s no-hit bid and raised, going into the eighth inning without allowing a hit against Baltimore, despite walking five. The Orioles strung together three straight hits—including a Tim Beckham double that was totally not an error—to not only end the bid but take the lead. Brian Dozier declined comment on the Orioles’ actions. Curtis Granderson saw to it that Sanchez and the Blue Jays went home winners anyway.

The Mets seemed well on the way to their ninth win in 10 games to open the season when they handed Jacob deGrom a 3-0 lead against the Marlins’ line-up of misfit toys. It didn’t last, thanks in part to Justin Bour.

Oh, wait: The Mets did still win their ninth game in 10, because LOL Marlins.

DeGrom didn’t seem too upset about allowing four earned runs in six innings because the Mets, inexplicably, are off to their best start in franchise history.

Martinez was long gone from the game by the time Brewers-Cardinals was decided. He allowed just one run in six innings but the issue for the Cardinals, as has been the case this season, was with the bullpen. After Bud Norris and Matt Bowman did their best to hand Milwaukee the victory, Matt Carpenter saved the day.

What’s with all the walks, man? Keuchel’s matchup with the Twins and Jake Odorizzi saw nine combined free passes issued by the two starting pitchers. When the Twins did make contact, however, Furious George Springer was there.

Finally, there was Hernandez, who cruised to a win thanks to a Seattle offense that jumped all over Kansas City starter Eric Skoglund. Mariners closer Edwin Diaz pitched in a non-save situation, and yeah, small sample sizes and all that, but what he’s done thus far this season is kind of cool, I guess:

Giants have zero pitchers, but still get win

Paul Goldschmidt hit his first (really?) home run of the season for Arizona in the top of the ninth inning, but the D-backs still lost 5-4 to the Giants, because Jorge De La Rosa walked three batters in the bottom half, and Andrew McCutchen walked off with a two-run single to give the Giants the win on the same day they placed Johnny Cueto on the disabled list—although he should be back next week.

With Cueto joining Madison Bumgarner and Jeff Samardzija on the DL, the Giants called up Tyler Beede to make his big-league debut. He was a bit erratic, as one might expect, walking five over four innings. But given his prospect pedigree and the fact that the Giants are currently running the likes of Ty Blach, Chris Stratton and Derek Holland out there every fifth day, he should get at least a few opportunities to establish himself.

I feel like it’s mandatory at this point to mention anything Shohei Ohtani does during a baseball game. Well, he appeared for the Angels in a game he didn’t start on the mound or appear in the lineup, instead coming on as a pinch hitter in LA’s destruction of the Rangers. He faced a guy who may know a thing or two about being an Internet sensation:

Guys, this is NOT a drill.

Ohtani grounded out to second base. Bartolo 1, Shohei 0.

Defensive play of the day

With apologies to Springer, Francisco Lindor, Hunter Renfroe, and Harrison Bader, the day belongs to Devon Travis as he A) kept Sanchez’s no-hitter at the time intact and B) avoided what was nearly a very scary collision with Steve Pearce.

The outfielder for whom the Blue Jays acquired Travis is now on his fourth organization and converted to pitcher a year ago.