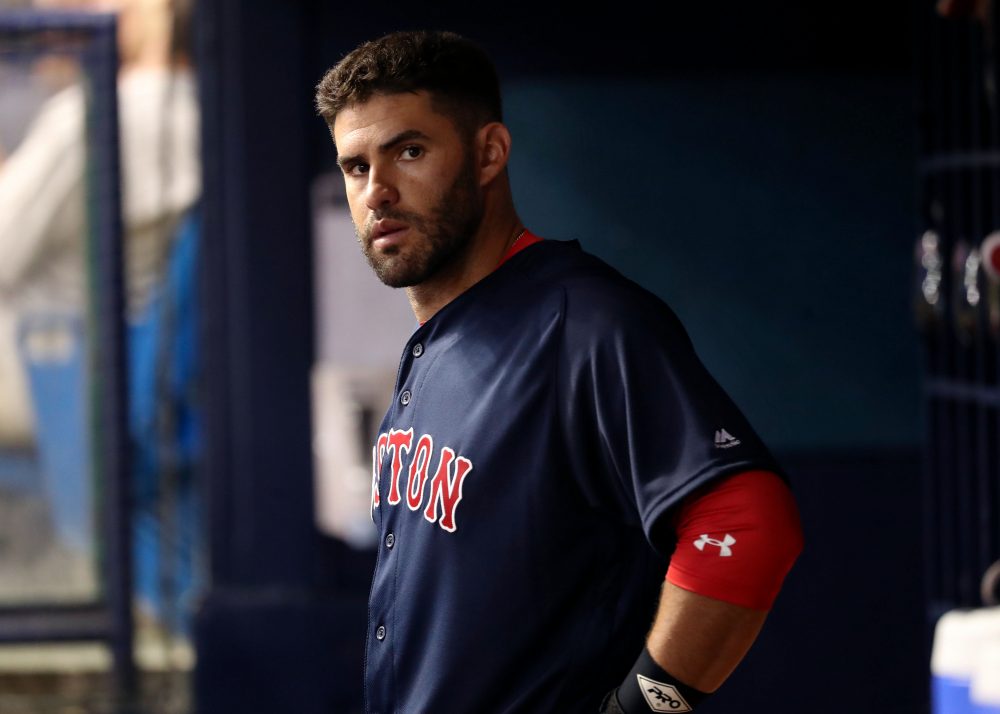 J.D. Martinez and the Red Sox are a match made in heaven, a logical outcome, a natural pairing, a perfect fit.

That’s what we heard all offseason, and it might very well be true. The Red Sox were a solid enough offensive team last season—they finished 10th among all MLB teams in runs scored, despite all the hand-wringing—but were only 27th in home runs and 26th in slugging percentage. Their 93-win team was kept almost entirely intact, and Martinez, who finished third in the majors with 45 bombs and first in slugging percentage at .690, is the piece who’s supposed to take them over the top.

Martinez had no shortage of suitors, but a union with the Red Sox make plenty of sense for him, too. They feature a young and star-studded team in the middle of their contention cycle with a hitter-friendly home ballpark. Most importantly, they had the financial resources to make him a strong offer: a five-year, $110 million pact with player-friendly opt-outs after years two and three (and a more complicated one after year four).

There is just one complication, really. In mid-December, Michael Silverman of the Boston Herald reported that Martinez told the Red Sox he’d be open to signing with them as a designated hitter, but only if he was assured of receiving some time in the outfield as well. In some ways, it’s the kind of news that only makes headlines when the Hot Stove is too damn cold. “Player X would prefer to play Position Y” is hardly a unique scenario, and it’s not like Martinez demanded to play the field full time. Unwilling to lose the preeminent free agent bat available to a few hundred innings of poor defense per year, the Red Sox acquiesced.

But baseball, as it’s wont to do, tests you early and often. The first two weeks of Boston’s season have made it obvious why promising Martinez outfield playing time is more of an issue for the Red Sox than it would be for most teams, and why some already want the front office to go back on their word. Martinez isn’t just costing the Sox some runs when he’s got a glove on; he’s also subtracting from what is perhaps the team’s biggest strength.

There’s a solid argument to be made that the Red Sox have the best defensive outfield in baseball. Mookie Betts is a sparkling defender who mans Fenway’s notorious right field with skill and with flair, and he’s earned his back-to-back Gold Gloves. Jackie Bradley gets lost in a division that also boasts Kevin Kiermaier and Kevin Pillar, but he is among the game’s elite defensive center fielders. Andrew Benintendi may “only” be a 60 defender on the scouting scale, but he’s good enough to play field center for at least a third of the teams in the league. He combines with Betts and Bradley to form a devastatingly effective outfield trio that turns gappers into singles and some homers into outs.

There’s no argument to be made that Martinez is anything but a poor defender. Our FRAA stat indicates that Martinez cost his teams in excess of 50 runs in the field between 2012 and 2017. UZR tells a kinder story, but still puts him at -10.2 runs for his career. Don’t like defensive stats at all? It’s tough to blame you, but this isn’t a case of the eye test vs. metrics—Martinez often looks like a mess on the grass, too.

The most prominent early season example of Martinez’s defensive deficiencies comes from the play on which Xander Bogaerts was recently injured:

The lack of familiarity with Fenway Park’s Green Monster we can understand—even good outfielders are made to look like fools by the (extremely Jerry Remy voice) caroms baseballs can take after hitting the wall. But the throw in to the infield … yikes. That’s a throw any competent outfielder needs to be able to make. It’s not Martinez’s fault that Bogaerts got hurt, of course, but the aesthetics aren’t good nonetheless.

Just a few innings earlier, Martinez had the chance to turn an easy double play when Rob Refsnyder lined out to him in left field and Adeiny Hechavarria was stranded off second base. Instead, Martinez airmailed the easy throw to keep the inning alive. One batter later, Matt Duffy singled in a run. At the time, it looked like the Red Sox may lose their (gasp) second game, and that Martinez’s defense would be a big part of the reason why.

It’s early in the season, and cherry-picking a few bad plays from Martinez in a new ballpark in frigid weather is perhaps unfair. Plus, as poor as Martinez is in the outfield, he is not a “Hanley Ramirez in 2015” type of unmitigated disaster. Still, viewed within the context of his entire defensive career, Martinez’s early struggles seem more a harbinger of what’s to come than a bunch of nitpicks.

All of this leaves the Red Sox with three choices: they can honor their promise and keep playing Martinez on the grass; they can push Martinez to be a full-time (or nearly full-time) DH now that the ink is dry; or they can put the ball in Martinez’s court, so to speak, and let him play himself out of the outfield rotation.

The first choice has obvious pros and cons. It will keep Martinez happy and meshes with rookie manager Alex Cora’s overall desire to routinely rest his regulars. At the same time, it’s likely to cost the Red Sox some runs—especially if Martinez mans right field. It’s tough to blame fans who cry out in anger when a ball that Benintendi or Betts would’ve reached with ease falls feet away from Martinez’s outstretched glove.

Door no. 2 may be tempting in the short term, and contractually the Red Sox are likely within their rights to keep Martinez’s glove in the dugout and his bat in the lineup. But breaking their oath so early in the season is not without potential perils. For one, baseball is not an expansive universe—it’s insular. The Red Sox will need to sign free agents again, and do not want a reputation as a team that reneges on their word. It may be impossible to quantify the value (or lack thereof) of having a good reputation among free agents—there’s no GlassDoor for the Hot Stove, so far as we know—but it’s not a stretch to think reputation matters to at least some extent. Plus, alienating Martinez three weeks in to what the Sox hope is a five-year pact has obvious drawbacks. They have enough potential problem children for Cora to manage; they don’t need to add Martinez to the mix.

That leaves the third option as the most appealing, or at least the most likely. The Red Sox can continue to run Martinez out there defensively once or twice a week, but can tell him they will only do so for as long as his play justifies that decision. Cora and company can’t expect Martinez to morph into a genuine defensive asset, but they can demand that Martinez learn Fenway’s eccentricities, that he make some improvement, that he at least hits the cutoff man. They can demand adequacy, if not excellence.

We make a lot out of “logjams” or “timeshares” or “undefined roles” in baseball, but over the course of a 162-game season, lots of problems take care of themselves. Perhaps one of Betts, Benintendi, or Bradley will miss time, and Martinez will need to man the outfield more. Perhaps Martinez will be more willing to accept his limitations for the good of a team that looks to be a World Series contender. Or maybe Martinez will go full 2015 Ramirez, and the Sox will have to modify their agreement.

It’s too early for anything drastic right now, too early for the Sox to break a promise. Boston is 9-1, Martinez is here to stay, and there’s plenty of baseball in front of us. For a little while, at least, the Red Sox don’t need to make any tough decisions.