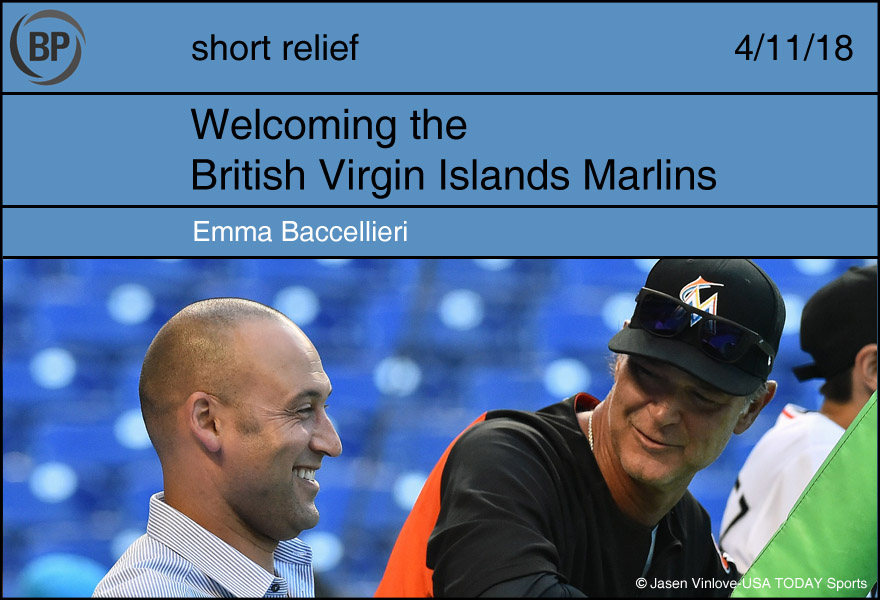 The British Virgin Islands Marlins celebrate home runs by setting off the miniature volcano in left field. “This is just how the islands themselves were created!” the team’s publicity office crows when the great gurgling mass is unveiled. When a television reporter discovers a few weeks later that the “highly technical live-action sculpture” actually runs on baking soda and vinegar, the team initially denies it, and then tries to start a partnership with a local grocery store to supply the materials. This falls through.

“Oh, no, you see,” the executive explains, pausing for a sip of coconut water, “all this the turnover is strategic. It’s a feature. Think of it as tourism for the team—we’re building off the island’s economy, its spirit, its praxis! That’s all. You could say that all that we’re doing here is just inspired by the industry here, really.”

The British Virgin Islands Marlins pay homage to their surroundings by embodying the spirit of local landmarks throughout the park. And not just Scrub Island, the front office will be quick to tell you, though that’s a common misconception—no, there’s so much more! There’s Frenchman’s Cay in right field, a memorial of sorts to franchise icon Juan Pierre. (Included: a special plaque to commemorate the fact that he finished sixteenth in MVP voting in 2004.) There’s Eustatia, which really is just like the nearby island that shares its name of the Greek word for a nice place to stay. It’s the most perfect little patch of seats down the first-base line, always shaded just enough to be comfortable without being cool, with the sweetest breath of breeze. Necker Island, for the publicly affectionate, over in the outfield pool. And there’s Mosquito Island, of course, because how could there not be? This one is the cheapest to maintain, and also the biggest part of the park, but that, of course, is just a coincidence.

Each year, the British Virgin Islands Marlins celebrate the feast day of Saint Ursula, whose 11,000 virgin handmaids provided the story behind the islands’ name. Legend has it that they accompanied Princess Ursula on a long voyage to meet the man who would become her husband, but the entire virginal crew met an untimely death en route when they were beheaded by the Huns. In memoriam, each season, the British Virgin Islands Marlins field a team of fresh-faced youths to valiantly try and fail against stronger and more experienced opponents. 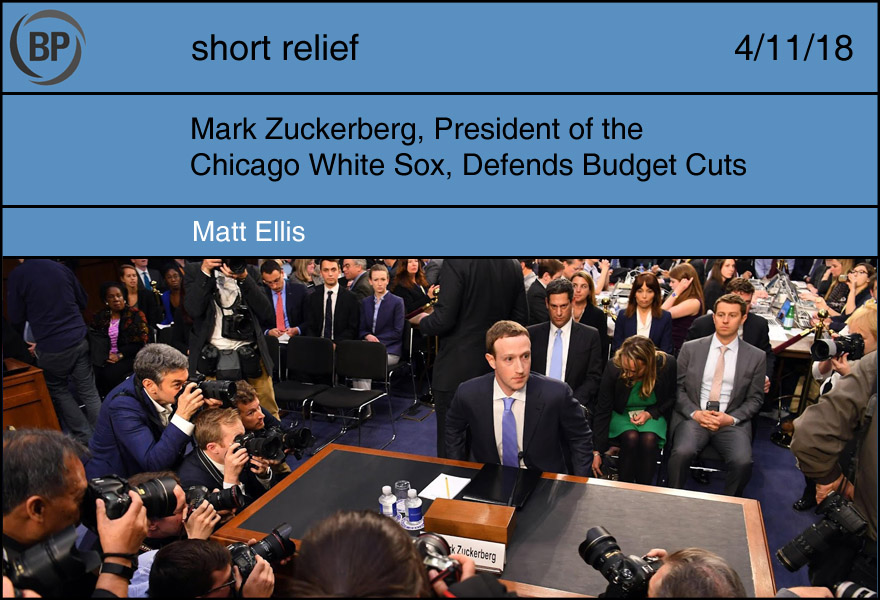 Madams, Gentlemen, let me first start by thanking you all for giving me the time to testify in front of you all here today. I remember the first time I sat in this chair, that April afternoon back in 2018 before the bread riots, when I couldn’t imagine how it could possibly get any worse. How little I knew then.

First, I want to stress the point I’ve made repeatedly in interviews and my earlier deposition during the Mueller investigation in 2019: I did not leak the data from our player ops to the Milwaukee Brewers in order to game the market in favor of my new investment group’s feasibility to–

(legal council whispers) Mr. Zuckerberg, do not under any circumstances describe your work on the new Red Line renovations, and in fact, please hesitate from t–

Fine, fine. It seems to me the main issue here is in the sanctity of protecting internal data for major league baseball in regards to our international prospects who have little to no rights in the system as is currently designed. I understand why you think this is a problem–and let me be clear, after the self-imposed regulations we put onto facebook in 2020 I need not articulate any further how seriously we take this issue in Southern California. Nevertheless I would like to point to a number of issues that stand in the way of letting my company run as we planned this rebuild to function:

1. There is a standing claim that we in the Chicago White Sox organization have “collected” “data” on every single team in the league, and I need not point any further than the deplorable witch-hunt enacted at my colleagues in the St. Louis Cardinals Organization in years prior. I suppose, when we think technically, it is possible that our infrastructure was able to mine all the proprietary prospect information from each team in the league but you have failed to ask the important question of what if we were nice and didn’t look at any of it? I have not heard any of this, and I take these concerns only as seriously as they take me.

2. As Senator Svart has noted, our ownership group has taken a long lead over fleecing the local economy for tax handouts in favor of ticket price reductions and the like. I find it personally upsetting that the good work that I have done has not been noted–the important work our organization has done to rejuvenate the South Side and even, if we are being honest, the installation of a Facebook headquarters in Calumet Heights despite the fact that only “coastal” folks know what we are doing. It is my firm intention to bring back a rejuvenated baseball culture to the south side of Chicago and find the next Sammy Sosa to bring t—(aide whispers in ears)—excuse me, the next Frank Thomas to bring to the generation of young baseball fans that will become our next group of investors.

3. I understand that the Derek Jeter experiment in Miami did not go quite according to plan. But I hope you all here understand that no, baseball owners do not need to be regulated in quite the same way that JACK over at TWITTER needed to be, that we live in a privileged moment where new markets can be set out to transform existing networks into the productive communities we seek to unfurl. And it is with this note that I am proud to announce a partnership with Wahlburgers, Inc© which wi– 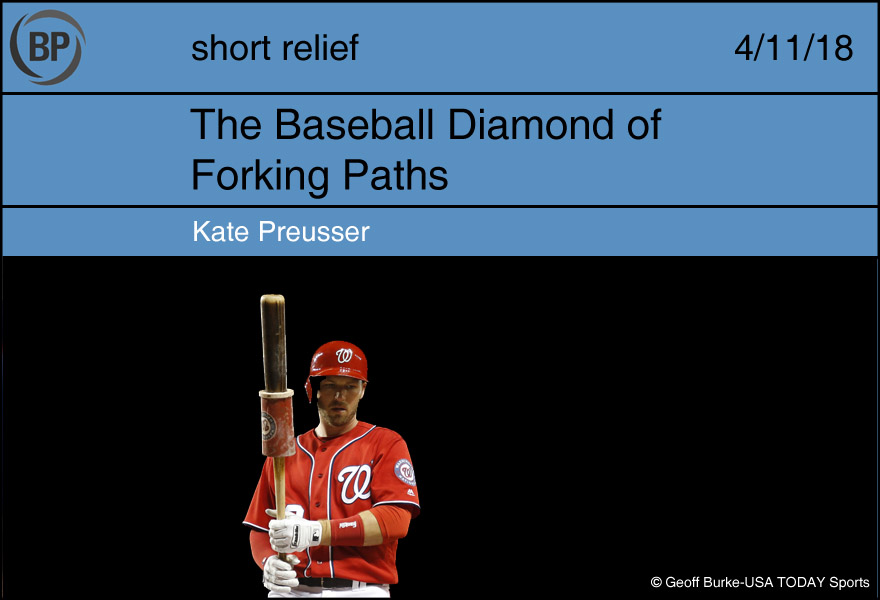 My final living grandparent passed away this week; I wrote about him before in these digital pages, here, a goodbye before the goodbye. There is nothing easy about death, but having time to say goodbye, being able to pay tribute, to take out the good china one last time–all these things can ease the pain of passage. It is something baseball is especially good at, the farewell tour. And not just in the extensive pageantry of an Ortiz or Jeter retirement; there are unspoken farewells, like when fans applaud a longtime player who has probably just taken his last at-bat before being released to the wilds of free agency; the loop players take around the stadium after the final home game of the season, tossing promotional items and balls into the crowd. Because I am a Mariners fan, this is the goodbye with which I’m most familiar: while other teams gear up for the postseason, at Safeco they toss away baseball gear. It’s the kind of goodbye that cannot help but reference the life not lived, the path not taken, the Wild Cards not played.

That isn’t the case, so much, when you live to be 99 years of age. It is hard to say a nonagenarian has anything approaching a life not lived, and while recognizing not all paths can be taken, 99 years is a fair amount of time to ramble down several. My grandfather had time to learn to build a boat he sailed around the San Francisco Bay as a teenager, and later to build and sail a warship in the Pacific; he mastered the guitar, and later, when his eyesight failed him, the ukulele. He studied physics, invented patents, and wrote long, carefully-proofread letters to then-Mariners manager Lloyd McClendon about the physics of Brad Miller’s batting stance. He taught whoever was willing to listen what he learned, wandering down these paths; he’s probably the person who first taught me how to analyze a swing plane. He didn’t do things the easy way–engineers don’t, usually–but what he did had a beginning, a middle, and a clearly demarcated end, elegant and self-contained as a mathematical proof.

It’s funny to think that, in the span of a life, playing professional baseball is a relatively small bite of it. The average major league career spans just about five-and-a-half years, or at least it did ten years ago. Players like Willie Bloomquist and Stephen Drew might not have the offensive numbers of Ortiz or Jeter, but they earn their retirement announcements, articles, well-wishes, just through their sheer ability to defy the odds, to hang in twice the time of most of their cohorts. I don’t know why my grandfather made it to 99: he did not particularly care for vegetables; he spent most of his life outside under the California and Arizona suns without sunscreen; he enjoyed golf and sailing and skiing, but in his later years mostly just watched those things on TV. He didn’t know either, and toward the end was baffled, annoyed even, that he’d outlived so many of his friends and loved ones. Like Stephen Drew, I imagine he woke up one day and realized how long it had been, so much longer than anyone might have guessed, so much longer he’d been down this path than his fellow travelers. And maybe, like Stephen Drew, he realized that of the remaining paths available to him, he wasn’t interested in following any other than the straight and easy one; the path he’d never taken before, the last one he’d ever take.