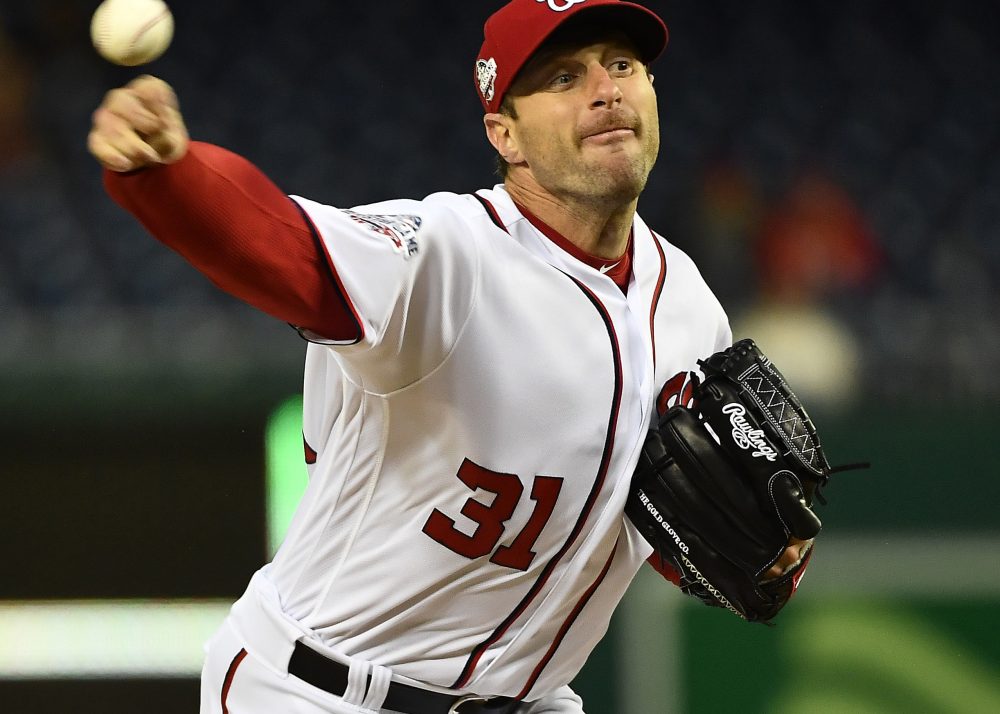 The violent delivery. The growled curses. The appearance of being liable to foam at the mouth at any given moment. Max Scherzer is terrifying.

There aren’t many pitchers who give the impression that, if the urge struck them, they could decapitate a batter with a particularly nasty slider. Scherzer is one of them. He seems to want to do more than get you out. He seems to want to embarass you and cause your blood to seep from your pores.

He didn’t quite invoke black magic on Monday. But damn was he good.

Not only did Scherzer carve the Braves up in a complete-game effort, he even stole a base.

There’s nothing Scherzer can’t do, apparently. He’s simply on a higher plane of existence. Maybe that’s why he’s always so angry on the mound, because he resents us mere mortals. We’re an affront to his existence.

Please forgive us, Max. We don’t mean anything by it. We just want to keep watching you make hitters look like incompetent fools.

It’s mandatory that we use #PitchersWhoRake here.

And seriously, that was a bomb. Yes, it’s Coors Field. But that’s a second-deck dinger from a pitcher who apparently swings like Carlos Gonzalez.

Things are not going well for the Mariners. They were being no-hit by Jakob Junis until Daniel Vogelbach of all people broke it up with an infield single. Of course, Seattle was losing by nine at that point.

It’s no surprise that Taylor Motter wound up pitching in this one. It’s surprising that he struck someone out.

Paulo Orlando may want a day or five off.

Greg Holland hasn’t had any spring training this year. He signed with the Cardinals on Opening Day after a long fruitless offseason. It was a match that always made sense, given St. Louis’ lack of a closer. But the signing afforded Holland little time to tune up. He made his debut as a Card on Monday, and, well, it wasn’t great.

Holland couldn’t find the plate. He walked his first two batters, and then Eric Sogard bunted them over. Second and third, one out. Mike Matheny, upon seeing his new closer not be able to throw strikes in a tied extra inning game, decided to intentionally walk Manny Pina to load the bases.

And, well, after walking Orlando Arcia, Holland had some ‘splainin’ to do:

You’d think people would know not to run on Yoenis Cespedes by now.

Braxton Lee is relatively new around here. Maybe we give him a pass. Maybe we have a sympathetic moment in knowing that pretty much every player on the Marlins is playing for their lives right now. A desolate roster means playing time to anyone who shows themselves to be moderately worthy of it.

Poor kid. He had his whole life ahead of him.

Start your day with a look at the surprisingly hot Pirates as they take on the Cubs at 2:20 Eastern. It’ll be Ivan Nova and Tyler Chatwood going at it, and while that may not sound like the sexiest matchup in the world, it’ll do just fine. Trust us, okay?

And look, we know you’ve had enough Yankees-Red Sox to last a lifetime. We get it. You’re exhausted. There’s more to life than Yankees-Red Sox. There’s good friends, family, and freshly baked pie. There’s also a Luis Severino-Chris Sale pitching duel in the cards here. Yeah, you can quit anytime you want, don’t worry. Just one more hit. It’ll be okay.

Once you’ve thoroughly cleansed yourself of that, check out some interleague action as the Dodgers try to finally get their bats going against Sean Manaea and the A’s.