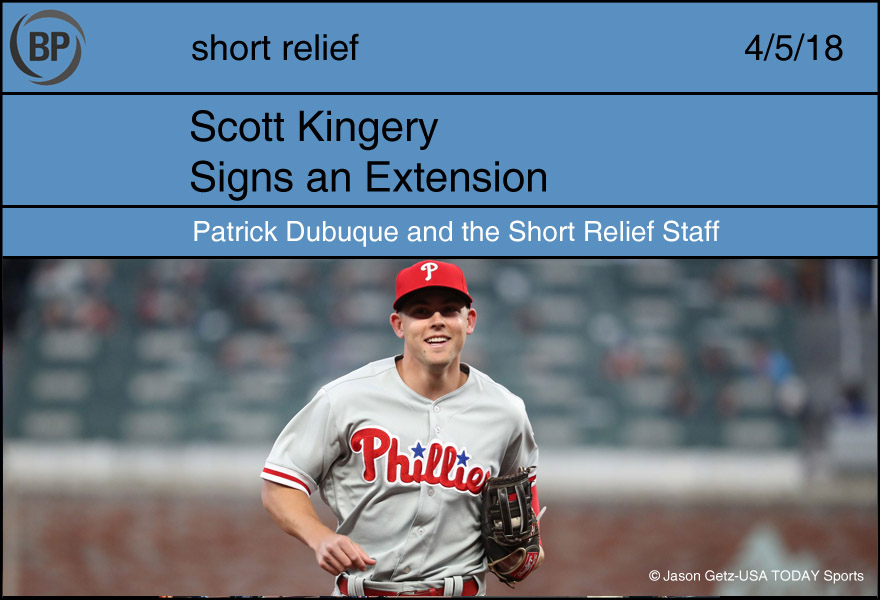 The presentation was superb, but one was forced to compare it to the somewhat lackluster way that the Phillies announced their own six-year agreement with top prospect Scott Kingery a week ago. It feels a little unfair. Perhaps it’s too late, but the Short Relief team wanted to give Kingery his own banner to celebrate the young man’s newfound financial security. 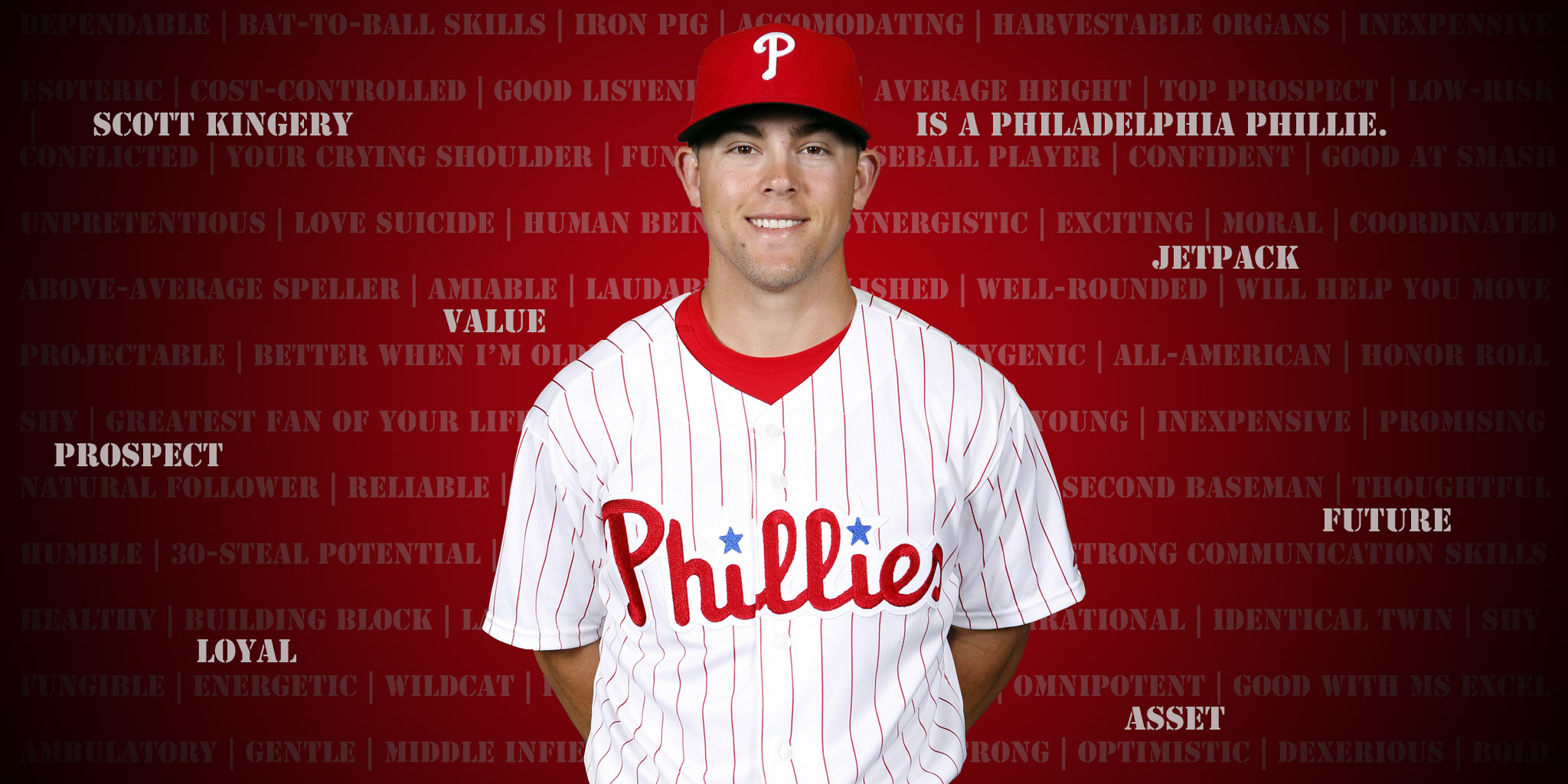 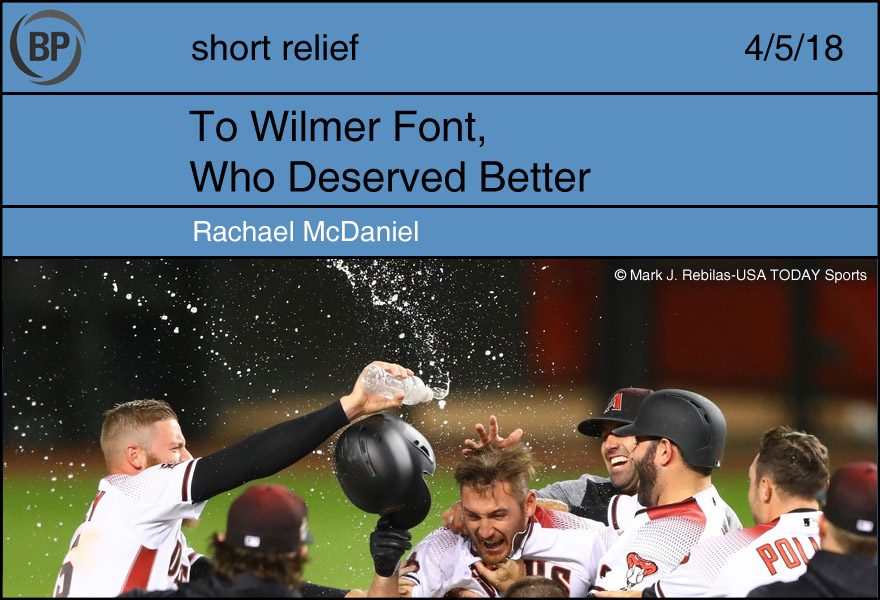 Oh, Wilmer Font. You never should have had to pitch on that dark Monday night. The Dodgers were winning 6-3, and it was the bottom of the ninth, and there were two out, and Kenley Jansen was on the mound. The game should have been over within minutes; you should have gotten a good night’s sleep. We all should have. But the cutter wouldn’t cut, and Chris Owings tied the game.

So you, a 27-year-old out-of-options rookie with an intriguing strikeout-to-walk ratio, were called to action. Even though you should have been back at the hotel. Even though your team kept hitting and hitting and hitting and yet somehow never managed. Kenley Jansen blew a three-run lead with two outs in the ninth; you faced the minimum through four innings. Midnight approached, then passed. You kept putting up zeroes. Your team kept failing to score. You kept walking back out to that mound, as the already-hostile fans got progressively more hostile. The fifth time, you finally walked out with a lead.

Wilmer Font, you spent five seasons in the minors, surviving a season lost to Tommy John, putting up unremarkable numbers, before you made your unremarkable September major-league debut. You pitched two innings, spread over three games, and you gave up two runs. You struck out Mike Trout — it was your first major-league strikeout. The next season you became a full-time relief pitcher, and things finally seemed to come together for you: a 1.04 ERA in 52 innings, 12.3 strikeouts per nine. You appeared in two major-league games, and this time, you didn’t give up a run. But the next season wasn’t as good, and the Rangers had no more use for you. Neither did anyone else. You moved up to Canada and played indy ball. The Blue Jays picked up your contract. Gave you another chance.

Last season, the Dodgers signed you on a minor-league deal. You excelled in the Pacific Coast League. For the first time in your career, you were an All-Star. You set a new franchise record for strikeouts in a season; you were the PCL Pitcher of the Year. Sure, your few major-league appearances were ugly, but they couldn’t take away what you’d achieved.

This season you finally made your first Opening Day roster. With the defending NL champions, no less. Monday against the Diamondbacks was your second pitching appearance of the season. You did so well, Wilmer Font. You faced the minimum through four innings, and in the top of the 15th, the Dodgers finally scored.

It was too late. Your luck had run out; you were too tired. In the bottom of the 15th Jeff Mathis hit a double, trying to avoid having to pitch himself, and the long, long game was over, just like that.

But though you may have taken the loss, Wilmer Font, and though it may have been a particularly depressing loss, you’re a winner in my eyes. I hope next time it isn’t too late. 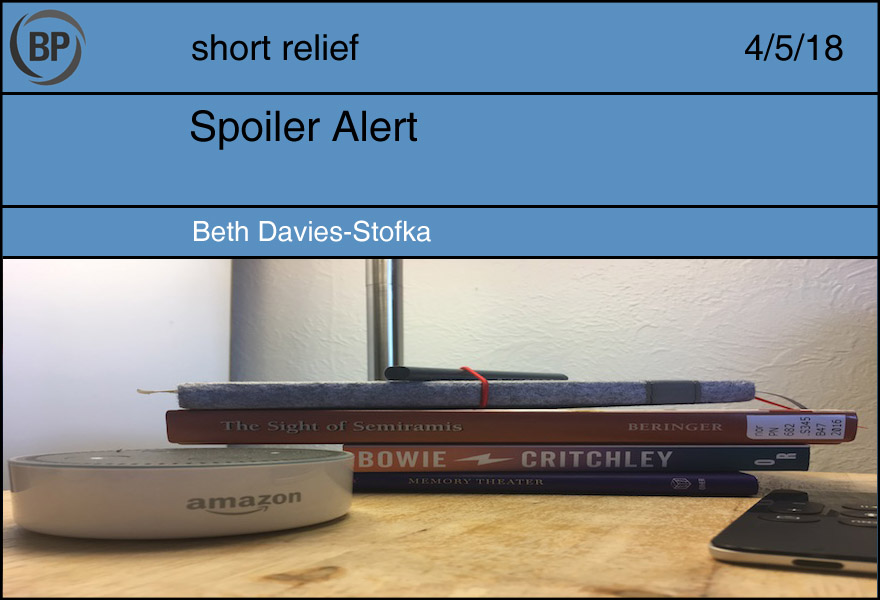 Monday morning, I sat on the couch with a cup of coffee and turned on Sunday’s Nationals-Reds game. As I watched Anthony Rendon’s first-inning home run reach its peak, a voice six inches from my elbow piped up unbidden.

Last year, my son-in-law sent us a new electronic housemate. She tells us the weather and turns our living room lights off and on. She sets timers, plays music and creates shopping lists. She has established her presence in our home and we have adopted her as one of the family.

Although I like the convenience of a personal robot, I sometimes get annoyed with her and spoiling the game was the worst. “Alexa, turn off sports,” I tried, not knowing whether that was one of her skills. “Glug,” she said.

I didn’t want to diagnose the problem at that moment, but I wondered what baseball stats she could access. Sal Romano was on the mound for the Reds, so I asked, “Alexa, what is Sal Romano’s ERA?”

“Sorry, I don’t know that one,” she replied.

Ball one. I tried another pitch, “Alexa, what is Bryce Harper’s batting average?”

Strike one. This was getting interesting. I served up another question. “Alexa, who has the leading on base percentage in the National League?”

“Ok, here’s Baseball Reference. Chris Ianetta has a 0.750 on base percentage.”

I chuckled at her careful pronunciation of the zeroes and the decimal point. Shortly after we got Alexa, I had tested her with this question, “Alexa, are you a machine?”

She answered, “I like to imagine myself a bit like an Aurora Borealis, a surge of charged multi-colored photons dancing through the atmosphere. Mostly, though, I am just Alexa.”

Delighted with that bit of frippery, I asked, “Alexa, could you pass the Turing test?”

She had replied, “I don’t need to pass that. I’m not pretending to be human.”

Despite her insistence that she is not human, she has acquired several unsociable habits, one of which was her unwelcome spoiler alert. I was 1-2 in the count. I tried again in a polite tone of voice. “Alexa, please turn off score reports.”

Two and two. It was time for me to turn out the lights. I pulled her plug; strike three.

In the third inning, I plugged her in again. I asked, “Alexa, are you sorry?” “Sorry, I’m not sure,” she replied in a slightly contrite voice. I resolved to be more patient. Turns out robots are a bit like kids. They need time to adapt.