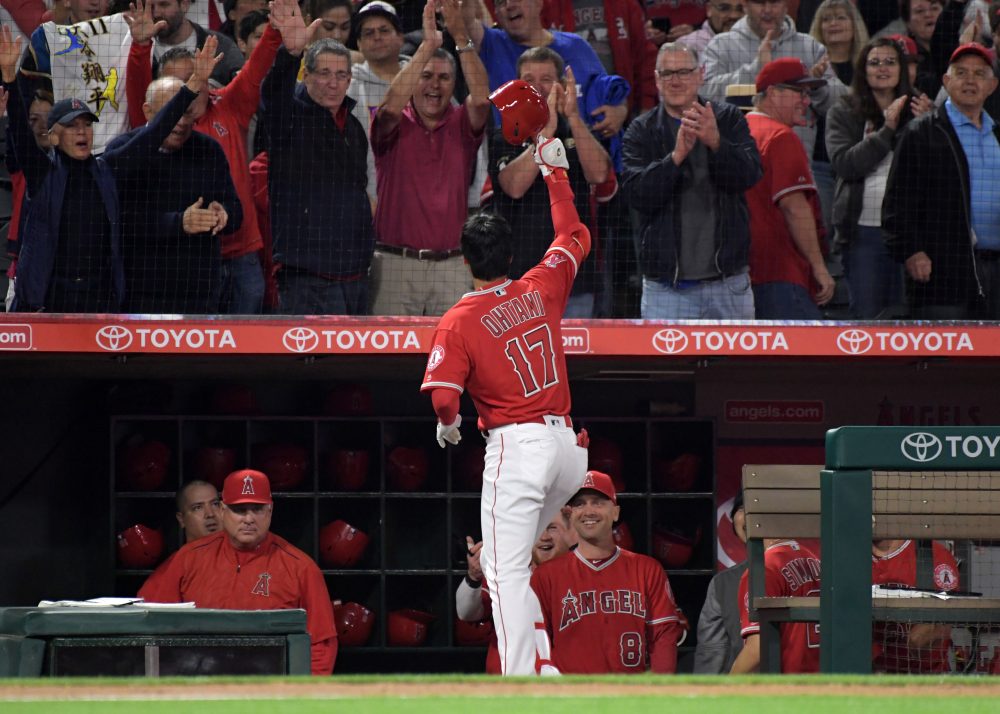 The Los Angeles Angels hit five home runs in a 13-2 blitz of Cleveland on Tuesday night, including one by semipro meterologist Mike Trout. But the Angels have a new player who appears capable of eclipsing some of the noteworthy deeds that Trout does. Yes, Zack Cozart is nice, but I’m talking about Shohei Ohtani, the 23-year-old two-way studmuffin. How do you say “wunderkind” in Japanese? Apparently, it’s tensaiji, which is “child prodigy.” Ohtani, a free agent from Japan who picked up his first MLB victory Sunday as a pitcher, picked up his first MLB dinger as a DH against right-hander Josh Tomlin. In the bottom of the first, Ohtani got a 74 mph hanging rug and he beat the dust out of it. Even better than the drive was how Ohtani reacted to the collective cold shoulder the Angels bench gave him upon his return.

Not only did Ohtani amusingly cheer himself, but he also grabbed Ian Kinsler from the crowd and force-hugged him, prompting the rest of the Angels to mob Ohtani with an, “Oh, we were just pretending, new guy!” embrace. Hey, this whole two-way experiment just might work after all. Even if he regresses some, Ohtani packing so much pitching and hitting into one package has spawned some quirky factoids:

Before Ohtani, the last rookie with 3+ hits and 1+ wins in his team’s first six games of a season was Dutch Stryker of the 1924 Boston Braves.

More on Ohtani, because why else do we do this?

They just interviewed him on TV and asked him what he’s going to say to Ohtani. With a straight face, he was just like

As a reward for doing so well, Ohtani will be back in the lineup Wednesday against Corey Kluber. Welcome to the majors, kid!

Home Runs Hit Here
Football coach Buddy Ryan once famously complained about receiver Cris Carter: “All he does is catch touchdown passes.” Well, if you trade touchdowns for home runs, some batting coach is liable to say the same about Christian Villanueva of the San Diego Padres. He hit three homers in an 8-4 victory against the Rockies at Petco Park, and none of them were cheapies:

Se fue indeed. Villanueva was born in Mexico, so if this works out with the Padres and all he does is hit home runs, he’s going to be muy popular on muchos levels.

In MLB history, only Bobby Estalella and Jarrett Parker had three-homer games in their first 14 games in the majors. Even further for Villanueva, he hit four homers in 12 games during a cup of coffee with the Friars in 2017. He went 0 for 4 on Saturday in his first appearance of 2018, but that still means (if you’re adding at home), he’s got seven home runs in 14 games.

Nearly 27 years old, Villanueva is six years removed from being ranked as the No. 100 MLB prospect by Baseball America. That was with the Rangers organization, not long before they moved him with Kyle Hendricks to the Cubs for Ryan Dempster. (Oh, good grief, that trade could still get worse for the Rangers?) He was blocked by Adrian Beltre in Texas, and by Kris Bryant in Chicago, so we’ll see if the Padres will give Villanueva more opportunities in front of Chase Headley. (Seems more likely, doesn’t it?)

That’s A Fact About Back-To-Back Jacks
The Brewers did an amazingly cool thing against the Cardinals at Miller Park. Christian Yelich hit a tying home run in the ninth against Dominic Leone and, on the next pitch, Ryan Braun also went downtown to win the game. Pics or it didn’t happen:

What makes the ending unique was how it ties in with what happened at the start of the game: Cardinals batspersons Dexter Fowler and Tommy Pham, over the course of three pitches, each hit a home run. This marks the first game in major-league history that started and ended with back-to-back homers. How about that, as Mel Allen would put it.

“You see the strangest things in this game,” Fowler said. “That’s why you keep playing it.”

If you want this Aaron Judge poster (I want a gigantic gavel, or at least some “Judgement Boxes” for quality storage), but if you want a poster, you have to tell these people.

Keep Calm And Panik
Well, break up the San Francisco Giants. Not because they won again—in fact they fell 6-4 to the Mariners at AT&T Park. But they actually scored some runs without Joe Panik having anything to do with it. Evan Longoria hit his first dong as a Giant (a two-run blast), and Austin Jackson drove in a run as well. Those incidents were the first all season where the Giants scored without Panik having to hit a solo home run. Remember his efforts against Clayton Kershaw on Opening Day, and Kenley Jansen in Game 2? Funny thing: Before his teammates finally joined in, Panik put the Giants on the board with a solo homer in the fourth. That set a record.

The Giants are the first team in @MLB history to score their first three runs of a season via one player (@JoePanik) hitting three HR. pic.twitter.com/h7RuXyvXJt

Defensive Play Of The Day
How does this by Rangers third baseman Adrian Beltre grab you? How does it grab Jake Smolinski, for that matter?

As for the umpires, they were asked why Smolinski wasn’t allowed home and their answer was: He wouldn’t have made it even if Beltre didn’t get all gropey. Rather than bolt for the plate, Smolinski should have tried to touch Beltre’s head. Everyone knows that’s his weak spot.