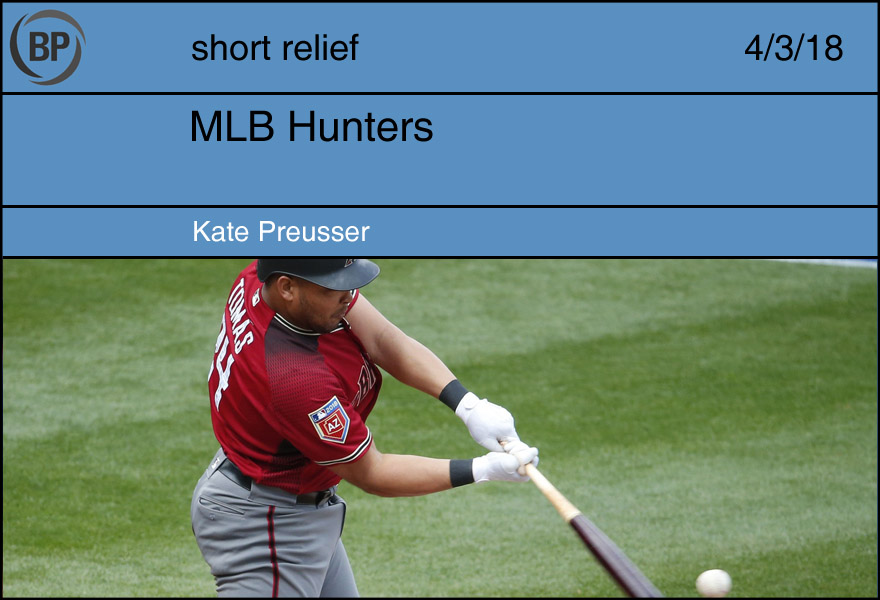 Taylor, a marketing manager, and Lindsey, who designs high-end clothing for dogs, are on the hunt for their first MLB player. Taylor likes the classics: clean lines, stirrup socks, and OBP for days. Lindsey, who has a taste for luxury, wants something modern, with a high launch angle the couple can have their friends over to admire. It will be the job of their agent Scott to find the couple a player who blends both their styles, while keeping within their million-dollar budget.

SCOTT: So the good news is, it’s kind of a buyer’s market right now, lots of stock, especially if you don’t mind a player who’s a little bit of a fixer-upper.

SCOTT: Okay, okay, Well I’ve lined up a great player for you to see. Lindsey, I think you’ll really like this one. Just 27, so almost new construction, and hit 31 home runs in 2016. [Dramatically opens door on a large, light-filled room] I call this one “Casa Yasmany.”

LINDSEY: Ooooooh. I mean, I’d want to change these paint colors, obviously, like what even is that, turquoise? But I love it, I really do. It has that grand entrance I wanted.

TAYLOR, testing a wall gingerly: I don’t know, I mean, I agree it looks great, but this defense seems like it has some structural damage? How much did you say this one costs?

SCOTT: You know, let’s just move on. I think you’ll really like this next one. A little older but has some of that quirky charm you like, Taylor.

SCOTT, more loudly: This one is in a great neighborhood, Jarrett Parker, did you say planned on having kids? It doesn’t matter, the schools are great, low crime, almost 400 MLB plate appearances!

SCOTT: Oh, that. That’s just 2017 San Francisco Giants, common problem in this area, I can give you the name of a crew to call.

TAYLOR: That doesn’t seem like the kind of smell that comes out.

SCOTT: To be honest, it doesn’t. Okay, I have one more to show you, a little older but a great value, nice blank canvas for you to put your own stamp on. Great bones, nice solid foundation, classic catcher style, classic catcher name: Carlos Perez.

LINDSEY: Oooh, and in LA too, you’d expect the price to be much higher.

BRIAN SNITKER appears, brandishing a bat. I WARNED YOU, BORAS, KEEP OFF MY PROPERTY.

Postscript voiceover: After weighing all their options, Taylor and Lindsey have decided their search for the perfect player isn’t over yet. “It’s a long season,” says Lindsey, bedazzling a dog-sized smoking jacket. “We’ll be ready when the right player comes along,” adds Taylor, stirring up a batch of his home-brew Worcestershire sauce. “That bottom of the Cleveland lineup can’t hold up all season. We’ll be ready.” 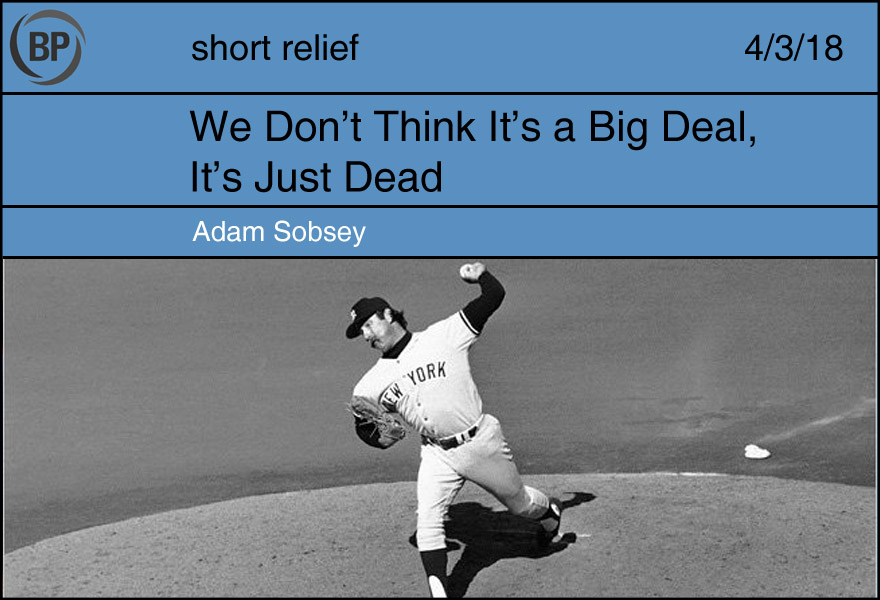 SPARKY LYLE: Hi, Josh, I heard you had a dead arm, so I just wanted to reach out. You know, since you can’t because of your dead HA HA HA HA HA. [Pause.] Hello?

DONALDSON: I just said that.

LYLE: In all seriousness, I just wanted to let you know you’ll be OK. Let me quote from a book about me.

DONALDSON: You mean the one you wrote?

LYLE: No, it’s by Bill Lee. The Wrong Stuff.

LYLE: Read the book, Josh: “Lyle used to get a sore arm once every year. It was voluntarily self-inflicted every spring training. During his first few days in camp, he would throw as hard as he could, allowing himself to break down the adhesions in his arm. That left wing would get so sore he’d be unable to pick up an empty glass with it. After a few days, the soreness would disappear, and he would be ready to pitch almost every day.”

DONALDSON: Are you saying I should have thrown harder in spring training?

LYLE: It’s okay. There are other ways to be a man. I’m aggressive on the field but gentle off it. I’ll walk 10 hours in the mountains of New Hampshire and take 160 photos of foliage to get 10 good slides. And I build slot cars—12-volt models—and race them. And I’ll photograph my son at the Bronx Zoo. Not my book. The actual Bronx Zoo.

DONALDSON: I don’t have a son.

LYLE: But the real frustration of my life is that I love music and can’t play any instrument.

DONALDSON: [thoughtful pause] Now that you put it that way.

LYLE: I play a great air guitar, but even that skill is fading.

DONALDSON: It’s not that hard, I do it.

LYLE: Except now, when your arm is dead, right?

LYLE: Even after your arm’s better, though, “2010 was the first year that could plausibly be said to contain no rock music. Now when the very last guitarist forgets the chords to ‘Smoke on the Water,’ will I actually weep? I don’t think quite. What I will miss is that rock and roll was that good a participatory ritual. You could join in rock music at whatever your level was, including air guitar, and the world will spend years searching the internet in vain for something like it. There shall never be air laptop.” [*]

DONALDSON: I don’t know what to think anymore. I’m so sad.

LYLE: You should try sitting on cakes.

LYLE: My trademark. When fans send birthday cakes to your teammates, you open them first, sit on them, then deliver them.

DONALDSON: [pause] I guess Pearce’s thirty-fifth is next week.

LYLE: Great, try it. One thing, though, Josh, very important.

LYLE: Before you sit on the cake?

LYLE: Take off your pants first.

You need to be logged in to comment. Login or Subscribe
Llarry
On the back of Sparky's 1974 card, the illustrated "fun fact" is that "Sparky likes to eat birthday cake". You know, I find it hard to criticize the Topps exec who went, "He does what? No, we're not going to print that on a baseball card."
Reply to Llarry