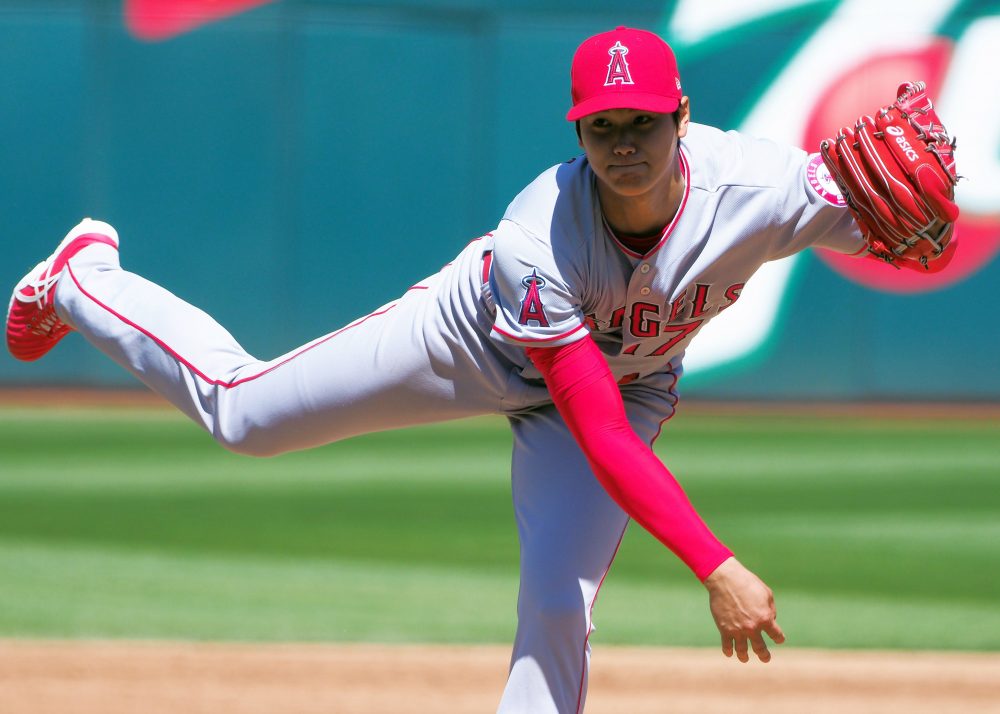 The big story was the pitching debut of Angels rookie sensation Shohei Ohtani. How big, you ask? So big, the Athletics issued 240 credentials for Japanese media members and a big swath of Japan woke up at 5:05 a.m. just to watch Ohtani pitch Sunday.

Of course there were questions heading into the game because Ohtani’s spring wasn’t anything to write home about, but if you’ve been a fan of baseball long enough you know that spring numbers usually don’t mean much once the regular season begins. And yet, his Cactus League results were so bad, there were even whispers about Ohtani possibly starting the regular season down in the minors.

Ohtani quickly shut up any naysayers in his first outing.

Just three days after Ohtani made his debut as a hitter, he threw his first regular-season pitch, a strike to Marcus Semien. Ohtani later set down the A’s in order in the first, and his fastball velocity was as follows: 96, 98, 99, 99, 99, 98 and 100 mph. He was throwing gas. In fact, according to Daren Willman of Baseball Savant, Ohtani threw 39 fastballs which averaged 97.3 mph which means he threw the ball harder in his debut than Noah Syndergaard did in his debut.

The next inning Ohtani ran into trouble and, after surrendering back-to-back singles to Matt Joyce and Stephen Piscotty, he threw one bad pitch—a slider that caught too much of the plate—to Matt Chapman who took him deep to center for a three-run home run. It would be Ohtani’s only blemish. 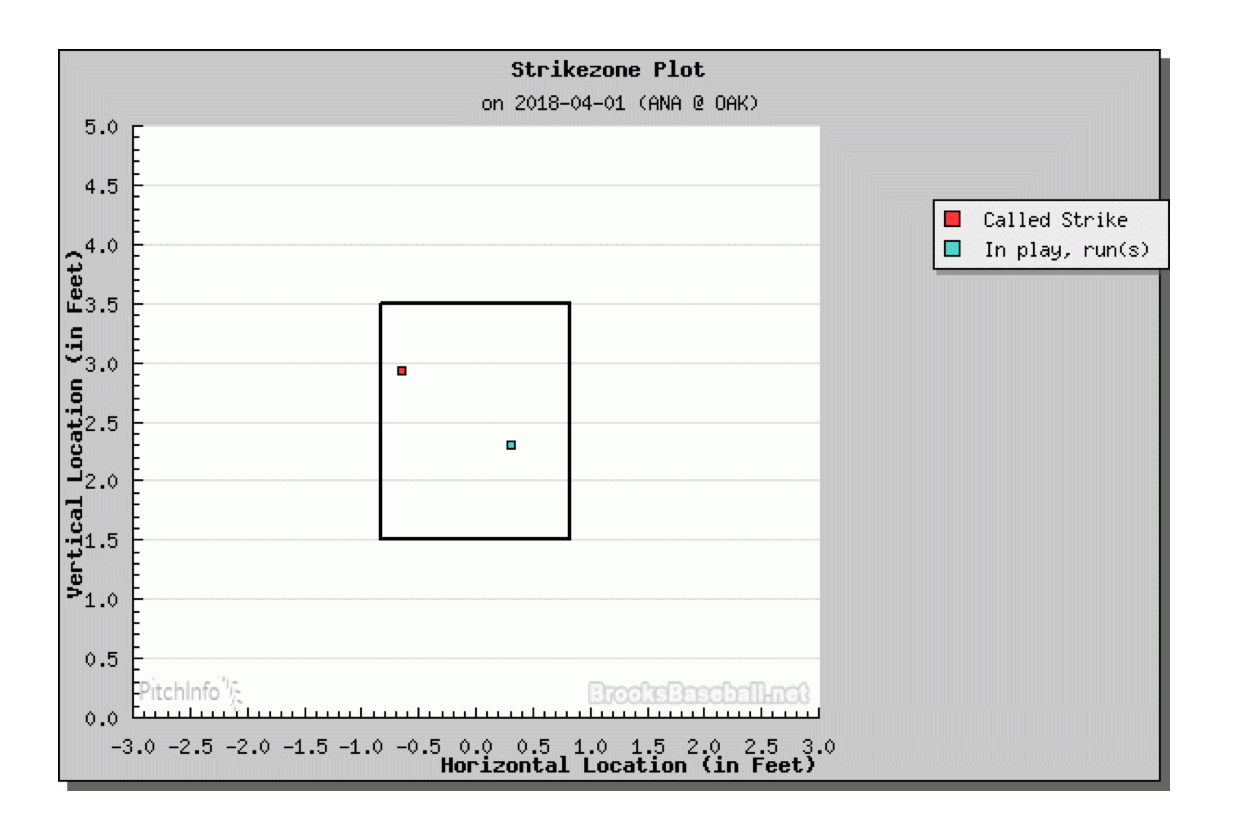 After that, Ohtani settled down nicely, retiring 14 of his next 15 batters; he walked Joyce in the fourth and with Joyce on first, got Chapman to strike out swinging to end the inning. Ohtani lasted six innings, only giving up the three hits in the second, along with those three runs. He walked a batter and struck out six. Ohtani threw 92 pitches (63 strikes) before skipper Mike Scioscia replaced him with reliever Cam Bedrosian.

Ohtani told reporters that he was satisfied with his outing but happier that his team got the win.

Ohtani’s catcher, Martin Maldonado, had a theory as to why Ohtani was struggling in the spring. He told reporters that because the air is dry in Arizona, it’s difficult for some pitchers to grip certain pitches like curveballs and splitters. That would explain a lot and if Ohtani pitches well in his next outing; the people who wanted to demote him to start the season will feel pretty silly.

On Friday night, Masahiro Tanaka made his 2018 debut against the Blue Jays. A year ago against Tampa, Tanaka’s first outing was very brief and very bad. He lasted only 2 2/3 innings while surrendering seven runs on eight hits with two of those hits leaving the ballpark. This season against the Blue Jays, it was a much different story. Tanaka lasted six innings and gave up one run on three hits. That one run was on a solo shot by Randal Grichuk. Tanaka also struck out eight and walked one.

Andrew Cashner’s Orioles debut didn’t go as well as he would have liked Saturday. He gave up five runs (four earned) and six hits, including three home runs in five innings of work. He also walked two and struck out five. On the other side of the diamond, the Twins came within four outs of a combined no-hitter and won 6-2.

This first weekend of baseball produced a bunch of extra-inning games, which is amusing considering the amount of time everyone spent debating pace of play during the offseason. If MLB implemented the extra inning rule that MiLB is starting this season, we would have missed:

• Miami walking off in the 17th inning against the Cubs.

• The Pirates beating the Tigers in 13 innings.

• The Phillies winning in 11 innings against the Braves.

The Blue Jays got their win of the season Saturday thanks to a Dellin Betances meltdown in the eighth inning. Here’s Yangervis Solarte with his first home run. It was a big one:

Along with extra innings, grand slams were in fashion.

• The Indians beat the Mariners on Saturday thanks to the bat of Yonder Alonso, who hit a grand slam in the first inning.

• Brian Goodwin also hit a grand slam in the Nationals 13-5 win against the Reds. Let him explain how:

After being shut down by the Giants in their first two games, the Dodgers finally scored two runs in the bottom of the first Saturday to end their scoring drought. The Panik was finally over in Los Angeles. L.A. won 5-0.

Ichiro made his triumphant return to Seattle and, one weekend in, he already has a web gem. Remember those? He straight up robbed Jose Ramirez of his first home run of the season. Those are some hops. Not bad for a 44-year-old.

The Yankees, Pirates and Angels have their home openers Monday afternoon. The Yankees face the Rays in the Bronx and there’s snow in the forecast, so the status of the game is questionable. If it happens, Jordan Montgomery will start against Austin Pruitt. (1:05 p.m. ET)

The Pirates host the Twins at PNC Park and the newly acquired Lance Lynn will make his Twins debut against Jameson Taillon (1:05 p.m. ET)

Monday is Matt Harvey Day in Queens. He faces Ben Lively of the Phillies. (7:05 p.m. ET)

On Monday night, 44-year-old Bartolo Colon, who was just released by the Rangers on March 24 and re-signed a week ago, will make his season debut at Oakland. The 44-year-old is matched up against Andrew Triggs. (10:05 p.m. ET)