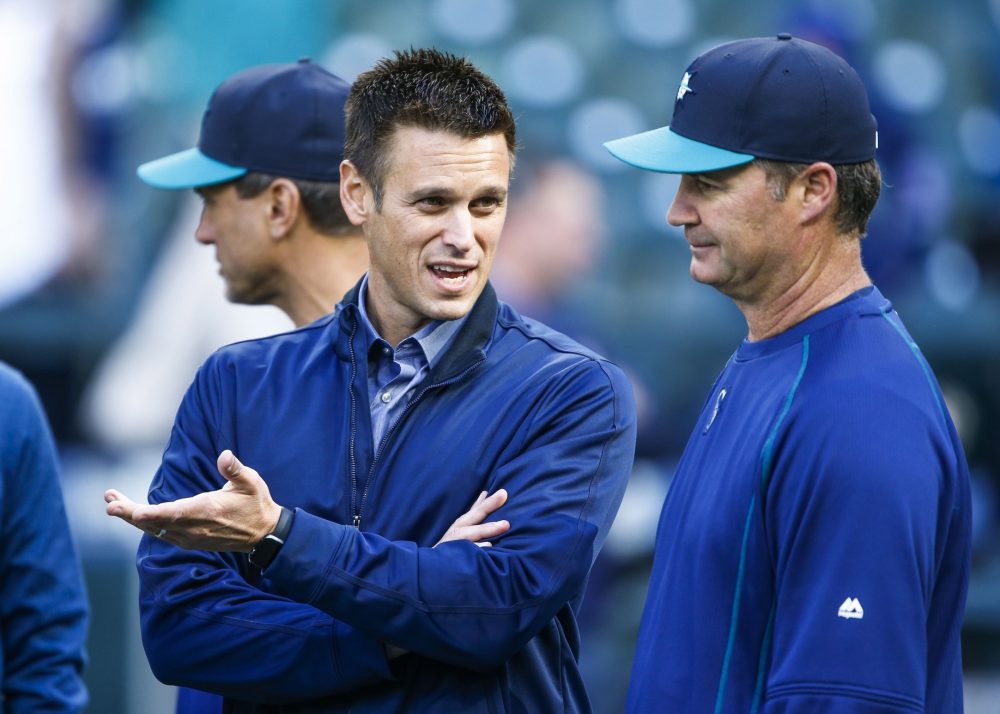 A while back, the prolific German mathematician/game designer Reiner Knizia created a card game called Lost Cities. It’s actually a fairly simple two-player deal, so much that you can actually reproduce it (minus the colorful art) with two decks of playing cards and a permanent marker. You can also own it for 14 bucks, which feels about right. They’re nice looking cards.

The rules are equally simple: a deck has five suits (or colors) of cards numbered 2-10, along with three “handshake” cards. Each player is dealt eight cards. On their turn, a player may do one of two things: play a card in front of them, or discard to the appropriate center pile. Then, they draw back up to eight, either from the top of the deck or by taking the top card on one of the discard piles. 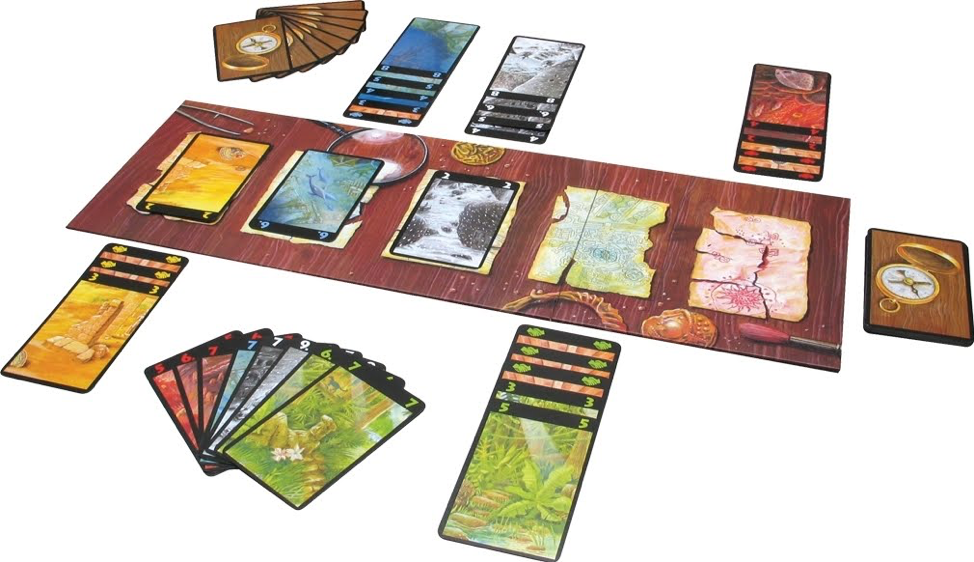 The only other restriction is that a player must play the cards in front of them, by suit, in ascending order. For example, if you’ve already played the yellow 3 card, you cannot play the yellow 2. Once you commit, there’s no going back. That’s it.

Once there are no more cards to draw, each player adds up the numbers of each color in front of them and subtracts 20. If you don’t lay any cards of one color down, there’s no subtraction, no risk. Each handshake card multiplies the final score, positive or negative. Basically, each trip you “start” puts you in the hole, and you have to manage how much you’re willing to risk when you make that initial investment.

It’s a very simple game, a mathematician’s game: each turn you look at your options and calculate the one that offers the greatest reward versus risk. But there’s one tiny element that actually defines the game, makes it so brilliant, and so stressful: Unlike every other game ever, you have to play first and draw second. Even veterans will constantly be reaching for the draw pile when their turn starts, looking for one more option before making a commitment. This is because Lost Cities totally inverts the standard flow of board games. Most games are about empowerment—collecting resources to improve your infrastructure to collect more resources, until step X: profit.

This is what building a baseball team often feels like—collect players to trade for resources, or wins. Excitement.

But in Lost Cities, each turn is suffering. Because each card you play actually reduces your flexibility, by cutting off possibilities for later, or requires discarding a card that may (or sometimes, because it’s the lesser evil, certainly will) help your opponent. Even when you’re winning, it feels like you’re losing, because you’re constantly making compromises, whittling away opportunities, tightening your own noose. After stalling as long as you can, you’re forced to commit to a strategy, only to learn too late that the draw pile had the exact opposite future in mind.

The Seattle Mariners have lived a fairly cursed existence. One of the unspoken truths of baseball is that all good teams are good by design; all bad teams are both bad and unlucky. For all the transactional sins they’ve committed over the past couple of years (hi, Chris Taylor and Luiz Gohara!) they’ve also run into terrible misfortune, both internally and externally. All teams have their fortunes and misfortunes, of course, and no regime has ever saved its neck by appealing to fate.

Still, the fates have been cruel. Jerry Dipoto took over a decaying empire with orders to patch it together and, without much of a farm system to exhume, did so in a (to understate) creative fashion. But the cards just didn’t fall. Drew Smyly, obtained in a roundabout fashion for top prospect Luiz Gohara, saw the knife without pitching a single inning for the team. Justin Smoak just needed that eighth season of development to figure it out. The team’s best prospect, Kyle Lewis, shredded his knee in rookie-ball and still hobbles. David Phelps appeared to be a reasonable, flexible option for a team in need of flexibility; he, too, has been banished to the Sporcle quizzes of the future.

This year, the Mariners went silent on the trade front, only because there was so little left to be done; the team is in a lost endgame, most of the pieces exchanged and off the board. So much of the team’s current state is owed to the earnest decisions of earlier times. One of the early emphases the organization placed was on fly-ball pitchers, correctly discerning that the spacious dimensions of Safeco Field would make them more valuable to the Mariners than other teams. It was a good idea for four months, until all fly balls suddenly and magically became home runs. The juiced ball, as it turns out, was not the victimless crime the league tends to portray; it decimated a Mariners team building completely away from it, imagining the vast, league-leading 35 home runs of Nelson Cruz.

Last season was popularly seen as the Mariners’ last chance before the core players grew too old; the survival of Nelson Cruz and Robinson Cano in their current level of productivity was actually a pleasant surprise. And yet as the offseason began, teams like the Rays and Pirates managed to hurl themselves ahead in their race to the bottom, and suddenly, just as ill-timed as their window of contention was, the closing of it also came at the exact wrong time. Could you blame the Mariners for hesitating to dismantle when 10 other teams decided to split the proceeds?

Even so, the alternative, drydocking this increasingly leaky ship, was a formidable task. The Mariners went into the offseason with the following holes:

First base. Dipoto & Co. pounced quickly on this one, making a characteristic trade. One of the core foundational beliefs of the folks in teal is their ability to generate decent relievers, so the low cost of Emilio Pagan felt (and probably was) fair for the position-less Ryon Healy. Given the early rates on first basemen, including Mitch Moreland, this seemed like a fine use of resources, if somewhat underwhelming for a team that hasn’t had a real star first-sacker since the early days of the Richie Sexson contract. But as winter continued and Healy-like names like Logan Morrison and Lucas Duda couldn’t find work, it appeared that the team could have gotten comparable value for a comparable price, without having to give up a decent bullpen arm (see paragraph four).

Center Field. Dipoto zagged even harder this time, obtaining a second baseman to play outfield in a continuation of recent Mariner policy (Dustin Ackley, Brad Miller, and Ketel Marte all got tryouts in the grass). Again, the move itself was easily defensible; the prospects the team gave up were decent but hardly a staggering list, and Dee Gordon has, so far, employed his natural speed and taken well to his new position. Still, as last year’s starter Jarrod Dyson finally signed with another team for a third of Gordon’s contract, the wizardry felt a little needless.

Relief Pitching. This one is tough because the M’s really do believe in piecing together a bullpen, and if you’re going to invest your money in a high-risk, high-reward portfolio, the volatility of a bullpen is an easy one to bank on. Which makes the high prices paid to Juan Nicasio and (last year) Marc Rzepczynski kind of baffling. Again, each is reasonable in a vacuum, but given the fiscal constraints that the team found/put itself in, it’s hard not to wish after the fact that the team hadn’t joined into the strange expensive reliever run of December. (Again, see paragraph four.)

Starting Pitching. And this is where the house of cards falls apart. As the free agent market froze into place and many innings-eating starters were left out in the cold, the team found itself up against its own cap. It leaves the 2018 team in a perilous position: the Mariners bring back a starting rotation that unanimously failed to throw enough innings to qualify for the ERA title, and the only starter to throw more than 136 innings was its worst one. Even one major injury to an arm would cripple their postseason chances; the upper minors offer almost no one capable of stepping in. Though perhaps Alex Cobb and Jake Arrieta were pipe dreams, the Mariners could have desperately used a Lance Lynn or a Francisco Liriano or even a Trevor Cahill, and as it turned out, should have been able to afford them. They could not afford them. As it so often happens, the Mariners found themselves just one card short of what they needed.

One of the worst feelings in both baseball and board games is watching a losing game play out. Chess players alone are exempt from this. They can turn over their king, curse themselves, and then immediately go back over the moves, and the perfect information of the chess board, to see where they went wrong. It doesn’t work that way in baseball, as much as we try to do exactly that. The fog of war is everywhere; no one can predict how a swing change, or a soft salary cap, will eviscerate the best-laid plans.

So how did it go wrong for the Mariners? The obvious answer, and I believe the correct one, is that they didn’t spend enough money. The franchise payroll stands at around $160 million, far higher than usual. But the team is in a special place: This is literally it. A playoff appearance this year wouldn’t be the first step in a grand plan, as one might see with a team like the White Sox or Diamondbacks. Unless that playoff team is driven by a bizarre combination of Mike Zunino, Mitch Haniger and Dan Vogelbach, even a first hurrah will also be the final one. The team will be rebuilding next year; they’re capable of recouping their losses then, even though business never operates that way.

But assuming that we work with the constraints of the franchise as they portray them, and this shambling, flawed Wild Card semi-contender utters its death rattle in 2018: What can you blame? Isolated from their setting, and from the future, few of Dipoto’s moves are truly damning. Every contract extension has been fair, if not wildly team-friendly; the trades for major-league talent have rarely backfired completely. Only Chris Taylor for Zach Lee was really a bad trade in the moment, and that was when it was a useful shortstop for a spent former first-rounder, not an NL MVP down-ballot candidate.

I’ll end by diverting the metaphor from a game you probably never heard of to one that’s ubiquitous, in poker. In poker, it isn’t the terrible hands that are deadly. It’s easy to fold on a hand with nothing but garbage, or rebuild a team in a similar state. It’s the hand that looks pretty good, the second-best hand at the table, that can empty a wallet. In retrospect, the Mariners should have thrown it all in the moment Dipoto arrived, converted one of Robinson Cano’s solid years into a neutral value, offloaded Felix Hernandez and Kyle Seager when they had value. It’s easy to say that now. At the time, one could say that this era was one long bad beat. Nothing to be done now but sit it out, shuffle the cards, and give it another shot, with Dipoto or another leader.

And develop a couple of prospects. It’s always pretty handy to develop some prospects.