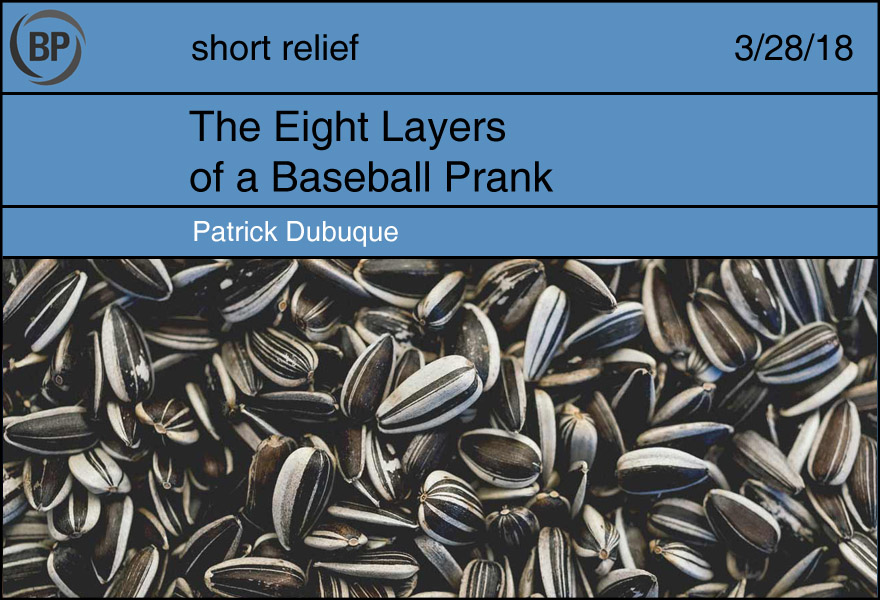 Level 1: While one man is conducting a television interview, another man pours sunflower seeds on his hat.

Level 2: While one man is conducting a television interview, another man pours sunflower seeds on his hat. The man and the people interviewing him laugh, because it is funny.

Level 3: While one man is conducting a television interview, another man pours sunflower seeds on his hat. The man and the people interviewing him laugh, because it is funny. It is funny because it is an act of dissonance: an actor with an appearance of a man who takes on the behavior of a boy, as is the case with many television sitcoms and motion pictures.

Level 4: While one man is conducting a television interview, another man pours sunflower seeds on his hat. The man and the people interviewing him laugh, because it is funny. It is funny because it is an action of dissonance: a prank, an act that would appear to be a minor transgression of social norms and conventions that ultimately reveals the bonds of teammates.

Level 5: While one man is conducting a television interview, another man pours sunflower seeds on his hat. The man pouring the seeds is funny, because even he does not know why he is pouring the seeds, or what it means. He does so because it is something, and doing something, even pouring seeds on the hat of another man, is infinitely preferable to doing nothing. After he is done pouring the seeds he disappears, reverted to his previous state of meaninglessness.

Level 6: While one man is conducting a television interview, another man pours sunflower seeds on his hat. By conducting the television interview, and engaging in the rote, cliched responses thus required, the man has converted himself in appearance to an automaton. To French philosopher Henri Bergson, laughter is created by the conflation of man and machine, in the ridiculousness of man without free will, and the sunflower seeds (and his inability to acknowledge them) underscore his lack of humanity. The man and the people interviewing him laugh, because it is funny to watch a man be reduced to less than a man.

Level 7: While one man is conducting a television interview, another man pours sunflower seeds on his hat. The man and the people interviewing him laugh, because they are the automatons.

Level 8: We laugh at the men laughing, because we, too, are automatons. 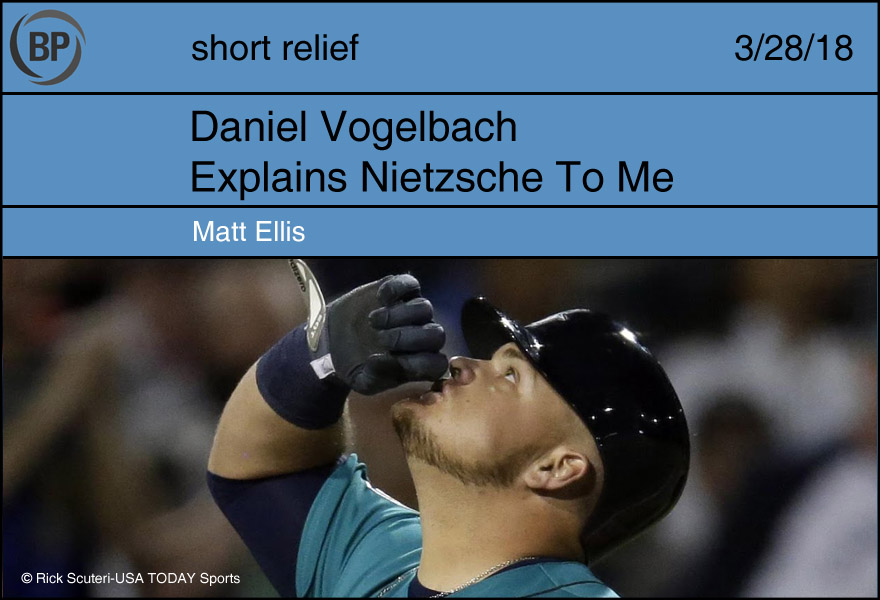 Yesterday, The Seattle Mariners beat the Colorado Rockies 5-3 in the final game of spring training. It featured a tantalizing conclusion to one of the many storylines building for the M’s: ostensible Shiny New First Baseman Daniel Vogelbach, who hit yet another colossal home run to cap off a torrid spring that saw him hit .407 with seven homers in only 54 at-bats. In one sense, it is the good story that many Mariners fans had been looking for. With a questionable starting rotation, the team needs every bit of production they can get from their bats to help soften the inevitable blow produced by a summer filled with high-scoring games. And to get it from a young, cost-controlled prospect, is a different story altogether.

It is also one we’ve heard before. First base black holes, Justin Smoak, Mike Carp, warning track power, Richie Sexson, the guy you remember because he wore a helmet in the field. The Marine Layer. Good luck hitting in that park. It will take a lot more than digging the position out of the negative-WAR pool it has spent the better part of this century in to turn the tables on the longest playoff drought in American sports, but Vogelbach putting together a competent first full season will only be a net positive for a team searching for the success which has for so long eluded them.

Tomorrow, I will watch the Seattle Mariners face Corey Kluber and the rest of the Cleveland baseball team, and I will wince as Felix Hernandez throws what’s probably, like, his thirtieth pitch of the month in a game with stakes. Then, I will read the headlines throughout the rest of the month and I will grow frustrated when the first starter to land on the DL erupts in my face before I even see a single day of May. This entire process has happened with or without my participation for 41 years, and while I’ve seen a good number of those years, there are more of them than there are of me. This year will be different of course, until it isn’t, and then it is the same again. One of these years they will put 2 and 2 together, and while it won’t be this one, it will maybe, uh, be the…next one. That is a sentence that has the benefit of being ontologically true in every utterance due to its specific temporal grounding outside time. In short, it is inexhaustible in its ability to signify what once day will be, but today is not. I’m not sure if that helps win baseball games, but it certainly helps me cope better than Doris Kearns Goodwin’s decision to Wait Till Next Year. The point, it seems, is to never stop waiting.

In October, Daniel Vogelbach will almost assuredly not be playing baseball. This sentence can be interpreted in a number of ways, both optimistic and the opposite, but instead let me tell you that it finally helped me understand what Nietzsche was talking about with his concept of eternal recurrence. Here’s his famous anecdote from The Gay Science:

What if some day or night a demon were to steal after you into your loneliest loneliness and say to you: “This life as you now live it and have lived it, you will have to live once more and innumerable times more; and there will be nothing new in it, but every pain and every joy and every thought and sigh and everything unutterably small or great in your life will have to return to you, all in the same succession and sequence–even this spider and this moonlight beneath the trees, and even this moment and I myself. The eternal hourglass of existence is turned upside down again and again, and you with it, speck of dust!” Would you not throw yourself down and gnash your teeth and curse the demon who spoke thus? Or how well disposed would you have to become to yourself and to live to crave nothing more fervently than this ultimate eternal confirmation and seal?

A lot of ink has been spilled about Nietzsche and nihilism, and regardless of the merit of those readings, well, I mean, we both read the words that immediately preceded this sentence. But I think we forget that what makes this concept so haunting is precisely the desire on behalf of the subject in question to repeat, to return, to relive, to crave nothing more fervently than this “eternal confirmation.”

In one sense, I’m not sure why I keep watching this stupid baseball team, or why others do. I think there is a legitimate desire on behalf of many Mariners fans to want to say I Told You So, and I think it operates in both a pessimistic strain as well as one optimistic. But all I know is that seven years after writing this paragraph, Friedrich Nietzsche watched a horse being flogged in the middle of the street and had a nervous breakdown, declaring himself to be the Greek god Dionysus and finally dying in a chair after losing control of the left side of his body after a series of strokes, immobilized in a chair and a blanket under the care of his sister. The rest, as they say, is history, and I’m going to be very excited when Daniel Vogelbach hits his first major league home run next week, very very excited, it will travel quite far.