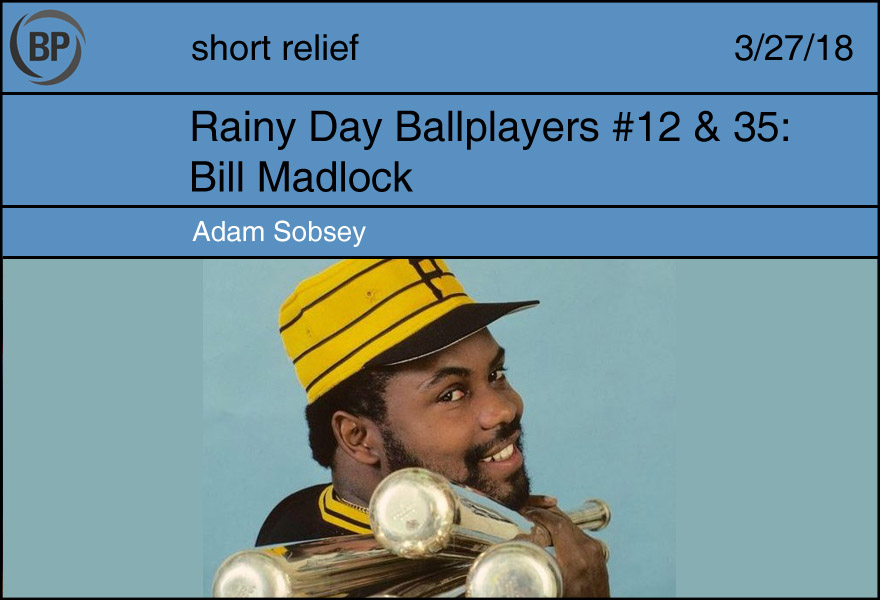 Whenever I hear the phrase “compact swing,” I think immediately of Bill Madlock. He somehow became identified with that particular piece of scout-speak—“his swing so compact it wouldn’t disturb the cobwebs in a ghost-town phone booth,” one journalist wrote—and in turn I began to identify with him. Not because I had a compact swing myself—I didn’t even play baseball—but because the very notion of such a swing appealed to me: restraint, efficiency, controlled fury.

What I also liked, though, was that when he wasn’t swinging, Madlock wasn’t controlled at all. He was nicknamed “Mad Dog” (and not just because it sounded like his last name), was ejected from 18 games over his 15-year career, and even his prevailing bio as recently as 2014 notes that “he was known for his fiery temper.” He once helped trigger a memorable brawl that involved Al Hrabosky (another “Mad”-nicknamed player) and Ted Simmons.

But at the plate, Madlock channeled his mad-doggery into that swift swing. He won four batting titles, and his midseason trade to the “We Are Family” Pittsburgh Pirates in 1979 helped propel them to the pennant and a World Series title. (Ironically, six years later, when the Pirates traded Madlock to the Los Angeles Dodgers, one of the players he was swapped for was Sid Bream, destined for infamy against none other than Pittsburgh.)

I think of Madlock oftener now because of the era of long swings in which we find ourselves. I have an almost formalist nostalgia for hitters who aren’t trying to extend, flail, and launch. My favorite hitter to watch is Daniel Murphy, whose swing I wouldn’t exactly call compact but which has in it an old-fashioned sort of containment, even modesty, that is going, going, and nearly gone from the baseball world. My favorite news in this off-season of gloom and greed is that Ichiro is back. I’m really no nostalgist, and I don’t think baseball was better back when, but its rising levels of launch angle and velocity seem gaudy and even meretricious to me. But I miss what turns inward instead of out. I miss compactness. 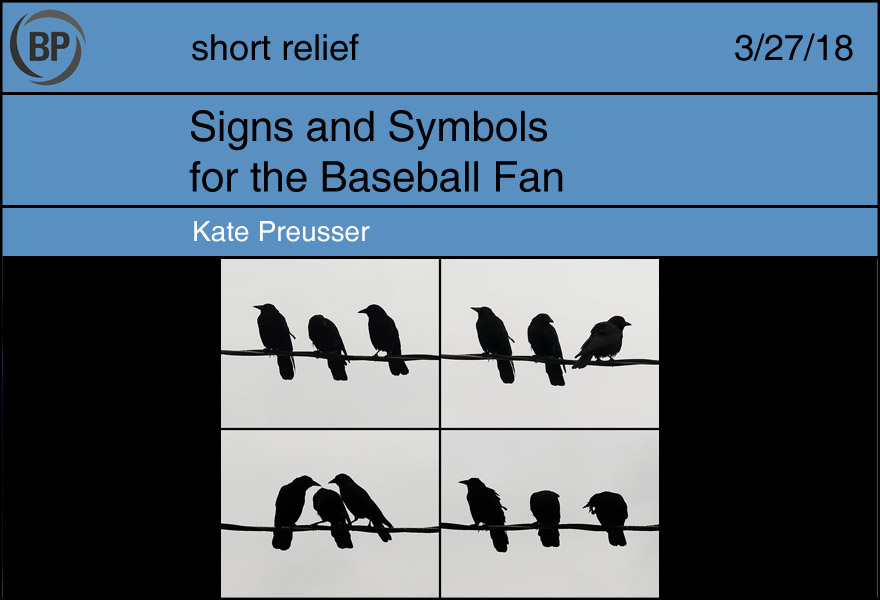 Today there was something on my passenger side floor mat; I thought it was some raffia, a fistful of straw-like grass codified by mud, everyday garden detritus. When I picked it up, however (in my bare, soft, gently perfumed hand, note to those at home NEVER DO THIS), I found I was actually cradling a tiny ribcage, a model of Noah’s half-built ark in miniature; the desiccated husk of a baby bird. A helpless, headless baby bird. Reader, I screamed.

It is very hard, when your day begins with you innocently cradling the withered hull of a formerly living creature, not to take this as an Omen. It is hard not to see this as a cosmic referendum on your immortal soul, a divine finger-wagging urging you to repent your ways, a small, sickening memento mori. Weeks should not start out like the opening salvo of a Lifetime movie called The Murderer Next Door.

Nor should baseball seasons begin with the gruesome specter of Spring Training injuries. Even if it is minor, even if it is early enough that there is still plenty of time for the player to heal without missing much of the season, there’s a certain leaden dread to seeing a key piece of your favorite team’s rotation take a comebacker off the arm, to hearing the doomcrack of ball connecting with bone, to see a runner pull up lame.

It’s a moment where you realize how stupidly fragile the human body is, this cauldron of soft meat and splintery bones and bendy parts that sometimes bend the wrong way. It makes you wonder how you navigate through a day without blowing out an ACL trying to unstick a grocery cart, you, who are 1/10th the athlete of these players. Owning a human body is a little like being handed the keys to a car that you do your best to operate, even with its hinky clutch and that noise it makes when it’s cold outside, a thing you care for as best you can, more or less, but you can’t stop the kid down the street who just got his license from sideswiping your mirror. Try as you might, you can never control every variable. You can never know who’s on the road that day.

Such is the importance of omens. Omens breathe meaning into mysteries; they offer an illusion of knowledge in the absence of any. Any baseball fan will tell you spring training doesn’t matter, but the 2018 season stretches ahead of us, as vast and unknowable as the murkiest depths of the ocean. And so we look for omens, because even if the news isn’t great, the not-knowing is worse. 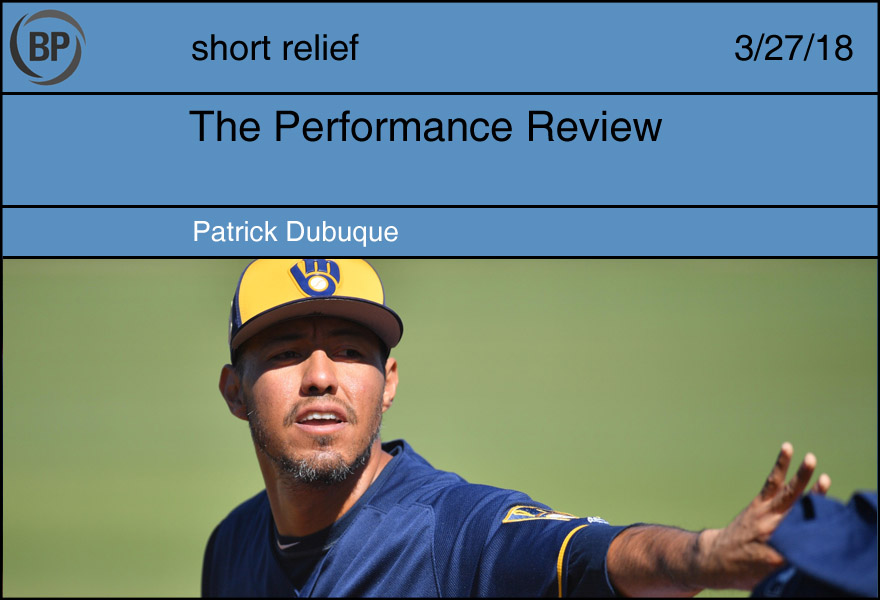 Last week, I received a very reasonable e-mail from my very reasonable (day-job) boss. The company is enacting, I believe for the first time, that corporate celebration known as the performance review. Please, it continued, provide some baselines for what you would consider to be measurable benchmarks for your responsibilities.

This is, I grant, entirely fair. And there are reasons that performance reviews are advantageous to me as well, though none of them come to mind at the moment. But there’s something about the quantification of a man’s labor that strikes me as unseemly. Not the pure distillation of capitalism in every moment of a person’s working day; I admit the necessity of my corporation of choice discerning whether it’s worth actually paying me. It’s an unfortunate side effect: the horror of having to know what one is worth.

In her book Hyperbole and a Half, Allie Brosh concludes with an examination of how shitty a person she is, by examining her examination of how shitty a person she was. (The answer: not very, by J.S. Mill’s standards; quite, if you go by Kant.) Brosh struggles with the unseemly pride she feels when conceptualizing herself as a good person, the sort who will start volunteering next week. We all do this; we generally think of ourselves as good people, just as we are good drivers and good listeners. The evidence is easy to forget, the impression we leave ourselves lingers.

The truth is that by Kant’s standards nearly all of us are terrible: we’re envious, petty, licentious, and egomaniacal, and it’s a miracle that most of us are successful in staving off most of these treacherous instincts most of the time. To the trained Christian, this is nothing more than the concept of sin; from a practical standpoint, actually comprehending such a condition is enough to send an already struggling soul into full depression. We create idealistic versions of ourselves, in part to fool others, but mostly to fool ourselves, to give ourselves something to live up to.

This is a quieter crime of the modern analytic movement. We have delivered unto baseball new KPIs, and in so doing robbed athletes of their ability to assess themselves. The virtue of the sacrifice bunt, the locker room arbitration: the ideals that baseball players erroneously, and sanely, ascribed to their value as employees have been erased. The tools to explain away the unexplainable, the 1-18 slump and the two-inning start, have vanished. Not only does everyone else know how good an employee each player is, the rest of the world does, too. How terrible it is to know.