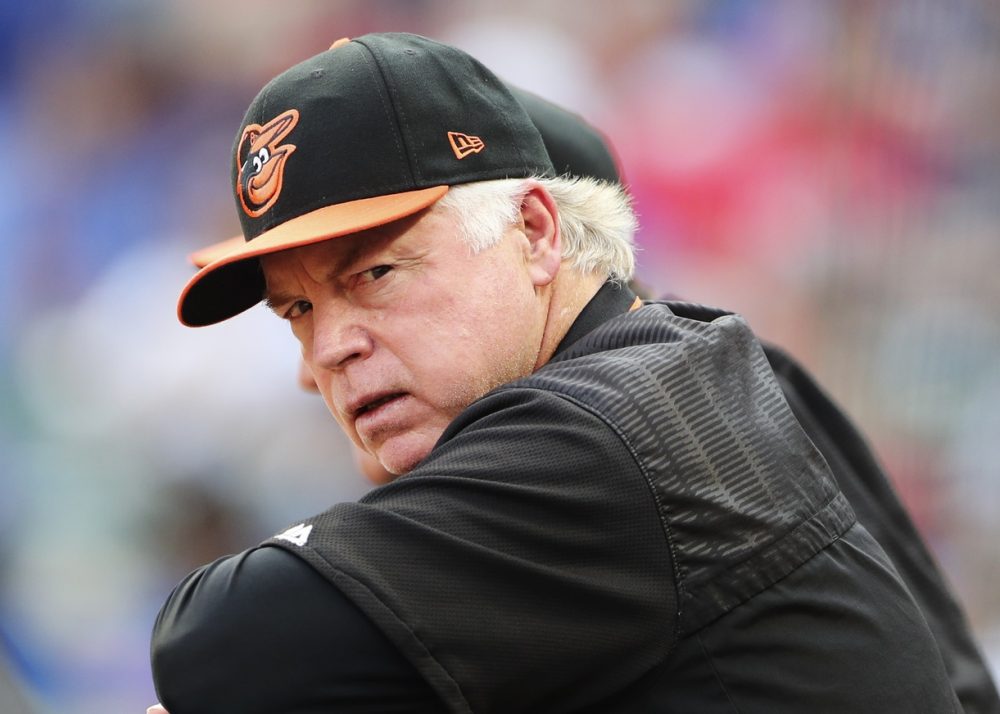 Jeffrey Paternostro: All I know is that when I agreed to do this preview, Gabriel Ynoa was listed as the Orioles’ no. 3 starter on our depth charts. Since then they’ve signed three arms (Alex Cobb, Andrew Cashner, Chris Tillman) that are all probably better than him. And Ynoa took himself out of running for a starting spot with a bout of shin splints that sidelined him for a couple weeks. So what am I still doing here, Jarrett?

Jarrett Seidler: I guess the Cespedes Family BBQ boys were busy and we’re the next best thing for comedy? Anyway, we’ve got the most Orioles rotation to ever Oriole—a collection of five guys with theoretical high-end upside who are most likely just around or a little better than league average, and who all have major health concerns. And the depth is, well, Ynoa when he’s healthy again, and, uh, Alec Asher? There was a good reason you thought Ynoa was going to make this rotation before they signed three starters late, after all.

Did you hang your Player’s Weekend jersey up, yet?

Paternostro: I just put together a big Amazon order to try and organize my house in between Futures Guide edits and the minor-league season starting up. So that gives me one more weekend to get it up thanks to free two-day shipping. I did finally remove the jersey from it’s precarious position on the back of the office chair I don’t use and onto a proper hanger in the closet.

I don’t know if this Baltimore team is bad enough to be funny, though. It’s very, very Oriole as you said, but I think we should give them props for sort of going for it?

Seidler: PECOTA, even after all the late revisions, thinks they stink more than enough to be funny: 71-91, third-worst in the American League and worse than several of the outright tanking teams. Of course, as Buck Showalter likes to point out, PECOTA never believes in the Orioles, they always at least half-ass go for it anyways, and they’re almost always respectable to pretty good! Let’s just say our projections really, really don’t believe in Tim Beckham or Alex Cobb being any good, or any of the breakout candidates breaking out, or any of the veteran stars being both healthy and good.

Paternostro: One of the main reasons Baltimore has outperformed PECOTA is strong success in close games due to us underrating their bullpen talent and bullpen usage. That strategy looks dicier this year with Zach Britton out for most of the season, and potentially two Rule 5 relievers making the Opening Day bullpen. Might be up to the lineup to out-hit the pitching staff this year.

Seidler: The bullpen looks a lot better on Roster Resource, with a three-headed Brad Brach/Darren O’Day/Mychal Givens monster still anchoring some decent depth, than it does on PECOTA’s depth chart, which has something called a Stefan Crichton seeing significant time. He is a mystery to me and, probably, the Orioles. (I actually know who he is because of course I do, but it’s a better joke this way.) And Britton’s supposed to be back around the break, no? Maybe they’ll be the team that finally signs Greg Holland.

Paternostro: If you aren’t in Jarrett’s 85-person, 24-team Scoresheet league, Crichton is—get this—a 95-and-a-slider guy. I am not in that league and I had him originally pegged as the literary upmarket Crichton brother penning coming-of-age novels set in Colonial Australia.

Seidler: Crichton is not owned in my 85-person, 24-team Scoresheet league, for the record. Although given that most of the other owners read this stuff, he might be soon.

Paternostro: I can’t imagine there is a ton of upside for him, past maybe a three-picture deal with Merchant Ivory (I should actually know if they are). And this is an Orioles roster betting on a lot of 90th percentile outcomes to get them in playoff contention. That could work fine on the pitching side—except for the nine out of ten times it doesn’t, of course—but I’m a bit puzzled at starting Colby Rasmus over Austin Hays based on that principle. I think we are lower on Hays than the industry consensus, but there is a very real plus regular outcome for him in 2018. I don’t know if that’s still true for Rasmus.

Seidler: It’s really weird because they called up Hays for basically no reason last year, so he’s on the 40-man roster and he’s got service time now, and they even had another spot open short-to-medium term when Mark Trumbo went down. It’s not even just Rasmus playing over him, it’s effectively some combination of Pedro Alvarez, Danny Valencia, and Craig Gentry, too. Toss in that they’re carrying Chance Sisco as … Caleb Joseph’s backup, really? One starts to wonder.

Paternostro: The Orioles do tend to lack an internal consistency. I suppose it’s part of their charm. Speaking of which, Manny Machado is apparently off the trade market for now and their starting shortstop. I’m not an advocate of tanking™,  but the Orioles’ farm system isn’t much to write home about, and dealing Machado is their best chance at a reasonably quick reload. It does feel a bit like this iteration of the Orioles is just playing out the string, and there isn’t a cohesive idea of what comes next.

Seidler: It seems like everyone has given up on the idea that they might sign Machado long term, and honestly I don’t really know why. Peter Angelos and Dan Duquette are both willing to sign massive star contracts sometimes, and their unwillingness to move him for less than extreme value would tend to indicate they consider the possibility of re-signing Machado as significant. Obviously, they should, and obviously, they probably can, but it’s weird how “they signed Chris Davis” turned into a thing about how they couldn’t or shouldn’t sign Machado instead of an indication that they’ll open up the checkbook when ownership feels it’s appropriate.

Paternostro: It takes two to tango, though, and Machado is going to have suitors that are in much better positions to compete than the Orioles come Opening Day 2019. I admire Angelos’ willingness to pay market rates for these players, but it’s going to be a hard sell to convince Machado to bat between Jonathan Schoop and Trey Mancini, when he can ply his trade between Aaron Judge and Gary Sanchez, or Corey Seager and Cody Bellinger. And the Orioles certainly can’t outbid those teams. They do have the best hat in baseball for my money. Love a tri-color design. Maybe that swings the pendulum.

Seidler: We’re also assuming the free agent market unborks itself between now and November, which … yeah. If they don’t re-sign Machado, where are they going after that? Two of their top prospects are already pretty much here, and is there any more serious help on the way?

Paternostro: It’s an improving system, which is the nicest thing I can say about it really. Ryan Mountcastle could be an impact bat, but they are still figuring out where to play him, and he’s likely more of a 2019 ETA. Cedric Mullins is cool, and closer to the majors, but he’s more cool than plus and needs to be hidden against lefties. Past that it’s a mix of back-end arms, hard-throwing future relievers, and corner guys with hit tool questions—the usual menagerie in a mediocre system. Of course, the Orioles’ unwillingness to play ball in the international prospect market has hurt them for a decade now as well. It’s a weird spot to be in, because the window is closing on a series of teams that weren’t supposed to be as good as they actually were.

We are looking toward the past and the future a lot, and this is ostensibly supposed to be a 2018 preview. I gather you aren’t very bullish on their Wild Card chances?

Seidler: There are quite a lot of Wild Card contenders in the AL, and there’s no reason (unless you buy wholesale into our projections) that the Orioles can’t be an 83-win team—that’s literally where we see the second AL Wild Card as of today. Realistically, it’ll probably take a few more wins than that, and they need a lot of questionable health guys to stay healthy and probably a breakout or two. For example, we’re projecting Machado as a 3.1-WARP player, and he very easily has the upside to double that, if he stays healthy and if he finally has the offensive breakout for which we’ve been waiting.

This roster is littered with lesser versions of that, from Dylan Bundy to Kevin Gausman to Jonathan Schoop. Maybe Chris Davis plays back to his peak. Maybe Beckham and Cobb aren’t about to fall off a cliff. There are too many maybes to rule them out, and there are too many maybes to predict them. They’re in that dreaded in-between zone that “the process” is supposed to avoid.

Paternostro: Sometimes those teams make the playoffs, though I see it as a tough ask with almost 40 games against the Red Sox and Yankees, while the Angels and Twins have an easier schedule on which to feast. I don’t think there are any bad teams in the AL East, at least until the Rays sell off anyone interesting at the deadline for a platoon second baseman who might actually be a first baseman but can also play left field. But this feels a bit too much like doing the Mike and the Mad Dog over/unders where we silently go month-by-month through the schedule over long stretches of dead air.

Paternostro: Mind you the dead air on our podcast tends to come when we are looking things up on Baseball-Reference like: “Has Danny Valencia ever been a Ray?”

Seidler: So, about the over/under. Odds Shark has the Vegas line at 73 wins. Over or under?

Paternostro: For entertainment purposes only, I like the over here. I think they end up a couple games under .500, though. Buck was right.

Seidler: Same, and I wonder the extent to which PECOTA itself moved that line. It just feels like a moderately better team than that, but perhaps I’ve been sucked in by big names and former top prospect upside.

Paternostro: Gabriel Ynoa is a siren’s song to us all.