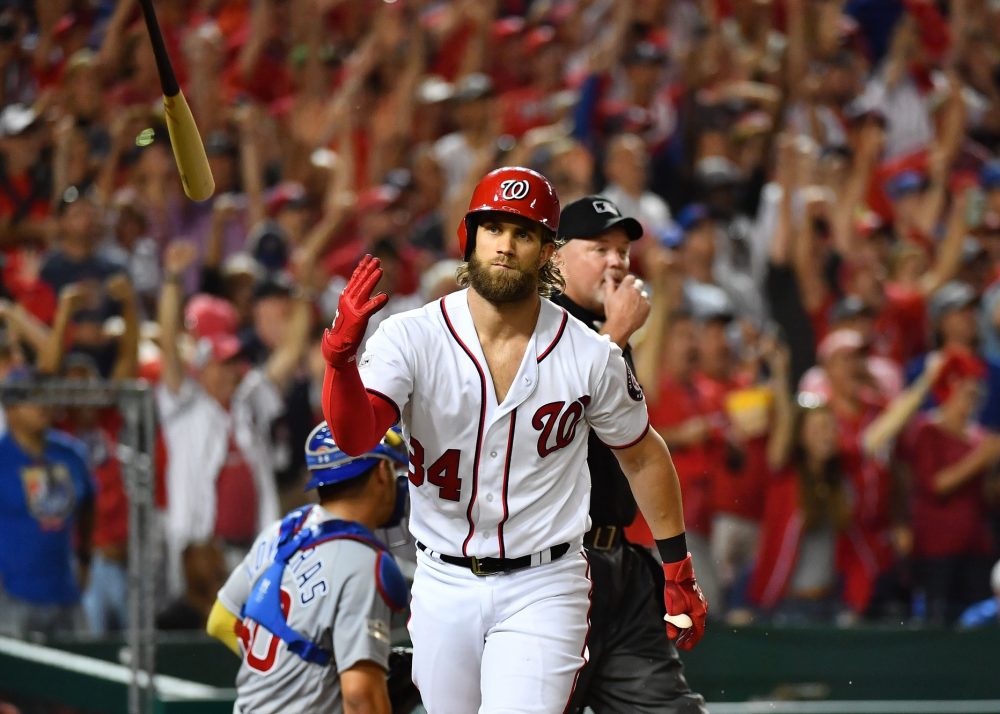 Bret Sayre: Has there ever been a good team with this boring of an offseason? They basically brought in two guys who most people already thought were out of the game (Miguel Montero, Joaquin Benoit).

Craig Goldstein: That is a loaded question given the state of the 2017-18 offseason. Still, I’m shocked to find out Montero is still out here doing things.

I’m not sure the placidity of the offseason will loom as large for anyone as it will for the Nationals. They’re almost undeniably the best team in the division, but the Mets have quietly had a strong winter—not to the point that you’d take them over the Nats, but they’re probably closer than they should be?

Sayre: They’re definitely a lot closer than they have any business being, but it’s easy to say that in March before half of their pitchers get hurt. And yeah, it’s true that the upgrades the Mets made (Jay Bruce, Todd Frazier, Jose Reyes, Jason Vargas) would not have clear roles on this Nationals team. However, while there’s some depth in the Nats organization, the offense is not exactly full of 160-game hitters.

Speaking of not-160-game hitters, Michael Taylor was a surprise breakout star last year, but PECOTA isn’t buying it. He’s also already battling another oblique injury. Victor Robles, on the other hand, is one of baseball’s elite prospects and is projected for 0.8 WARP in just over 200 plate appearances. Do you think last year’s breakout star should make way for this year’s?

Goldstein: In one sense yes, and in another, no. How’s that for a hedge? On the one hand, I’m not convinced that Taylor is a consistent regular rather than a useful fourth outfielder. On the other hand, the Dodgers, Astros, Cubs, and others have shown us the value of depth over the course of a full season, and it makes some sense to let Taylor falter before pulling the trigger and turning to Robles. It’d make it easier for Taylor to accept a backup role (assuming Adam Eaton and Bryce Harper stay healthy) if he actually fails first.

I don’t know that I’m as pessimistic as PECOTA is on Taylor in general, but a reduction from his .486 slugging percentage wouldn’t shock me, and if that occurs, it’s hard to see him as a regular. What would you do here?

Sayre: I’d give Taylor a real chance to fail. I don’t think this is the type of situation that causes us to rage against the service time machine, for two reasons. One, and not to discount how exciting of a prospect Robles is, but he’s played just 37 games in the upper minors, including none at Triple-A. Could he handle major-league pitching now? Probably enough to play every day, but not enough that you supplant a four-WARP center fielder without at least letting him show you he’s not a four-WARP center fielder. And that’s really the crux of the second point. This isn’t a Ronald Acuna vs. Lane Adams situation. Whether you think Taylor broke out or just had a fluke season, the Nationals need to find out as best as they can before shifting into the Robles era.

Of course, one of the things this organization has done extremely well over the last decade is creating eras and plugging holes with talent from the farm system. It started with the Harper and Strasburg eras. Since then, they’ve been able to elevate the likes of Anthony Rendon, Trea Turner, and Tanner Roark to play large roles; and last year when injuries struck, they turned to the aforementioned Taylor and Wilmer Difo, who helped reduce the pain of missing Turner and Daniel Murphy at times. Who, aside from Robles, are going to be the young reinforcements coming from the minor leagues in 2018?

Goldstein: Given all the talent they’ve either graduated or turned into major-league players via trade, there’s just not nearly the depth of upper-level talent in the upper minors anymore. I know you and I actually like the Nats’ system a bunch, but the vast majority of that talent lies in the lower minors (outside Robles, as we said). I think it all comes down to Erick Fedde for this season. He’s about ready as a pitcher, despite the shift to the bullpen and back, and the Nats will have need of his services given they may have Edwin Jackson in their plans (sorry, Bret).

The recently signed Jeremy Hellickson gives them more options in the rotation, but it shouldn’t surprise if Fedde gets an extended run at some point this season, and he’s got a chance to survive thanks to a four-pitch mix led by a slider that can miss bats (but probably needs to do so a little more consistently).

I kinda feel like this season isn’t even about 2018 for the Nats. It’s really about what’s coming next: Harper is a free agent in 2019, as are Gio Gonzalez and Murphy. How do you see the Nationals balancing their competitive hopes in the here and now with making sure they’re still top dog after this next offseason?

Sayre: As crazy as this sounds coming out of my fingers, I don’t think there’s an organization better equipped to lose an offensive superstar than the Nationals. Even if this is both Harper’s and Murphy’s swan song, they’ll still go into 2019 with potential All-Stars at a minimum of four offensive positions and still have the double aces in Max Scherzer and Stephen Strasburg. Combine that with their ownership’s willingness to spend, the roughly $40 million coming off the books (of which maybe a quarter will be eaten up by increasing arbitration salaries), and the high-end talent still to come 2-4 years down the road, the 2018-as-last-gasp folks don’t really have much of a leg to stand on.

In some ways, that makes 2019 easier than mid-2018 if some of the wheels come off, as they’re really maxed out in terms of financial obligations right now and their upper minors are a bit barren. Yet, it does cause us to ask just how long the Nationals can get away with spending top dollar on the free agent market, while backfilling with high-end homegrown talent. I know we love Juan Soto, Carter Kieboom, and Seth Romero (on the field, that is), but this team looks a lot different with a more normalized hit rate on their amateur expenditures and prospect acquisitions. Does this offseason’s data point, when it comes to free agent spending, make it more likely that the Nationals can continue the approach they’ve taken—especially with their reputation of being a good bailout spot for Scott Boras clients?

Goldstein: It’s probably something that won’t be settled until the 2019-20 offseason, but possibly so. Next year is going to be a free for all, with a ton of articles talking about how this offseason wasn’t actually a problem, but was just an aberration. I suspect the Nats come away with someone significant, too, given the money you mentioned coming off their books. (Manny Machado as a shortstop just to infuriate O’s fans or maybe a Dallas Keuchel to build a super rotation?) It’s fun to think about, though: the Nationals’ Moneyball is … spending money on talent. Go figure.

But let’s talk more about the here and now. The Nats won 97 games without Eaton most of the year. That’s a three-WARP player added to the fold, and somehow PECOTA still has the Nationals at 88 wins. Even if you factor in some regression from 97 wins, that feels low. What gives?

Sayre: It definitely feels low, but the problem is that most of the current group of superstars on the team aren’t projected to have difference-making value. Yes, part of that is naturally inherent in any projection system, but take Scherzer and Strasburg for example. The former is projected for 4.1 WARP, and he’s been easily above that figure for each of the last six seasons. The latter is projected for 3.9 WARP, which would be his second-lowest in that same six-year span (and he’d have surpassed that figure in 2015 if he’d just gotten to 160 innings, a number he’s projected to eclipse this year). Then there’s Harper, whom PECOTA thinks isn’t even the best offensive player on his own team, which feels overly harsh.

It’s not hard to find the areas that dinged them the most and it’s even harder to see them sticking with any replacement-level (or below) options for a full season anyway. Matt Wieters will either be better or replaced. Ryan Zimmerman probably won’t be as easily swapped out, being the original Face of the Franchise and all, but the odds of him actually picking up 500-plus plate apperances and being a smidge above the red are very small.

The division should also be improved on the whole from last year. Yes, the Marlins put a pretty good major-league team to the torch, and they’re now staring down 3-4 years of cellar dwelling, but the Phillies and Braves are one step closer to contention, and the Mets are healthier and deeper (for now).

All of these are factors, but since I’m not blessed with either a long memory or a perfectly objective eye, I’d peg this team for 95 wins and an easy return to the postseason. Only problem is that, in the final known year of Harper in a Nats uniform, anything short of a World Series title is going to be a gaping failure. Where do you think they finish in wins, and do you think they should be favored in the National League?

Goldstein: I think in the 92-95 range sounds about right. As much as I’ve been talking about the quality of the team, there is relatively minimal depth all around, and a few players who almost always miss a little time. Hellickson and Jackson are fine depth pieces, but the second they become guys who need to make reliable starts, there’s concern. And given A.J. Cole is the fifth starter right now, that time might not be far off. I think the lack of depth keeps them from being favored in the NL. I’ve got them behind the Dodgers and the Cubs, which is more a reflection on the Dodgers and the Cubs and their combination of high-end quality and depth than it is a reflection on the Nats, who are quite good.