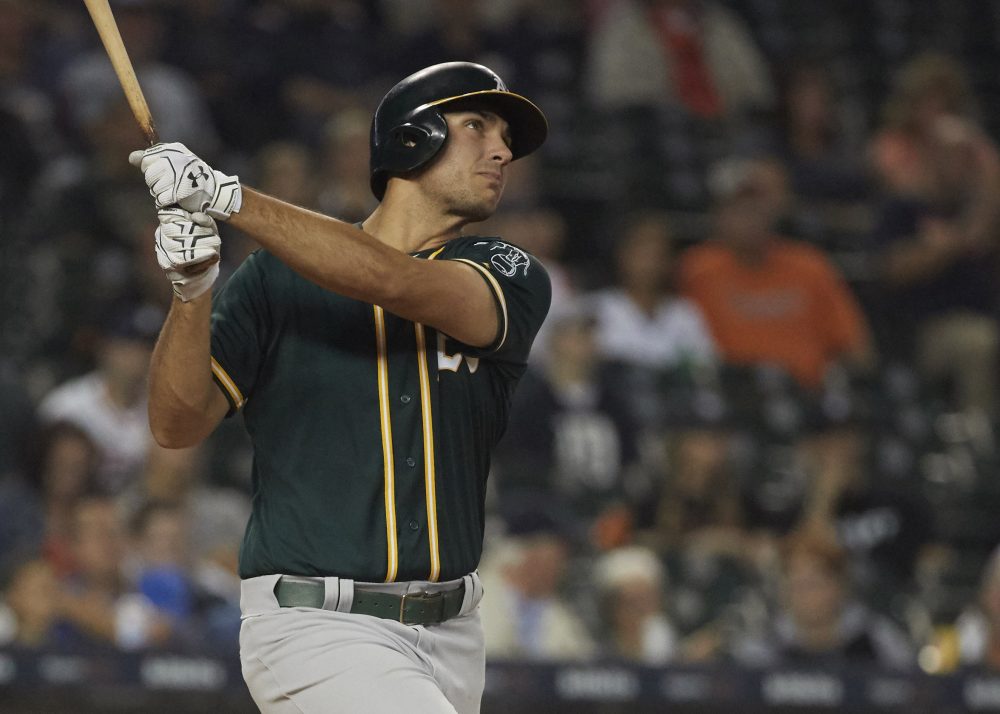 Ashley Varela: In 2017, the Athletics finished last in the AL West for the third year in a row. In 2018, PECOTA seems to think they can dig themselves out of that hole and tie with the Rangers for a coveted 76-86 record and fourth-place finish. There might be reason to believe they can improve on those modest expectations, however, especially with a crop of young talent that has looked more than capable of handling major-league duties of late.

Given the emergence of All-Stars-in-waiting like Matt Olson, Matt Chapman, and Franklin Barreto, among others, are the A’s capable of rising above that projection? Is there finally hope on the horizon?

Jason Wojciechowski: I think the A’s are quite capable of beating that number if the kids are indeed alright. Chapman is maybe the most intriguingly weird case: He played 84 games last year, so a fun game for us to play is “double everything.” If his 2018 is just 2x his 2017, then we’re looking at 30 homers, 50 doubles, 180 strikeouts, and 5.5 WARP premised on plus-25 defense at third base. And 0-for-6 on stolen bases, because what’s life without a little reckless baserunning? That is the kind of performance that can push a team toward .500 or beyond, but the 180 whiffs could be low, if anything. This is a guy who struck out nearly 30 percent of the time in Double-A.

The encouraging thing about Chapman is that this is a fun profile. Whiffs and sprinting around like a sugar-addled 6-year-old on November 1 and elite defense on the infield add up to baseball joy, at least when he’s not redassing his way into fights, which isn’t something the A’s have had a lot of lately, win or lose.

Varela: Given that PECOTA pegged Chapman for 32 home runs and 173 strikeouts this year, I’d say the “double everything” game might just work out in everyone’s favor—especially if he bucks the trend and bags those four stolen bases (I mean, we can dream, right?).

Others aren’t quite so lucky. Olson is coming off of a monster breakout performance of his own, one in which he slugged 24 home runs and racked up 2.3 WARP during the final months of the 2017 season—but PECOTA seems to think he’s due for a regression in 2018, one that will only see another 2.3 WARP in what should be his first full season in the majors. It seems like it’s only a matter of time until big-league pitchers start adjusting to Olson’s hot-and-heavy approach, but is there something more we should be expecting from him?

Wojciechowski: If there’s anywhere to bet the over on PECOTA, I think it’s with Olson. Which is not to say I’m that confident that Olson will do better than the .232/.336/.472 line PECOTA has him projected for. His propensity for the swing-and-miss didn’t get him into Chapman’s 30 percent range, but he still put up averages like .225, .249, and .235 in the minors. It’s easy to see what PECOTA sees.

On the other hand, it’s also easy to pound our fists and shout “are you nuts?!! He slugged .568 in Triple-A and .651 in the majors! He hit 47 homers! Where do you get off with a .472 slugging projection?” I’m of a mind to split the difference and dismiss PECOTA as a dream-buster par excellence while also dismissing Olson’s weird 24 homers-to-two doubles ratio in the majors last year as the kind of fluke that leads to regression: he’ll slug .550, leveraging his raw power and his patience to rip the ball when it’s presented, but he’ll also have long-arms problems, where pitchers with the right stuff and command will bust him up, taking advantage of the natural holes that a hitter with his length will always have to contend with. Richie Sexson with good defense is a damn good ballplayer, though.

That’s the corner Matts. You also mentioned Barreto; is there star upside here?

Varela: I read somewhere that Barreto is considered the A’s future “Jose Altuve”—and while that may be laying it on a bit thick, there’s no reason to believe he won’t blossom into a solid middle infielder given enough time and opportunity to do so. He tore up Triple-A in 2017 (.290/.339/.456 with 15 homers and 2.7 WARP) and is working on replicating those numbers during his explosive run in camp this spring. That said, he’s struggled to overcome nagging contact issues and a truly abysmal strikeout rate—he generated 33 whiffs in 76 major-league plate appearances last year, in case you’d forgotten—so it’s difficult to brand him as anything close to an Altuve replica. On the plus side, he’s just 22 years old and already a legitimate Triple-A threat. He could be a star yet.

It seems pretty clear that the homegrown talent is poised to lead the way this year, particularly with all of the potential 20-homer sluggers clustered around the middle of the lineup, but the A’s still found a few areas to improve over the offseason. Stephen Piscotty found his way to the outfield via trade; he’s a former first-round draft pick whose decent glove work and consistent on-base production papers over a lack of power. It’s also worth noting that this deal was about more than just upgrading the A’s right-handed outfield candidates—Piscotty relocated to California to be closer to his mother, Gretchen, who was diagnosed with ALS last year.

Behind the plate, meanwhile, the A’s shored up their backstop options with Jonathan Lucroy, inking the veteran All-Star to an extremely team-friendly one-year, $6.5 million deal. Granted, the Lucroy the league saw in 2017 was just a shell of the 5.7-WARP contributor they enjoyed in 2016, but he figures to be a much more stable everyday presence than Bruce Maxwell would have been.

While these looked like smart moves on the surface, is there more the A’s could have done to transform a group of hopefuls and hot prospects into legitimate contenders this offseason?

Wojciechowski: Piiiiiiiiitching. Pitching. PITCHING. I think what I’m trying to say here is they could have added some pitching.

By “could have” I don’t necessarily mean “could have within the budgetary restrictions they have while also adding Piscotty and Lucroy,” because if the Alex Cobbs are out of the A’s price range, there’s no point looking at free-agent pitching at all.

And when I say “pitching” I should note that they did make over the bullpen, adding three arms (Ryan Buchter, Yusmeiro Petit, Emilio Pagan) this winter who should contribute after making two in-seasons addition last year (Blake Treinen, Chris Hatcher) who are held over.

But what I’m getting at here is that the rotation is Sean Manaea, whose upside is “hey, he’s not bad,” Kendall Graveman, who tops out at “sure, why not,” and then anywhere from 5-9 fifth starters. (Jharel Cotton got hurt, but after last year’s fiasco, I’d have put him in the fifth-starter pool anyway. Paul Blackburn is hurt now too. And if you thought hot prospect A.J. Puk was going to come to the rescue, well … hurt.)

Am I too pessimistic about these guys? Or did Billy Beane and David Forst maybe go out and build a 21st-century bullpen that’s going to pitch 50 percent of the available innings and power this team to glory?

Varela: Billy Beane is already living in the year 3018, man. He doesn’t need a “starting rotation” or “Alex Cobb” or “pitching prospects.” (I guess we can unironically leave the air quotes on that last one.)

In all seriousness, this looks like a wildly unbalanced team. Even with a shiny new bullpen and a handful of sizzling bats, it isn’t hard to imagine that a lot of their talent will be wasted cleaning up the mess made by a sub par rotation … and the A’s newest reclamation project, Trevor Cahill.

Should they have done more to move the needle this winter? Probably, if their goal was to contend come October. But the division title has been preemptively claimed by the Astros, and the Mariners, Rangers, and Angels won’t be easily toppled this time around. Just because Beane and Forst don’t throw the word “rebuild” around doesn’t mean that’s not what’s happening here.

You mentioned that the A’s are capable of beating PECOTA’s projected 76-86 record this year, assuming everything shakes out in their favor. What is it that buoys your hope for something better, and where do you see the team ending up in 2018?

Wojciechowski: Well, just first of all, I decline to acknowledge Cahill‘s existence or the strong likelihood that he finishes the year as the team’s best starter. I just refuse. I further decline to acknowledge that his old running mate Brett Anderson is waiting in the wings for the inevitable injury, failure, and catastrophe in the starting rotation that will allow him to ascend to Oakland for one last run at [in]glory.

With that said, here’s where I see the possibility for more: Olson puts up four wins, instead of just two; Marcus Semien is a three-win player, as he’s been the last two years (just with last year cut in half by injury); Piscotty bounces back to his 2015-2016 level, and adds a win to his projection; Dustin Fowler is not just a replacement-level player, which is where PECOTA has him; same for Barreto, after he takes over for Jed Lowrie midyear; and manager Bob Melvin leverages the interesting bullpen arms to cover for the weaknesses in the rotation, maybe close to a Rays-style pitching staff.